Comic Books to TV: 10 Echoes of X-Men in FX’s Legion

How much of the X-Men comic books can you find in the new series? Here are some possible traits to look out for. 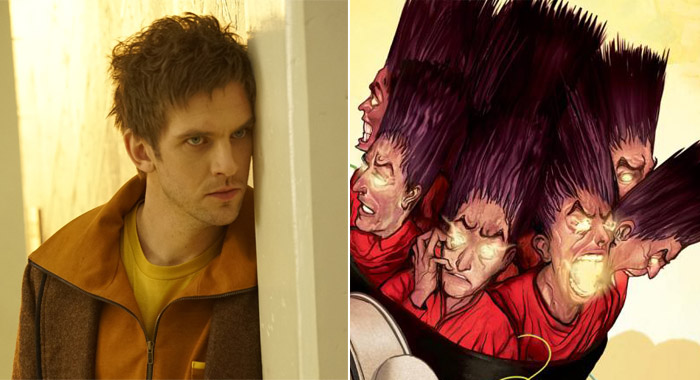 In many of the interviews leading up to the premiere of FX’s new X-Men inspired series Legion, executive producer Noah Hawley made it clear he wanted to create original characters and stories in the X-Men setting.

“None of the other characters that I’ve surrounded him with are from the comics. It’s sort of an invented world,” Hawley told Variety.

With the premiere last Wednesday, it is clear he succeeded — established X-Men comic book character David Haller (Dan Stevens) stands alone among new faces and is placed in a setting that, while familiar, appears new for an X-Men screen adaptation.

Nevertheless, there are many echoes of the source material, and the books may offer some clues to where David’s journey will lead.

Spoilers ahead! The following discussion contains plot details from the X-Men comic books that may foreshadow events in FX television series Legion. 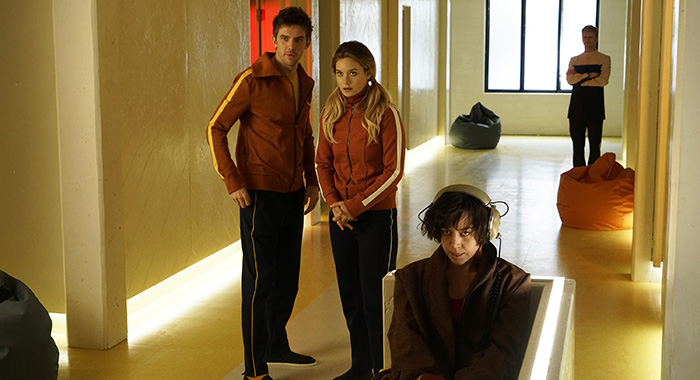 Though the series appears to be set in a timeless now, the art direction, costumes, and musical choices harken back to the 1970s, one of the great heydays for the X-Men as a comic book series. Though it debuted in 1963, the title began to reprint older stories starting with issue #67 in 1970 and briefly ceased publication after issue #93 in 1975.

At the same time, writer Len Wein and artist Dave Cockrum reinvigorated the concept with a new line-up of characters like Storm and Wolverine in the pages of Giant Size X-Men #1. The regular series resumed with issue #94 in August 1975. Writer Chris Claremont (who would go on to co-create Legion in 1985) took over the title and, with collaborators like Cockrum and John Byrne, established much of the X-Men world as we know it.

Nowadays, the effort would be called a “soft reboot,” and it proved to be quite a success; particularly with college-aged readers in the mid-70s. By the end of the decade, X-Men was one Marvel’s most popular titles. 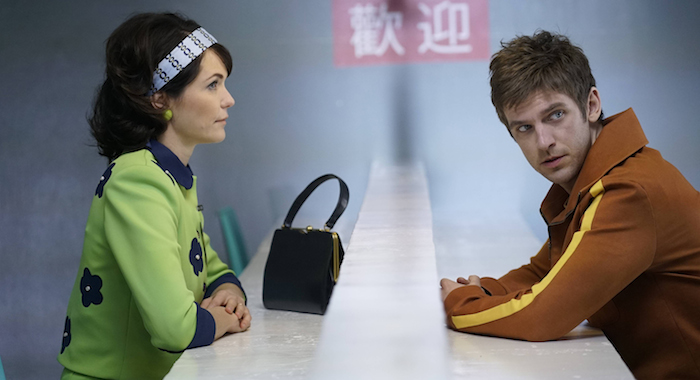 In the pilot episode, the patients at Clockwork Psychiatric Hospital sport jackets with a distinctive yellow stripe along the arms. Though quite stylized, it is easy to see the inspiration from various X-Men uniforms across its 50+ year history; particularly the fashion-conscious look of Grant Morrison’s New X-Men in the early part of the 21st Century. At the time, Morrison wanted to turn the individualized costumes of the characters into a unified school uniform. He also hoped the designs by his frequent collaborator Frank Quitely would become a line of official Marvel clothing. Third-party companies filled the gap, and their efforts are still seen occasionally at comic conventions across the country. Curiously, this yellow is typically referred to as gold in the comics; particularly in the early 1990s, when the X-Men split into “Team Blue” and “Team Gold” in honor of their traditional color scheme. 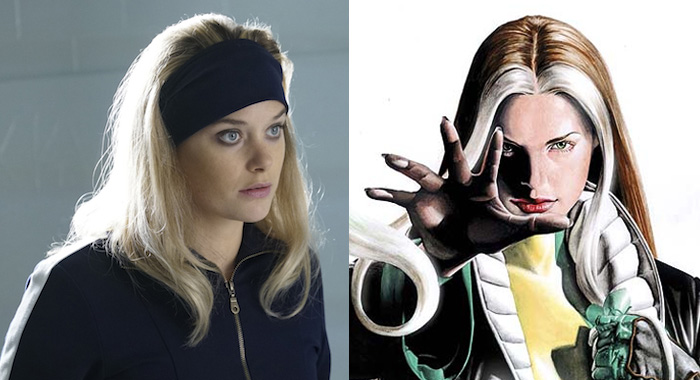 Though Sydney Barrett (Rachel Keller) appears to be an original character with a Pink Floyd-inspired name, her reticence to be touched — and her body-swapping ability — echoes the power and curse of villain turned X-Man Ana Marie, better known to the world as Rogue. Debuting in the pages of Avengers Annual #10, she used her ability to absorb other people’s powers and memories on Ms. Marvel; permanently obtaining flight, superstrength and invulnerability. As useful as these powers proved to the Brotherhood of Evil Mutants, it also left Rogue unable to ever touch another person. In doing so, she would leave her victims in a deep coma even as she gained their abilities.

She eventually traded sides and became an important X-Men character in the early 1990s and in the first successful X-Men animated series. She was also one of the first mutants to appear in live-action in the first X-Men feature. Played by Anna Paquin, her power is both quite evocative of the mutant concept and inexpensive to realize. Well, as long as you leave her Ms. Marvel powers in the pages of the comics. Of course, it remains to be seen if Syd will eventually find herself with Rogue’s distinctive stripe of white hair.

4. The Devil with Yellow Eyes 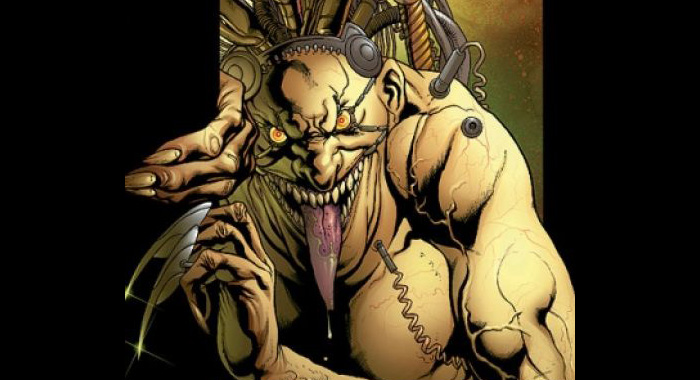 Though it is unclear just what David’s vision of the Devil with Yellow Eyes truly represents, his visual manifestation certainly echoes occasional X-Men villain Mojo, a ratings-hungry reality show producer from another dimension. First appearing in 1985’s Longshot #3 (by Ann Nocenti and Art Adams) as a critique of television network executives, Mojo required a cybernetic platform for mobility. Without it, his organic body bears a striking resemblance to David’s recurring vision — right down to the yellow eyes.

While the visual of the Devil with Yellow Eyes harkens to Mojo, David’s early comic book appearances featured another X-Men villain rooting around in his head: the incorporeal psychic entity known as the Shadow King. Created by Claremont and Byrne, the Shadow King inspired Charles Xavier to form the X-Men following an encounter in Egypt. Many years later, he possessed David in an attempt to claim the body of a de-aged Storm (X-Men stories can get quite complicated.) In removing the Shadow King’s control, David became unstable and ultimately ended up in a coma. 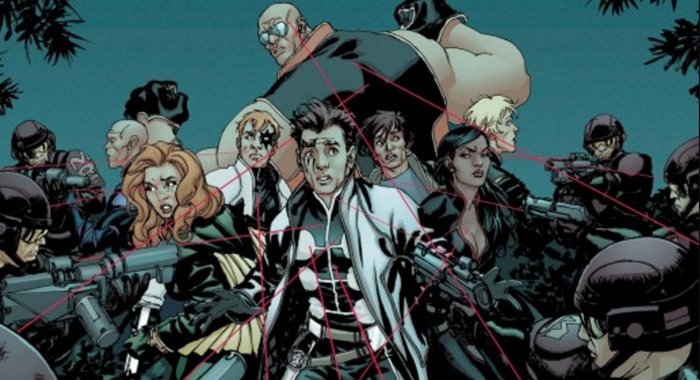 Referenced in a throwaway line by David Selby’s unnamed government agent, Division One could be an allusion to the Mutant Response Division. First appearing in 2010’s X-Factor #204, the MRD was formed by the United Nations after an anti-mutant group attempted to stage a mutant-led terrorist attack. Division One will also look very familiar to General William Styker’s Weapon X program, an initiative to weaponize mutants, in almost all of the X-Men feature films; an element which first appeared in 1991’s Marvel Comics Presents #72 by writer and artist Barry Windsor-Smith. There are also other government agencies across the world — like Canada’s Department H — interested in understand and utilizing mutant powers. Of course, it is still unclear just what Division One’s real aim will be. 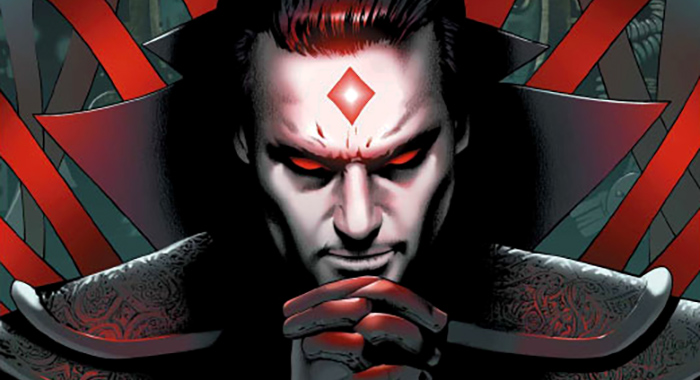 With his milky right eye, preference for wolves, and an uncanny ability to survive David’s explosions of power, The Eye — as he’s referred to in the cast list — echoes any number of renegade mutant researchers in the pages of the various X-Men titles, but his obviously evil countenance most closely resembles geneticist Mister Sinister. Debuting in Uncanny X-Men #221, the vaguely vampiric Sinister was originally intended to be a child’s projection of a bad guy; projected by a mutant unable to mature into adulthood. When that concept was abandoned, Sinister was revealed to be a Victorian scientist given immortality by Apocalypse. In the 20th century, he became obsessed with the bloodline of Cyclops and may have nudged events to lead to the birth of his son, Cable.

Of course, that field of study was not the exclusive province of Sinister. Allies like Moria MacTaggert and enemies like Stryker were all interested in the genetic secret which unlocked incredible abilities. And even if the Eye is no one particular X-Men scientist, his ambitions resonate well into the comic book’s past. 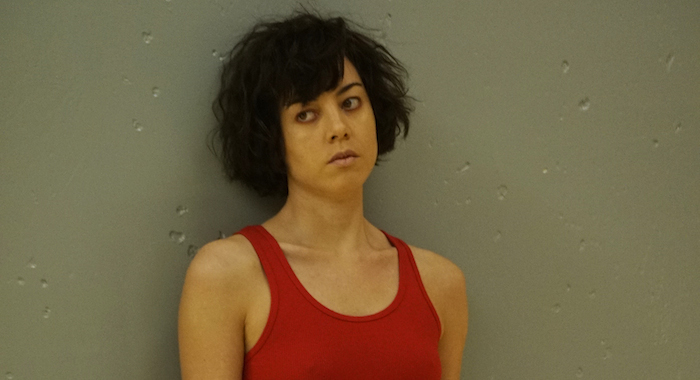 While David’s fellow patient and friend Lenny — played by Aubrey Plaza — is an original character, her place in David’s mind is a well-established part of Legion’s powerset and story.

When David’s powers first manifested during a terrorist attack in Paris, his mind absorbed the personas of some of the victims and even some of the terrorists. Presented as distinct souls David captured via his psychic powers, these other minds eventually grew to control aspects of his abilities and eventually sought to control David’s body on a more permanent basis.

But one persona in particular — a young girl name Marci — came to be a friend and kept David company after one of his other more aggressive personalities killed the real Marci. Thought it is unclear if Lenny is trapped in his mind or just a projection of David’s turmoil, her place in his head is one of the more direct echoes back to the comics.

8. Which Disorder Is in Order? 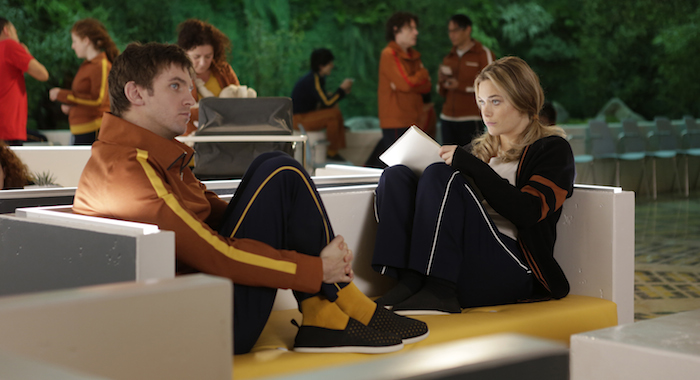 With the constant appearance of new personas vying for control, David’s comic book ailment more closely resembles dissociative identity disorder (multiple personalities). But in the premiere of Legion, his visions represent something closer to schizophrenia. The understanding and nature of David’s underlying issue has changed over the years. In his initial appearances, he was referred to as “The Autistic” — and some of his mannerism in the series echo that early diagnosis — but this was short-lived, as the demands of plot sent the character toward DID. It remains to be seen if the screen version of David will eventually find his disorder more closely resembles something else in the DSM than what he’s been told, but hopefully the series will clearly define it and stick with it. 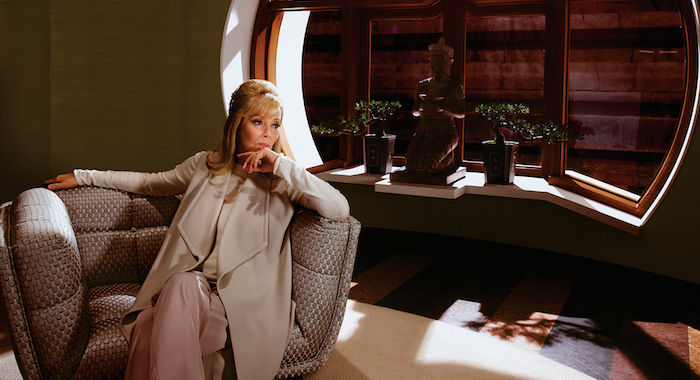 In their brief moments in the pilot, Ptonomy Wallace (Jeremie Harris), Kerry Loudermilk (Amber Midthunder), and Melanie Bird (Jean Smart) certainly seem familiar to readers of X-Men comics. As a super-powered strike team led by an older and seemingly wiser leader, the parallel to the X-Men seems obvious, even as the characters appear to be brand new. If nothing else, Kerry seems to have the X-Men power-stride down.

Meanwhile, Melanie Bird appears to be a stand-in for Professor Xavier — at least in the mentor role. In various articles leading up to the premiere, she has been described as an unconventional therapist, which once again conjures up the echoes of the various mutant researchers like Moira MacTaggert and Mister Sinister.

Also worth noting is her repeated use of the word “son” when talking to David. While a more common epithet in the 20th Century, the use of it nowadays usually suggests a more familial connection in the grammar of scripted television. Of course, that could just be more of the 1970s bleeding through and cementing her role as mentor or else an indication of something deeper.

10. In a World That Hates and Fears Them 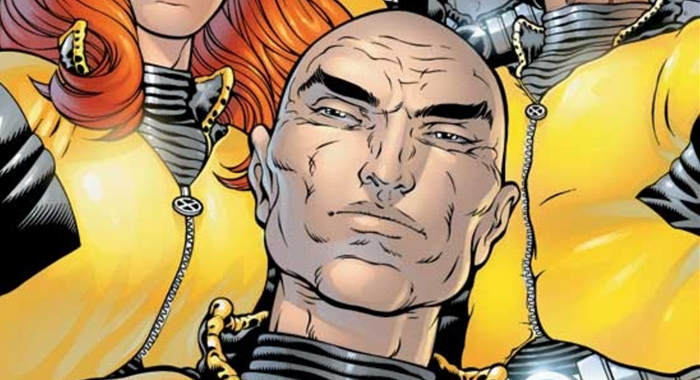 Other than that use of the word “son,” the pilot offered no clues to David’s parentage. Though David Selby’s character refers to David as the most powerful mutant they’ve encountered, what of the world’s most powerful telepath? While the notion of a mutant does not seem new Selby or his team, it is unclear just how common mutants actually are in the world. In the pages of X-Men, the covert nature of their work varies from writer to writer, with Xavier initially wanting his brightly suited X-Men to defend a world that hates and fears them. Grant Morrison’s New X-Men began with the pronouncement that mutants would soon outnumber humans and Xavier finally outing himself to the world. After subsequent events and creative changes, that number would be reduced dramatically by editorial fiat and the in-story abilities of Scarlett Witch (again, X-Men stories can be complicated), with the surviving mutants retreating to the shadows.

Or, perhaps, the absence of Xavier is a bigger echo than the show is letting on.

After several years away, David returned to X-Men in the mid-1990s intent on traveling to the past and eliminating Xavier’s archrival Magneto before the latter could harm the mutant rights cause. After a series of missteps, David’s trip though time resulted in Xavier dying, leading to an event across all the X-Men titles know as “The Age of Apocalypse.” The alternate timeline saw the mutant despot taking over the Earth because Xavier was not there to form the X-Men. As Hawley himself has pointed out, “With the X-Men comics, there are a lot of alt universes, so that has allowed me some leeway.”

Is it possible David has already played with time to such an extent that his own birth is the greatest anomaly of all?