The autobiographical drama comes from director-producer Ava DuVernay and the former NFL star. 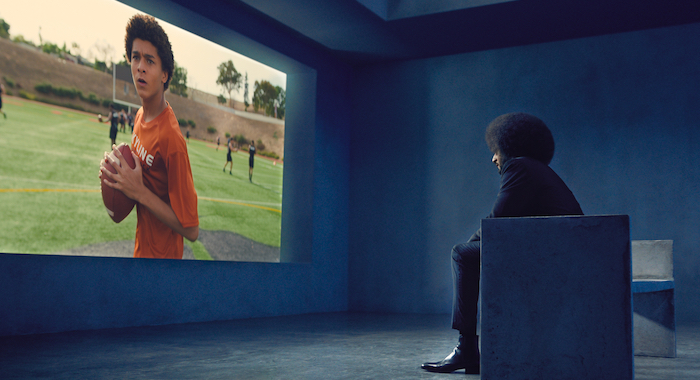 Netflix limited series Colin in Black & White isn’t so much a look at polarities between sides or concepts, but at the melding in between. An autobiography of Colin Kaepernick as well as a history of both blatant and microaggressive racism in America, the series is created by Kaepernick and Ava DuVernay.

The show stars Jaden Michael, who had the heavy task of portraying the NFL quarterback at a time in his life when the man who would become the face of a movement slowly became aware of a world of biases outside of the protective fortress set up by his adoptive parents (played by Mary-Louise Parker and Nick Offerman).

Rotten Tomatoes talked with Michael about portraying a younger version of the activist and about the ways Hollywood also needs to do better in regards to race and diverse storytelling. 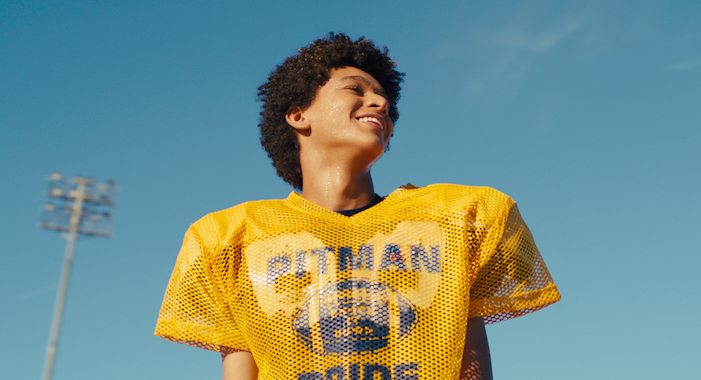 Whitney Friedlander for Rotten Tomatoes: What were the conversations like about what details to include from Colin Kaepernick’s life and how much to simplify for the purposes of storytelling?

Jaden Michael: I didn’t get too far as far as [consulting with writer and executive producer] Michael Starrbury and the writing process, but, from a creative process as far as how much of Colin’s story I wanted to tell, I feel as though a majority of it is true. Some of the situations might have been different or have been adapted to fit the storyline, but as far as how Colin felt in those moments, or how he felt growing up, a majority of it is very accurate.

I think the point of the show is to highlight the inaccuracies that have been created, such as the misunderstanding between the communities. One of my main focuses was highlighting the truth in Colin — not only from a personality perspective and physically as far as the training with the football and whatnot, but also to make sure that the choices that I was making were in line with the choices that Colin was making in real life. 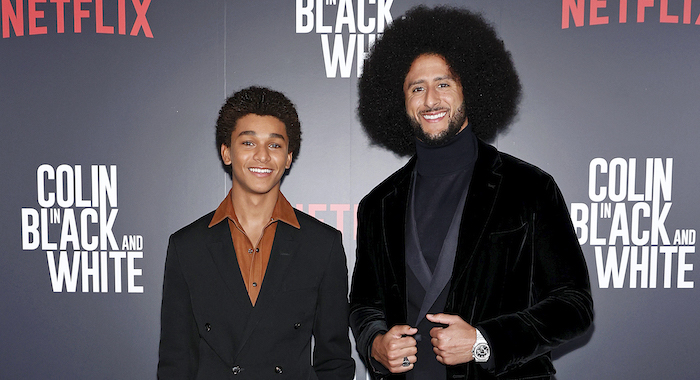 Colin Kaepernick excelled at basketball, baseball and football when he was in high school. I don’t think anyone expects the person portraying him to also be naturally talented at all three sports, but did you have any experience playing sports growing up?

Michael: I never played any sports growing up. I played soccer for like a week. Someone kicked me, and my mom had a panic attack. I never played team sports. I’m a single child, so I liked skateboarding and would surf and snowboard.

What did that mean in regards to training for the part?

Michael: It was a lot of training. We would work almost every day doing workouts and drills, making sure I was you improving and, basically, learning 18 years of three different sports. And then, on top of learning how to play them properly, I also had to learn how to play them like Colin. Colin has his own style and it’s very specific. I spoke with him and said, “I really want to get the sports side of it right. I don’t want any of your friends from the NFL to be like, ‘Yo, that was kind of off what he did right there.'” So, he really helped with giving notes and making sure I was improving and what I could do to improve. It was great getting tips on how to play football from a professional.

One of the most important scenes, for me, was in the first episode where Kaepernick offers a parallel between football (and other professional athletics) and slave trading. Were you cognizant of the idea that athletes are property?

Michael: I didn’t know that 80 percent of the NFL were people of color. but I was noticing that there is an extremely large proportion of people of color in the NFL and there’s [only a few] quarterbacks who are Black. The quarterback is the leader, and how is it that the leaders are almost all white and all the running backs and the forwards are all Black? Is it because we run fast? Is it because we’re strong and we’re big and we’re scary?

And then on top of that there’s the idea of contracting and buying and trading your players and all the general managers are white.

How does that compare to Hollywood, where actors are also commodities?

Michael: I think we try and believe that it’s different, because we’re more progressive and whatnot, but I think it is much of the same. Yes, we have become more progressive. And yes, there are more opportunities for people of color. But look at what those opportunities are; I started to question why the roles I was auditioning for were the gangbanger in the ’70s, and I started looking at my white friends and they’re playing the cool jocks who get all the girls.

I think there is a misunderstanding of the kind of stories that we can make based off of the biases and the people who are in charge of getting those stories to be made. And I think the show can help people put into perspective what it feels like to live the Black or the Brown experience in America. 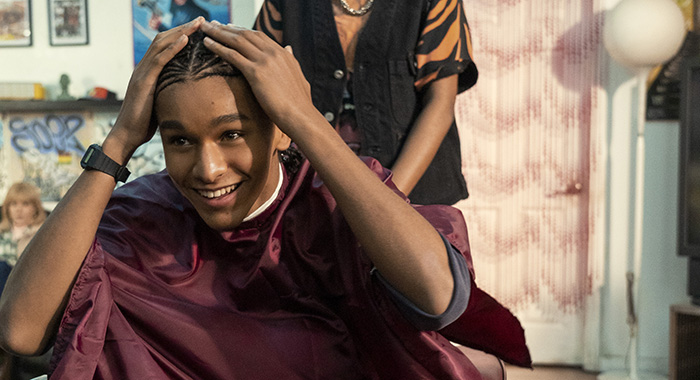 Was there a conversation of whether you were right for this part since you are Afro-Latinx and part Jewish and Colin is half Black and half white.

Michael: I don’t know if that was the conversation being had [with] Ava. I don’t think it was, but it was definitely a conversation on Twitter. But I don’t know how that has any relevance. I thought we finished caring about someone’s looks with Lin-Manuel Miranda; George Washington is Black in Hamilton. If someone has the skills to play the character — if they if they have the performance necessary to tell the story — then there shouldn’t be any issue with them telling the story. If it’s a story that needs to be told, and if person is Nigerian instead of Ghanan, it shouldn’t matter as long as that person can learn about the differences between the two communities and properly emulate them.

Do you think that because you’re a public figure, you have to be more politically and socially conscious?

Michael: I think I have to be more conscious because I have to separate myself from my peers. You have to be 10 steps ahead in order to be noticed. And getting a role is just that much harder. There’s a lot more competition, and the stakes are heavier. I’ve always been the kind of person who wants to learn and the kind of person who wants to know more about a situation in order to be more well-versed and more aware of different opportunities.

There aren’t a lot of movies or TV shows about Dominicans. I don’t want to [confine myself] to only being able to play those stories. And there’s also a side of me that’s Black; there’s a whole culture and slew of opportunities to be learned there. I just played a Jewish role.

So I never want to put myself in a box because of what people expect from me because of how I look or where I come from. 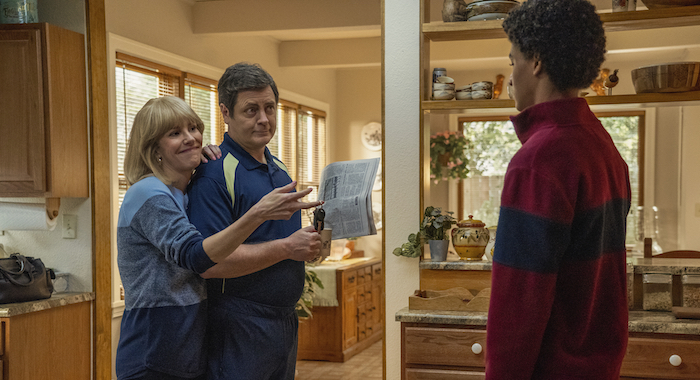 This show also discusses racism on smaller scales, such as conversations about hairstyles and colorism. What did you think about being able to tell those stories?

Michael: For me, it’s always been the small things that are important. If you can scream in a scene, I would scream inside because I always felt like if that was such a more captivating way to tell the story.

And that’s exactly the story that’s being told here. It’s the little things that hurt. It’s your mom calling you a thug. It’s not being able to wear your hair a certain way because of what society will say about you. It’s those little microaggressions that force you into a wall and feel shackled by society’s expectations of you. And the only way you can break free is by separating yourself and forcing a conversation to be had about the subject.

Colin found that the best way to do it was by kneeling. It takes a patriot — it takes a leader — to risk their livelihood, to risk their passion, for someone else, for a conversation for his people to be noticed.

I’m no one to infer on Colin’s purpose or his motivations, but I think that the kneeling isn’t a sign of disrespect. And that’s proven in the fact that he consulted veterans on what is the best way to to still show respect for fallen soldiers and for the military while still getting his point across. He does have respect for the military. 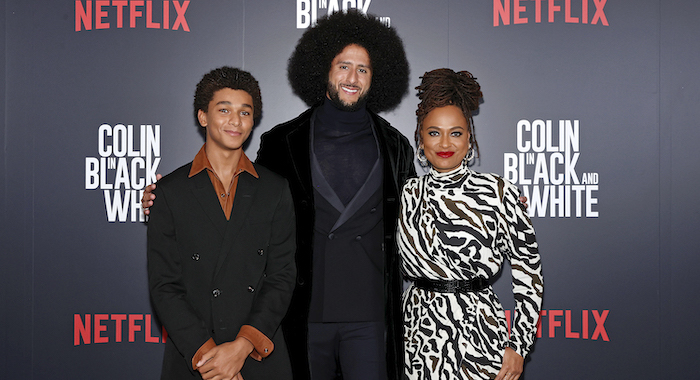 Has there been any talk of you doing a second season?

Michael: You’ve got to ask Michael Starrbury or Ava for that. I know a little bit about his college story, I know that it is very heavy and it is very, very deep, and I think it’s a story that would be beautiful to tell.

Colin in Black & White is available now on Netflix.