More details on Nolan's mystery project plus the rest of the week's big news, including clues to The Batman's key villains and a green light for John Wick: Chapter 4.

This Week’s Ketchup brings you another 10 headlines from the world of film development news (those stories about what movies Hollywood is working on for you next), covering up-and-coming titles like Akira, John Wick: Chapter 4, and Chip ‘n Dale: Rescue Rangers. 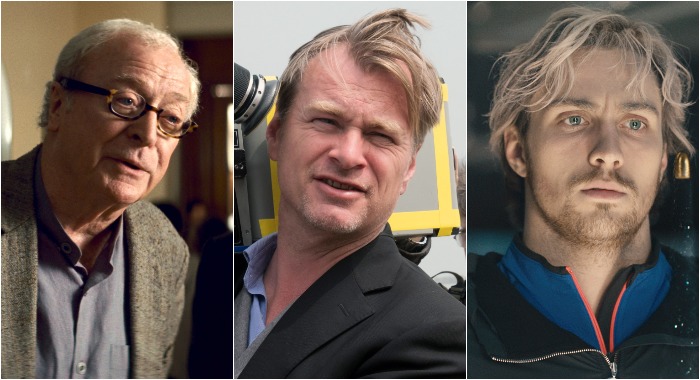 Except for movies like Dunkirk and his Dark Knight trilogy (where obviously we knew it was about Batman), director Christopher Nolan frequently keeps the details of his films relatively secret during the early phases of development and production. For example, both Inception and Interstellar were relative mysteries for a long while (and that’s even though Nolan took over directing Interstellar from Steven Spielberg). This week, we learned that Nolan’s next film will be called Tenet when it’s released next summer (July 17, 2020), which Merriam-Webster defines as, “a principle, belief, or doctrine generally held to be true.” Tenet is described variably as an action epic and/or globetrotting adventure to be filmed in seven different parts of the world. John David Washington (BlacKkKlansman) will lead an ensemble cast including Robert Pattinson (Twilight) and Elizabeth Debicki (Guardians of the Galaxy Vol. 2). That ensemble grew this week with the additions of Aaron Taylor-Johnson (Quicksilver from Avengers: Age of Ultron), Kenneth Branagh, Dimple Kapadia, Clémence Poésy, and frequent Nolan costar Michael Caine. Tenet is scheduled for July 17, 2020, up against Bob’s Burgers: The Movie, the week after Ghostbusters 3 and The Purge 5, and the week before Disney’s Jungle Cruise. Speculation about Tenet is just getting started, including this piece that suggests that the premise may involve time travel.

1. Catwoman, Penguin Named as The Batman Villains, Giving Us a Sense of Deja vu

Since Tim Burton’s 1989 Batman, we’ve seen a few of the villains of Gotham City depicted more than once, including Bane, The Joker, and Two-Face. The Burton/Schumacher villains that weren’t included in Christopher Nolan’s Dark Knight trilogy include Mr. Freeze, Poison Ivy, The Riddler, and The Penguin, but now we’re hearing that one of them will return to the movies for the first time in 29 years. That’s because the two main villains in The Batman (June 25, 2021) will reportedly be Catwoman and the Penguin, which also makes it a de facto return to 1992’s Batman Returns, in which those villains were played by Michelle Pfeiffer and Danny De Vito. No casting has been announced for either role yet, but Frozen star Josh Gad has been posting online about his interest in playing The Penguin for years now.

John Wick: Chapter 3 – Parabellum (89% Certified Fresh) hadn’t even been out for a week when a teaser was dropped for the next chapter in the franchise, titled for now, unsurprisingly, John Wick: Chapter 4. The next film in Keanu Reeves’ high-body-count franchise is now scheduled for just two years from this week, on May 21, 2021. We obviously don’t know what the fourth film might entail (though the ending of Parabellum does suggest some hints). This release date announcement did have one immediate response, however, from Warner Bros., which quickly bumped their animated superhero movie DC Super Pets from May 21, 2021 back a full year to May 22, 2022. The DC Comics superheroes expected to be featured in DC Super Pets include Ace the Bat-Hound, Krypto the Super-Dog, and Streaky the Super-Cat. With this move, DC Super Pets will now come after Joker (October 4, 2019), Birds of Prey (February 7, 2020), Wonder Woman 1984 (June 5, 2020), The Batman (June 25, 2012), and The Suicide Squad (August 6, 2021). There’s no word yet on when Marvel Studios might ever release a Pet Avengers movie.

3. Taika Waititi’s Akira Adaptation Due in Just Under Two Years

There was a time when movie blogs were awash regularly with screeds against the potential evils of a live-action Akira (whether based on the 1988 anime classic, or the original manga novels). Something changed, however, when Taika Waititi (Thor: Raganrok, 93% Certified Fresh) signed on with Warner Bros. and producer Leonardo DiCaprio for Akira instead. The bad news, however, is that Waititi’s fans are still going to have to wait almost two years for Akira, because the film is now scheduled for release on May 21, 2021. Waititi’s film will reportedly be adapted directly from Katsuhiro Otomo’s Akira manga volumes, and will not be a shot-by-shot remake of the anime. In related news, both Waititi and Netflix dropped out this week of the Bubbles biopic about the life of Michael Jackson’s pet chimpanzee.

4. The First Stars Movie Based On a Video Game is In Development

Ever since we first heard that Game of Thrones showrunners David Benioff and D.B. Weiss were developing a trilogy of Star Wars movies, there has been speculation that their films would be set in the Old Republic setting, some 3,600 years before Star Wars Episode I: The Phantom Menace. This week brought an unexpected wrinkle to that theory with the news that a movie based on the popular video game franchise Star Wars: Knights of the Old Republic is now in active development (separate from Benioff/Weiss). Instead, the KOTOR movie is being adapted by screenwriter Laeta Kalogridis, whose produced filmography includes Alita: Battle Angel, Martin Scorsese’s Shutter Island, and the Netflix science-fiction series Altered Carbon. As with the two other Star Wars projects that Benioff/Weiss and Rian Johnson (Star Wars: The Last Jedi) are working on separately, the Knights of the Old Republic movie is described as being the first of a potential trilogy. Kalogridis also now has the distinction of being the first female screenwriter to work on a Star Wars movie since Leigh Brackett cowrote The Empire Strikes Back in 1980. In related news, we learned more this week about Keri Russell’s character in Star Wars: The Rise of Skywalker, as well as more about the Knights of Ren.

With Disney now done with Dumbo and Aladdin, The Lion King coming this summer, and Mulan and Cruella coming in 2020, it’s starting to look like they’ll run out of classic animated movies to adapt as live-action films by the middle of the coming decade. Disney, however, might be way ahead of us, as this week brought news that suggests their next steps could involve adapting some of their popular animated TV series as well. Walt Disney Pictures has begun development of a live-action/CGI hybrid adaptation of the studio’s popular Chip ‘n Dale: Rescue Rangers TV series. The original series ran for a relatively brief amount of time on The Disney Channel (1989 to 1990), but it then entered syndication, where it arguably left a bigger impact and found a larger audience. Akiva Schaffer, of the musical comedy team Lonely Island (along with Andy Samberg), will direct the Chip ‘n Dale: Rescue Rangers movie, which will reportedly have a “meta” angle that’s not an origin story. It’s not yet known if Chip ‘n Dale: Rescue Rangers will debut on the Disney+ streaming service or whether it will receive a full theatrical release.

6. Michael Peña Might Get to Recap What Happens in The Tom & Jerry Movie

After he provided some of the funniest scenes in the two Ant-Man movies, many fans were disappointed to find that Michael Peña’s Luis wasn’t one of the supporting characters who returned for Avengers: Endgame (maybe he was hanging out with Darcy and Goose). That was especially disappointing given that we still haven’t heard of active development for a third Ant-Man movie yet either. Whatever’s causing Marvel Studios to drag its feet on that might be to Warner Bros.’s advantage, because that studio has cast Michael Peña as one of the human leads in their upcoming Tom & Jerry movie (April 16, 2021). Chloë Grace Moretz will be the lead character, as a new employee at an elegant hotel where Peña’s character is the deputy general manager, and an alley cat named Tom is enlisted to take care of a pesky mouse named Jerry. Tom and Jerry will be mute, as they were in most of their classic cartoon short films.

In a rare example of “people complaining about a movie online” actually having an immediate impact, earlier this month, The Weekly Ketchup reported that Sonic the Hedgehog was getting a CGI redesign for his upcoming movie following negative reactions to the first trailer. People quickly speculated that such a rework would probably require more time, and that proved to be a correct guess as this week Paramount Pictures pushed the release back from November 8, 2019 to Valentine’s Day, 2020 (up against the third Kingsman movie). Jim Carrey is expected to look pretty much exactly the same as Doctor Robotnik.

Although Samuel L. Jackson did have small roles in both Coming to America and the comedy concert film Eddie Murphy: Raw, he’s never costarred with Eddie Murphy in the last 25 years or so, the era in which “Samuel L. Jackson” is a mega star. If this week’s news goes anywhere, that may change in the next few years, as both actors are now being named as the possible leads in the same film. That movie would be a remake of 1993’s Grumpy Old Men (63% Fresh), starring Jack Lemmon (then 68) and Walter Matthau (then 73). Eddie Murphy (currently 58) is already attached to star in this remake, and Samuel L. Jackson (currently 70) is reportedly “circling” the project. Unfortunately, the Grumpy Old Men remake currently looks like a “Rotten Idea” due to the multitude of “Rotten” Tomatometer scores for the remake’s director, Tim Story. But it could be time for a turnaround.

1. This Week in Remakes Pt. 2: Mel Gibson’s The Wild Bunch

There’s a common notion that the best candidates for remakes are films that were flawed in the first place. The idea is that revisiting movies that could genuinely be improved makes more sense than revisiting something that is generally considered to have been done right the first time. For example, 1939’s The Wizard of Oz is itself a remake (and not even the first one), following silent films that lacked the music that made it a classic. So, when a movie like 1969’s The Wild Bunch has a 94% Certified Fresh Tomatometer score and a spot on various “Best Movies of All Time” lists, you’d think no one would ever consider remaking it. Those people would not be Mel Gibson. Warner Bros. is preparing exactly such a remake to be directed by Gibson, and negotiations have begun with three major stars. The potential stars for The Wild Bunch remake include Michael Fassbender (Prometheus, X-Men: First Class), Jamie Foxx (Django Unchained), and fresh off HBO’s Game of Thrones, Peter Dinklage.