Today’s Ketchup brings you another 10 headlines from the world of film development news, covering movies with new roles for Kevin Hart, Angelina Jolie, and Lupita Nyong’o. 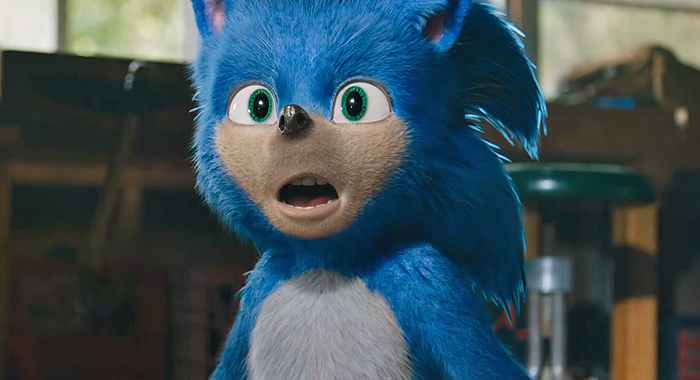 Let’s start this story off by saying Paramount Pictures should’ve seen this one coming. Back in December, the first silhouetted look at their movie version of Sonic the Hedgehog led to a flurry of mostly-not-very-positive social media reactions, mostly about Sonic’s legs. Keep in mind that Sonic the Hedgehog is a character that’s been depicted in dozens of video games, so there’s an established Sonic “look.” This week, the Sonic the Hedgehog trailer debuted, and the collective fan backlash against Sonic’s design was even louder this time. (The eyes are too small, the nose is at the wrong angle, and the teeth. Where to even begin on the teeth?) The Sonic the Hedgehog missteps are only accentuated by the timing of the trailer in the same week as the first Pokemon Detective Pikachu reviews, as that film has not one but dozens of video game characters that look pretty much exactly like they do in the games. The good news, however, is that Sonic the Hedgehog director Jeff Fowler relatively quickly responded on Twitter, “The message is loud and clear… you aren’t happy with the design & you want changes. It’s going to happen. Everyone at Paramount & Sega are fully committed to making this character the BEST he can be.” Sonic the Hedgehog is scheduled for release on November 8, 2019 (up against Last Christmas, the WWII drama Midway, and The Shining sequel Doctor Sleep).

1. ANGELINA JOLIE TAKES ON THOSE WHO WISH ME DEAD

If you’ve heard about one new movie project for Angelina Jolie lately, it was probably Marvel Studios’ The Eternals, but that movie doesn’t start filming until this September. That leaves a few months for Jolie to work on another project, and it’s going to be Those Who Wish Me Dead, the next film from director Taylor Sheridan (Wind River, writer of Sicario and Hell or High Water). Adapted from the novel by Michael Koryta, Those Who Wish Me Dead has a story that’s not easily described in just a few words, but we’ll just tease that it involves Angelina Jolie working on a forest fire lookout tower and a 14-year-old witness to a brutal murder who’s in the woods as part of a witness protection program. Jolie’s costars will include Tyler Perry, Jon Bernthal (The Walking Dead, Netflix’s The Punisher) and Nicholas Hoult (About a Boy, Warm Bodies).

Every year, it’s interesting to see what new projects the Academy Award winners will be doing next. Olivia Colman’s speech as the Best Actress winner for The Favourite was one of this year’s highlights, and now we know what’s on the horizon for her. Colman and Anthony Hopkins (who won his own Best Actor Academy Award for Silence of the Lambs) are teaming up for a British drama called The Father, based on a play. Hopkins will play “a mischievous and highly independent man who, as he ages, refuses all assistance from his daughter” (Colman). Olivia Colman will also soon be seen in Netflix’s The Crown as the next actress to play the series’ Queen Elizabeth II after Claire Foy.

3. GREEN BOOK DIRECTOR GOING ON THE GREATEST BEER RUN EVER

Speaking of follow-ups to this year’s Academy Award winners, let’s move on to Green Book, which won three of the year’s major Oscars: Best Original Screenplay, Best Supporting Actor, and the big prize, Best Picture. Director Peter Farrelly’s Tomatometer has more Rotten splotches than Fresh ones, but now he’s got a Best Picture to his credit. This week, Farrelly signed on to write and direct an adaptation of the non-fiction book The Greatest Beer Run Ever: A True Story of Friendship Stronger Than War. Like Green Book, this film will be set in the 1960s, as John “Chickie” Donohue sets off to Vietnam to reunite over some beers with friends who are otherwise pre-occupied with fighting the Vietnam War (yes, really). In related news, one of the Green Book producers confirmed this week that the film’s target audience was “older white people.”

Lupita Nyong’o most recently starred in Jordan Peele’s Us ( Certified Fresh at 94%), which is still in release and continuing its way up the global box office top 10 for 2019 (it’s currently at #8). Nyong’o recently wrapped filming of a zombie comedy called Little Monsters (costarring Josh Gad), which will premiere on Hulu, and this week, she signed on for another film from the same writer/director. The science fiction comedy is currently untitled, but it was previously called Miss Universe, and has a log line that compares it to “Men in Black meets Miss Congeniality.” So, from those two hints, we can probably guess that it somehow involves a beauty pageant of various aliens, including at least one human (unless Lupita’s playing one of the aliens). Or maybe we’re reading those hints all wrong, and it’s about a secret police force that protects us from beauty pageants.

When Disney fired director James Gunn from Guardians of the Galaxy Vol. 3 last year (before changing their mind and hiring him back), they left his options open just long enough for Warner Bros. to swoop in and hire him for the soft reboot of The Suicide Squad (8/6/2021). Just based on what we know so far, it’s easy to spot the differences between the Rotten 2016 version and what Gunn’s planning. We don’t know yet who’s going to play King Shark (unless he’s just a big CGI monster), but this week, two of the other new villains-turned-heroes were cast, and neither are big stars. David Dastmalchian is not yet a household name, but you might recognize him from roles in The Dark Knight, Prisoners, and the Ant-Man movies, and now he’s joining The Suicide Squad as the Polka-Dot Man, a supervillain with a costume with super-powered polka dots (yes, really). For Ratcatcher (another fairly obscure villain), Gunn is going with a relative newcomer, Portugal’s Daniela Melchior. As for Guardians of the Galaxy Vol. 3, Gunn is expected to direct it after The Suicide Squad (8/6/2021), which suggests the earliest we might see it would be sometime in 2022.

4. KEVIN HART TAKING ON THE EXTREME JOB OF REMAKING A KOREAN COMEDY

Earlier in his film career, Kevin Hart’s Tomatometer was mostly dominated by Rotten splats, and to his credit, he’s been starting to turn things around lately with films like Jumanji: Welcome to the Jungle (Certified Fresh at 76%) and Captain Underpants: The First Epic Movie (Certified Fresh at 88%). We’re not going to give Kevin Hart the benefit of the doubt just yet (*cough* The Upside *cough*), but we’re willing to call this week’s news only borderline “Rotten.” Hart is producing — and will probably star in — an English-language remake of the hit South Korean comedy Extreme Job. If he does sign on to star, Hart would be playing a narcotics detective who goes undercover at a fried chicken restaurant to stake out a suspected crime gang, but the stakeout takes a turn when the operation results in unexpected business success. The original version has become South Korea’s top-grossing film of all time since its release just a few months ago.

Warner Bros. might be forgiven for thinking that they had a “sure thing” with their Fantastic Beasts franchise. Before last year’s Fantastic Beasts: The Crimes of Grindlewald, the Harry Potter franchise’s films had always been Certified Fresh and blockbuster box office hits, collectively earning upwards of $8 billion worldwide. That’s not to say The Crimes of Grindlewald was exactly a bomb, considering it earned $653 million worldwide, but those results were probably disappointing. Warner Bros. had been planning on releasing each new film every two years in odd years (2016, 2018, 2020, etc), but this week, the studio pushed Fantastic Beasts 3 back a year to November 12, 2021 instead. Warner Bros. executive Toby Emmerich explained the move by saying that they want to “give the filmmakers time and space to allow their artistry to truly flourish and deliver the best possible film to our fans.” It’s not yet known if Johnny Depp will be returning for the third film.

If the early reviews are any indication, next week’s Pokemon Detective Pikachu may finally break the long-standing streak of Rotten Tomatometers for movies based on video games. That would be great and all, but that still leaves dozens of Rotten ones to account for. One director hoping to contribute to an upward trend is F. Gary Gray (Straight Outta Compton, The Fate of the Furious), who previously had been trying to get a Kane and Lynch movie going. Gray is now attached to direct a film based on the video game franchise Saints Row, which, over the course of several games, began with the Grand Theft Auto template and took it to increasingly ridiculous settings and themes. How far Gray is willing to go is anybody’s guess.

To her credit, Jennifer Garner continues to find regular work even as the film industry arguably moves further away from the sorts of movies that she’s previously been known for. Unfortunately, for her next film, Garner is signing up to work with two screenwriters whose work has never earned a Fresh score; they haven’t even scored above 46% since the 1990s. Jennifer Garner is signed to star in Fantasy Camp, a comedy set up at mini-major STXfilms, the company behind the same creative team’s most recent film, I Feel Pretty (Rotten at 35%). Garner will play a woman who goes “to a reunion at the theater camp of her youth, Camp Footlights, where she will get the chance to challenge her fears, live out her dreams and finally take the stage.”