Captain Marvel First Reviews: A Solid Entry in the MCU

See what critics are saying about the introduction of Brie Larson's Carol Danvers to the Marvel Cinematic Universe.

The Marvel Cinematic Universe hasn’t had a Rotten movie yet, and the franchise isn’t about to go south with its 21st installment. Captain Marvel is another success for the studio, though according to the first reviews of the movie, it may not quite qualify as top-tier Marvel. Many critics say the story and action are somewhat disappointing, but we’re introduced to many great new characters in a good-enough entry into the superhero genre canon.

Here’s what the critics are saying about Captain Marvel:

Does it meet expectations?

Captain Marvel is the female-driven Marvel film that we’ve been waiting for.
– Danielle Solzman, Solzy at the Movies

There are a lot of expectations riding on Marvel’s first female-led (and first female co-directed) feature, and I am happy to report that the film does indeed live up to the hype.
– Kate Gardner, The Mary Sue

Captain Marvel is a must-see for superhero fans, especially those who have craved more female-led stories.
– Molly Freeman, ScreenRant

All-in-all it’s fine, but nothing to get too excited about. And it could have and should have been so much better.
– Lindsey Bahr, Associated Press

How does it compare to others in the MCU?

I do wish there was more of a “wow” factor throughout. There just wasn’t enough at stake.
– Catalina Combs, Black Girl Nerds

The picture is not dull, exactly, just mundane, marked by unimaginative plotting, cut-rate villains, a bland visual style and a lack of elan in every department.
– Todd McCarthy, Hollywood Reporter

As generic and retrograde as Black Panther was specific and revolutionary, Captain Marvel is a frustrating disappointment.
– David Ehrlich, IndieWire

Captain Marvel is one of the studio’s better offerings…[but] It feels less visionary and divergent next to Black Panther.
– Hannah Woodhead, Little White Lies

Luckily, Captain Marvel doesn’t have to be better than all of the MCU’s previous films to be something enjoyable.
– Kayti Burt, Den of Geek

What will women think of it?

This film gives us the very definition of girl power with a female-led superhero story that encourages and celebrates women empowerment, independence, and confidence.
– Catalina Combs, Black Girl Nerds

There are plenty of moments where the target market (and beyond) will see themselves reflected. Wholly satisfactory one-liners she drops in the climax provide inspiration – specifically for female filmgoers’ liberation from guilt and doubt.
– Courtney Howard, Fresh Fiction

Captain Marvel doesn’t quite become the powerful feminist movie it purports to be, but it is empowering.
– Hoai-Tran Bui, Slashfilm

How is Brie Larson in the lead?

Larson is a damn near perfect Carol. She’s funny, tough, and deeply compassionate. Larson conveys so much through a twitch of the lips or a change in expression.
– Kate Gardner, The Mary Sue

Larson manages to capture a fiery but playful sense of humor in her character that deftly avoids the tropes associated with naive, superpowered outsiders making “first contact” with humans.
– Meg Downey, IGN

Larson’s performance is key to the success of Captain Marvel and the actress shoulders that burden exceptionally, nailing the cocky and snarky — but ultimately good-hearted — hero.
– Molly Freeman, ScreenRant

Larson effortlessly displays the full range of emotions of a woman grappling with her own identity and self-worth…there’s an ease to Larson’s performance and easy chemistry with every character she comes in contact with.
– Hoai-Tran Bui, Slashfilm

The performance is fine, if not exciting or inspiring.
– Todd McCarthy, Hollywood Reporter

And the character herself?

I spent over two hours with Captain Marvel/Carol Danvers and I still have no idea what her personality is.
– Lindsey Bahr, Associated Press

Captain Marvel is far and away the least compelling thing about Captain Marvel…Not since Edward Norton’s Hulk has the MCU offered such a two-dimensional title hero.
– David Ehrlich, IndieWire

What about the supporting characters?

The buddy cop dynamic of Fury and Carol is easily the strongest relationship.
– Kayti Burt, Den of Geek

The relationship between Carol and Maria Rambeau… is the team up we want more of. It’s the type of female relationship we don’t get to see regularly on screen.
– Catalina Combs, Black Girl Nerds

The best female friendship the MCU has ever seen…it is the strength of Maria and Carol’s relationship that elevates the film to another level.
– Yolanda Machado, io9

The film’s busy third act would be a mess if not for its deep bench of supporting characters, who connect to each other in a number of warm and wonderful ways.
– David Ehrlich, IndieWire

How is Ben Mendelsohn’s Villain?

He’s a far cry from a traditional MCU villain, but what he lacks in deviousness he makes up for in a genuinely charming sense of humor.
– Meg Downey, IGN

All too often, great actors kind of get lost in these type of alien/villain roles, but Mendelsohn brings a humanity (Skrullanity?) to this role I was not at all expecting.
– Mike Ryan, Uproxx

The film’s MVP is without a doubt Ben Mendelsohn…He’s given much more to do here than in his last high-profile Hollywood gig and appears to be having an absolute blast doing it.
– Hannah Woodhead, Little White Lies

What’s this we’re hearing about a scene-stealing cat?

Goose is the real MVP and I need him in every MCU film from now on.
– Yolanda Machado, io9

Get that cat a spinoff.
– Kate Gardner, The Mary Sue

What’s with all the Star Wars comparisons?

This is a full-on, strange, sci-fi film. Some of the scenes reminded me of Rey snapping into the endless mirrors during The Last Jedi.
– Mike Ryan, Uproxx

Taking a look at the Kree capital for the first time on screen is similar to the first time we saw Coruscant in Star Wars: Episode 1- The Phantom Menace.
– Danielle Solzman, Solzy at the Movies

Experiencing the film’s final moments is not unlike the experience of watching the final moments of Rogue One, so cleverly does the film weave its way into existing canon.
– Kayti Burt, Den of Geek

How are the action scenes?

The action in Captain Marvel is on autopilot — all rapid cuts and no rhythm, and very clearly shot by a second unit who were well-versed in the technical aspects of such a scene.
– Hoai-Tran Bui, Slashfilm

With the added troubles typical to Marvel Studios movies in terms of their CGI, Captain Marvel’s action is lacking at times.
– Molly Freeman, ScreenRant

Does Captain Marvel make us hopeful for the future of the MCU?

If Captain Marvel is indicative of the future of the Marvel Cinematic Universe, then the franchise is more vital and impressive than it has ever been.
– Brandon Zachary, CBR

Larson and Carol are both welcome additions to the massive shared universe with what we can only hope are bright futures ahead of them.
– Meg Downey, IGN

If our new core characters for the franchise will be T’Challa, Peter, and Carol, then the universe is in good hands.
– Kate Gardner, The Mary Sue

If Captain Marvel is any indication, these movies are about to get a little more weird.
– Mike Ryan, Uproxx

I came out of the film not caring all that much about her beyond what her dazzling powers might mean for the next Avengers film, which is perhaps the lamest way of all to experience these movies.
– Lindsey Bahr, Associated Press 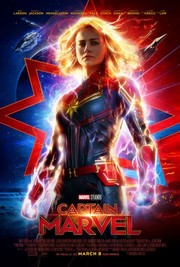