Also: Next Day Air tries to conquer the non-blockbuster market.

For the first time in four years the second weekend of May will see a new release debut in the number one spot as Paramount boldly re-energizes one of its oldest franchises with the new Star Trek which aims to topple last weekend’s champ X-Men Origins: Wolverine. The frame’s only other new title, the comedy Next Day Air, gets a much more subdued launch and will find itself much lower on the charts. The battling action tentpoles should lead the North American box office to a solid win over last year’s comparable session helping the summer continue its red hot start.

Left for dead after 2002’s dreadful and forgettable installment Nemesis, the Star Trek movie franchise gets a new lease on life thanks to director J.J. Abrams and his mission to boldly go where no man has gone before – to the origin years taking place before the landmark 1960s television series. The new Trek boasts a new cast including Chris Pine and Zachary Quinto heading up the crew of the U.S.S. Enterprise playing James Kirk and Mr. Spock, respectively. Eric Bana, Bruce Greenwood, Zoe Saldana, Simon Pegg, and John Cho also join the adventure.

While never a mega-smash at the box office, the Trek franchise has been a consistent winner with audiences until the final two films. It’s hard to find a series of movies spanning four decades in which the 1986 installment still remains the highest-grossing one. For Star Trek, the only film to reach nine digits was the whale of a tale Star Trek IV: The Voyage Home which grossed $109.7M more than 22 years ago when tickets were significantly cheaper. The top opening for the franchise was the $30.7M of 1996’s Star Trek: First Contact which featured the cast of The Next Generation. Abrams will soon beat both milestones, although today’s higher ticket prices will contribute as well.

Still a valuable property, Trek was rebooted by Paramount in a bold move with a new cast and new director. Along with its younger set of actors comes a marketing push aimed to bring in younger audiences – the ones that drive the summer box office. These are important people who are aware of Kirk and company, but may respond better to a modern tricked out version that actually makes the sci-fi property cool. Trailers and commercials for the new Abrams vehicle are among the best for any film in 2009 and the studio gets kudos for slowly and steadily building up anticipation over the past year with its brilliant campaign. Ads promise that ‘this is not your father’s Star Trek‘ and the under-25 set will respond in large numbers. Promotional partners and marketing tie-ups will also help in broadening the audience.

The key has been to present the film as an action-packed adrenaline-pumping summer thrill ride first making it an event film open to all, without alienating the faithful. It’s essentially become Trek for the Fast & Furious generation. Comparisons to grosses for any of the ten previous films in the series would be foolish. Take those numbers, crumple them up, and throw them in the trash as they have absolutely nothing to do with this new film and today’s moviegoing era. Trek may not open as big as Wolverine, but it has a much better shot at hitting the $200M domestic mark in the long run.

An early blast-off with shows starting at 7pm on Thursday night will lead to hardcore fans promoting the film on Friday at work and school to the all important undecided voters. The limited two-week Imax run in 138 locations will help boost the numbers too, although the presence of Wolverine will siphon off some of the action/sci-fi crowd.

As with Iron Man last year, Paramount is in the enviable position of having in Trek an early summer tentpole that comes with a built-in audience that will guarantee a stellar opening, but which is also a rock solid action entertainer that can attract new fans and repeat business in the weeks ahead thanks to what should be very positive word-of-mouth. Critics have been universally praising Star Trek which will be crucial in winning over older fans and influencing newbies. Ratings at RottenTomatoes.com have been nearly identical – 94% for Star Trek and 93% for Iron Man. Comic and sci-fi fans that felt burned with Hugh Jackman’s new origin tale may feel redeemed after they take a ride with Jim Kirk and pals.

A massive global release is planned this weekend and cast and crew have been flying across this Class M planet endlessly promoting away. It’s a smart investment as the studio needs to not only make this $125M film work, but is in a position to keep dollars rolling in across the next decade if it can succeed in making Star Trek relevant again to moviegoers. The franchise indeed will be reborn. Bursting into 3,849 theaters, Star Trek might open to about $71M over the Friday-to-Sunday period and $74M including Thursday night sales.

Though his name may sound like a Trek villain’s, director Benny Boom offers up the weekend’s only competing wide release with the comedy Next Day Air. Unfortunately tagged with an R rating, the Summit release stars Mike Epps, Donald Faison, and Mos Def and tells the story of two bumbling criminals that try to sell a package of cocaine mistakenly delivered to them. Young men and urban audiences are the target here and the rating will cut into some potential with younger teens who might be up for this film. Starpower is lacking as Epps cannot open a film without Ice Cube at his side. The marketing push has not been too strong and a moderate release in about 1,000 locations will limit the potential. DVD is where the bulk of the crowd will catch this one. Look for Next Day Air to bow to about $3M.

Donald Faison and Mos Def in Next Day Air

X-Men Origins: Wolverine enjoyed a brawny opening last weekend with a sizable $85.1M debut. The Fox tentpole has collected solid numbers midweek with $5.5M on Monday and $4.6M on Tuesday, however the audience is already eroding quickly. With last year’s Iron Man being the notable exception, summer kickoff films typically fall hard on the second weekend like Spider-Man 3‘s 62% in 2007, Hugh Jackman starrer Van Helsing‘s 60% in 2004, and X2: X-Men United‘s 53% in 2003. Add in the expected muscular bow of Star Trek that will play to the same audience and Wolverine‘s decline should be more Spidey and less X-Men. This year, high profile action flicks Fast & Furious and Watchmen both debuted big but fell by 62% and 68% respectively in the second round. A tumble of at least 60% for Origins would lead to a weekend take of about $33M lifting the ten-day tally to $136M.

With no new date movies, the Matthew McConaughey–Jennifer Garner comedy Ghosts of Girlfriends Past might have decent staying power despite the bad reviews. Paramount has been actively courting young women for its Trek reboot but many will still want to spend time with characters without pointy ears. A 45% drop for the Warner Bros. release would deliver a $9M gross with the total reaching $28M in ten days. The relationship thriller Obsessed may slide by 50% to around $6M or a 17-day tally of $56M for Sony.

LAST YEAR: Easily defending its spot atop the box office chart, Iron Man enjoyed a great hold dropping 48% to $51.2M. Super hero films and action tentpoles often tumble by more than 60% in the sophomore frame so Paramount saw evidence of the leggy run that would follow as the Robert Downey Jr. starrer spent an incredible 14 weeks in the Top 20. In a shocker, the modestly-budgeted romantic comedy What Happens in Vegas bowed in second place with $20.2M beating out the expensive and heavily-hyped franchise flick Speed Racer which finished in third with only $18.6M. Final grosses reached a sturdy $80.3M for Fox’s Cameron Diaz–Ashton Kutcher laugher and a disturbing $43.9M for the Warner Bros. automotive disaster. Rounding out the top five were the female-skewing comedies Made of Honor with $8.1M and Baby Mama with $6.2M. 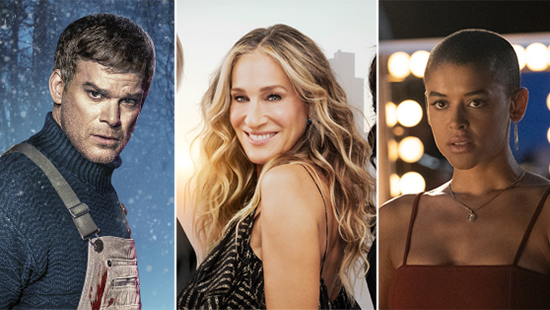