Ahead of the "Elseworlds" crossover, find out what's coming next from Arrowverse stars Stephen Amell, Melissa Benoist, Caity Lotz, and more.

Your favorite Arrowverse superheroes from Arrow, The Flash, Supergirl, and DC’s Legends of Tomorrow are teaming up for the CW’s annual crossover event on December 9, 10, and 11. The 2018 installment, titled “Elseworlds,” will consist of three parts and will also serve as the winter finale for Arrow, The Flash, and Supergirl. (While at least one of the Legends will join their superhero brethren in the third hour of “Elseworlds,” the crossover event will not include an episode of the series.)

Rotten Tomatoes recently visited the sets of those series, where we asked the casts to share anything and everything they could about the storylines that are heating up as the crossover approaches. While we’ll have to save some of it to discuss another day (stay tuned for intel on The Flash’s 100th episode, along with details on the crossover itself), here are a few things we can say about winter in the Arrowverse.

Legends of Tomorrow Will Have Its Own Winter Finale

While word broke last week that at least one Legend will appear in “Elseworlds,” the story of Legends of Tomorrow goes in its own wild direction in the coming weeks, leading to a two-part finale. While star Maisie Richardson-Sellers could not reveal too many details about the episodes, she did say her new character, Charlie, will factor heavily into the story as she and John Constantine (Matt Ryan) are “forced to work together.” While the two characters have not gotten along since Charlie’s arrival, Richardson-Sellers added that the pair will eventually bond as they are both “social misfits, Brits, and like a drink.”

If that’s not quite enough to get you excited about the storyline, you should probably know that it will also feature puppets and a singalong.

But before that, Nate’s (Nick Zano) father Hank (Tom Wilson) will visit the Waverider and discover what the Legends are doing with the money he poured into the Time Bureau. As Jes Macallan, who plays Time Bureau director Ava Sharpe, put it, the situation “gets very muddy for Ava and the Legends” as her tendency to focus on mission objectives blinds her to a potentially bigger problem.

“She’s just kind of tunnel vision on these magical creatures; containing them as you will,” Macallan told us. That tunnel vision, and her eagerness to please Hank, may mean she will be the last person to learn about Project Hades — the shadowy plan first teased at the Heywood Thanksgiving dinner. 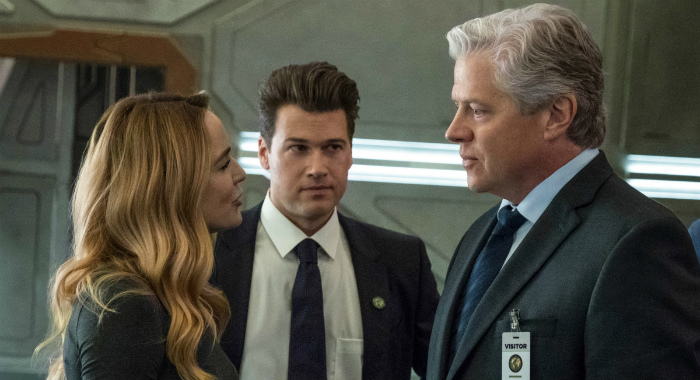 Lotz also suggested that Sara’s tendency to break the chain of command may see her stick up for Ava during Hank’s visit.

And as for that mysterious person Nora (Courtney Ford) saw when she touched John last week?

“It’s part of John’s past,” Ryan teased. “The great thing is he’s got so many demons in the closet, so many previous relationships that have gone wrong that we can call upon.” The actor added that John is “definitely carrying some baggage and he’s brought some heavy baggage to the Waverider to work out.”

While things built to a head with Ricardo Diaz (Kirk Acevedo) on Arrow, it is unclear if the team will properly re-form in any way before the crossover.

As Rick Gonzalez explained, “I think what we’re trying to do is establish this idea that with [Oliver] being in prison, everyone has found their own footing.”

Not that Gonzalez’s character Wild Dog has really found the right place yet: “He truly cares about people, and I think he wants to feel engaged in terms of wanting to help people.”

He began the season as something of a community organizer, but the pull toward vigilantism sees the character go out night after night — even without his mask. It is a predicament most of the team faces, as they ask themselves how they can be of value.

One character who has found a place she can be valued is Dinah Drake (Juliana Harkavy), who gave up being Black Canary to become a Star City Police captain. But as viewers have already seen, the flash-forward future finds her back in the Canary gear — but possibly without her powers.

“She does have the scar [on her neck] and we do allude to it a couple of times. We don’t necessarily know where it’s come from yet,” Harkavy said of the character’s future. “It’s something that they’ve left open, which I like.”

Back in the present, Dinah’s evolving bond with the Earth-2 Laurel Lance (Katie Cassidy) has proved to be one of the more surprising turns on the show. But Harkavy felt the character, who still has ill feelings toward Laurel for killing Vigilante last season, is coming to this from a different place. 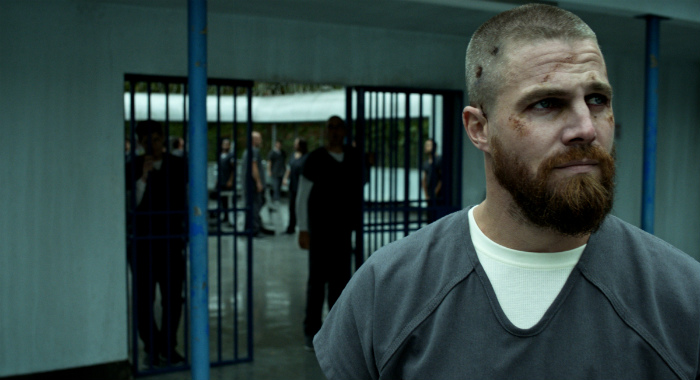 “I think Dinah is always open for growth and I think she needs camaraderie and she needs friends,” she said, adding, “At this point, after the team has been fractured, you kind of gotta work with what you have. I think there’s something good there in Laurel. She’s working on it.”

Meanwhile, as the person tasked with arresting the new Green Arrow, Harkavy admitted Dinah still has “the heart of a vigilante” and may eventually welcome the imposter archer into her confidence — provided the new Green Arrow is truly worthy of that trust, of course.

As for the true Green Arrow, Oliver Queen (Stephen Amell), the doors to Slabside swung open thanks to the team’s recent efforts to track down Diaz. But transitioning back to life on the outside will not be easy for Ollie.

“Nothing’s ever going to be perfect or normal,” Amell said of that post-prison life. It will also likely alter his relationship with Felicity (Emily Bett Rickards). Nonetheless, Amell thinks it can lead to positive change for the couple as long as they embrace the fact that their old life no longer exists. Said the actor, “The sooner the two of them accept that, the sooner that they can move on.”

He also teased the possibility that the torture Oliver faced in Slabside’s Level 2 may prove to be a “net lesson” with Oliver seeing the world “a little less black and white.”

On Supergirl, Nia’s Powers Are About To Activate

As hinted at in the most recent episode, Nia Nal’s (Nicole Maines) narcolepsy is about to emerge as a very special super power. Considering Nia is from the planet Naltor, it will be no surprise to readers of Legion of Superheroes that her narcoleptic tendencies give her a form of precognition.

“It’s a superpower that we haven’t really explored on this show yet,” said star Melissa Benoist, who plays Kara/Supergirl. “So, I think the writers especially are having a lot of fun coming up with what her abilities entail and the rules of that.”

Added Maines, “You kind of see her get caught up in her lie and have to explain what’s going on. [Kara] helps her through that and helps her try to come to terms with her powers.”

But Nia acknowledging her abilities is only the beginning of a journey she will take — along with Kara and Brainiac 5 (Jesse Rath) — to becoming a hero herself. Benoist dubbed the trio “the Superfriends.”

“It becomes an issue of who knows whose identity at that point. So that’s a funny thing that we play with as well during the scenes,” said Rath. The ongoing quasi-romantic tension between Nia and Brainy will also continue to escalate over the course of the next few episodes as “the situation is more intimate, but it’s still just as awkward as ever.” According to Rath, the pair is “painfully sweet” and funny.

After the winter break, Nia’s family — mother Isabel (Kate Burton) and older sister Maeve (Hannah James) — will visit Nia in National City. Though Maines could not reveal too many details about the family dynamic, she mentioned the relationship is “supportive.”

Meanwhile, James Olsen (Mehcad Brooks) will find his decision to engage with the Children of Liberty has less support than he expected from friends and colleagues. It has already caused ripples in his relationship with Lena Luthor (Katie McGrath), and will lead to other emotional conflicts. According to Maines, Nia will be “more mad at herself” than at James as she asks herself, “how can I stop bad things happening to people I care about?” 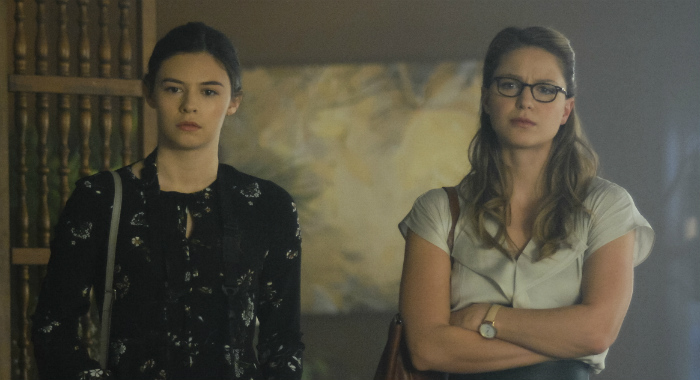 Kara has a more philosophical take on the matter.

“She is aware that his intentions are always the best,” Benoist said, “and I think she knows James well enough to know that he’s a risk-taker and that he’s gonna do what he needs to do to tell the story he wants to tell as a journalist.”

Later in the season, the Russian version of Kara — nicknamed Red Daughter — will make her presence known. For Benoist, the storyline gives her another opportunity to explore a different version of Kara following the Nazi Kara of 2017’s crossover, “Crisis on Earth-X.” As she explained it, “someone with the powers that Kara Zor-El has, you have to really think about the way they were nurtured and where they came from and their circumstances of becoming a superhero.” The story will delve into that nurturing and how it produced a decidedly different Kara.

Of course, Benoist was very tight-lipped about the recent announcement that Jon Cryer will play Lex Luthor on the series. Her only comment on the matter: “It’s really cool.”

The three-part “Elseworlds” crossover/winter finale event airs Sunday, Dec. 9 with The Flash, continues Monday, Dec. 10 with Arrow, and concludes Tuesday, Dec. 11 with Supergirl, all at 8 p.m. on The CW. Legends of Tomorrow‘s two-part winter finale will air in December, and the series will return to the schedule in April 2019.