A Runaways Final Season Full Of Magic, Aliens, and A Key Crossover

Elizabeth Hurley's Morgan le Fay shows up to wreak havoc, and Cloak and Dagger might just save the day.

Despite the fact Marvel’s Runaways will be completing its run on December 13th, it still has plenty of story to tell. In fact, this may be its biggest season, as it finally brings straight-up magic into its tale of teen runaway superheroes, aliens, supervillain parents, intergalactic intrigue, and a lovable pet dinosaur.

In fact, the show’s unique mixture of elements was part of the appeal for Elizabeth Hurley, who spoke with Rotten Tomatoes and other journalists during a set visit last August and joins the program as Morgan le Fay.

“What I really loved about it is the fact that the grown-ups had great stuff to do and were integral to the plot and had moments of their own. They weren’t just feeding the kids [conflict].” That said, Morgan will certainly be feeding conflict to Nico (Lyrica Okano) as “one of the most powerful sorceresses in history and the universe” and the legendary magician of Arthurian legend. And as Hurley put it, “she’s definitely bringing a completely different element to the show from a magic point of view.”

Though she did not appear in Runaways’ second season, she is at the heart of Nico’s troubles toward its conclusion. “Nico is a fledgling baby witch, unsure of her powers, and can’t really control herself yet,” Hurley said of the character Morgan is most interested in positioning toward her ends.

“We’re going to learn more about what that darkness is about, where it comes from, [and] what it’s connected to,” added executive producer and showrunner Stephanie Savage.

“Nico seems at first [to be Morgan’s] chief adversary, but you’ll start to see some connection between her and Tina [Nico’s mother, played by Brittany Ishibashi],” said Savage’s showrunning partner Josh Schwartz. “So mother and daughter might actually find themselves aligned against the larger evil in ways that will surprise people.” 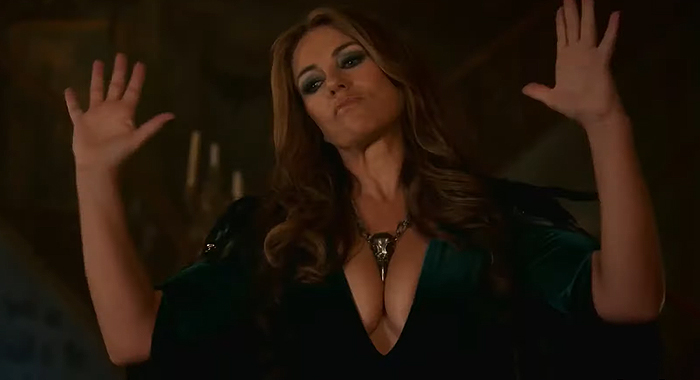 First introduced in 1955’s Black Knight #1 by Stan Lee and Joe Maneely, Morgan was presented as an immortal half-faerie with designs on world conquest well after the fall of Camelot. Projecting her consciousness into the modern day, she caused plenty of trouble for Spider-Man, the Avengers and others. Schwartz and Savage credited co-executive producer Quinton Peeples with pulling the character into the Runways’ orbit. “Based on where we wanted to go and what we wanted to do in terms of Marvel magic, she was a really strong fit for us,” Peeples said.

But for the purposes of the show, Morgan will not be reaching out to Nico from the 6th Century. Instead, viewers will find her in a place more familiar to Marvel film watchers: the Dark Dimension featured in Doctor Strange. The strange realm also appeared in Marvel’s Agent Carter and Marvel Clock & Dagger, but Peeples said, “Ours is very specific to our show, and I think it expands the vocabulary of what that world is like and how it operates.” These rules will be important as Morgan tries to escape its pull.

And once she makes her way to 2019 Los Angeles? “She thinks there’s room for improvement,” Hurley said.

Of course, Morgan’s attempts to join the modern world may not be the Runaways’ biggest problem when the season begins. When we last saw them, the group was divided, with Karolina (Virginia Gardner) and Chase (Greg Sulkin) captured by Jonah (now played by James Marsters) and the other remaining aliens from his spaceship, who put them in stasis tubes and seemed prepared to serve them up for supper in the finale’s closing moments. 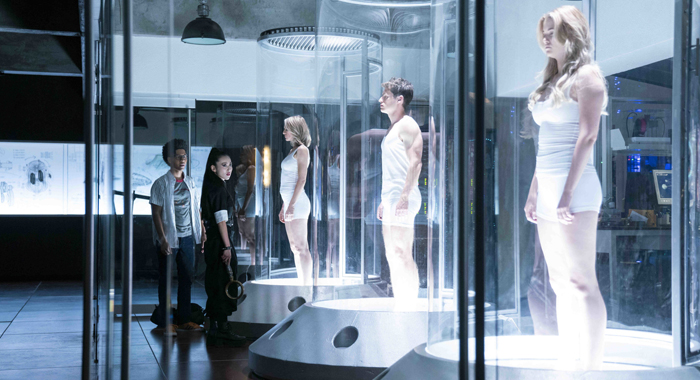 “We pick up right where we left off last season, and the gang is trying to figure out how to get us out of those tubes,” Gardner told us. “And it takes them a little bit of time. We spend a long time in those tubes.”

But Karolina’s time in the tube may give her space to process the Church of Gibborim’s new devotion to her. “She’s still very uncomfortable with it,” she said. “Everywhere she goes, people are bowing down to her, and there’s posters of her everywhere.” And while that may continue to be an issue for her, Gardner said Karolina’s big conflict will be figuring out her place with Nico. “We’re starting to see Nico get pulled towards this dark side the staff is leading her [toward],” she explained. “Karolina is trying to figure out if Nico is too far gone already or if she can pull her back from this dark side.”

To the actor, this ultimately means Morgan is the biggest threat the group will ever face, “beyond the parents, beyond PRIDE, beyond Jonah, beyond any of those things. Morgan le Fay is like a whole new animal for us.”

An animal that Rhenzy Feliz told us his character, Alex, considers a “f–king maze.” As the one member of the group lacking any powers or abilities, Alex must be “smarter than everybody else in order to contribute.” He teased those contributions may be surprisingly “practical” despite the magic on display. Nonetheless, he warned “one of the big things about this season is that no one’s really safe.” 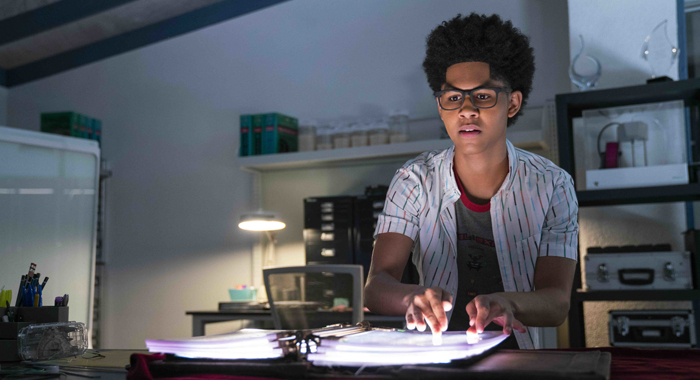 That lack of safety is a constant threat in the life of Nico’s father Robert (James Yaegashi), who, as the one of the more reluctant PRIDE parents, always seems to get it the worst, and left last season needing extreme medical care. “It does feel like Robert has nine lives,” Yaegeshi said. “I don’t know if that target’s ever coming off his back. I think part of the problem is that Robert’s comfortable having other people do things [for him], but things are so extreme in this world that when he tries to step out to be the alpha is when he gets in trouble.” His season will begin in the ICU and set off something of an interior journey for the character.

A mortally wounded Robert would usually be reason enough for Tina to put aside her own issues and help him, but now that she is possessed by one of the aliens, Ishibashi said the character has little concern for her host’s husband. “They didn’t end up using it in the final cut, but there was one take that we did where Tina had put a hastily written sign on him that said ‘Human in Danger’ and pasted it to his shirt,” she said. Instead, much of the actor’s time was spent building a new dynamic with Marsters and Brigid Brannagh, who now play formless aliens possessing the actor’s former characters. “To establish a new family dynamic is hilarious because all of a sudden, Victor [Marsters] and Stacey [Brannagh] are my mom and dad,” she said. “Jonah, this person who she hates more than anything in the world, who killed her daughter and destroyed her family, is now her father figure.”

Curiously, Ishibashi quipped that Nico will like the alien version of her mother better. “She’s like, ‘I already thought my mom was crazy,’” the actor joked. She also teased the debut of the aliens’ “Brother” – a character as yet unseen, but inhabiting one of the children. 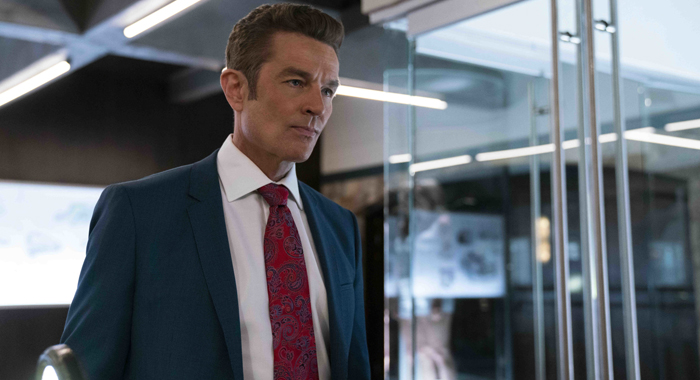 For Marsters, taking over the part of Jonah from Julian McMahon (his version of Jonah was obliterated last season) meant getting a chance to smile on the show for once. His previous character, Victor Stein, was the sort who never had any fun. “There’s something really delicious about playing that kind of character,” Marsters said. “But playing a character who does smile and is very confident, is having a good day and he’s enjoying being himself and is not morally conflicted about everything… It was a lot lighter of an experience.”

Another light experience, at least working on set, was the arrival of former Cloak & Dagger stars Aubrey Joseph and Olivia Holt for a special crossover episode. At the time, it was unclear if both series would continue past their current seasons, but the excitement about bringing the two shows together was electric.

“Olivia and Aubrey [are] super cool people, and so having them on set is awesome. Getting to know them a lot better is awesome,” Feliz said. “Apart from that, the story that we’re getting to tell with them, seeing their powers in action and seeing the groups mesh. We’re teenagers at the end of the day, so it’s like the little snippets and jokes and kind of witty humor going back and forth.”

Schwartz said they always wanted to do some sort of crossover as both shows shot their pilots around the same time. “The idea that there are these young heroes walking around in L.A and Louisiana who don’t know each other… It just felt too good to miss out on.”

“Cloak and Dagger are here to save the day,” he added. “But they’re also here to help save some relationships as well.” 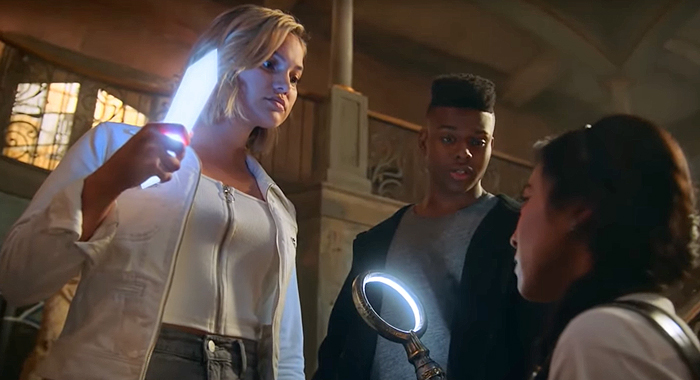 Everyone we talked to teased Cloak and Dagger will arrive at one of the most high-stakes moments ever for the series. “The mission that they’re on is extremely serious,” said Savage. “And they kind of brought that gravitas.”

But it seems Tyrone (Joseph) and Tandy’s (Holt) arrival in Los Angeles will feature lighter moments as well. “[It’s] has been a lot of fun for me because I don’t have to come to work every day and scream and cry,” Joseph joked. “Our show is obviously very dark in comparison to their show. It’s a lot more lighthearted.” That means the Cloak and Dagger seen on the show will be in much better spirits than when we last saw them at the end of the program’s now-series finale. In fact, discovering other super-powered teens will alleviate some of their tensions. “I think the main thing is just the fact that they’re teenagers that are like us,” Joseph explained. “It’s kind of like, ‘let’s see what’s up with these guys.’” He also teased their decision to become proper heroes may have an effect on the Runaways, who may finally be able to see past their own family struggles to a larger world. “I think they’re definitely noticing we have these powers for a reason and we’re a team for a reason,” he said.

So, despite the program coming to its conclusion, it seems to be the culmination of many Marvel TV ideas, with aliens, magic, and superheroes coming together both in conflict and in friendship. In short, it’s a page straight out of the Runaways comic and a fitting end for this part of Marvel’s ongoing tale.

The third and final season of Marvel’s Runaways premieres on Friday, December 13 on Hulu.