Randall Park, Melissa Fumero, and Their Blockbuster Costars Share 9 Things To Know About the Comedy Series

Everything comes full circle. When Netflix began, it irrevocably changed the video store business. No longer would people leave the house to rent movies because Netflix would mail them directly to their house. Now, Netflix is streaming the nostalgic new show Blockbuster.

1. BLOCKBUSTER HAS ITS OWN ROSS AND RACHEL 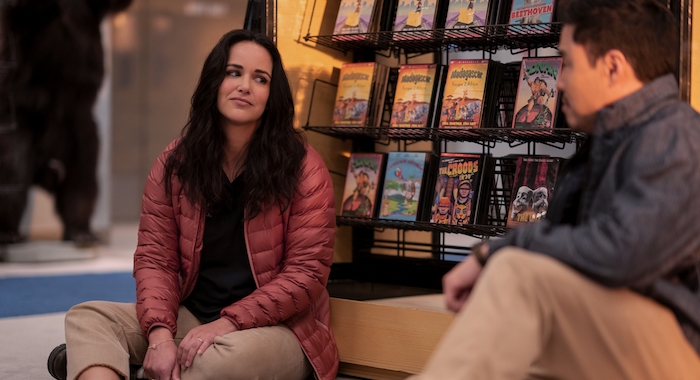 Park plays Teddy, the manager of Blockbuster Video. Fumero plays Eliza, his childhood friend who goes back to work at the store when she divorces her husband. Teddy has feelings for Eliza but when she tries to work things out with her husband, he’s not sure he can stand in her way.

“Ross/Rachel, Jim/Pam, really any version of that,” Park said of Teddy and Eliza’s relationship in the show.

2. THIS ISN’T THE TRUE STORY OF THE LAST BLOCKBUSTER

Blockbuster is a fictional show. If you want to know about the real last remaining Blockbuster video store, Google the one in Bend, Oregon.

“It’s not Bend,” Ramos said. “We’re playing it as Michigan. I think a little bit of the idea was to sort of use the Blockbuster as this iconic location, but build our own separate [story]. It’s less about the Blockbuster and more about these characters and their relationships. Just use it as this backdrop to bring in all these movie loving weirdos.”

Ramos does hope the show brings more attention to the real Bend location.

“I want the store in Bend to go on forever, whether I have a show or not,” Ramos said. “I will never not be rooting for Blockbuster.”

3. THE SET DOESN’T QUITE SMELL LIKE A REAL BLOCKBUSTER 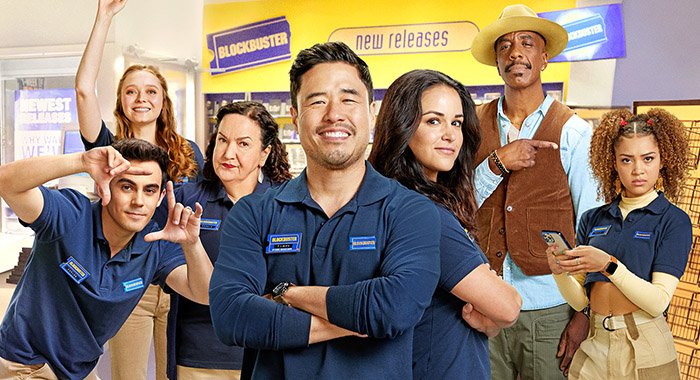 Anyone who rented from Blockbuster remembers the smell of plastic boxes and goodies by the counter. Fumero said the set didn’t quite capture that aroma.

“My memory of Blockbuster smell was like buttered popcorn mixed with a little mustiness,” Fumero said. “Ours smelled cleaner than that.”

Though set in Michigan, Blockbuster films in Vancouver, like many Hollywood productions.

4. BE SURE TO CHECK OUT ALL THE FAKE DVD COVERS 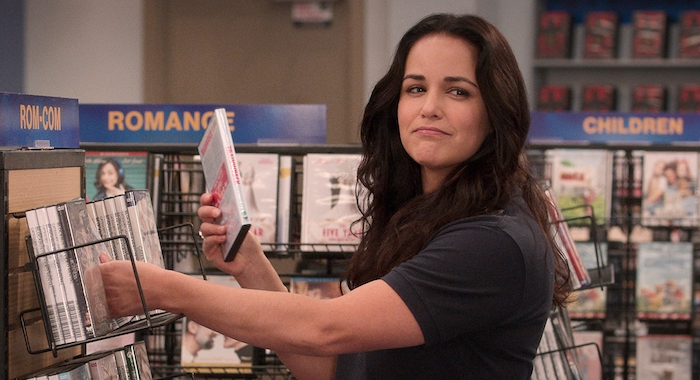 The walls of the Blockbuster set have a few real posters from Universal Studios movies; however, all of the DVD boxes have fake art for legal reasons.

“We were allowed to use real titles but we couldn’t use the art,” Ramos said. “We would have to license them which is very expensive to do. So a lot of those were made up by our art department and a lot of the names on there, it’s like, ‘Ha, I don’t remember Ricardo Spinacé being in The Bourne Identity.’ It’s just people who worked on our show.”

Some of the real movie titles with fake art include Hacksaw Ridge, American Pie, and Jacob’s Ladder.

“My favorite one is the box art for Selena,” Ramos said. “I don’t think we feature it, but it’s like a woman and she’s kind of dressed like Seinfeld-ish and she’s holding a mic. It says, ‘She had one dream,’ but it looks like a standup special for Selena as opposed to a Tejano singer story.”

5. THE UNIFORMS WERE 100-PERCENT ACCURATE 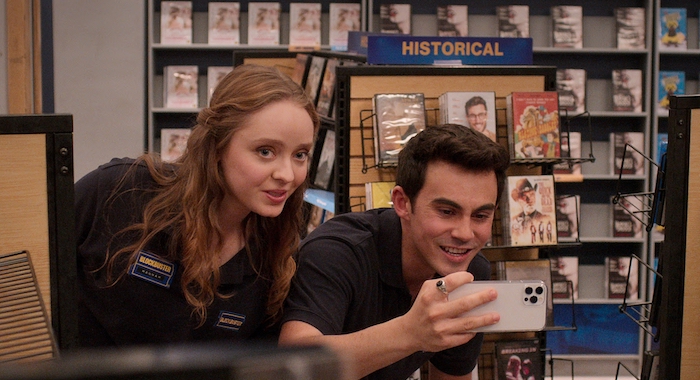 The cast enjoyed wearing the black polo shirt and khaki pants for the Blockbuster uniform.

“I gotta say, big ups to the Blockbuster wardrobe is surprisingly flattering,” Fumero said. “I very much appreciated working in stretchy kind of pants and sneakers. That was a big change for me and I was loving it.”

But, it wasn’t just casual. Park remembered how exacting the Blockbuster name tags were.

“But down to the detail, the Blockbuster logo on the shirts had to be at an 11-percent angle because that’s what it was,” Park said. “Everything had to be to a T. It was very accurate.”

“It was like the easiest wardrobe ever, I thought, because it was kind of a variation of the same thing every day and the polo shirt’s very comfortable,” Arthur said. “I think Hannah had two pairs of jeans she rotated between.”

Merediz lamented that the Blockbuster snacks compromised her uniform.

“They got a little tighter,” Merediz said. “All those snacks and catering. My pants got tighter and tighter, but they worked.”

6. ONE EMPLOYEE IS AN ASPIRING TARANTINO

Alvarez plays Carlos, who works at Blockbuster while he’s following his dream to be a filmmaker. He refers to Quentin Tarantino’s pre-directing career at a video store himself. In season 1, Carlos is still aspiring, but Alvarez knows what kind of movies he’ll make one day.

7. CONNIE IS A BLOCKBUSTER VETERAN 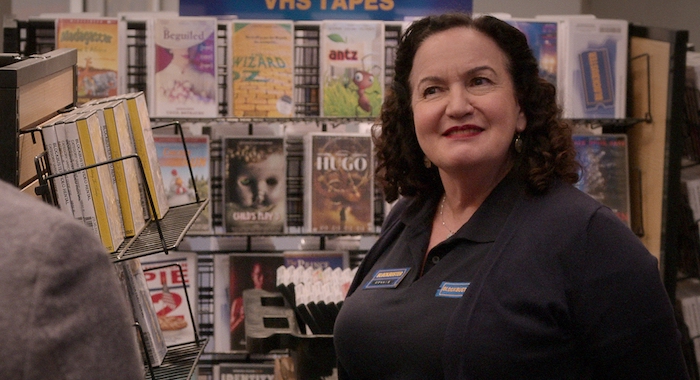 Teddy keeps Blockbuster open and retains his staff. Connie may be his longest employee.

“Connie has worked there, I would say, a lot of her whole entire life,” Merediz said. “She needs Blockbuster. She can’t live without it. It’s her expression. She needs to mother everybody, give advice so she definitely needs it.”

8. BLOCKBUSTER IS AN INVESTMENT FOR HANNAH

Hannah is only working at Blockbuster to save up. She eats and shops frugally so she makes the most of her Blockbuster salary.

“I admire how financially savvy she is and thrifty in terms of her eating habits, and she’s helping the planet,” Arthur said. “I think she’s really good about not wasting. I’m going to learn from that.” 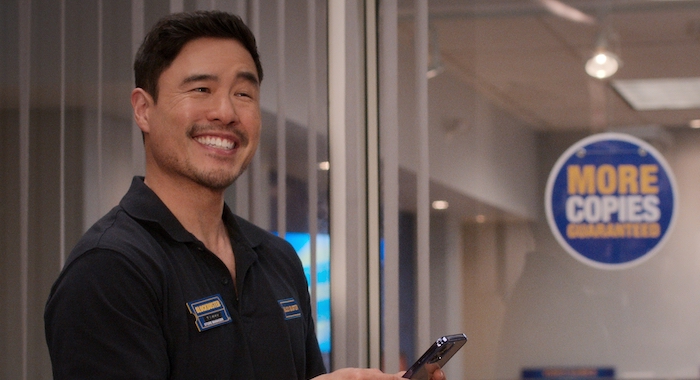 Park has been acting in film and television for 20 years. When he was in high school, he had a video store job, though not at Blockbuster. Now he can call all of that research.

Ramos has memories of being a customer at the Blockbuster Video on Huebner Rd. in San Antonio, Texas.

“My main memory of it was mostly my grandma bullying us into getting her Fools Rush In every week,” Ramos said. “No matter what we got, she wanted the same movie because she thought the height of comedy was Matthew Perry and Salma Hayek, like their families being from different worlds. Concepcion Ramos was amped on that.”

Merediz remembered taking dates to pick out videos at her local Blockbuster.