The Emperor may be striking back, the Resistance amasses a mammoth armada, and a favorite character prepares for the ultimate sacrifice.

Finality would seemingly be the major topic of Star Wars: The Rise of Skywalker. Since Disney released the first trailer for the film at Star Wars Celebration last April, the message has been loud and clear: The 42-year saga of the Skywalker family is ending. Star Wars itself may be a brand that will never die, but this version of it is on its final chapter.

Fittingly enough, the final trailer for The Rise of Skywalker continues this idea not only with its onscreen text, but a return to some ideas not yet used in the sequel trilogy. Let’s take a look at what this trailer offers us about the film and how it circles back to the first time audiences thought Star Wars was ending.

The final moments of Star Wars: The Last Jedi were hopeful despite the crushing odds. General Leia Organa’s (Carrie Fisher) Resistance against the First Order numbered so few people, they could all be evacuated from Crait aboard the Millennium Falcon. But as this trailer makes clear – thanks to Poe Dameron’s (Oscar Isaac) line about good people needing leadership – the Resistance will be reinforced.

A year has transpired since the events of both The Last Jedi and Star Wars: The Force Awakens, so we certainly hope Leia, Poe, Finn (John Boyega), Rose (Kelly Marie Tran) and the other survivors of Crait were able to drum up support. But the new trailer makes it clear that the level of reinforcement will be staggering. A shot later in the trailer indicates an armada will form for one final battle against the First Order that may rival the Rebel fleet in Return of the Jedi.

At the one-minute mark, we see this fleet of Resistance ships. It includes the Falcon, a number of Mon Cala frigates, and ships that fans are already speculating are the Ghost from Star Wars Rebels and The Mandalorian’s Razor Crest. But considering the echo of Return of the Jedi’s Rebel armada, we imagine these ships will still be outnumbered thanks to all those Imperial Star Destroyers glimpsed throughout the trailer.

The Thrones of Sheev Palpatine and the Emperor’s Return

The trailer is surprisingly heavy on thrones. The seat of Imperial power always followed Sheev Palpatine (Ian McDiarmid) wherever he went, but early drafts of Return of the Jedi featured a throne room hiding deep in the core of the Imperial capital planet, a world creator George Lucas planned to name Had Abbadon, but later changed to Coruscant to align with the Expanded Universe. At 54 seconds into the trailer, we see a version of that Had Abbadon throne bathed in a misty light. Combined with the voice of Palpatine saying “long have I waited,” we can conclude this is a throne he fashioned during his years in hiding. Although, a subsequent shot at 1:59 of Rey seemingly confronting Palpatine sat upon that throne may indicate this is all another Force dream.

But one throne is definitely not a dream: the seat the Emperor used in Return of the Jedi, which is clearly visible at 1:48 as Rey and Kylo prepare for a fight among the ruins of the throne room from the second Death Star. We have to admit this is a bold reuse of an Original Trilogy location as director J.J Abrams came under criticism for essentially remaking the original Star Wars with The Force Awakens. Placing the Sequel Trilogy’s primary protagonist and antagonist in that setting means Abrams intends to fully embrace aspects of Return of the Jedi to underscore that promised finality.

At the same time, you may be wondering if Palpatine will actually appear in the film. The appearance of an Imperial Star Destroyer emerging from ice suggests to us the Emperor and his Empire will make a startling return.

And then, the John Williams score stops for a moment in which new character Babu Frick works on protocol droid C-3PO (Anthony Daniels). The droid scans the people assembled (which includes Kerri Russell’s Zorri Bliss) and Poe asks, “What are you doing?”

The droid’s response: “Taking one last look, sir, at my friends.” It certainly suggests the character will make a noble sacrifice in The Rise of Skywalker.

If we allow George Lucas and the filmmakers who followed him the notion that events in Star Wars rhyme like poetry, then there’s something genuinely poetic about Threepio sacrificing himself for the greater good. He is one of two characters to appear in all of the Skywalker films and he is one of Anakin Skywalker’s abiding legacies; his end would be fitting in this film.

That is, of course, assuming whatever mission Threepio’s getting fitted for will end in his destruction. The scene appears to sync up with the shot from the D23 footage revealing Threepio with red eyes. We can probably assume he is being sent to a First Order base or Star Destroyer to obtain information. It could all be moments from his last hours or his line in this trailer could be played for laughs in the finished film as another example of his theatrical disposition.

Or, to put it another way, this is an echo of his “I’m done for” moment in the Jundland Wastes back in the original Star Wars.

But we hope Threepio (and R2-D2 for that matter) get a proper send-off. Whether that means they are destroyed or retired with Leia all depends on how the story plays out.

A Green World And The Death Star Remains

The bones of the second Death Star scattered throughout the trailer suggest a return to the forest moon of Endor. And, as it happens, we definitely see a lot of greenery in other parts of the trailer. But all of this could be another dodge, just as Jakku looked a lot like Tatooine. Abrams may want the scenery without the history, as landscapes pockmarked with the literal debris of previous Star Wars films continue to be highly effective images.

If it is Endor, the message is clear: This story was meant to end there — which is true (from a certain point of view). Going back to Lucas’s original drafts for Star Wars, the Empire (or the First Galactic Kingdom) was always meant to be defeated by forest-dwelling creatures. At the time, they were Wookies from the planet Yavin. But as things developed, Star Wars featured one Wookie and a rebel base situation on a jungle world. By the time of Return of the Jedi, Lucas reasoned people were too familiar with Wookies to find their homegrown rebellion against the Empire interesting, so he cut them in half and called the new creatures Ewoks – granted, the astronomical toy sales as the key motivation for the existence of Ewoks sounds as equally plausible. But Lucas never moved away from this forest planet conclusion and it appears Abrams will honor that idea in The Rise of Skywalker.

At the same time, all those shots of the Death Star ruins caught up in the sea suggests this green world may be more diverse than the forest moon of Endor as Star Wars planets tend to feature a single biome. Explosions in the Star Wars galaxy do not obey normal physics, so it is possible parts of the second Death Star were flung clear across the quadrant to a world with forests, plains (as glimpsed in the first trailer), and vast seas. But if Abrams wants to evoke Endor, he might as well use Endor and give it these other geographic and biological features. We signed up for recurring scenery when Return of the Jedi featured a second Death Star.

“Now Your Coming Together … Is Your Undoing”

But for all the provocative glimpses of an iceberg in space, Dominic Monahan’s character, space battles, and the Resistance riding horse-like creatures alongside Jannah (Naomi Ackie), one key line of dialogue stuck out to us: Palpatine’s declaration that “your coming together” will be someone’s undoing.

The line is interesting as it echoes his Return of the Jedi proclamation that Luke’s (Mark Hamill) faith in his friends is his greatest weakness. The conflict between the community Luke supports and isolationist Sith thinking is one of the great ongoing elements of Star Wars. Fans of the Knights of the Old Republic video games are given the choice to create strong bonds among the characters they meet or reject it all for the promise of Dark Side power. Knights of the Old Republic II: The Sith Lords complicates this even further as most of the characters who tag along on your adventure are Force-sensitive and have the potential to become Jedi or Sith. And in the Prequel Era, the isolation of the Jedi allows Palpatine to enact his plans without any sort of suspicion until it is far too late.

It should also be mentioned that Luke calls out overconfidence as Palpatine’s weakness.

If the Emperor had made his return in The Last Jedi, we’d be inclined to believe the “coming together” he refers to in the trailer is the Resistance, but we’re going to take a leap of faith and suggest he is addressing Rey and Kylo here. Does that mean the characters will ultimately undermine each other and switch sides? That’s unlikely as the film represents the last hours of nine-film epic, but it may tie up the still dangling notion of the Force needing to be in balance. Are Kylo and Rey the real chosen ones from the prophecy introduced in Star Wars: Episode I – The Phantom Menace? There is time enough to just about make that work.

Also, to come back to Palpatine’s weaknesses, his perception of future events also undermines him, and one imagines whatever he foresees for Rey and Kylo will also backfire on him.

Star Wars: The Rise of Skywalker is in theaters December 20. 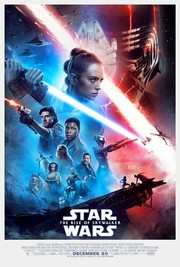 #1
Adjusted Score: 73.436%
Critics Consensus: Star Wars: The Rise of Skywalker suffers from a frustrating lack of imagination, but concludes this beloved saga with fan-focused devotion.
Synopsis: The battle between the Jedi and the Sith comes to a thrilling conclusion in this final chapter of the Skywalker... [More]
Starring: Carrie Fisher, Mark Hamill, Adam Driver, Daisy Ridley
Directed By: J.J. Abrams