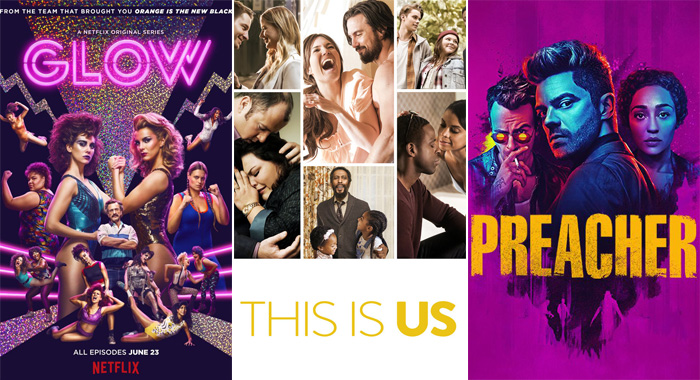 The Walking Dead’s Sasha, Sonequa Martin-Green, will lead the Star Trek: Discovery cast as lieutenant commander, EW.com reports. This follows several other castings in the CBS All Access series, including Michelle Yeoh as Starship Shenzhou’s Captain Georgiou, Doug Jones and Anthony Rapp as Starfleet science officers, and three Klingons (Chris Obi, Shazad Latif, Mary Chieffo). Jones will represent a new alien species in the Star Trek universe, while Rapp will portray the franchise’s first openly gay character. Martin-Green will reportedly continue as a series regular on The Walking Dead. Bryan Fuller (Hannibal) recently stepped down as showrunner and executive producer on the series to focus on Starz fantasy series American Gods, which is based on Neil Gaiman’s 2001 book. Fuller will retain his EP credit on Discovery, according to Newsweek, while Gretchen Berg and Aaron Harberts took over as co-showrunners.

Alan Thicke, referred to as “America’s Dad” for his role as Dr. Jason Seaver on ’80s hit sitcom Growing Pains, died unexpectedly this week. A beloved actor, singer, songwriter, and talk show host, Thicke got his start in show business in his native Canada writing for the Canadian Broadcasting Corporation before going on to write theme songs for popular sitcoms such as Diff’’rent Strokes and The Facts of Life and game shows including The Joker’s Wild, Celebrity Sweepstakes, and the original Wheel of Fortune. Thicke also authored two books and continued as an actor throughout his career, most recently appearing in This Is Us and season 2 of Fuller House. Thicke, who was 69, died of an apparent heart attack while playing hockey with his son on December 13. He is survived by his three sons and wife. “My Father passed away today,” wrote singer-songwriter Robin Thicke in a post on Instagram. “He was the best man I ever knew. He was the best friend I ever had.”

Works in Progress: Foxy Brown Hulu Adaptation, The Honeymooners Reboot, Spinoff How I Met Your Father, and #Blessed

Cult movie Foxy Brown is headed to television with a series adaptation starring Meagan Good (Minority Report) in the iconic role originally played by Pam Grier. The project, executive produced by Good’s husband DeVon Franklin (Woodlawn) and Tony Krantz (Blood & Oil), has landed at Hulu for development. Empire co-executive producer Malcolm Spellman and Hand of God creator Ben Watkins will write the TV version. Good will also serve as a producer on the series. Zing! Pow! Boom! CBS has put into development a modern-day reboot of one of television’s most iconic comedies: The Honeymooners. The multi-camera comedy hails from Bob Kushell (The Muppets), who will pen the script and executive produce. A new How I Met Your Mother spin-off in the works for next season, Deadline reported. How I Met Your Father will be an ensemble show, telling the HIMYM story from a female point of view. This Is Us co-executive producers Isaac Aptaker and Elizabeth Berger have been brought on board to pen the script. And NBC is developing #Blessed, a single-camera workplace family comedy from @midnight executive producer Alex Blagg (Workaholics), along with the Jackal Group (The Rocky Horror Picture Show: Let’s Do the Time Warp Again), Sonar Entertainment, and Universal TV.

Two reality shows experienced some legal drama this week. Deirdre and Scott Gurney, the producers of A&E hit Duck Dynasty are being sued by the ITV network for fraud and self-dealing after an investigation that led to their termination of employment. In 2012, the Gurneys sold a 61.5 percent stake in Gurney Productions to ITV for $40 million. They stayed on as co-CEOs while secretly starting Snake River Productions which bought distribution rights to a new reality show, Northern Territory from Gurney Productions for $3.6 million. The suit, filed in California Superior Court, alleges that the purchase inflated the company’s pre-tax earnings and deceptively appeared to increase the Gurneys’ leftover minority stake in the company. The suit claims: “every dollar that the Gurneys spent to purchase rights from the Company through Snake River would have been paid directly back to the Gurneys several times over through distributions and under the terms of the Operating Agreement’s buyout provisions.” The lawsuit also states that the Gurneys took a distribution from Gurney Productions that it claims is “self-dealing.” In other legal news, a police situation involving Tarek and Christina El Moussa of HGTV’s Flip or Flop six months ago has led to their separation. Police showed up to their Orange County home responding to “a call of a possibly suicidal male with a gun,” which the couple later called an “unfortunate misunderstanding.” The couple also said no violence was involved and that the police presence reflected “an abundance of caution.” No charges were filed. The couple has sought counseling and continues to work together professionally, though TMZ now reports that Christina is now dating a contractor who witnessed the incident.

Oscar Hosting Doesn’t Pay as Well as You Might Think

Jimmy Kimmel revealed to Los Angeles radio hosts Kevin and Bean of KROQ that he’ll make $15,000 for hosting the Oscars. “I think it’s illegal to pay nothing,” Kimmel quipped. What? You thought Oscar duty made a person rich? (Oscar talk begins at 74:24 in the podcast, and the reveal happens at 76:55.)