Teen angst, family problems, Damage Control, and a new Marvel nemesis? It is a lot for Kamala Khan (Iman Vellani) and a lot for viewers of Ms. Marvel. The series continues to delight with its Jersey City locale and surprising specificity of detail, but what of all its Marvel-ness? Only one of Kamala’s comic book antagonists have appeared and, halfway through its debut season, the program has yet to introduce a typical superhero crisis — or at least the kind generally taking place in the Marvel Cinematic Universe with all the Ten Rings, Kingpins, and Celestials running about.

But at least we have some idea of the true villain now.

So let’s take a look at Ms. Marvel now that it has reached the halfway mark and see what we can determine about Kamala’s new reality, her foes, and how her family may still be a source of strength.

Spoiler alert: The following contains plot details from Ms. Marvel episode 3, “Destined.” Stop reading here if you have not watched the episode and wish to avoid spoilers.

Kamala Learns of the Power Within 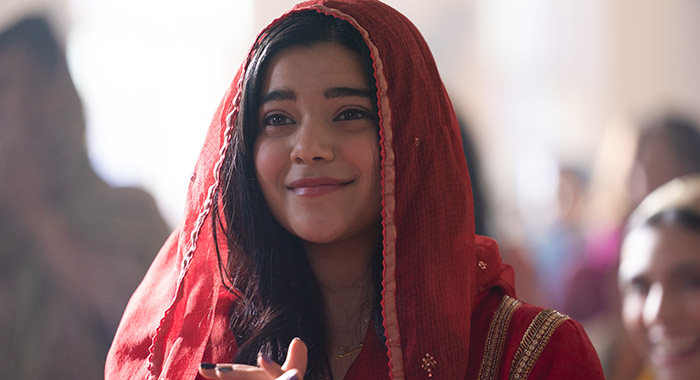 As we surmised from the moment Marvel first made clear Kamala’s powers would be different, the bangle — which we mislabeled as a “bauble” a few weeks ago — is amplifying something inherent within Kamala. The true nature of it is still up for debate, though, as it seems the why of Kamala’s powers is the real mystery unfolding across Ms. Marvel’s first season.

But one thing we’re pretty sure about: the bangle is, in fact, a Kree Nega-band.

The episode 3 flashback nearly confirms this as we see Kamala’s great-grandmother, Aisha (Mehwish Hayat), and Kamran’s mother, Najma (Nimra Bucha), digging through a temple somewhere in British-control India circa 1942. They manage to find a bangle attached to the disembodied arm of, seemingly, a Kree lost to time. Najma almost immediately asks about the other bangle as both are required for their plan.

For a time in the comics, Mar-Vell (played by Annette Bening in Captain Marvel), and Rick Jones would swap places by clanging the bands together. One would appear in the Negative Zone — a universe of anti-matter already contracting as it is somehow much older than the positively-charged Multiverse — while the other appeared in the conventional Marvel Comics universe. Needing both for transport seems crucial and, as we discussed previously, the bands also amplify the wear’s mental powers to create apparent superhuman abilities.

Although, nothing in the MCU is one-for-one to its comic book counterpart and the bangles of Ms. Marvel could still prove significantly different. That is already on display with the way Kamala manifests her powers. But that could also speak to the origin of her powers.

Background on the Djinn 0f the MCU 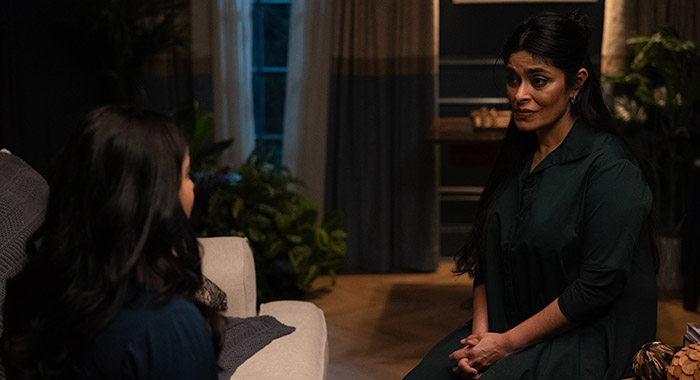 While the Djinn have been mentioned in passing throughout the series, episode 3 introduced the idea that Kamala may be one herself. As Najma explained, she, her group of friends, and Aisha are all exiled Djinns looking to get home via the bangles. But Najma lost track of Aisha, who in turn had a family and passed on the bangle. But as these extra-dimensional beings are borrowing the term from Earth folklore, we’re hard-pressed to accept Najma’s explanation — to say nothing of the way her subsequent behavior re-frames her initial talk with Kamala.

There are other names Najma suggests, like Noor (the Arabic word for “light”) and the Clandestine. The latter might be a shout-out to Marvel Comics’ Clan Destine, as some online have suggested. Created by Alan Davis in the mid-1990s, the group were all the progeny of an immortal man and a Djinn, concepts that sync up with what Najma said to Kamala. But as Najma only counted the name as one of many given to her kind across the centuries, it is unclear how much of the concept will be worked into Ms. Marvel or other corners of the MCU.

Between Najma’s cagey exposition and her stated need to return home, we can’t help but wonder if her team is, in fact, a gaggle of beings from the Negative Zone exiled for obscure reasons.

As it happens, the Zone is said to be largely vacant, but there are pockets of advanced civilization, and it is always possible one of those societies treats the positive-matter Multiverse as a prison. In the comics, the Fantastic Four’s Reed Richards regarded the Negative Zone in much the same way, depositing his foes and his garbage in the collapsing universe.

Nevertheless, we’re still stuck with a mystery: is Kamala a Djinn or the decedent of Negative Zone exiles? If the latter, why is it imperative that Najma get home now?

Is Kamran Flipping the Script on His Character? 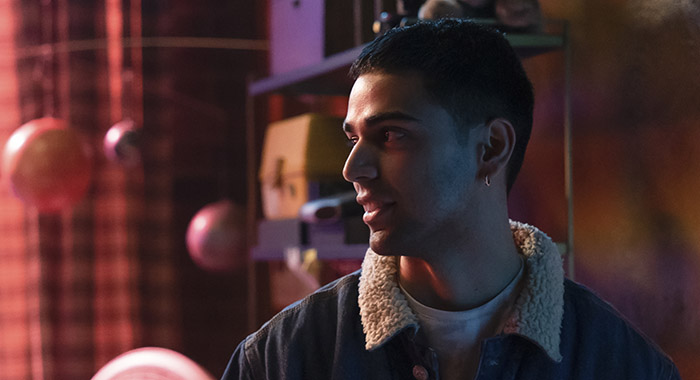 Najma’s heel turn also alters one of the few assumptions Ms. Marvel fans has about the program going in: Kamran (Rish Shah) turning out to be a bad guy. In his comics appearance, Kamran is an Inhuman with a past association with the Khans. Soon after his family returned to Jersey City and his own powers emerged, he saw Kamala change into Ms. Marvel. Getting close to her, he eventually kidnapped her and delivered her to Lineage, an Inhuman mob boss looking to remove all conventional humans from the planet.

But considering how the television version of Kamran was willing to let Kamala enjoy the wedding and how he attempted to hide the text conversation from his mother, it seems he may be less of a scoundrel than one might expect. Of course, at this point, it is still impossible to tell who is trustworthy among the Clandestine. Nevertheless, Namja’s quick slide to antagonism suggests he will be a bit more honorable than his comic book counterpart. What that means for him long term, though, is a thornier question.

If Damage Control Is Not The Enemy, What Are They? 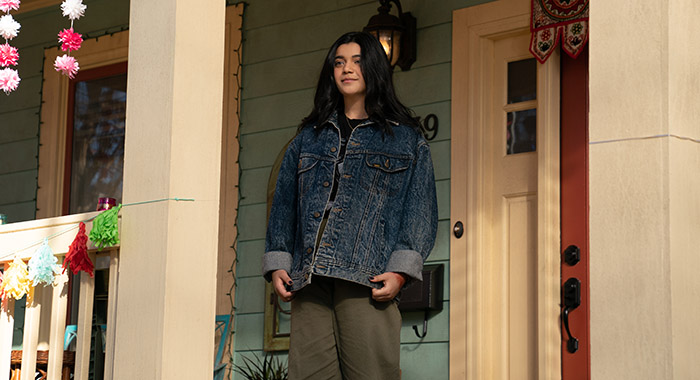 With Najma and her associates now identified as the season’s antagonists, where does that leave Damage Control? There’s still plenty of antagonism on their part — just look at the way they roll into the mosque and the methods used to grill Zoe (Laurel Marsden). Also, Agent Deever’s (Alysia Reiner) reference to an “unidentified enhanced individual” supports our hypothesis that they ended up with maintaining Sokovia Accord enforcement. Based on their behavior in episodes 2 and 3, we’re going to assume that role made them far more militaristic than they were prior to Captain America: Civil War. But also, being an arm of the U.S. Department of Justice, it is easy to see how a Pakistani community across the river from New York would view them with suspicion.

As we asked a few weeks ago, what does Accord compliance really look like? Is it just as simple as filling out a form or does Damage Control take the person away for evaluation? Is an identified enhanced person conscripted into the army? And if this is the way the U.S. treats people newly discovering their powers, what do other countries do to maintain Accord compliance?

Now that Najma’s group is in their custody, we might get a closer look into how they operate. 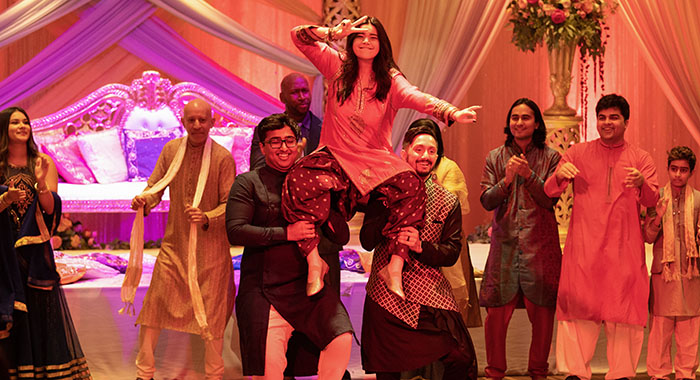 With all the interdimensional puzzles and shady characters to consider, it might be tempting to ignore Ms. Marvel’s key strength: its depiction of a Pakistani community in the United States. Episode 2 featured some great moments playing to that strength, like Nakia’s (Yasmeen Fletcher) frustration with being caught between the two cultures and Kamran’s accent switch to throw off Kamala’s brother, Aamir (Saagar Shaikh). Episode 3, meanwhile, featured Aamir’s wedding to Tyesha Hillman (Travina Springer) and — at long last — a few moments between Kamala and her mother that felt warm and relaxed.

The scene in which Muneeba (Zenobia Shroff) tends to Kalama’s wounds, in particular, is something the show desperately needed. As we mentioned a couple of weeks ago, Muneeba’s behavior in the first episode could be perceived as manipulative. Or, at the very least, it set her up as an antagonist. But in the bathroom scene, she finally shows Kamala some true sympathy. Sure, the solutions she offers may not work for Kamala, but the fact she could at least recognize her daughter’s feelings and offer some reassurance feels big and different, an example of the genuine love between them. The show really needed a moment like it, and we’re glad it happened at the halfway point.

And since Najma is auditioning to be the big bad, we’re less inclined to see Muneeba’s reticence to share what she knows about the bangle as a sign that she is truly an antagonist.

That said, the time to share with Kamala is fast approaching. It will be interesting to see just how it fits into Kamala’s request to go to Karachi. At least, we’re assuming she’s going to ask first. While most Marvel shows might depict a teenager running off, the bond depicted between Kamala and Muneeba in episode 3 suggests it may be as much a family trip as Kamala’s continuing search for answers in her more “Marvel” story.

What’s in a Name? 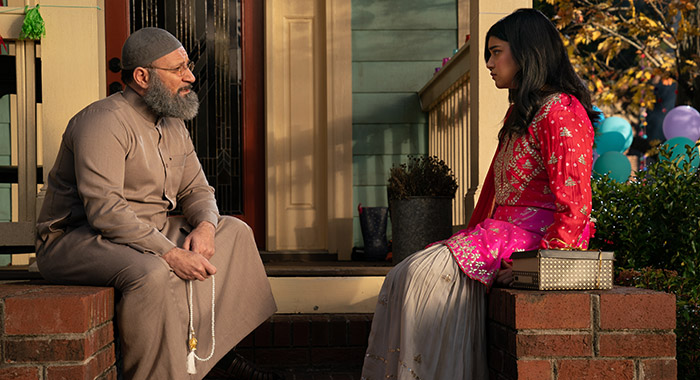 Curiously, episode 3 introduced a new runner – everyone dislikes “Night Light” as a superhero name, but neither Kamala nor Bruno (Matt Lintz) can come up with a better name. The fact Kamala hasn’t immediately jumped on the “Ms. Marvel” name is interesting and, potentially, thematically resonant as her wish to be more like Carol Danvers (Brie Larson) is constantly criticized by those around her.

Although, it is worth noting that within the MCU, no one has ever gone by the name “Ms. Marvel.” In the comics, Carol was the first of several to do so, holding onto it for some time. But it was available when Kamala first became a hero and soon claimed it for her own. Within the show’s context, we suspect she may not get the name until the finale … and possibly thanks to Carol making a last-minute appearance.

Outside of what the name means in our world, Kamala’s inability to arrive at it also reflects her own uncertainty about being a hero. Sheikh Abdullah (Laith Nakli) offers her some wise counsel in episode 3 about doing good, and we imagine that will prove key in the latter half. Perhaps once she feels she has done some good in the world, she can finally have her superhero identity cemented.