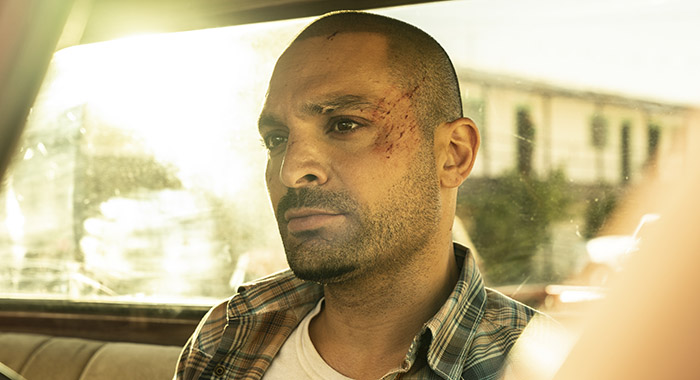 “No, it wasn’t me. It was Ignacio. He’s the one,” Saul Goodman exclaimed at gunpoint in the season 2 finale of Breaking Bad. The episode “Better Call Saul” aired in 2009, long before the Bob Odenkirk–starring prequel, Better Call Saul, hit AMC. Yet, in this one passing line of dialog, while Saul was confronted by a masked Jesse Pinkman (Aaron Paul) and Walter White (Bryan Cranston), the character Ignacio “Nacho” Varga, played impeccably by Michael Mando, was born.

Nacho has undergone a profound evolution since his early cartel days as Tuco Salamanca’s (Raymond Cruz) obedient right-hand man. And season 6 has found him in a precarious position. In the season 5 finale, Nacho assisted Gus Fring (Giancarlo Esposito) in his plan to destroy Lalo Salamanca’s (Tony Dalton) compound, allowing Fring to make a power play within the criminal cartel world. It was supposed to be Nacho’s final crime, as he was laying the groundwork to pursue a better life for himself and his father.

Spoiler warning: If you would like to avoid spoilers for Better Call Saul season 6 episode “Rock and Hard Place,” stop reading here, as we discuss major plot points from the episode. 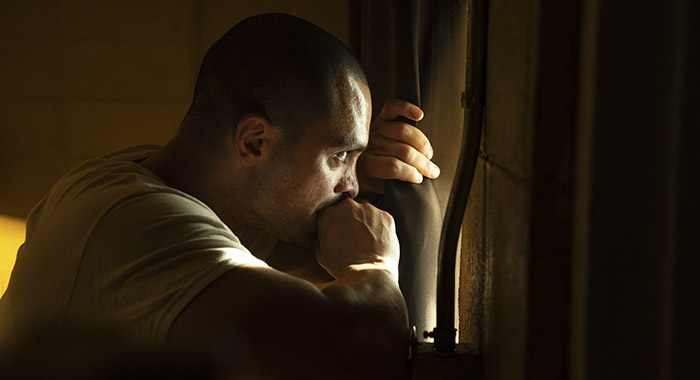 Nacho’s plan backfired. The mission to take out Lalo failed. And after evading capture in Mexico, going so far as to hide from the Salamanca cousins by submerging himself in an oil tank, Nacho faced two eye-opening truths about his fate: He was a pawn in Fring’s grander agenda, and he was going to die because of it.

“Rock and Hard Place” is Nacho’s swan song. It’s an episode that, thematically, runs parallel to Jesse Pinkman’s own journey to redemption in El Camino, the Breaking Bad sequel film.  But while both characters ultimately break good, in Monday’s episode, Varga’s life came to an end in the desert under the hot New Mexico sun.

Thirteen years after Saul Goodman uttered Ignacio’s name, Mando put a powerful punctuation mark on the Better Call Saul character. Rotten Tomatoes had a video call with the actor — emotional in talking about his final episode — about his experience playing the role over the past six seasons, the symbolism featured throughout Monday’s episode, and the character’s enduring legacy within the Breaking Bad universe. 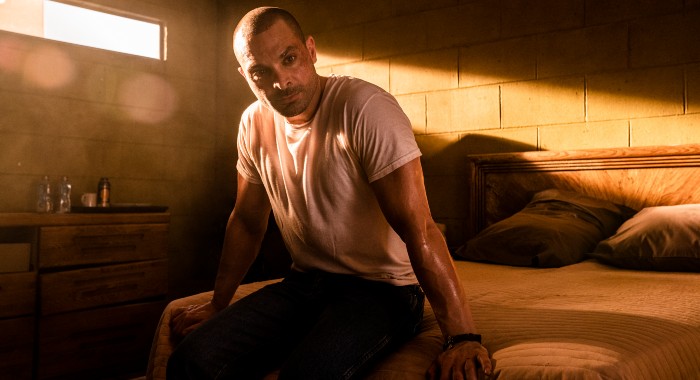 Aaron Pruner for Rotten Tomatoes: How has your perspective of Nacho changed over the past six years, and how has Nacho’s perspective of his environment and situation changed?

Michael Mando: To be on a show that’s like Breaking Bad and be the only character breaking good has been a tremendous surprise for me and a huge responsibility that the writers have given me to play. It fills me up with gratitude and responsibility to represent that sort of moral desire when the current of the show is really pushing hard in the other direction. And it makes for great, great drama.

How has Nacho’s perspective changed? Or has it even?

Mando: When I got this role, I researched heavily. I wanted to make the New Mexican people proud. I researched the history of the Aztecs and the Mayans. The historians on one side said that these people were savages who would sacrifice human life for the Gods to bring down the rain. But the historians from Latin America told a different story: The strongest men of the village played a competitive sport in front of the whole community. And it was the winners of that sport, who willingly sacrificed themselves for the greater good of that community. 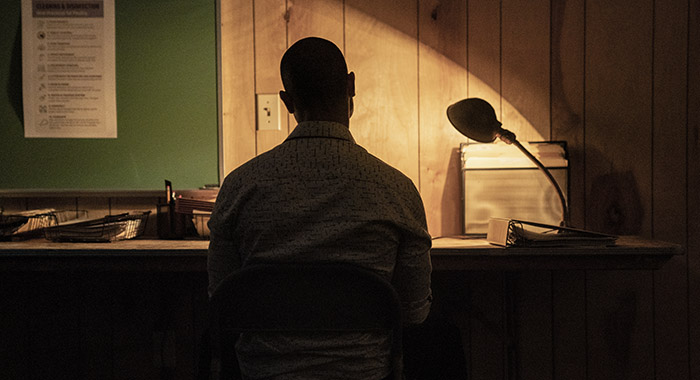 Can you walk me through Nacho’s state of mind in the episode’s opening moments?

Mando: That episode was so beautifully written and directed by Gordon Smith. And it was full of symbolism. If you zoom in on the white shirt that Nacho wears, you’ll see symbols on it. The piece of jewelry that he keeps, the washing himself from the darkness, the last meal, the last call, the last goodbye, and then, finally, the trial in front of the heavens. Right there, under an open sky, he’s someone standing up for what he believes in, in the face of these sociopaths.

So throughout that particular opening, Nacho was a man who knew he had his back against the wall. Like the episode title says, “Rock and Hard Place.” He knew that this was his defining moment in life. And his super-objective was to secure the safety of his father who represented virtue and integrity in his universe and his community.

Talk about the phone call with his dad. What does that call signify to Nacho? Was this the moment he accepted his fate? Was this when he decided how he’d go out?

Mando (visibly emotional at the recollection): When a character is so beautifully written, you can point to specific moments and say, “That’s when Nacho becomes Ignacio. That’s the moment where he becomes the icon of what he was meant to be. He becomes a hero.” He’s staring the sunset in the eyes, and he has a window to escape. He calls his father and the subtext is: Would you run away with me and live happily ever after? And his father says no. At that moment, Nacho knows: In that case, I will sacrifice my life for you. 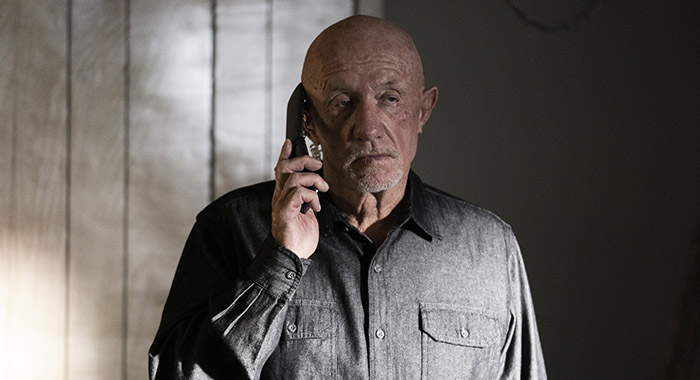 How would you describe Nacho’s relationship with Mike? Is he the father figure Nacho was looking for?

Mando: Mike represented a friend. And sort of a confidant, as well. At some point, Nacho transcends that relationship and starts breaking good. While Mike tragically continues to break darker and darker, deeper and deeper into the bad.

Is this a changing dynamic Nacho was always aware of?

Mando: Look, Nacho always loved and respected Mike. But I think Nacho was a little bit more of an idealist and a romantic. Nacho meant what he said and was willing to die for what he believed in. I think Mike has a slightly more duplicitous relationship with virtue and morality. Nacho makes a decision that he will live and die for the right thing, and he will do it here and now. And I think Mike isn’t willing to. 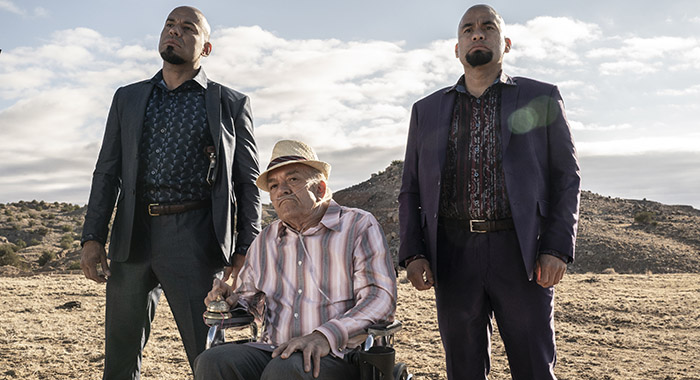 Throughout the show, Nacho has presented himself in a reserved, quiet, respectful manner. But his final scene found him letting out all his anger, aggression, and rage towards the Salamancas. What was your experience filming that scene?

Mando: It was an unbelievable experience. That day, they started the cameras on the Salamancas and Gus Fring and his men. By the time they turned around on me, a huge sand storm hit and we stopped and ran inside. The next day, when I shot the scene and I went home, lightning struck the tree in front of my house and fell in front of my driveway. I couldn’t get home.

Maybe the universe was trying to tell you something?

Mando: You know, I had cut my finger the day before my first day really deeply on the nerves, and I couldn’t feel anything shooting up to my left shoulder. So I had to take about a week and a half off. So they shot everybody’s scenes first. When we finally got there, it was an unbelievable magical moment. The crew had Nacho shirts on with little teardrop tattoos on the eyes. It was just it was a moment that meant so much to so many people.

Do you believe Nacho got the end he deserved?

Mando: The iconography of Nacho is of sacrifice, true love, and courage in the face of insurmountable adversity. So to play a character who truly sacrifices himself for the integrity and the virtue that he aspires to is the most heroic thing. They’ve turned Nacho into this incredible character, who is probably the only one here that’s breaking good. That responsibility that the writers have given me fills me with tremendous gratitude. He has really become a dream role. 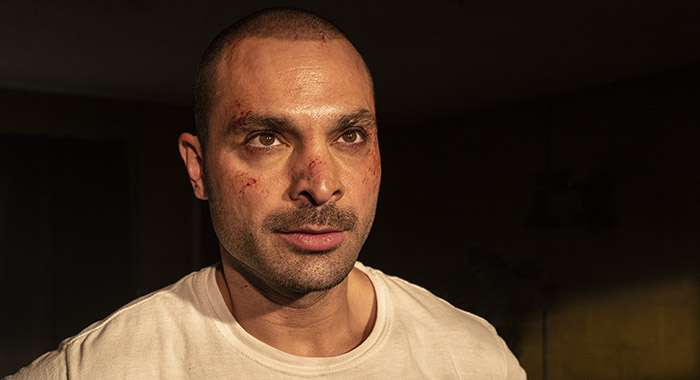 Bob Odenkirk and Jonathan Banks already have their next projects lined up. What’s next for you?

Mando: Well, what would you like to see me in?

Oh, it’s up to me? Well, considering your background in theater, maybe something Shakespearean would be fitting.

I’m in. And it goes without saying: Congrats on a stellar run as Nacho. To use paraphrase, your Emmy-worthy performance was “transcendent.”

Mando: Thank you. Please put that in so I can show that to my mother.