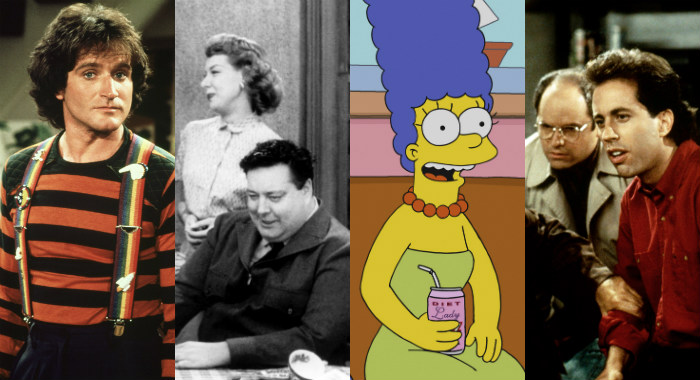 Rotten Tomatoes asked some of our favorite comedians and comedic actors — from big-screen all-stars like Jim Carrey and Ben Stiller to younger voices like Jerrod Carmichael and Rachel Bloom — to tell us their favorite TV comedies. Some chose their favorite sitcoms from childhood, some picked what they’re bingeing right now, and some picked the shows that made them want to go into comedy. The series they chose range from those from the 1950s to shows that are airing or streaming right now, but these comedy series all have one thing in common: They’re funny to some of the funniest people on the planet.

“It’s kind of a tie, but I’m going to say one inches the other out a little bit: Cheers is probably my favorite, just because I’m a Boston girl, and that’s the kind of show I go to when I want to just chill out. All in the Family was probably my favorite show growing up.”

“It’s Garry Shandling’s Show probably had the biggest impact on me more than any other show. I was in elementary school when it came out, and I was always a fan of multi-camera sitcoms because that’s what I grew up on. This show took that format and played with it in such profound ways that I just thought, ‘Oh wow, you can do anything on TV.’ Also Garry Shandling, I was just a huge fan of his.”

“Currently I am enjoying Catastrophe and Search Party. I love both of those shows a lot. I think Search Party is amazing — how they have so much tension, and you’re actually invested in what is happening next in the story. Also there’s so much comedy, and I don’t feel like they hold any of their comedy back. They let John Early go pedal to the metal, which I love to see. I think there’s a trend right now where in comedy, you’re supposed to tamp down your instincts and you’re supposed to be very reserved, but I grew up watching Martin and I loved it. I grew up watching Jim Carrey on In Living Color. I like big swings, and I’m always hoping comedy is going to shift back to that.”

“That’s almost impossible to answer because you love different things for different reasons. I’ll go through various infatuations. I’ve been rewatching Golden Girls a lot because I think Bea Arthur is perfect. So if you ask me right now, I’ll be like ‘Oh, that.’ Nathan For You I think is incredible. There are scenes from Insecure that genuinely kill me, that I think are really great. It just depends.”

“I think I have to go back to SCTV. That for me has always been — that was the first comedy show that really, to me, broke barriers and was so funny. It made me want to get involved in comedy. The cast and what they created — a lot of people don’t know the show, but that, to me, is my favorite.”

“It’s a toss-up between The Chappelle Show and Friends. They’re shows that I have been tuned into since the beginning, and I saw everybody growing, and I just love them both. Friends, everybody was funny. There’s no real straight character. Chappelle was very revolutionary and his comedy — you never knew where the joke was coming from. And he’s my favorite standup comic, too.”

“The comedy that made me want to do television is All in the Family. I was 12 years old when it premiered. I’d never seen anything like it. I loved the comedic dynamic of the family, and I was blown away that the show had a real serious dramatic vibe to it where you couldn’t believe what you were listening to, where you were crying one moment and really laughing the next. I think All in the Family was the first to really combine that.”

“Family Ties — that episode ‘My Name Is Alex’ made me want to be an actor. I was like, ‘Yeah, this dude’s gonna be a star.’ Because it was so beautifully done. It was like a one-man show. But it was beautiful and it was funny and it had so much heart in it. The Simpsons — the first thing I ever really laughed hard at was when Bart was singing the ‘Jingle bells, Batman smells.’ That’s the first hard laugh. I was like, ‘If this is what comedy is, I’m in!'”

“I keep thinking about Three’s Company. I just love the farce of that show, and I think John Ritter was such an incredible talent — that’s a big one for me.”

“I loved The Muppet Show growing up. I remember my father and I literally falling off our chairs with laughter. I cried the day Jim Henson died. That was a special show. Also, as both a freak and a geek from Detroit, Michigan, Freaks and Geeks has a special place in my heart.”

“If I were to answer as my elementary school self, I’d say ALF and it wouldn’t be close. There were seasons of SNL that were truly inspired and the stuff of legend. However my answer is the short-lived and massively under-appreciated Sports Night. I have watched more episodes of Sports Center than any other show by an embarrassing margin, so the marriage of a format I knew so well with Sorkin at the peak of his powers and a dream cast translates to the comedy series box set I own. …The ensemble fit together like the kind of puzzle that you frame once you finish it. I think. I don’t really do puzzles. Incidentally, Jeremy and Natalie are probably my favorite TV couple of all time.”

“Probably The Larry Sanders Show on HBO, I loved that one. I just thought Garry Shandling was brilliant on that. I like the writing; I like Rip Torn. I think Judd Apatow started writing on that show, so a lot of that humor that he’s brought into movies was almost gestating on that show. Lots of cool guest stars, kind of how we do [on Brooklyn Nine-Nine].”

My favorite TV comedy of all time is Curb Your Enthusiasm. Larry David is my spirit animal.