Paul Rudd, Carrie Coon, Finn Wolfhard, McKenna Grace, and writer/director Jason Reitman know all about the legacy of the Ghostbusters series, with Reitman’s dad Ivan being the director of the original ’80s movies. That’s why Rudd and Coon share their first-hand experience about how to handle the proton packs on camera. Wolfhard and Grace talk about how the Ghostbusters fandom is like one big family, while new young stars Logan Kim and Celeste O’Connor illuminate what it’s like entering the series so early in their careers. Meanwhile, Reitman lays out the pros and cons of having your dad at work everyday.

Ghostbusters: Afterlife is in theaters on Friday, November 19, 2021.

Fans of the Ghostbusters franchise have been waiting for decades for another true sequel to the 1984 paranormal comedy and its 1989 follow-up. Regardless of whether you enjoyed the 2016 reboot, Ghostbusters: Afterlife has a lot to live up to. Fortunately, the first reviews of the new movie agree that the devoted fanbase will be pleased, and they’ll find a young new star to follow into more installments. There are some disagreements on just how much Afterlife works as both a sequel and as a movie overall, but it seems you don’t need to be afraid of this effort.

Here’s what critics are saying about Ghostbusters: Afterlife:

Is this the Ghostbusters sequel fans have been waiting for?

“Ghostbusters: Afterlife emerges as a wildly successful next installment… An utter joy to take in.” – Joey Magidson, Awards Radar

“This new spin gets it soooooo right… A warm, funny, exciting, nostalgic, emotional, and altogether winning return to the pure joy of that 1984 classic.” – Pete Hammond, Deadline

“In terms of being a Ghostbusters movie, what Jason Reitman and Gil Kenan achieved with this film is incredible. This is the Ghostbusters sequel that I have been waiting my entire life to see.” – Scott Menzel, We Live Entertainment

“Make no mistake, this is a Ghostbusters movie through and through.” – Rosie Knight, IGN Movies

“It’s not quite the same as the Ghostbusters we know, but it entirely feels like Ghostbusters.” – Olly Richards, Empire Magazine

“The good news for Ghostbusters fans is that Afterlife does nothing to tarnish what has come before.” – Peter Debruge, Variety

“One of the best sequels in recent memory.” – Marya E. Gates, Nerdist

“One of the best movies of the year.” – Kaitlyn Booth, Bleeding Cool 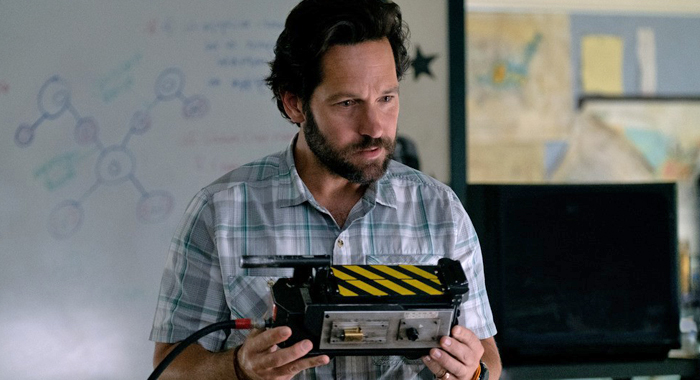 “Yes, there are fan service moments in the movie, but how these moments are handled makes them stand out even more.” – Scott Menzel, We Live Entertainment

“Reitman’s biggest swings are sure to create divisive and heated conversations amongst fans of all generations.” – Sean O’Connell, CinemaBlend

“The weakest parts of the film really are when it leans a little too hard into fan service, with too heavy a knowing wink.” – Marya E. Gates, Nerdist

“You go from caring about these characters to being distracted by all of the references, and that’s a real shame.” – Germain Lussier, io9.com

Does it bring anything new to the franchise?

“Very new in all the right ways.” – Pete Hammond, Deadline

“Ghostbusters: Afterlife is a more grandiloquent approach than the original flick… It mostly works because of how winning the new elements are.” – David Crow, Den of Geek

“It’s rich with affection for its source but excited about new ways to play with it.’” – Olly Richards, Empire Magazine

“Plenty here is shiny and new… It shines brightest when Reitman finds new ways to spin these callbacks, rather than just repeat them.’” – Marya E. Gates, Nerdist

“It’s endearing to see [all the] props back in play, and refreshing to see how Reitman uses them in drastically different fashion than his father did.’” – Sean O’Connell, CinemaBlend

“Afterlife succeeds precisely by not messing with the formula… This is a movie that feels like a product of the ’80s in a good way.’” – Jane Crowther, Total Film

“The story these characters are sucked into is so directly tied to the original… Ghostbusters: Afterlife feels like a film scared to be its own thing.’” – Germain Lussier, io9.com 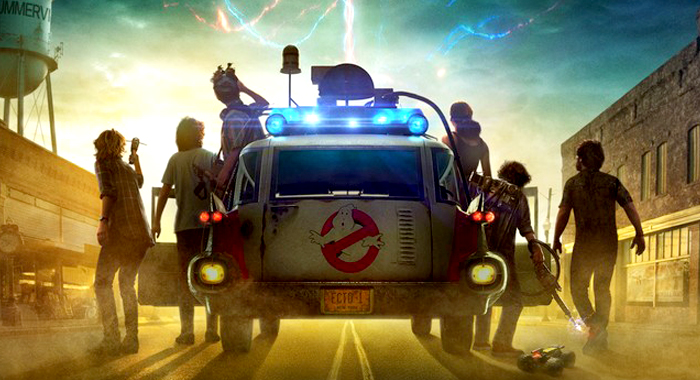 What if you’ve never seen Ghostbusters?

“You can go into this movie without seeing any of the previous movies, and you’ll like it just as much as a fan will.” – Kaitlyn Booth, Bleeding Cool

“It manages to balance that fine — and financially lucrative — line between pleasing fans of the original and creating something accessible for new audiences.” – Rosie Knight, IGN Movies

“This film will open the doors to those who may not have seen the original. I can see this film becoming a massive hit and generating a fan base.” – Scott Menzel, We Live Entertainment

Does it have broad appeal?

“There is plenty here for everyone to like. This is a movie that is going to be enjoyed by the kids in the theaters just as much as the adults.” – Kaitlyn Booth, Bleeding Cool

“More akin to bygone family-focused adventure films like Honey I Shrunk The Kids than the first two films, there’s plenty here for viewers of all ages.” – Marya E. Gates, Nerdist

“One of those rare movies that’s a genuine four-quadrant treat… A film that will entertain adults as much as kids, fans and much as newbies.” – Jane Crowther, Total Film

“[It] retains the other key aspect of the original formula: the deadpan drollery and sharp timing… Afterlife’s engaging cast has the comic beats down.” – Sheri Linden, Hollywood Reporter 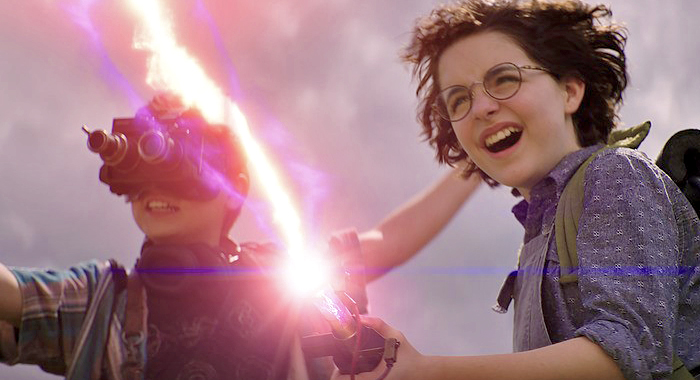 Does it have heart?

“Bring the tissues because you are going to need them.” – Scott Menzel, We Live Entertainment

“Certain moments, which I wouldn’t dare spoil, literally filled my heart to the brim…It’s the emotion of it all that works best, making a good flick great.” – Joey Magidson, Awards Radar

“The younger Reitman’s film resorts to extreme, and frankly questionable, measures to tug at the pre-existing fanbase’s heartstrings.” – William Bibbiani, The Wrap

“In its climactic sequence, the movie gives in to a more than a bit of self-congratulatory schmaltz — catnip for fans.” – Sheri Linden, Hollywood Reporter

“The script as a whole doesn’t just respect the source material, but it also respects the characters and the audience.” – Kaitlyn Booth, Bleeding Cool

“There’s so much plot, character, and backstory stuffed in, a few crucial connections get frustratingly pushed to the side or left way too vague.” – Germain Lussier, io9.com

“It takes nearly an hour (51 minutes, to be exact) for any ghosts to appear.” – Peter Debruge, Variety

What about the special effects?

“Special effects have advanced light-years since 1984, and yet Reitman (the younger) makes the respectable decision to stick to the look of the original film.” – Peter Debruge, Variety

“Those effects are certainly smoother this time around, even while keeping within the visual vernacular of the 1984 film.” – Sheri Linden, Hollywood Reporter

“The practical effects make the visuals in Ghostbusters: Afterlife far more like the films earlier in the franchise than most of today’s effects-heavy films.” – Marya E. Gates, Nerdist 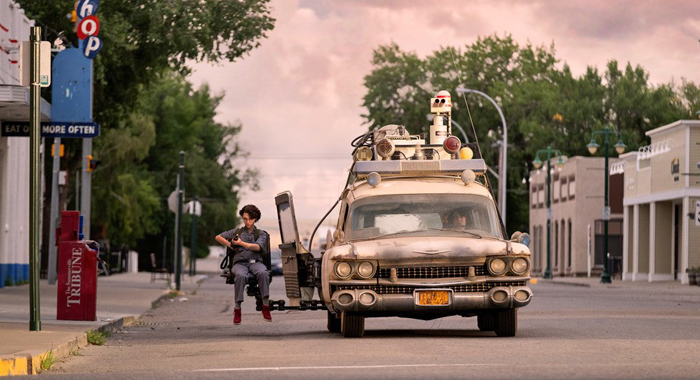 “McKenna Grace as Phoebe walks away with pretty much the entire movie, which is really impressive considering the caliber of talent that we have here.” – Kaitlyn Booth, Bleeding Cool

“McKenna Grace is the kind of talent that only comes around once in a generation.” – Rosie Knight, IGN Movies

“Grace is just aces here…This is Grace’s show, and she really makes it a main event.” – Joey Magidson, Awards Radar

“You simply cannot look away from Grace when she is on screen. She’s funny and smart, but in a way that feels authentic and true.” – Marya E. Gates, Nerdist

“McKenna Grace gives the standout performance..if the franchise wanted to move forward with her in a leading role, I’d say we were in good hands.” – Sean O’Connell, CinemaBlend

“Logan Kim as Podcast, Phoebe’s motormouth classmate who documents everything, is like a fun-size John Candy.” – Olly Richards, Empire Magazine

“Kim proves himself as a new comedic talent. His scenes with Grace are some of the best in the movie and deliver a few of its biggest laughs.” – Rosie Knight, IGN Movies 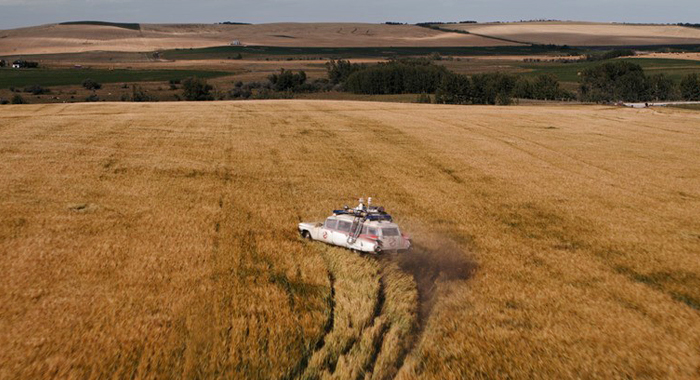 Does director Jason Reitman do his father proud?

“The real star here is Jason Reitman who, like Phoebe, rediscovers and reinvents his own family cinematic legacy.” – Pete Hammond, Deadline

“You can feel Reitman’s thrill in it, the enthusiasm of a man who has known Ghostbusters since he was six.” – Olly Richards, Empire Magazine

“Jason Reitman was literally born to make this movie… with all the love and affection of a fan, but with the moviemaking chops that have nearly won him an Academy Award.” – Joey Magidson, Awards Radar

“Reitman’s direction may be sharp and professional, but that’s only in the service of familiar material, so it falls to an excellent cast to make the most of a very repetitive situation.” – William Bibbiani, The Wrap

Will we want another Ghostbusters movie?

“The film does enough world-building that you leave hoping to see more from these characters in the future.” – Germain Lussier, io9.com

“If this serves as a launchpad for a new phase in the franchise, with such a dynamic lead as Phoebe at the helm, I’m willing to follow her anywhere.” – Marya E. Gates, Nerdist

“By the time the lights go up, one gets the distinct impression that all that really mattered was clearing the slate and setting this franchise up for future exploitation.” – William Bibbiani, The Wrap

Ghostbusters: Afterlife is in theaters on November 19, 2021.

This week on streaming video, Netflix has a whole new season of House of Cards, so you can wallow in Frank Underwood’s unscrupulousness yet again. Plus, the concluding chapter of The Hunger Games hits streaming services, along with a bunch of popular favorites. Read on for the full list.

A sublime blend of witty banter and inspired special effects, Ghostbusters remains one of the most beloved comedies of the 1980s. Ghostbusters 2… exists.

Jason Segel and Jesse Eisenberg star in this thinly fictionalized retelling of a few days in the life of David Foster Wallace on the verge of celebrity.

Ethan Hawke, Uma Thrurman, and Jude Law star in this noir-ish sci-fi thriller about a man who steals a friend’s genetic identity and runs afoul with the authorities.

In his first outing as 007, Pierce Brosnan helped to restore the layer of suave menace and playful humor that many viewers felt the character had been missing for far too long.

Frank Underwood (Kevin Spacey) is back to manipulate, glad-hand, rant, negotiate, and turn American politics into a nest of Machiavellian maneuvering — in other words, just another day in Washington.

Simon Pegg and Lake Bell star in this Certified Fresh romantic comedy about two mismatched people who end up on a date together after a case of mistaken identity.

Sorta like E.T but with a thicker brogue, this family film tells the story of Angus (Alex Atel), who stumbles upon a mysterious egg that contains a creature that grows up to be the Loch Ness Monster; Emily Watson, Ben Chaplin, and David Morrissey also star.

In this satisfying — if occasionally overly grim — conclusion to the blockbuster franchise, Katniss (Jennifer Lawrence) leads a guerrilla army to eliminate the despotic President Snow (Donald Sutherland) — and discovers that some within the rebellion may have agendas of their own.

Ghostbusters makes its long-awaited return July 15, rebooted with a cast of hilarious new characters. Thirty years after the beloved original franchise took the world by storm, director Paul Feig brings his fresh take to the supernatural comedy, joined by some of the funniest actors working today – Melissa McCarthy, Kristen Wiig, Kate McKinnon, Leslie Jones, and Chris Hemsworth. This summer, they’re here to save the world! Watch the first trailer: