Why A Bug's Life Is an Underrated Pixar Classic

On its 20th anniversary, we look back at a frequently overlooked Pixar classic that helped cement the studio's reputation.

Ants typically don’t live long enough to turn 20, but A Bug’s Life has reached that two-decade mark. Pixar’s second movie came out in theaters way back in November of 1998, when it premiered on November 14 before opening in limited release on the 20th and expanding everywhere on November 25. Though a success at the time, A Bug’s Life is one of the more forgotten Pixar movies these days. Sure, it doesn’t get flack the way the much-maligned Cars franchise does, but it rarely places highly on any of those “Every Pixar Movie, Ranked” lists that populate the web. Pixar itself appears to have forgotten A Bug’s Life as well, in a way: It’s the only one of the studio’s first six films that hasn’t gotten a sequel (the seventh, if you count Toy Story 2). Not everything needs a sequel, but it’s perhaps telling that the studio hasn’t returned to the story of Flik and his friends.

That’s a shame in a lot of ways. Though A Bug’s Life doesn’t reach the soaring visual and emotional heights of later films like Wall-E, Inside Out, and Coco, it’s still a remarkable success — just on smaller terms, as is fitting for a movie about bugs. 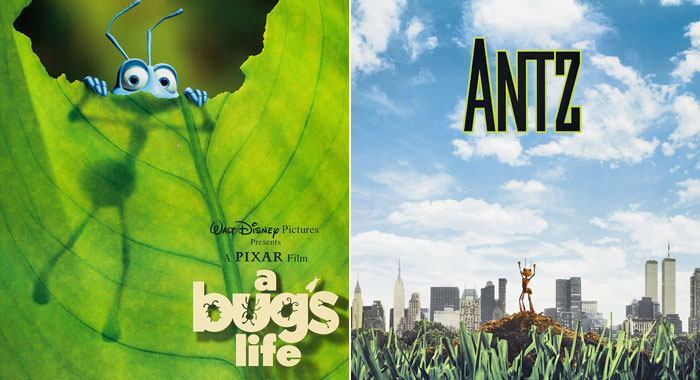 To fully appreciate A Bug’s Life, one must travel back to 1998, when moviegoers who wanted to see a computer-animated movie about an ant who was an individualist with big, unappreciated ideas had two choices as the box office. There was A Bug’s Life, and there was DreamWorks’ Antz, a bizarre parable about Marxism starring Woody Allen. That the movies were so similar was not a coincidence, at least not according to Pixar’s brass at the time, who claimed that DreamWorks’ Jeffrey Katzenberg, a former Disney chairman, stole the idea and rushed the movie to theaters before A Bug’s Life. Both were pretty well-received — Certified Fresh at 94%, Antz actually ranks a little higher on the Tomatometer than A Bug’s Life’s also Certified Fresh 92%, even if the audience score for the latter easily tops the former’s — and we can look back at the two movies now with bemusement. Still, consider how wild and telling it is that A Bug’s Life was a big enough deal from the start that it prompted some alleged corporate espionage. That’s the sign of an important movie, if there ever was one.

The Cast Is Full of Unexpected Greats 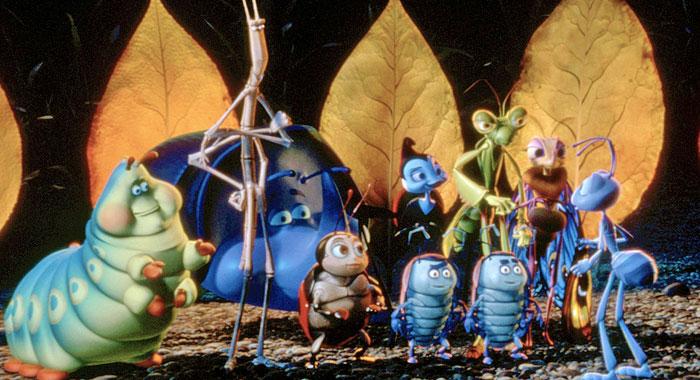 A Bug’s Life has a secretly stacked cast, full of actors who were definitely not cast because they were “popular with the youths,” but because they were talented. Phyllis Diller, whose iconic cackle was probably familiar to anybody who grew up with the pioneering female comedian in the ‘60s, makes a real character out of the Queen. Mel Brooks mainstay Madeline Kahn, who would die too soon a little more than a year after the film’s premiere, plays Gypsy, while Roddy McDowall, a character actor perhaps best known for his role as Caesar in Planet of the Apes, played a thespian ant. These are all great actors, but perhaps not the most obvious choices for an up-and-coming animation studio in the ‘90s. That they were cast in the movie is another early hint of Pixar’s willingness to do the unexpected.

Other members of the cast were perhaps a little less out of left field, but actors like Julia Louis-Dreyfus (Princess Atta), Denis Leary (Francis), David Hyde Piece (Slim), and Brad Garrett (Dim), and Richard Kind (Molt) are all inspired casting choices, not to mention Dave Foley in the lead as Flik. It’s nearly impossible to talk about Kevin Spacey with any sort of reverence these days, and for good reason, but as Hopper, he voices one of the more chilling villains that Disney — let alone Pixar — has ever dreamed up.

Its Plot was Epic, Yet Focused 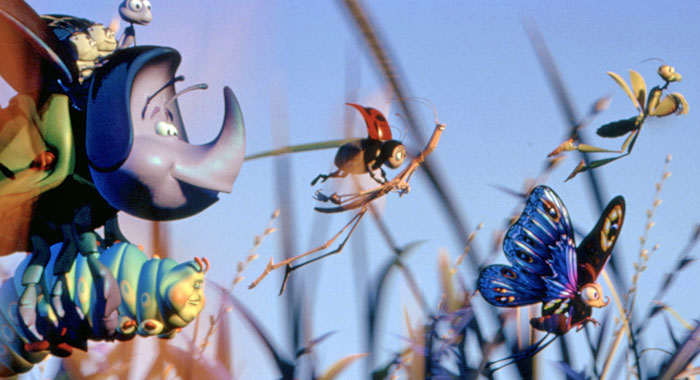 A Bug’s Life is, essentially, a kid-friendly rendition of Akira Kurosawa’s Seven Samurai. The grasshoppers, led by Hopper, have been oppressing the ants for too long, and when their greed and cruelty reaches new levels, the ants must fight back. Sure, the fight is less of a Lord of the Rings-style clash between giant armies and more of a Trojan Horse gambit in the form of a wooden bird, but A Bug’s Life has a pretty epic plot nonetheless. And yet, the storytelling economy is on point. In a filmmaker’s roundtable video that Disney/Pixar produced, the directors and producers recall how the script went through multiple iterations as they figured out what had to work in order to make the story flow.

The first big breakthrough came when they recast the lazy grasshopper from the Aesop’s Fable as a greedy tyrant. From there, it was all about making sure that every character had a personal stake in the fighting. Early drafts had a main character who was not from the colony, or circus performers who were initially scammers before deciding to switch sides, but those ideas wouldn’t have worked. By directly tying the conflict to each character in an emotionally resonant way, A Bug’s Life managed to have a large-scale war story with a highly focused scope. 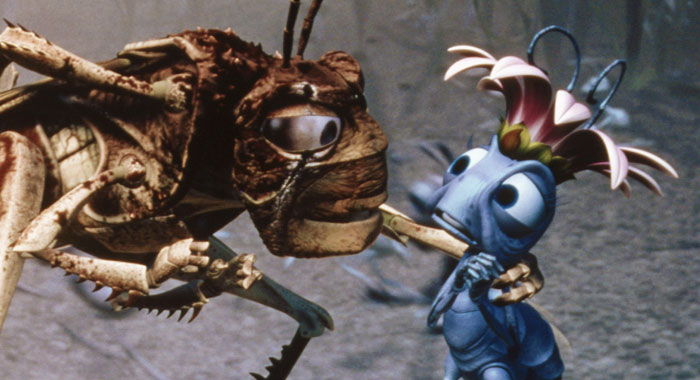 These days, Pixar is celebrated for its truly innovative premises. What if the emotions in your head were personified, here to teach you a lesson about how sadness is good? What if humanity ruined the Earth and left a cute, largely silent robot behind to clean up? What if art deco superheroes fought against the struggles of marriage, and also maybe loved Ayn Rand? A Bug’s Life is not like that. In fact, it’s probably the most traditional Pixar movie when compared to Disney’s classic animated canon. The film, like so many of the classic Disney movies, was based on an old tale from the public domain — in this instance, the Aesop’s Fable about the ant and the grasshopper.

Anybody who has watched The Little Mermaid and then gone and read the original Grimm’s Fairy Tale knows that Disney frequently makes major (and typically good) changes when adapting an old story. A Bug’s Life was no different, taking this fable of a lazy grasshopper and hardworking ant and spinning it into a new tale about individualism, make-believe actors becoming real-life heroes, and triumph over extortion. It was Pixar’s only real take on what had been Disney’s M.O. for decades, and while the studio’s creative ambitions would only grow greater, A Bug’s Life is worth remembering for being a singular Pixar reinterpretation.

It Proved That Pixar Wasn’t a Fluke 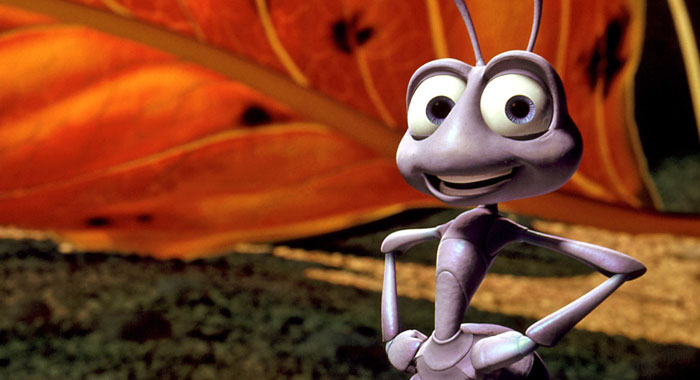 If the worst thing A Bug’s Life has going for it is that it isn’t one of the greatest animated movies ever made from arguably the greatest animation studio of all time, then that’s a pretty good sophomore slump. After the success of Toy Story, Pixar, which had since become a public company, needed to deliver a success to keep the momentum going.

“We felt the future of the studio was resting on it,” A Bug’s Life producer Darla K. Anderson recalled in that filmmaker’s roundtable. Had Pixar’s second movie been a total bust, Pixar might’ve been written-off as a one-hit wonder. Instead, A Bug’s Life was a critical and financial success — maybe not as good as Toy Story, but a sure sign that there were plenty more good things to come.

Twenty years later, now that computer graphics have progressed so much, it’s easy to overlook the visual and technical leaps that A Bug’s Life Made. Compared to Toy Story, A Bug’s Life is much more complex. Animators needed to create entirely organic-looking worlds on a much bigger scale than Toy Story’s mostly bedroom settings. There were significantly more characters in A Bug’s Life than in the earlier film — heck, the ant colony alone dwarfs Toy Story’’s entire cast. Pixar also had to use or develop new animation techniques to handle light flickering through semi-transparent grass and the flickering flames of the finale. In other words, A Bug’s Life was no small feat, and that warrants a bit of celebration.