What's It Like to Make a Movie During the Pandemic?

The people behind a blockbuster thriller, a viral horror hit, and a timely conversation starter – all shot and set during lockdown – let us know how they did it. 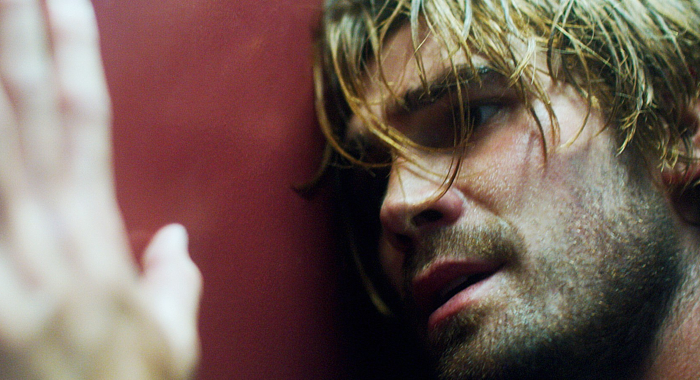 Moviemaking is incredibly… complicated. A million things can – and often do – go wrong, myriad questions and unforeseen problems pop up, and all the while issues like budgeting and scheduling consistently hover around, like annoying flies you just can’t swat away. But making a movie during lockdown? “It was intimidating and surreal, to be honest,” Adam Mason says of the prospect (at the time uncharted territory) of doing just that.

Back in early July, the co-writer-director’s romance-thriller, Songbird (out December 11 on demand), became the first studio feature film to shoot in Los Angeles since the industry was put on ice for the foreseeable future in March. “The entire city shut down in one day, and nobody was working,” Mason recalls, “and it was like, ‘How can we get back to work?’ More than anything to do with the story, that was a huge priority.”

When the lockdown went into effect, Mason had to essentially shelve his indie passion project, which was in pre-production, leaving him “very despondent,” as he puts it. The next morning, his writing partner Simon Boyes rang him, and the duo cooked up a found-footage, lockdown-set “monster movie akin to something like Cloverfield.” That idea was greenlit by producer Adam Goodman, and eventually Michael Bay signed on, and Songbird ballooned from an iPhone-shot indie to a slick, big-budget Hollywood production about lovers (KJ Apa and Sofia Carson) trapped in a near-future COVID-plagued L.A., with a cast that boasts Bradley Whitford, Demi Moore, Peter Stormare, and Craig Robinson. “It became something a lot bigger than I anticipated,” Mason concedes.

That bigness presented a big problem. “It’s the only project I’ve ever been involved in where I was thinking about something other than the narrative,” says Mason. “I was thinking about safety and how we could pull off this kind of monumental task.” To do that, the production, in conjunction with unions, laid down a set of guidelines: There would be constant testing. “I was tested three times a week,” says Mason, “and if anyone came into my bubble – the amount of people I’d see day to day was tiny – I would know that that person had been tested negative that morning.”

There would be a “zone system,” in which anyone on set was designated to a particular area, to limit interactions with non-masked actors when cameras rolled. The crew would be capped at 40 people. And personal protective equipment (PPE) and quarantining measures would be in place. “We had a rule very early on that we wouldn’t hire an actor that was out of town,” says Mason. “And then everyone quarantined whenever they left set, so I would know that everyone I was working with hadn’t mingled with anyone outside of their families.” (As Deadline reported in July, the SAG-AFTRA union hit Songbird with a Do Not Work order, only to rescind it the following day once an agreement was made.)

It helped that Songbird was a film about lockdown conceived during lockdown, written with a lot of those logistical hula hoops in mind – namely, not being able to have blocking (“It wasn’t like actors had to hit marks because we didn’t have the full crew to warrant that kind of traditional filmmaking,” Mason says) or “massive movie lights” or makeup retouches or time (it wrapped in 19 days) or anything else that would require inessential on-set interaction. And if there was a moment that called for a lot of actors, there was a workaround: “Because Songbird is set four years in the future during the pandemic,” Mason says of the more extra-heavy scenes, “all of the military were wearing hazmat suits and gas masks and things that actually were extremely safe in terms of being PPE.”

That same ethos – doing what you can with the limited lockdown means you have – has propelled indie films shot during the pandemic as well. Host, a grippingly fun horror film Certified Fresh at 100% (and currently streaming on Shudder) started as a lark. “[Host director] Rob Savage played a prank on us,” explains the film’s star, Haley Bishop. “He told us that there was this noise in his attic when we were all on Zoom, and then he somehow seamlessly made it seem like he had gone up into his attic and then cut to the zombie shot from the horror film [•REC]. He put the video up of us screaming online, and it got millions of views within a couple of days.”

Viral exposure led to a deal with Shudder, and Host, about a séance over Zoom gone wrong, began shooting a mere two weeks later, in April. “When we started, the U.K. was in full lockdown,” Bishop says. “Rob never set foot in any of our apartments.” Host had a scriptment – “the little points we had to hit” – but the dialogue was completely improvised, so Savage and producer Douglas Cox, on blacked-out screens over Zoom, would instant-message actors notes in real time.

“Rob would write, ‘Okay, call Jemma [Moore] a bitch’ or ‘Keep poking at her until she cracks,’ and he’d be sending other private messages to her,” Bishop says, noting that all footage from the film was shot from iPhones attached to the actors’ laptops. “That was the beauty of it: We didn’t have to reset lights or wait for any departments to fix anything. We could just start again immediately. The most challenging aspect, though, was because we had to do so much intense crying and screaming and because we weren’t being ushered back to a trailer between takes, I was like, ‘I can’t cry anymore. I’m so dehydrated.’”

When COVID restrictions in London loosened, a small stunt team donning PPE visited the necessary actors’ homes – with medics on standby outside – to rig them with the pulleys and ropes and crash mats and whatnot needed to achieve Host’s scares. “Luckily, my partner was physically strong enough to drag me down a hallway, so he was very involved with helping,” Bishop says of one particularly jump-worthy moment.

A Playwright Pivots, Turning to Zoom to Bring Nora Highland to the Screen

Even fewer frills – no chilling VFX or stunts or medics – are present in Nora Highland, writer-director Ryan Spahn’s comedic, Zoom-shot drama that screened in October (virtually, of course) as part of this year’s NewFest, an LGBTQIA+ focused film festival in New York. Spahn originally wrote Nora Highland as a play, but after hosting a reading of it for an online benefit in the early days of the pandemic – the reading featured Tessa Thompson in the role Marin Ireland plays in the film – he decided to adapt it into a shutdown-set feature. “I realized, ‘Oh this really works on this platform,’” he says. “So then I adjusted it to the format of it being a found-footage or video conferencing film, like Searching or Unfriended.”

The centerpiece of Nora Highland is a lengthy Zoom chat, in which a theater director (Ireland) and actor (Michael Hsu Rosen) spat over the casting of gay characters – the thorny ethical issue of casting straight actors in the roles – while discussing an upcoming Broadway revival. “They’re big New York stage actors, so we rehearsed it for two weeks and then they got off book, as if we were doing a play,” Spahn says of the process. “One was in Upstate, and the other was in Chelsea. But because it was designed for [Zoom], the way you’d rehearse it is exactly the way it was filmed. So we did it in one take, and I hoped there wasn’t an internet or cell-phone problem.”

Despite some initial editing quibbles – “we couldn’t sit next to each other, so the editor had to screen-share his desktop, and there were weird delays and volume issues,” he explains – Spahn found filmmaking during the pandemic “very freeing.”

Although Songbird has polar-opposite stakes and circumstances, Mason shares that sentiment: “Because there weren’t loads of people around, weighing in with opinions and thoughts and so on, there was this incredible sense of freedom that I haven’t felt for years. I think it kind of stripped away all of the bulls–t of filmmaking.”

Songbird is available on video on demand from December 11. Host is available now on Shudder. Nora Highland is currently screening at online festivals.