The Disney+ series also expands the world of Andowyne to a new audience, explain the cast and executive producers Jon Kasdan and Michelle Rejwan, with new characters and new magical rules.

It may seem an odd point, but Andowyne — the world of Willow — is round.

“It’s absolutely round, without any question … and it’s a big expansive planet,” executive producer Jon Kasdan explained when Rotten Tomatoes recently caught up with him and members of the cast of the new Willow Disney+ series. And though it might seem an obvious point that the world Willow Ufgood (Warwick Davis) inhabits is round, that is not a given as Kasdan and his collaborators had a lot of world-building opportunities. Nevertheless, Andowyne behaves like an Earth-like planet with “two moons … at least that we can see.”

“There may be more than one sun,’ Kasdan continued, ‘but it certainly exists in a universe where planets and astrological objects are spherical.”

Confirming the nature of Andowyne was just one of the pleasures for Kasdan when he took up the opportunity to return to Willow’s story some 35 years after the Willow feature film (trailer above). A quick recap of that story: Willow is a Nelwyn who dreams of becoming a great sorcerer. But his plans get interrupted when his daughter finds a human child in the river near their home. As it turns out, the child is Elora Dannan, fated to end the reign of Queen Bavmorda (Jean Marsh) in Nockmaar. But as the baby cannot stay in the Nelwyn village, Willow sets out on an adventure to find her a home. Along the way, he makes friends of wily swordsman Madmartigan (Val Kilmer) and Bavmorda’s eventually rebellious daughter Sorsha (Joanne Whalley). In the end, all four are pivotal in Bavmorda’s downfall.

But as this was a film produced by Star Wars creator George Lucas and directed by Ron Howard, there was always the possibility of another adventure. “The two people who have really wanted this all along are George and Ron,” Kasdan explained when we were invited to a screening of a Willow episode early in November. “To hear Ron tell it, George had always sort of imagined the TV space as a place where Willow could continue … [but] the expectation coming off of the movie was that it was going to launch a new cinema franchise.” 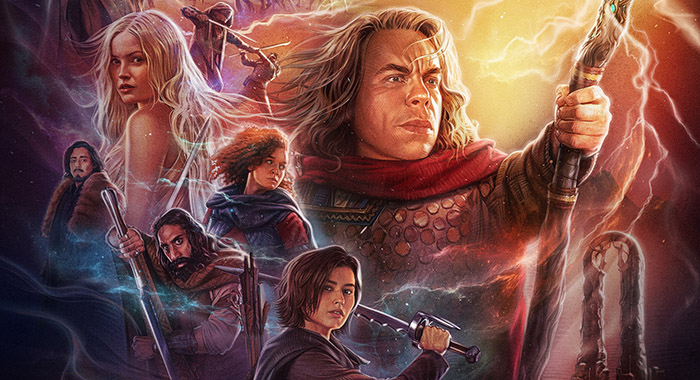 The film series never materialized. But a handful of novels, role-playing supplements, and a source book offered those hungry for more of Andowyne something. Flash forward a few decades: The Lucasfilm library becomes a part of Disney, and Kasdan is working alongside his father, writer Lawrence Kasdan, and Howard on Solo: A Star Wars Story. A Willow project of some sort was in the younger Kasdan’s mind already, but as he recalled, “It wasn’t until the moment that Disney+ was announced and The Mandalorian was in process, [Ron] came in that morning very excited and said, ‘This is how we could potentially convince Disney to let us do more Willow.’ And he was absolutely right. He stuck to it.”

Lucas, meanwhile, gave his blessing to Kasdan during a Solo set visit, but the elder creative force “has decided on a philosophical level that he couldn’t have one foot in the door and one foot out of the door,” leaving Kasdan and his team responsible for building out the world glimpsed in the film; hence, deciding with certainty — and for possible story reasons — that Andowyne is a round world. 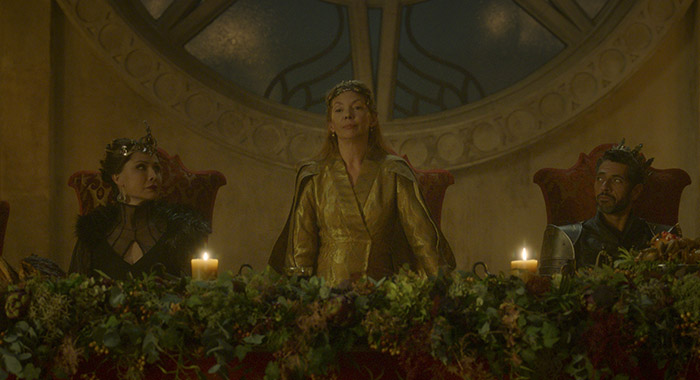 But what is a world without a tale and characters? From the trailers Disney released across 2022, some things are clear about the new adventure and those going on it. Twenty-or-so years have passed since Bavmorda’s defeat. Sorsha rules as queen regent, while her children, Kit (Ruby Cruz) and Airk (Dempsy Bryk), train for their presumptive roles. All the while, the eventual return of Elora Dannan looms over everything. But when a new magical threat emerges and Airk is kidnapped, Kit, her constant companion Jade (Erin Kellyman), kitchen maid Dove (Ellie Bamber), and a few others set out to find Willow and Elora in the hopes that they can make quick work of the emerging evil.

Of course, that summary may give the impression the series is more hard-nosed and serious than its film predecessor. Instead, it features a youthful irreverence Kasdan said was baked into much of Lucas’s output from Star Wars 1977 debut to the early ’90s.

“He just so distilled the fun of movies into these stories. He knew the right pitch between serious and funny and joyful and loose,” Kasdan explained. “It was so specific, and we just wanted to honor that tone.” 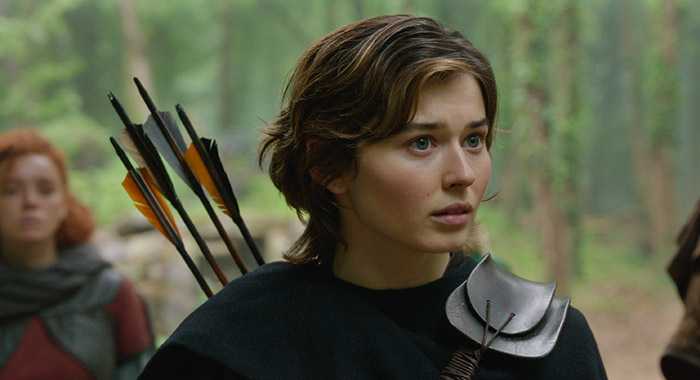 In the film, some of that irreverence centered on Kilmer’s performance as Madmartigan. Sadly, the actor could not be involved in the series due to the pandemic, but the character’s spirit lives on with his and Sorcha’s children.

“To be children of such iconic characters was just crazy and super awesome,” Cruz said of picking up on both Kilmer and Whalley’s legacy. “And we have footage and reference of our parents!”

“She was raised by two legends,” Cruz continued. “She was told the story of Willow growing up. I think she definitely puts a lot of pressure on herself to be something great and that sort of comes with its own complications.” 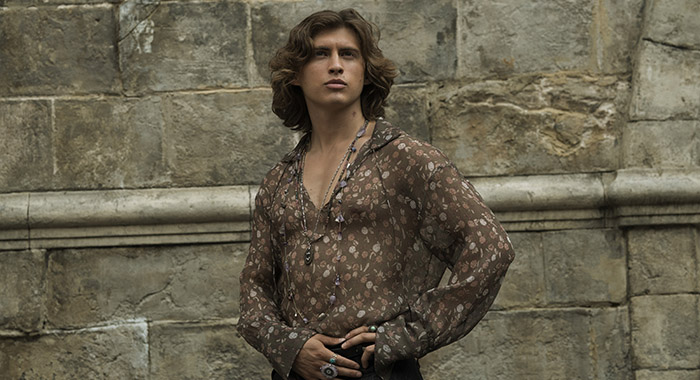 Airk, meanwhile, is first seen to be “lackadaisical and flaky,” according to Bryk – a trait that will offer a certain echo to Madmartigan. But viewers will also see him on the cusp of a great change. “It’s really a coming-of-age story for all these different characters,” he explained.

“He’s at that precipice moment where it’s like, ‘OK, it could go one of two ways,'” the actor continued. “I feel like everybody in this story is at this point where they’re about to take a risk or not.” 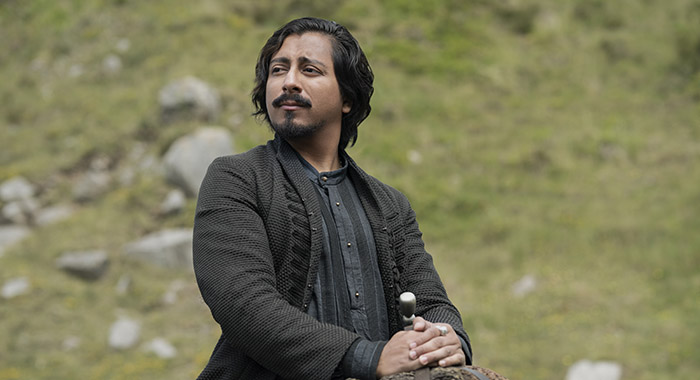 Risk is an especially large issue for one member of the party: Tony Revolori’s Graydon. Tasked with a function contrary to his true passions, he often declares his anxieties in a very unusual way for modern fantasy television.

“[But] more than anything, he’s so afraid of disappointing people that he’ll still go and do it,” Revolori explained. “He has this almost internal bravery where he’s comfortable saying, ‘I don’t want to do this,’ and then still going for it. And I think that’s the true kind of nature of a lot of people.” 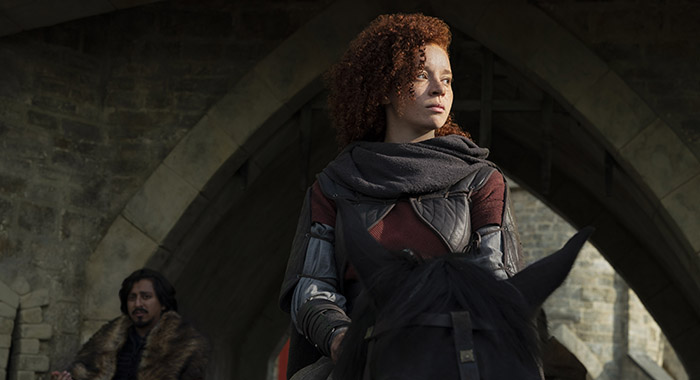 Circumstances bring Graydon into the group and in between the shifting dynamic of Kit and Jade. Friends since an early age, the pair may be seeing things differently now that they are young adults. But Jade’s plans for herself and Kit’s presumptive responsibilities see them re-evaluating everything as the quest begins.

“Our characters are all so different from each other and they stand so strong in that too,” Kellyman said. “And I’ve really enjoyed getting to know and bring Jade to life.” 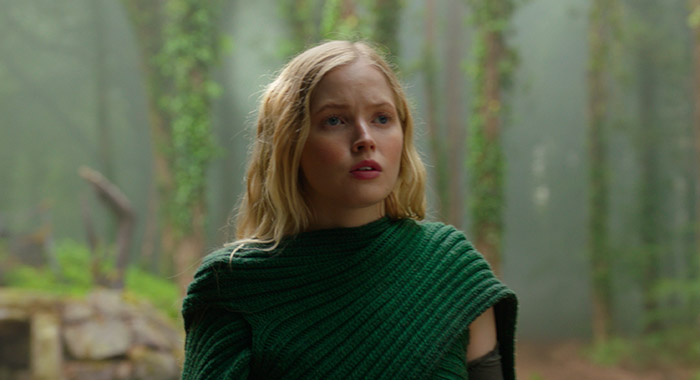 But even as Kit and Jade seem to increasingly diverge, there is one thing they can still agree on: Dove is an unwelcome presence in their party. Bamber, playing the part, has a different perspective.

“She’s incredibly brave and she has this ability to just not care about what anyone thinks about her and continue forward no matter what,” she said. “The fact that she develops and discovers herself at such a rapid rate and changes almost on an episodic basis. I just loved that about her.”

Another member of the group is Boorman (Amar Chadha-Patel). Described by the actor as “a rogue with the heart of gold and the sword swinging ability,” the character’s archetype quickly gets examined and deconstructed. The initial bravado and scene-stealing observations eventually give way to someone “a bit more fragile.”

“[Boorman] has his own path to tread that isn’t often given to male characters,” Chadha-Patel teased.

Executive producer Michelle Rejwan added, “I really do think [that Lucas tone] is inherent in Jon’s writing and the great characters he created. It was on the page from day one. And I think that’s why we all instantly fell totally in love with this and couldn’t wait to see it.”

But what of Willow in all of this? The title character is definitely back for the adventure, but perhaps in ways some may not expect. Then again, this older Willow may be exactly who you expect to see.

“It is wisdom without pomposity,” Davis said of the character; although the actor always questions just exactly how wise Willow really is. “I see him as somebody who’s trying to manage to get through life kind of pretending a little bit,” he explained. 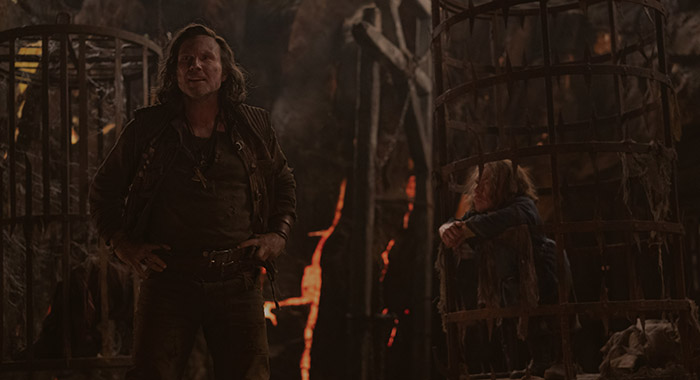 Considering how often he used sleight-of-hand to get out of scrapes in his younger days, visiting with a Willow who is still not a “great” sorcerer makes a lot of thematic sense.

“It would be very easy to come into this series [and say], ‘Oh, what’s he been up to for the past 20 years? Oh, look. He’s a proper sorcerer now. Look, he can do anything he wants. He can levitate. He can transport. He can do all this stuff,'” Davis continued. “And instead, he’s still on that path to becoming a sorcerer. We still talk about what happened in Bavmorda’s demise at the end of the movie, and the fact that he’s a bit of a fraud in that regard.” 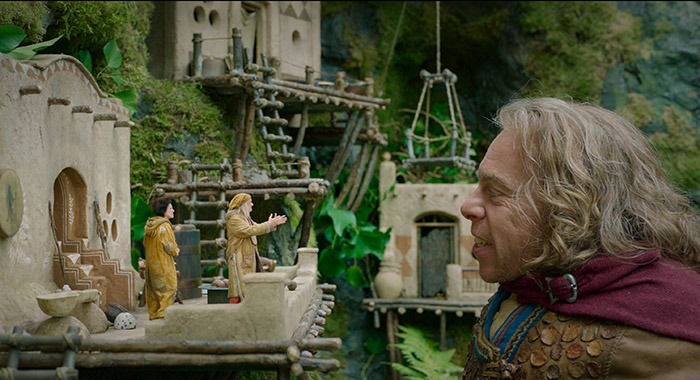 Nevertheless, he is still uniquely suited to guide the new generation of adventures. For one thing, he at least has some idea of where to go.

“This is an interesting angle to take,” he said. “Willow knows the basics. He knows enough to start to impart knowledge. He can read the textbooks and show the student, ‘OK, look at that paragraph. That’s kind of what you do.'”

And, as audiences will see, the magic in Willow is better defined thanks to the expanse of a television series.

“We do investigate in more details, particularly the kind of effect it has on the person who casts the magic,” Davis explained. “In the film, you see Willow performing sorcery when he’s being taught by Fin Raziel [Patricia Hayes] and the effect it has on him afterwards. In other words, it leads to pain. But we never really understand in the film what’s going on there.” 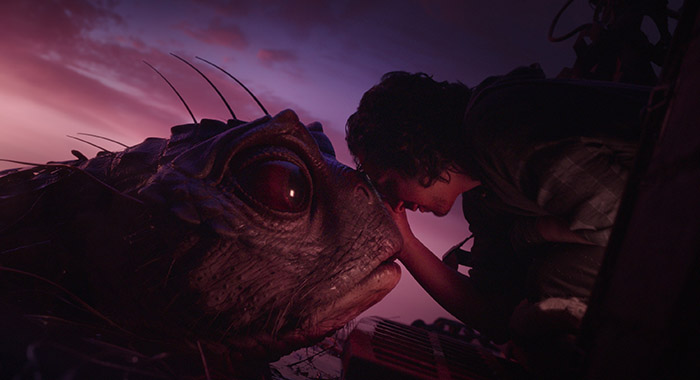 To find that understanding, Kasdan made another set of world-building choices to play out across the series.

“Some of those rules you really want to have some fun with,” he said. “One thing that we talked about was that, for example, spells require some mutterings of words. But where [sorcerers] quickly advance to, even in their training, is a place where it seems almost silent, and they’re sort of speaking them under their breath.”

So, a seemingly hard magic system comes to Andowyne, but Kasdan was quick to mention that some softening may also occur as a big theme of magic within the Willow series concerns the notion that “the intention of the spells is more important than the language of them.”