Today’s Ketchup brings you ten headlines from the world of film development news, covering titles such as Garfield, High Noon, and Rebecca, and a movie for… Frankenberry? 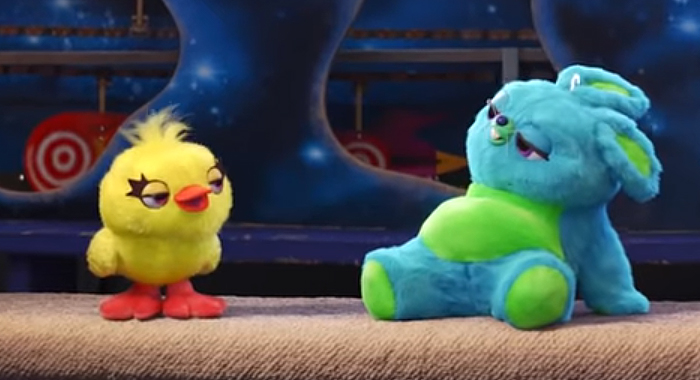 We might still be waiting for our first glimpse at next summer’s remake of The Lion King (7/19/19), but this week, Disney dropped two teaser trailers for their other major big computer animated film. It started on Monday when a teaser appeared online for Toy Story 4 (6/21/19) showing the beloved characters holding hands/paws/etc to Joni Mitchell’s “Both Sides Now.” It then goes horribly wrong when we are introduced to a new character voiced by Tony Hale (of HBO’s Veep). (Mr. Potato Head appears in that teaser but we don’t yet know who is voicing the character following the 2017 death of Don Rickles.) The next day, Disney/Pixar put out a “reaction video” featuring characters voiced by Keegan-Michael Key and Jordan Peele. In somewhat related news, a new poster for the Child’s Play remake (starring Aubrey Plaza as the mom) revealed a release date of June 21, 2019, which means Chucky the killer toy is directly taking on Pixar’s own toys (and also the Grudge remake).

Tom Hanks and director Robert Zemeckis teamed up in 1994 for Forrest Gump (73% on the Tomatometer), which went on to win six Academy Awards (including Best Picture, Best Actor, and Best Director), and then reunited for 2000’s Cast Away (Certified Fresh at 90%) and 2004’s The Polar Express (56%). One of Zemeckis’ first hits was the time travel adventure Back to the Future, and Tom Hanks co-starred in 2012’s Cloud Atlas, a partially post-apocalyptic story set on the big island of Hawaii. Hanks and Zemeckis are preparing to reunite yet again next year on a science fiction film called Bios that is also set in a post-apocalyptic future. Hanks will play “Finch, the last man on earth, who decides he must plan for the worst by building a robot that could care for his dog in the event of his death.” Robert Zemeckis’ next film will be next month’s Welcome to Marwen, retelling the true story from the 2010 documentary Marwencol.

In 1940, director Alfred Hitchcock was already 41 and had directed nearly 30 feature films. However, he had yet to direct his first Hollywood film, setting off on the more famous second half of his career (Vertigo, Psycho, North by Northwest, etc.). That first Hollywood film was Rebecca (Certified Fresh at 100%), adapted from a best-selling 1938 novel by Dame Daphne du Maurier and starring Joan Fontaine and Laurence Olivier. Now, Netflix is setting out to produce a new adaptation of Rebecca in collaboration with director Ben Wheatley (High-Rise, Free Fire), another British director in his 40s making his Hollywood debut, albeit via the UK’s Working Title. Lily James (Baby Driver, Downton Abbey) will star as the title character, with Armie Hammer playing her wealthy new husband. The new Rebecca was adapted by screenwriter Jane Goldman (The Woman in Black) (and Matthew Vaughn‘s frequent co-writer on movies like Kick-Ass and Kingsman: The Secret Service).

3. AMAZON AND APPLE SIGN BIG DEALS TO TAKE ON NETFLIX

As things sit right now, Netflix is the obvious streaming “king of the hill” by a landslide, but 2019 looks to be a big year for the contenders directly competing with them. That will include the new Disney+ app, which will feature various new series and movies from Disney, Marvel, and Lucasfilm, while AT&T/WarnerMedia are also launching a new service next year. Companies already in the game are also stepping up their plans, with two of them making big new deals this week. Amazon has cut a deal with Blumhouse Television to produce “eight feature-length thrillers” with the reported goal of finding their own “elevated thrillers” in the style of Blumhouse’s 2017 hit Get Out. Apple’s big deal this week is with A24, the indie studio that has been scoring a series of mid-range box office hits and Academy Award nominations and wins (Moonlight, Lady Bird, The Disaster Artist, Hereditary). In somewhat related news, J.J. Abrams’ Bad Robot production company revealed six new projects this week following the release last week of Overlord, as Bad Robot is seeking a new studio home (which could ostensibly be one of these streaming services).

Six years ago, 25-year-old Chancelor Bennett (AKA Chance the Rapper) released his first “mixtape,” 10 Day, just a year out of high school, which led the next year to his breakout with Acid Rap and a successful collaboration with Childish Gambino (Donald Glover). Since then, Chance has also won the first ever Grammy Award for a streaming-only album (2016’s Coloring Book), and he recently starred in A24’s Slice. Now, he’s developing a movie musical at MGM called Hope, which will “follow a group of Chicago teenagers who band together to turn art into action within their community.” Hope will be adapted by screenwriter Carlito Rodriguez, who has written for and produced the hit TV series Empire (which also films in Chicago). It’s not yet known if Chance will also star in Hope.

Just last week, we learned that production is starting up on a Breaking Bad movie about the continuing misadventures of Aaron Paul’s Jesse Pinkman character. Whatever else it might have been, Breaking Bad was most obviously a show about meth production and the illegal drug trade. Warner Bros. is now moving forward with another drama about meth dealers, namely an adaptation of the novel Barbed Wire Heart by author Tess Sharpe. Although she is not expected to star in the film, Margot Robbie’s Luckychap production company is developing Barbed Wire Heart along with Dan Lin, whose work at Warner Bros. has included the The LEGO Movie and Sherlock Holmes franchises. The Barbed Wire Heart lead character is the “daughter of a meth-dealing killer… who squares off against the rival family who took her mother’s life.” In related news, Margot Robbie’s next film as Harley Quinn, Birds of Prey, has found its Cassandra Cain in newcomer Ella Jay Basco. In the DC Comics, Cassandra Cain is one of the crimefighting heroines who has in the past worn the costume, cape, and mask of Batgirl. Birds of Prey is scheduled for release on February 7, 2020 (up against Peter Rabbit 2, and the week before James Bond 25).

4. IS THE WORLD READY FOR FRANKEN BERRY AND THE MCU (MONSTER CEREAL UNIVERSE)?

There is something of a strange overlap between “monster movies” and “kids’ movies,” which dates back to the Abbott and Costello crossovers of the 1940s and 1950s and more recently includes the three Hotel Transylvania movies. Starting in 1971, General Mills has produced a line of breakfast cereals that spoof the Universal Classic Monsters. The three most popular are Franken Berry, Count Chocula, and Boo Berry (past cereals Fruit Brute and Fruity Yummy Mummy are currently discontinued). This week, a new Franken Berry billboard went up on Sunset Blvd. prompting people to go to this website. That’s where this story gets really weird. It appears that General Mills is actively looking for “filmmakers, actors, agents, writers, producers, animators, tastemakers, dealmakers, movers and shakers” to help them pitch concepts for movies (or other projects) based on their breakfast cereal monsters. Honestly, we’ve seen way worse ideas for movies than, say, a Boo Berry haunted house movie, but we’ve also seen way better ones.

There are “classic movies,” and then there are classic movies, those films considered to be amongst the form’s highest entries. 1952’s High Noon (Certified Fresh at 96%) is frequently included on “all time best” lists, in addition to the four Academy Awards it won (including Best Actor). In 2000, the TNT and TBS cable channels produced a remake of High Noon (Rotten at 50%) with Tom Skerritt (Top Gun, TV’s Picket Fences) in the small-town marshal role originally played by Gary Cooper. High Noon director Stanley Kramer died a year later in 2001, and now his widow has agreed to a deal starting development on a new remake. High Noon depicted how a U.S. Marshal in the New Mexico territory prepared for the arrival on a train at noon of a team of trained killers sent to carry out revenge for the arrest of their gang leader.

2. THAT ANIMATED LASAGNA ISN’T GOING TO EAT ITSELF: GARFIELD IS COMING BACK

In 2004 and 2006, Bill Murray starred as the voice of the world’s most famous comic strip cat in Garfield: The Movie (Rotten at 15%) and Garfield: A Tale of Two Kitties (11%). From one perspective, those low Tomatometer scores could mean there’s “nowhere to go but up,” but as with video game movies, it’s probably more likely to mean that any future Garfield projects probably won’t be well received either. The Garfield movies also weren’t particularly successful financially, with the first film only earning $75 million domestically from a budget of $50 million, and the sequel barely making more than a third of that. Regardless, development is underway on a new animated adaptation of Jim Davis’ popular Garfield comic strip character. The challenging prospect of turning the Garfield ship around is being taken on by director Mark Dindal who is best known for Disney’s The Emperor’s New Groove (Certified Fresh at 85%) and Chicken Little (Rotten at 37%).

In 1961, Stan Lee was 39 years old and frustrated with the state of monster and teen romance comics that his company was producing when he was inspired to co-create Fantastic Four, putting a new spin on superhero comics. Over the next five years, Lee, Jack Kirby, Steve Ditko, and others at Marvel Comics also gave the world Ant-Man, The Avengers, Black Panther, Daredevil, Doctor Strange, The Incredible Hulk, Iron Man, Nick Fury, Thor, X-Men, and arguably their biggest success, Spider-Man. Starting with 2000’s X-Men, Lee started a long string of movie cameos that really took off when Marvel Studios started producing their own movies in 2008 with Iron Man. This week, Stan Lee died at the age of 95, leaving behind a legacy and body of work rivaled by few in modern pop culture. Stan Lee’s cameos made him technically the highest grossing actor of all time (Samuel L. Jackson isn’t far behind), but we now only have a few more films that we’ll ever get to see Stan in again. As for the future beyond Stan Lee’s last cameo, the MCU will obviously continue, but Stan himself also talked last year  about the possibility of a Stan Lee movie (possibly starring Leonardo DiCaprio?). Lee is an entertainment legend and a pop culture icon, and he will be sorely missed.