Titans is very much the DC Entertainment television wunderkind. It startled audiences with its first line of dialogue – a coarsely phrased admonishment of the Batman. But for those who accepted its rebel spirit, it assembled a Titans team of misfits and emotionally damaged people. There were no easy answers across the first two seasons, of course, and additional traumas pitted people against one another. And no one seemed more damaged by those events than Jason Todd (Curran Walters).

In fact, Jason’s trauma is very much at the center of Titans third season, which launched on Thursday on HBO Max. The first three episodes reframe the series as Gotham-centric and take several cues from some of the most famous Jason Todd stories. But considering what the trailers have teased about the new season, fans may be surprised to see Jason back at Wayne Manor as the first episode begins. 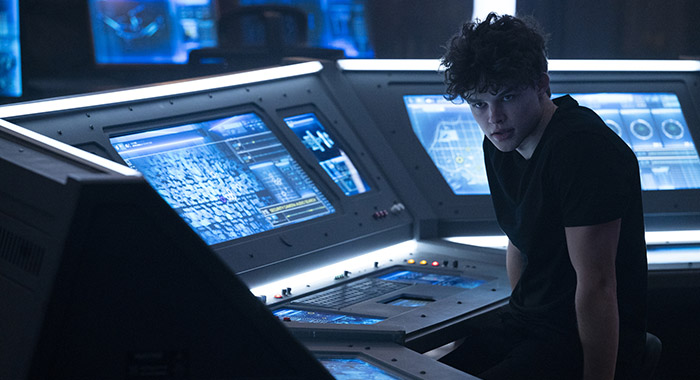 “I had mixed feelings when I first got the script,” Walters said when Rotten Tomatoes caught up with the actor. “But ultimately, I feel like he had no other option. I think he was hoping for a reunion and for things to be fixed. Obviously, that’s where you go, family.”

Showrunner Greg Walker told us it was the natural progression from Jason’s split with the team at the end of season 2.

“It made sense to me emotionally,” he said. “The persona of Robin, in that supersuit in that role, is really the thing that saves Jason — and always has — and has kept them off the streets. He’s had a very rough life, and he’s somebody who struggled, so it means a lot to him to be Robin.”

Indeed, in at least in some comic book stories, Batman chose to take Jason in for fear that the kid who tried to steal the hubcaps off the Batmobile would grow to be a foe.

“[Jason] cares a lot about it, and he’s good at it, so it made sense to go back to Bruce,” Walker continued. “It’s one thing to go home, but it’s another thing to actually deal with your troubles and your problems.” 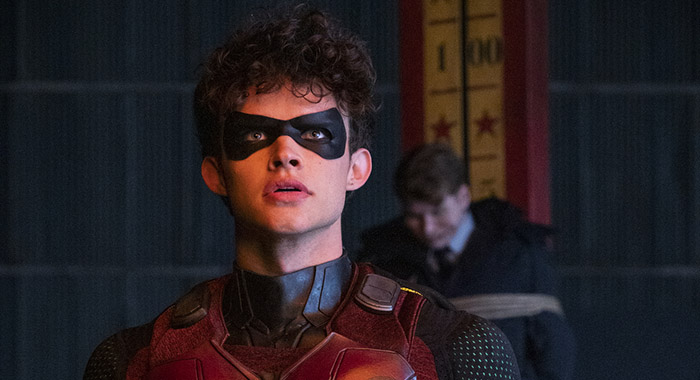 Created in 1983 as a permanent replacement for Dick Grayson, who assumed the identity of Nightwing around the same time, Jason was initially well-received. In the reboot aftermath of Crisis on Infinite Earths, though, a bratty streak developed in the character which upset fans of Batman and Detective Comics. Famously, readers voted to end Jason’s life via a 1-800 number in 1988; although some accounts suggest Jason would’ve died no matter the results of the phone poll. Nearly 20 years later, he was revived via absurd comic book means and came to represent a compelling concept: the person Batman failed the most during his crusade against crime. It is an idea Titans intends to play with.

Of course, Jason sees it in a different way as Walters told us “Jason feels like he was ultimately a mistake to Bruce.”

We’d argue the character’s perception is yet another of the Batman’s mistakes. 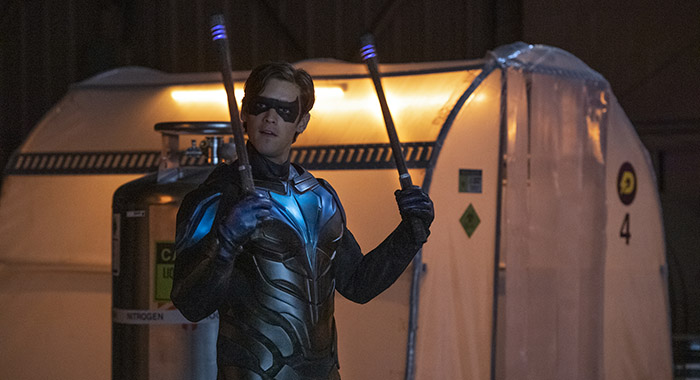 According to Walker, taking a harder look at Bruce’s (Iain Glen) choices and mistakes is a key element of the show, going back to Dick’s (Brenton Thwaites, pictured) infamous “F— Batman” moment.

“It’s one of the reasons that we see Dick struggling in the pilot, he’s a guy who can’t quite figure out how to deal with this pain and struggle that he has based on the trauma that started off his life with Bruce,” Walker said.

And though that initial trauma was not Batman’s fault, he certainly didn’t help Dick cope with it. So is “failure” a fair appraisal of Bruce’s parenting skills?

“Not necessarily,” said Walters, who indicated Jason’s traumas before meeting Batman are still present and only compound the issues we will see in season 3. “I think [Bruce] parents the way that he knows to parent, which is based on his dealing with trauma. But his way of dealing with trauma is not right for everyone. So therein lays the challenge of his parenting: to see if he can grow and see where his pitfalls and failures are, and understand people in a different light other than through his own prism.”

And Jason’s key decision in season 3 will definitely speak to that. Fans of Batman comics know what comes next for the character, but we’ll leave it as a surprise for new viewers.

Of those upcoming events, though, Walters said “I think that whole story arc was inevitable. It was something you had to do. So, I’m really glad we got to explore that this season. I think his destiny is unavoidable.” 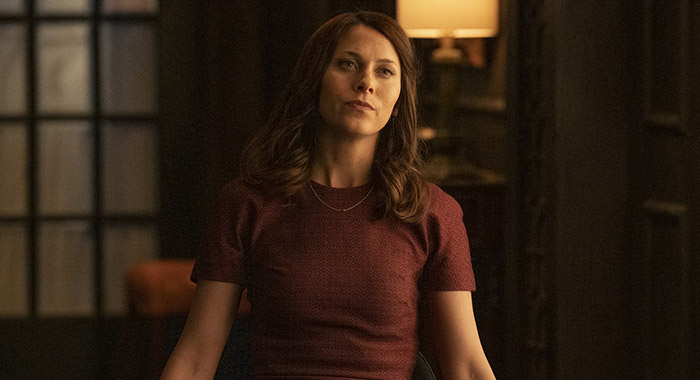 But Titans is a large ensemble show, and Jason’s story is also an anchor for the rest of the team as they move from San Francisco to Gotham and encounter people like Commissioner Barbara Gordon (Savannah Welch, pictured) – a version inspired by her comic book counterpart’s years as a paraplegic (from 1988 until the universe-wide reboot in 2011) and her role in the Batman Beyond animated series.

He also added that as the show will always pivot around Dick’s choices, Barbara adds a new perspective on him – only Donna Troy (Conor Leslie) knows him better – and that it will lead to an interesting dynamic in its own right. 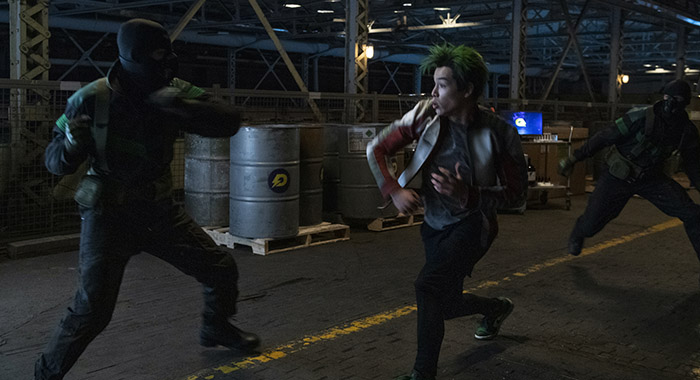 The move to Gotham will also put Gar Logan (Ryan Potter) in an interesting position for growth.

“This teen has been through a lot in two seasons, he’s seen a lot, and grown from a guy who was hanging out at a mansion with the Doom Patrol [and had] a sheltered experience,” Walker said. “He’s seen people die, he’s seen trouble. He’s seen a family that he deeply cares about get challenged and tested. So I think it’s a natural outgrowth of where you go as a person or you deal with it like a lot of us deal with trauma — by not dealing with it. But he has stepped up as someone who now will fight for what he cares for.” It is a change in his persona which pleasantly sneaks up on the viewer across the first few episodes. 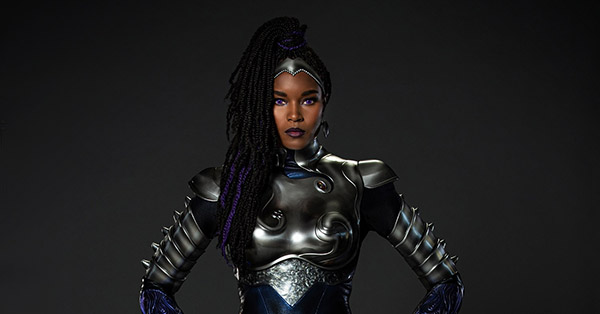 It is also a good thing he’s stepping up as the most leader-like member of the team, Kory (Anna Diop, pictured below) will also preoccupied by a family matter: her sister Komand’r (Damaris Lewis, pictured above) – aka Blackfire – has arrived on Earth.

According to Walker, introducing Blackfire serves multiple purposes beyond showcasing Lewis’s talents. The character also offers the show a chance to get into the situation on Kory’s homeworld while remaining on budget-friendly Earth.

“[She] brings back that experience from another planet, which sheds light into Kory’s origin; it was super important for us to tell that story,” he said. 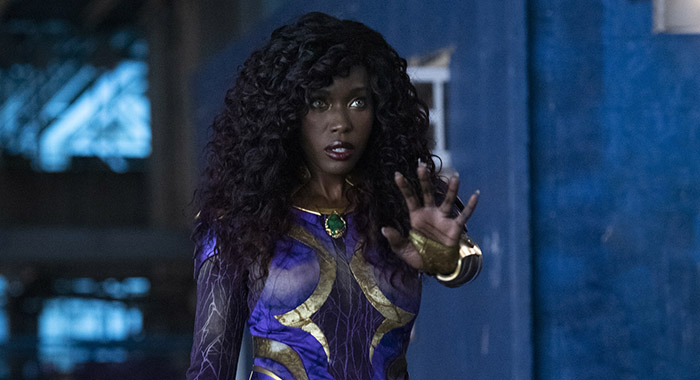 In a departure from most of Kory’s comic book adventures, the Titans version arrived on the scene with amnesia and never fully recovered.

“She has to figure out over the course of [these] three seasons what she is, why she was sent on this mission, and what really matters to her,” he explained. But even beyond Kory’s personal journey, Blackfire’s appearance serves another of the show’s themes. “So much about this season, especially after the pandemic and after the way the world was changing, we wanted to address power structures, and the myths behind them, and poke at them.”

It is part of the reason Batman continues to get a critical thrashing within the show and why the GCPD may not be entirely clean even under Barbara’s direction.

“If we’re going to do that to the GCPD and the role of superheroes in Gotham, it had to also be done to the power structure on her home planet [Tamaran],” Walker continued. “How is [Blackfire] in a position of power and how is her sister not? What stories do people tell in order to ensure that they can keep that power? 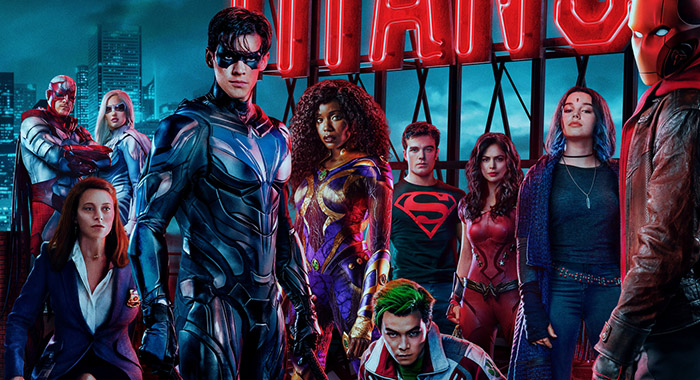 As a whole, Titans seems to revel in shattering more innocent, Silver Age conceptions of the Teen Titans with a deeper psychological grounding. Walker credited The New Teen Titans by Marv Wolfman and George Perez, with its own well-rounded depictions of characters like Dick and Donna, as the inspiration for Titans’s tendency to delve further into the group’s psychology.

“What I found so striking about reading those books is that the characters are asking hard questions … They weren’t built to sit down and navel gaze, but there was an edge and a probing quality to the writing that we ran with,” he said.

But does it all that probing into the characters mean Jason is doomed? “He does something that is very hard to come back from,” Walters said. “So ultimately, it’s a fight within himself [and] whether the Titans can forgive him or not for what he has done.” Time will tell, of course, if Jason will be able to redeem himself or if another will take flight as Robin.