The Mandalorian Chapter 12 Reunites Old Friends for Some Raiding

Surprise! Midi-chlorians are still a thing.

Despite the big name drop last week, The Mandalorian once again swerved from its seeming direction to deliver an action-packed side story. Of course, even in avoiding a major tease, it shed some light on one of the series core mysteries. Let’s take a look at this week’s episode and what it means for Din Djarin (Pedro Pascal), the Imperial Remnant, and the New Republic. 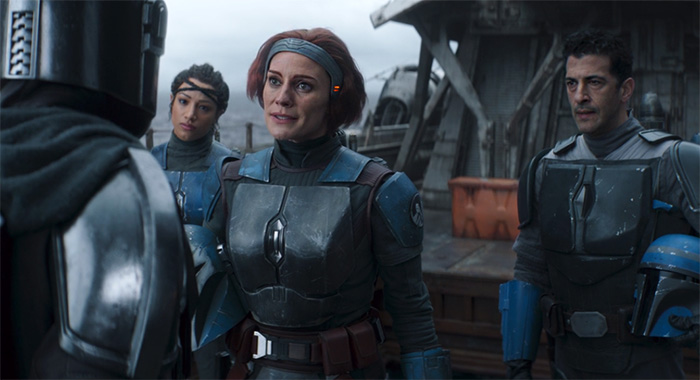 Djarin and his ward made their way in “Chapter 11” to the estuary moon of Trask, where the Frog Couple promised him he could find a Mandalorian covert. Instead of a camp, he found Bo-Katan Kryze (Katee Sackhoff), heir apparent to the seat of Mandalore, and her elite Nite Owls. After assisting them in commandeering an Imperial ship fulled with Mandalorian weapons, Kryze told Djarin of a Jedi named Ahsoka Tano taking shelter on the planet Corvus. Though his ship was badly damaged in the trip to Trask, he continued on his quest.

A Reunion Kicks Off a New Mission on The Mandalorian 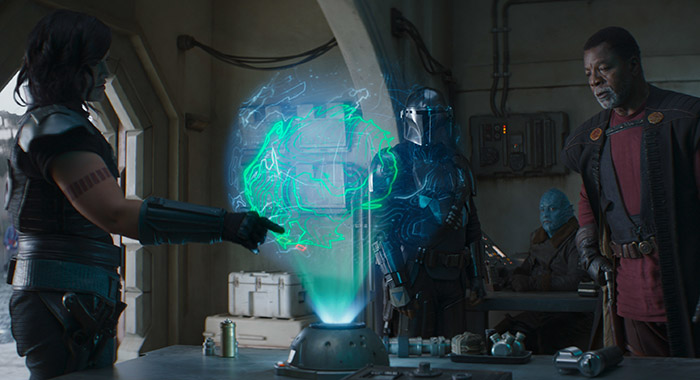 Realizing the Razor Crest will never make the trip to Corvus, Djarin diverts to Nevarro — the planet where his association with the Child began — for repairs. There, he finds Greef Karga (Carl Weathers) and Cara Dune (Gina Carano) have cleaned up the spaceport enough for a lively population of settlers to plant roots. The cantina, for example, now houses the local school.

Leaving the Child at the school, Djarin, Karga, Dune, and Mythrol (Horatio Sanz) — the first bounty we saw Djarin collect on the show — set out for an Imperial base outside the green zone Karga carved out on the planet. The plan is simple: dispatch the few remaining Imps and blow up the base.

Infiltrating the base goes easily enough, as does overloading its power source. But on the way out, the team discovers Dr. Pershing (Omid Abtahi) was using the vial of blood he extracted from the Child to experiment on some unfortunate test subjects. Djarin also learns Moff Gideon (Giancarlo Esposito) is still alive.

Djarin jetpacks back to town while the rest flee in an Imperial recon transport. After a chase with some speeder bikes and TIE fighters, a repaired Razor Crest dispatches the remaining Imp forces and the base explodes.

Unfortunately, one of Karga’s men still works for Gideon and planted a tracker on the Razor Crest. 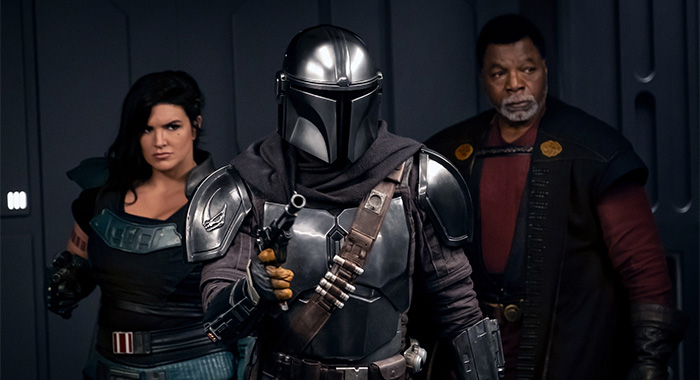 In the hologram Mythrol recovered at the base, Dr. Pershing mentioned the “high M-count” of the blood he extracted from the Child. The obvious implication here is a word some Star Wars fans dread: Midi-chlorians.

First mentioned in Star Wars: Episode I — The Phantom Menace, Midi-chlorians are described as microscopic companion organisms residing in the cells of all living beings. According to Qui-Gon Jinn, these tiny creatures connect everyone to the Force. Also, it seems, the higher concentration of Midi-chlorians in a being’s bloodstream will result in a greater ability to use the Force. It is a biological determinant to the mysticism of the Jedi older fans felt cheapened the magic of Star Wars.

The film also told us Jedi Master Yoda and Anakin Skywalker had the highest Midi-chlorians counts recorded by the Jedi Order. While this information may not be public to all of the galaxy, it is clear Gideon — a former intelligence agent — was aware of Midi-chlorians counts and, presumably, the likelihood of anyone from Yoda’s species having strong connection to the Force.

And based on Pershing’s holo-message, we gather Gideon is trying to create counterfeit Force-users via blood transfusion. Many suspected this was the case during the first season, but confirmation of this endeavor leads to many questions. 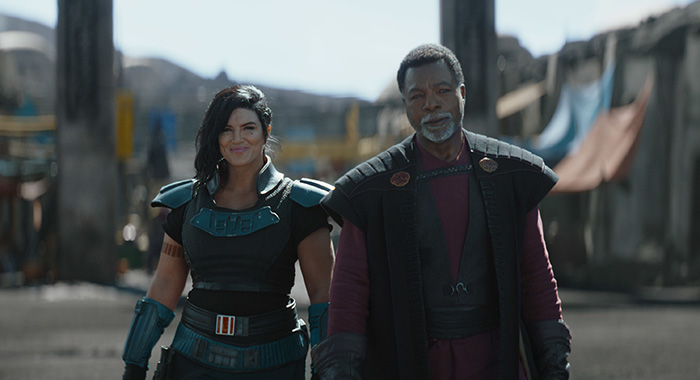 Before we ask those questions, though, we need to talk about Karga and Dune. The pair have done a find job turning the Nevarro settlement from a hive of scum and villainy to a lively but safe township. The state of its streets suggest some time has passed since Gideon raided the cantina, but it also suggests just how effective the pair became afterward. Karga has reclaimed the “magistrate” title he seemingly abandoned after the fall of the Empire, while Dune has been deputized as the local marshal. They also seem happy in these roles.

Well, Karga is happy, anyway. Dune’s conversation with Carson Teva (Paul Sun-Hyung Lee) suggests she may tire of life on Nevarro like she tired of working security for New Republic diplomats. Teva left behind a badge, but her ambivalence toward it — and him — means there is a story there to tell.

Of course, we should acknowledge many former fans of the character, and Carano herself, would rather leave that story untold. Vanity Fair released an article about the actor’s recent struggles on social media and how it has left a lot of people burned. The timing of the article is clearly no accident as Dune made her return appearance this week.

Cara Dune’s image problems in our reality aside, we would like to see more of the New Republic. As Karga notes, their handling of the Outer Rim is not popular, as it is more aggressive than the Old Republic’s policies toward remote worlds — and perhaps as futile as the Empire’s attempt to tame those systems. We also know it is a doomed government thanks to Star Wars: The Force Awakens and the Aftermath novel series, but its deficiencies as a governing body deserved to be dramatized, either in The Mandalorian or some subsequent Star Wars show.

Meanwhile, it came as no surprise to see the show steer away from Ahsoka Tano. Like the Boba Fett tease in the season opener, the program — and principal writer Jon Favreau — delights in defying expectations and delaying payoffs like Ahsoka’s live-action debut. Although, next week’s episode is reportedly called “The Jedi,” so we’ll hold off on any other comments about Favreau’s pace until then.

That said, there is an elegance in revealing part of Gideon’s plan here at the season’s mid-point. He needs the Child because of the Force, but his greater need for Force-abilities remains in the shadows. Although, we imagine all that Dark Trooper–esque armor he’s hoarding on his ship might have something to do with it.

Questions for the New Era 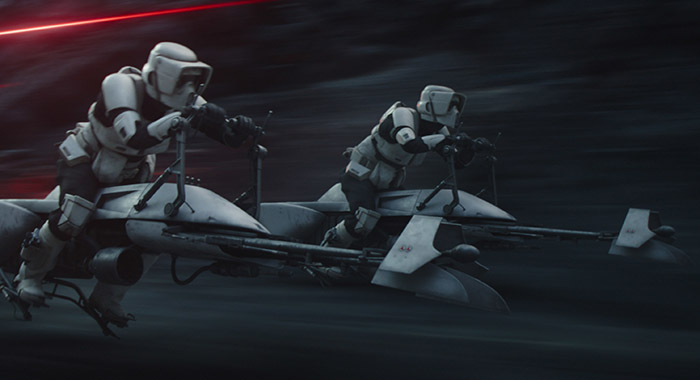 Gideon’s plan forms the basis for most of our questions this week as it is, by far, the most intriguing development.

Is Gideon Aligned With Other Remnants? Once his aide referred to their spy being rewarded in the “new era,” we wondered if Gideon is allied with the Imperial Remnants who will eventually become the First Order. According to other Star Wars media, the First Order was formed by remnants who retreated to the Unknown Regions sometime after the Battle of Jakku. That battle took place four years prior to the events of The Mandalorian. It is possible Gideon is doing their dirty work on the Outer Rim, but it is equally possible he is trying to set himself up as a new Emperor.

Is Gideon Assisting the Creation of Snoke? Considering Snoke’s origins were never definitely outlined in the Sequel Trilogy, there is room here to give him a more interesting backstory. We know he was a strandcast clone created on Exegol as part of Sheev Palpatine’s long-term goal to retake the galaxy. But as strandcasting does not necessarily lead to Force-sensitive clones, Palpatine’s underlings may have needed to discover a way to inject Midi-chlorian-rich blood into the Snoke construct, who is apparently already active by the time of The Mandalorian. As it happens, Snoke would later tell Ben Solo (Adam Driver) he was not “born” as Snoke, but “became” the enigmatic Force-sensitive. If Gideon is involved with this aspect of the Sith Lord’s grand design, is he in direct contact with Palpatine?

What Is the New Republic’s Interest in the Outer Rim? The Empire tried to subjugate the region, but the Old Republic more or less abandoned it. Why is the New Republic trying so hard to present itself as the lawful government to worlds less concerned with galactic politics? Is it a favor to the New Republic’s favorite Tatooine farmboy or are they worried it is a haven for Imperial loyalists? The latter seems likely considering the Imperial base still in operation on Nevarro, but something brought the Republic out there before Djarin carved a path of destruction across the far-flung reaches of the galaxy.