Was that really You Know Who? How did that happen? So, there are going to be sequels? We answer the major questions raised by that major cameo. 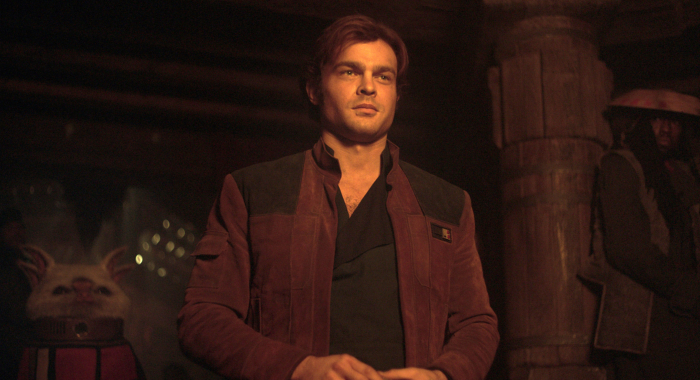 OK, let’s talk about that big cameo at the end of Solo.

Huge spoilers follow, obviously, because it’s a major twist that clearly sets up a sequel and brings back a character from the previous films – and he’s probably the last one you’d predict. If you don’t want to know what, who, when, why, and what’s next, stop reading. But if you do, let us answer some questions we know you have on your mind.

So, what the hell happened at the end of the film?

As Tobias Beckett (Woody Harrelson) is marching Chewbacca away to his likely death after the demise of Crimsom Dawn crime boss Dryden Vos (Paul Bettany), Vos’ former right hand Qi’ra (Emilia Clarke) tells Han to go after them, implying she’ll be right along. But once Han’s outside of the ship she pulls a signet ring from the dead hand of Vos and uses it to make contact with his mysterious employer via hologram – who turns out to be Darth Maul!

And as Maul instructs Qi’ra to come join him on Dathomir, the entire theater goes “…but didn’t Obi-Wan kill that guy?” How is he here? Wait, is this set before The Phantom Menace and Han is meant to be 50-something in the first film? WHAT IS GOING ON?”

Short answer: No, Solo is about 10 years before A New Hope, meaning that Maul is in great health for someone cut in half decades earlier. But you’d need to have watched the animated series to know this. Here’s a handy timeline that might help.

OK, let’s assume I’m not going to watch all of The Clone Wars animated series. What happened to Maul between getting Obi-Wanned in half and turning up in that hologram?

This skips over a lot of the details but you can explore the shows at your leisure if you feel so inclined: Maul survived his unexpected bisection on Naboo, thanks to his Sith powers fueled by his burning hatred of Obi-Wan – exactly like Anakin after Obi-Wan diced and lavaed him in Revenge of the Sith! Honestly, as far as personal health interventions go, hating Obi-Wan really is the Sith equivalent of giving up smoking or removing sugar from one’s diet.

Anyway: the top half of Maul ended up dumped on an outer rim garbage planet where he built cybernetic legs from scavenged droid parts and eked out an existence of sorts, driven mad by pain and anger, until he was discovered and rescued by his brother, Savage Oppress.

He brought the mad Maul back to Dathomir where their mother, the Nightsister witch Mother Talzin, restored Maul’s sanity and fitted him with cybernetic Battle Droid legs, at which point Maul decided he wanted revenge on Obi-Wan and Maul’s former master Darth Sidious, who by this point had a new apprentice in the form of Count Dooku. Maul took Oppress as his own apprentice and set off in search of vengeance.

However, after a strike on Kenobi failed, the pair were found wounded and unconscious by the Death Watch, a group of Mandalorian mercenaries – think Jango and Boba Fett – who formed an alliance with a view to ruling the galaxy (and gave him new and better legs to boot).

And with the governments and armies busy tearing themselves apart in the Clone Wars, the brothers decided that they were going to achieve their ends by uniting the various underworld groups under their command – which they did through often bloody means.

This group, which included the Hutts (as in Jabba) and Black Sun (who were the antagonists in the now non-canon Shadows of the Empire), ended up being loosely affiliated with Maul’s own syndicate. In The Clone Wars it’s called the Shadow Collective and presumably this later morphed into Crimson Dawn – which is who Solo characters Dryden Vos, Qi’ra and Tobias Beckett all worked for. Vos even has crimson-colored Mandalorian armor in his quarters, which is a bit of a giveaway.

And that’s where the film got up to: Crimson Dawn have more or less united the criminal underworld, Maul is their leader, and Han and Chewie are now heading to Tatooine to discuss a job with a big crime lord – the assumption being Jabba, but then again, Maul thinks they’re responsible for Vos’ death and wants revenge, so maybe our heroes are walking into a trap.

OK, so what do we think’s going to happen next?

Unfortunately for Maul, we know what happens about seven years after Solo (or, if you’d prefer, three years before A New Hope) because he also featured heavily in the Rebels animated series.

The eventual fate of Crimson Dawn is unknown, but Maul gets trapped on the planet Malachor for years while searching for a Sith artefact, and after escaping has various run-ins with the Rebels team and Anakin Skywalker’s former padawan, Ahsoka Tano, before… you sure you want to know this?

OK: he duels with Obi-Wan yet again, and is finally killed. And yes, we see him actually die this time. In Obi-Wan’s arms, in fact. It’s very moving.

Does this mean we now have to absorb all the extra material to know what’s going on in the movies?

Maybe. At the very least, the films are now drawing on the canonical animated series. Which they did with Rogue One as well – the Ghost is one of the ships in the final battle and Saw Gerrera was a Clone Wars character before appearing in the film (and then returning in Rebels, as it happens). But this is the first time that what happened to a major character offscreen figures into the cinematic universe.

But it’s hard to be sure. Always in motion, is the future.

Some guy in a swamp once.

Solo: A Star Wars Story is in theaters now.