Movies that would have been better off leaving a bit more on the cutting room floor.

Let’s get one thing straight, right off the bat: making a movie can be insanely difficult work. Making a good one is even harder, and sometimes, even the films we love contain a scene or two we wish had never made it into the final cut. With that in mind, we on the RT editorial staff decided to put together a little list of scenes that, if only removed, would have made some bad movies good and some good movies great. Be forewarned: spoilers will abound here, so proceed with caution if you haven’t seen some of these films.

Stanley Kubrick tinkered with A.I., an adaptation of the Brian Aldiss short story “Super-Toys Last All Summer Long,” throughout the final decades of his life. Kubrick wanted the central character David, a robotic boy with the ability to love, to be an actual functioning robot; he abandoned the project each time it became clear robotics and special effects were not advanced enough to suit his vision. After his death, Kubrick’s friend Steven Spielberg took command of A.I., casting Haley Joel Osment as the lonely David, who embarks on a hopeless and nightmarish journey to become a real boy. The result is a discomforting mix of two very different directors’ sensibilities, especially in the final sequence, when David becomes trapped at the bottom of the ocean and the film fast-forwards 2,000 years to a new ice age when humans have become extinct, and robots have evolved into highly intelligent creatures. They grant David his impossible wish of spending one more day with his human mother, and then the film concludes. Audiences are left scratching their heads at this overtly sentimental finale; had it been cut, A.I. would’ve been a more straightforward, taut, and tragic tale. And for the record, Spielberg has stated this ending was exactly how Kubrick had scripted it.

Being There, Hal Ashby’s classic 1979 comedy, is a masterwork in how to control the tone of a movie. It stars Peter Sellers as a simpleton who knows existence only through his banal television shows. A chance run-in with high society (literally, his character adopts the name Chauncey Gardiner) escalates in a comedy of errors that witnesses millionaires, businessmen, and even the president misinterpreting everything Chauncey does and says. The situations and positions of power Chauncey stumbles into grow more and more outlandish, but the movie itself stays grounded due to Sellers’ performance. Chauncey plays the blissful fool: we’re invited to laugh at him, but Sellers also gives Chauncey a perfect note of melancholy. There’s something sweet and sad about Chauncey, the center of a vortex of educated people who, in the drive for money and status, have lost touch with the simple joys of life. Being There‘s closing shot is literally lighter than air, so it’s a real travesty the most common cut of the film shows outtakes immediately during the end credits. The fourth wall is destroyed completely, and what was, just seconds ago, a magical journey is demystified by a clinical behind-the-scenes gag reel. Stop the film immediately when it ends and you’ll carry its magic with you for days.

Given the sheer awfulness of the Columbine massacre, Gus Van Sant’s Elephant was bound to be controversial. However, Van Sant’s film was admirably free of exploitation or elucidation — he didn’t depict the high school mass murderers with anything but cold detachment, and he made no effort to explain what drove the killers to act as they did. In fact, this matter-of-factness makes Elephant all the more chilling; in documenting a day in the life of a suburban high school from several different perspectives, Van Sant conjures a deeply ominous mood. However, there’s one scene that sticks out like a sore thumb: the moment when the two killers start kissing in the shower. It’s seriously unlikely that the openly gay Van Sant is implying that his characters’ homosexuality is the reason for their murderous rage; in fact, it’s hard to know exactly what he was going for here, since the scene marks a jarring tonal shift away from the dispassionate, show-rather-than-tell vibe of the rest of the movie.

Flight treats us to a gripping performance by Denzel Washington as a man struggling to overcome his alcoholism. So when he finally comes clean about his drinking in a very public way, we should see him get arrested, and then see the credits roll. That’s it — his redemption is that he finally admitted he had a problem. It’s the perfect note to end the movie. But instead we get another ending: a prison AA meeting. OK, fine. Then we get another ending: Denzel writing letters in his cell. That’s enough now. Wait, there’s another ending after that? Now he’s talking to his son. Do we really need to be force-fed every step of his recovery? No, we really don’t.

Both versions of Funny Games (the 1997 original German language and the 2007 American version) were directed by Michael Haneke (Amour), so they’re virtually identical, language aside… and so is the infamous “rewind scene.” Breaking the fourth wall to address the audience can be tricky enough, but including a sequence in which a character employs a remote control to literally “rewind” — and thereby erase — an earlier event in the film? Well now, that’s just preposterous. When two young psycho kids (Amo Frischare and Frank Giering; Michael Pitt and Brady Corbet in the remake) hold a family captive in its vacation home, the mother, Anna (Susanne Lothar/Naomi Watts), eventually strikes back, grabbing a shotgun (conveniently placed beside her) and blowing away one of the attackers. In the audience, we scream, “YOU GO!” but alas, we were just being toyed with. Haneke treats us like puppets by manipulating us, waving something big in front of us and then taking it away. It’s a case of, “You wish this is what happened. Psych!” Some fans argue that this tactic is brilliant, that if something makes us angry, the result is a success. But in this case, the audience’s time has been wasted. Removing the rewind and fourth-wall elements would make either version of Funny Games far more watchable.

The Hobbit: An Unexpected Journey

When Peter Jackson announced that his Middle-earth follow up, The Hobbit, would be stretched into a trilogy akin to the Lord of the Rings saga, many wondered how he would manage such a feat with significantly less source material. The answer, of course, was that Jackson’s adaptation would include plot elements from J.R.R. Tolkien’s supplemental notes and texts, as well as new scenes to give more screen time to familiar faces… and that’s where he may have overstepped his bounds. In an entirely fabricated sequence, Gandalf the Grey (Ian McKellen) meets with the White Council in Rivendell, mostly to discuss the impending threat of an ominous necromancer (gee, who could that be?) who never actually shows up in An Unexpected Journey. The scene serves purely to foreshadow what will come in following installments and to provide a more concrete connection to the LOTR series by reintroducing characters like Galadriel (Cate Blanchett) and Saruman (Christopher Lee), neither of whom actually appear in Tolkien’s Hobbit. That’s all well and good, except that the largely action-driven film comes to a screeching halt here, hampered by compulsory exposition and needless cameos. Leaving that bit on the cutting room floor would have ensured a much brisker pace.

They don’t call Alfred Hitchcock “The Master of Suspense” for nothing, and Psycho is one of the great director’s most potent fright fests. It laid the groundwork for modern horror, and subverted audience expectations in audacious ways; not only did Hitch kill off his heroine at the halfway point, he also made stab-happy Norman Bates into a sympathetic character. In fact, Psycho was so far ahead of the curve, Hitchcock felt the need to explain to the gobsmacked masses why the owner of the Bates Motel wore a dress and had antagonistic conversations with his “mother.” Thus, he included a coda in which a psychiatrist (Simon Oakland) explains Norman’s twisted mental state. Then he explains some more. Then he continues to explain, just to be sure we didn’t miss anything. Hitchcock closes the film with a haunting final shot — he superimposes “Mother’s” skull over Norman’s face — thereby saving the ending from going completely off the rails; as Roger Ebert wrote, “I have never encountered a single convincing defense of the psychiatric blather.”

Singin’ in the Rain

Singin’ in the Rain is packed to the gills with entertainment, from its clever meta plot to the legendary dance sequences with Gene Kelly, Donald O’Connor, and Debbie Reynolds. The scene to skip is a fantasy sequence Kelly dreams up towards the finale, a literally showstopping number that grinds the movie’s zippy pace to a halt. It’s understandable why this was included — the only way to see a movie in 1952 was to haul your dapper keister to a theater, and Hollywood wanted to cram in as much film and celebrity to make it worth your money. The choreography is more complex during the dream sequence, involving dozens of people instead of just the three stars, and the costumes more vibrant and varied. Cyd Charisse also shows up as Kelly’s dancing partner, which effectively diffuses the budding romantic plot between Kelly and Reynolds. Skip this entire sequence and shorten the movie down to a perfect, crisp 90 minutes.

When contemplating scenes that should be skipped, you can’t forget about the ridiculous jazz club bit in Spider-Man 3. You know the one, where Peter (Tobey Maguire) takes Gwen Stacy (Bryce Dallas Howard) to the jazz club where MJ (Kirsten Dunst) works, only to show off and deliver a god-awful dance performance that is so out of place it simply leaves you feeling dumbfounded. Yeah, that’s the one. In a film that gave us a trifecta of villains and another iconic love interest of Peter’s, it was downright disappointing to throw in such a useless scene. At this point, we had already seen Pete trash Eddie’s camera and supposedly kill Flint Marko, and we saw the symbiotic organism latch onto Peter, creating a costume-like skin. With so much to cover in this film, it’s almost insulting to the audience to waste time on indulgences like this. It would have been preferable for this scene — and Peter Parker’s emo eyeliner — to take a hike.

As obnoxious as Jar-Jar Binks is, as boring as the political speeches are, there’s one scene that needs to be cut more than anything else: the scene when Qui-Gon Jinn tests Anakin’s midichlorian count. Up until that point, you could assume that anyone could use the force; it was just a matter of belief and willpower. That lent a hopeful and almost religious air to the Star Wars universe. But then George Lucas had to go and use a scientific explanation for the Force, which took a lot of the magic out of Star Wars. Not only that, but now Yoda’s “luminous beings” speech in Empire Strikes Back doesn’t really make sense anymore. 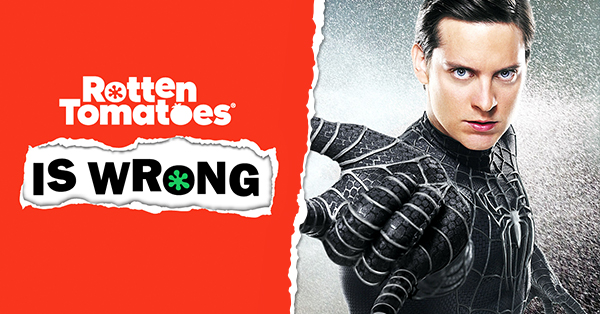 “Rotten Tomatoes Is Wrong” About… Spider-Man 3