Queen of Noise: Floria Sigismondi on The Runaways

Short-lived LA band The Runaways were in many ways ahead of their time: predating punk and the riot-grrrl movement that would later claim them as their own, the all-girl quintet, led by guitarist Joan Jett and singer Cherie Currie, dared to play their own instruments and cover sex, drugs and rock ‘n’ roll from a female perspective in a world dominated by stadium rock machismo. That they were seen by some critics as a manufactured jailbait stunt — the band members were all underage — seems almost beside the point in retrospect. This year’s film The Runaways, written and directed by Floria Sigismondi from Currie’s memoir Neon Angel and Jett’s recollections, explores the band’s 1975 creation and turbulent not-quite-rise and fall at the hands of svengali producer Kim Fowley, while vividly capturing the bond between Currie (Dakota Fanning) and Jett (Kristen Stewart), two “dead end kids” clinging to each other in the media storm. With the movie opening in Australia this week, we spoke to Sigismondi about the film and just whose version of the controversial events it depicts.

RT: A film can sometimes live or die on its opening shot, and yours — Cherie’s first menstrual blood hitting the pavement — is a killer. What inspired that?

FS: Well, one of the things I was drawn to about making this film was that it was about young girls coming of age, and I thought, ‘How can I make a statement in the beginning of the film that personifies that time when a young girl is turning into a woman?’ — and there was that very physical body change that leads to other kinds of body changes. [laughs] The film is about girls, and that seemed to me to kind of jump out as an interesting way of starting the film, to tell people where they’re at and what kind of film they’re gonna see — about these girls who are young and their bodies are changing. It also gave me the chance to set the tone and the exterior of the Valley at the same time.

You also got to set the musical tone of the time with that great track, “Roxy Roller.”

Yeah, that totally brought me back to when I was a kid. It was one of those tracks they played on the radio all the time.

It’s such a cool song. Was that the first time that you heard The Runaways, when you were a kid?

I actually heard them a bit later. I’d moved to Toronto as an arts student and I heard them at the clubs. I was working at a club and they played them all the time. So I heard them then, a little bit later — I only would’ve been, I think, 10 [at the time], so it wouldn’t have been on my radar.

What was it that appealed to you about the band?

I mean, I loved the rawness but I loved that the girls played their instruments; they were super cool and they wrote their own songs. So there was a lot of appeal, you know. I guess I became a fan straight away.

At what point did the idea of turning Cherie’s book [Neon Angel] into a movie come about?

I was approached by Brian Young, who manages me now, and he took me to see [producers] the Linsons, and John and Art had bought the rights to the book. I read the book and I came back in. The film isn’t strictly, or solely, based on her book. It’s based on the book for Cherie’s side and then it’s based on a bunch of interviews that I had with Joan and Kim and other people. Then there was also all of my research that I had. Luckily for me there was a big sort of media explosion, here in the US and in Japan, so there were a lot of interviews that were really great to read because they were in the girls’ voices, in the first person, so I was really able to get a sense of how they spoke and all that stuff. That was really fun, to research all that stuff; and especially Kim’s interviews, if you could imagine.

Did you get a lot of feedback from Joan and Cherie during the process?

I got a little bit of feedback once they’d read the script, and it was mostly in details, you know — “I drank this” or “I did that kind of drug,” [laughs], you know what I mean, details of certain things. But I had taken license into dramatising certain things. When you have peoples’ lives but you have an hour and a half to tell them, you’ve got some constraints to deal with. So for me it was like, how do I, after meeting these people and reading about them, how do I personify the characteristics in a scene? So a lot of the times I was using scenes to do that — they weren’t necessarily scenes that they could comment on, but I did use them, especially for Cherie and her relationship with her sister, and that was quite important, but also in their relationship to Kim. I mean, I had this challenge of Kim being this character that helps them but in Cherie’s eye is quite intimidating, and in Joan’s eye he’s like funny and a friend and a partner in crime; so his character has to weave that delicate line between those two, because they both had extremely different views on him, and still do.

Between that and seeing [former bassist] Vicki Tischler-Blue’s documentary Edgeplay, there seem to be very different views as to just how creepy or manipulative Kim Fowley was. What’s your take — did you get speak to him directly?

Yeah I did. I had a couple of interviews with him and they lasted a long time. I think the first one I had was five hours. What I gathered from him, and how he also explained it to me, was that he was a different person to different people. If he walked in to a record company he’d be that guy, and if he walked in to meet some of the girls’ parents, he was another guy; and then when he was alone with them and he was the club guy, he was very different. I think he was a little bit of a chameleon, and I wish I had time to have more of that scene where he comes to meet the mum, the “I want to take her on tour” thing. It would have been fun to watch him do that. So I gathered that in life he was different kind of people. I think for Cherie she looked to him as possibly a father figure, because her father was not around; and I think he could not be that figure, although I’m sure he was very persuasive to the mum, in having her leave home and go on tour. And Joan just thought he was hysterical. [laughs] 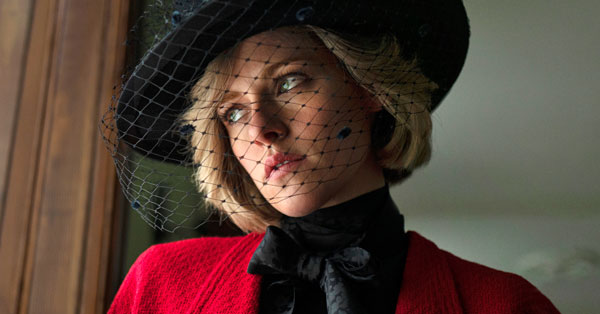 How Kristen Stewart Found Her Way to Princess Diana in Spencer