Own Your Very Own Life-Size Skinwalker!

Who doesn't need a giant jean-jacketed werewolf for the foyer?

If you like werewolves and are looking for a conversation starter for your living room, you’re in luck. After Dark Films is giving away one life-size Skinwalkers creature, designed by Stan Winston Studios. Tres chic!

Skinwalkers, opening Friday, is a tale of modern day warring werewolf clans (from Canada, eh) battling it out using guns, sex, and their own bloodthirsty urges. One life-size Skinwalker — a bit Teen Wolf-esque, as you can see from the picture below — will go to the lucky winner of After Dark’s drawing. Who needs a welcome mat when they have this hairy fella guarding the pad?

The contest asks you to send in your opening day Skinwalkers ticket stub (check the official rules for your entry options).

More on Skinwalkers, which appears to be not screening for critics: Thirteen-year-old Timothy (Matthew Knight) and his mother (Rhona Mitra) are about to find out that he’s half-werewolf and that their in-laws, full-blooded but benevolent werewolves, have been protecting them for years. A pack of blood-lusting werewolves — or Skinwalkers — are coming after Timothy, whose powers will decide the fate of their kind.

While action-horror flicks tend to bear the brunt of critical analysis, this one has a few interesting things going for it. Mitra, better known of late for her television roles (Nip/Tuck, anyone?), looks exceptionally lethal when packing heat, as we’ll see next year in Neil Marshall‘s Doomsday. Elias Koteas, who plays the good werewolf uncle, has matured into a decent character actor since his Casey Jones days (Teenage Mutant Ninja Turtles, anyone?). And there’s Jason Behr (Roswell, anyone?), who is possibly the last actor you’d ever imagine as a bloodthirsty bad guy.

By the way, the Skinwalkers contest creature appears to be Behr’s jean-jacketed character, Varek, in full Skinwalker mode. 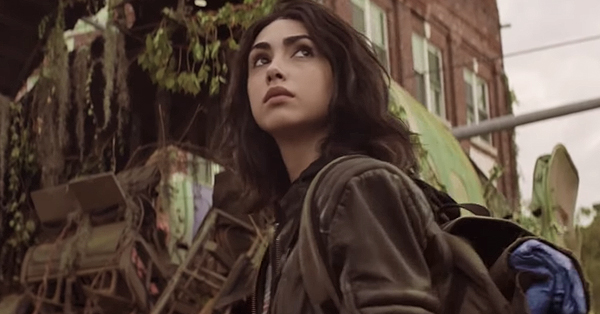 Watch the First Footage From The Walking Dead‘s Newest Spinoff