Critics say Pixar's latest doesn't break any new narrative or visual ground, but it's a solid, deeply personal film that should resonate with families.

After a decade of mostly producing sequels, Pixar begins a new era of original animated features with the release of Onward. Featuring the voices of Chris Pratt and Tom Holland, the fantasy adventure is co-written and directed by studio vet Dan Scanlon, who previously helmed Monsters University. While still technically garnering Fresh marks from critics, Onward is being labeled a somewhat lesser Pixar effort in the first crop of reviews. Whether it’s too sub-par for recommendation depends on the writer and may depend on your appreciation for its sentiments as well.

Here’s what critics are saying about Pixar’s Onward:

How does it measure against other Pixar movies?

Onward may have taken my number one Pixar spot, and I’m not ashamed to say it.
– Rachel Leishman, The Mary Sue

Onward isn’t Pixar’s best film, but it’s one of its most personal.
– Kristen Acuna, Insider

The majority of Pixar’s films are special for one reason or another. Which makes the generic bro humor and familiar Dungeons & Dragons role-play vibe of Onward a let-down.
– David Rooney, Hollywood Reporter

This is what a disappointing Pixar film is: a perfectly fine one.
– Josh Spiegel, Slashfilm

This may not be Pixar’s worst movie… but it sure feels like the weakest.
– Roger Moore, Movie Nation

Pixar, in its very bravura, has more than earned the right to put out a movie like this one — an unabashed piece of product, a kind of Pixar place-holder made with a tiny dash of soul.
– Owen Gleiberman, Variety

While Onward may not be the strongest Pixar movie, it still delivers on everything fans have come to expect from an animated film produced by the studio.
– Molly Freeman, ScreenRant

Ian, Barley, and their dad’s legs’ story is a worthy addition to the studio’s impeccable catalogue. I went in with doubt. Now, I can’t wait to see it again.
– Alison Foreman, Mashable

While its emotion and structure are certainly uneven, there’s not anything truly bad to say about it.
– Germain Lussier, io9

Is it original enough?

Some may find that Pixar is retracing its steps a bit… [but] Onward rarely feels formulaic because its characters and setting are so specific.
– Matt Goldberg, Collider

The emotion in Onward is earned, and the situational setup seems unique. It’s all… fine, but also overly familiar.
– Josh Spiegel, Slashfilm

How is the story?

Save for a few by-the-book action sequences and corny gags, Onward maintains its clever balance of formula all the way through an emotional climax.
– Eric Kohn, IndieWire

While Onward is a distinctly colorful animated film, its story feels like a variant on a low-key dramedy you might find at Sundance.
– Josh Spiegel, Slashfilm

This is a movie about two kids resurrecting their dead dad’s crotch and it’s just the WEIRDEST thing.
– Mike Ryan, Uproxx

Are there memorable characters?

In addition to the filmmakers’ forward-thinking approach to dealing with grief, they approach traditional character archetypes with just as much innovation.
– Courtney Howard, Fresh Fiction

There’s a lesbian character in Onward… but the most revolutionary thing that Pixar has done in advance of the movie’s release is not tell anyone about it.
– Sam Adams, Slate

Holland and Pratt have a winning rapport, in part because they could be starring in a parallel-universe Avengers spinoff with Spider-Man and Star-Lord.
– Justin Chang, Los Angeles Times

[Pratt’s] vocal performance is the film’s highlight, as he returns to his Andy Dwyer days.
– Josh Spiegel, Slashfilm

Combining stellar visual comedy with memorable dialogue, Onward makes the most of every joke and bit on its path.
– Alison Foreman, Mashable

Onward is 100 percent Weekend at Bernie’s for kids… that the filmmakers did this is funnier than most of the actual jokes in the movie.
– Joshua Rivera, The Verge

Onward wisely leans more on humor than drama to get its message across.
– David Sims, The Atlantic

Onward may be hilarious, but it is so much more than that.
– Tessa Smith, Mama’s Geeky

The situational humor in Onward is fleeting.
– Josh Spiegel, Slashfilm

There isn’t a laugh in it.
– Roger Moore, Movie Nation

Pixar being Pixar, will have you laughing constantly until the climax reduces you to a puddle of tears.
– Matt Goldberg, Collider

So it’s another Pixar tearjerker?

Onward isn’t Pixar’s biggest tearjerker, but expect to find yourself tearing up a bit throughout.
– Kristen Acuna, Insider

Get ready to ugly cry – especially those who’ve lost someone near and dear.
– Courtney Howard, Fresh Fiction

What makes this one pretty good, and sometimes inspired, is that… all those emotions seem to spring naturally from the story’s intricate roots.
– Justin Chang, Los Angeles Times

As I’m getting ready to write about the heart of this movie, I’m crying again.
– Rachel Leishman, The Mary Sue

Onward is a visual treat throughout. It almost goes without saying now with Pixar that everything looks gorgeous, but the fantastical world they’ve built is vibrant and packed with detail.
– Ian Sandwell, Digital Spy

From a visual standpoint, the movie offers few surprises… but script and character generally overwhelm the need for technological innovation.
– Eric Kohn, IndieWire

The backgrounds around Barley and Ian are so meticulously designed, with even photorealistic dust particles floating around the house, that it jars with the more traditionally cartoonish design of its fanciful characters.
– David Crow, Den of Geek

Who is Onward best suited for?

Far more a film for adults than Pixar’s ever done.
– Robert Daniels, 812filmreviews

If you like classic, high fantasy settings inspired by stuff like Dungeons & Dragons and Magic: The Gathering, you’ll love what Scanlon and his team have done here with Onward.
– Matt Goldberg, Collider

The best thing that Scanlon’s film does is that it gives audiences of all ages (but especially young kids) the tools to work through sorrow in a safe space.
– Courtney Howard, Fresh Fiction

Onward is in theaters on March 6. 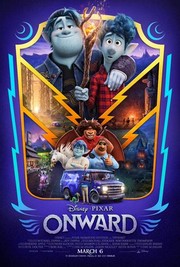 #1
Adjusted Score: 102.658%
Critics Consensus: It may suffer in comparison to Pixar's classics, but Onward makes effective use of the studio's formula -- and stands on its own merits as a funny, heartwarming, dazzlingly animated adventure.
Synopsis: In "Onward," teenage elf brothers Ian and Barley Lightfoot (voices of Tom Holland and Chris Pratt) get an unexpected opportunity... [More]
Starring: Tom Holland (II), Chris Pratt, Octavia Spencer, Julia Louis-Dreyfus
Directed By: Dan Scanlon

Vote in the Disney Animated Films Showdown – Round 3