This week’s Ketchup brings you another ten headlines from the world of film development news (those stories about what movies Hollywood is working on for you next).  Included in the mix this time around are stories about such titles as Bumblebee, Godzilla: King of the Monsters, and The New Mutants. 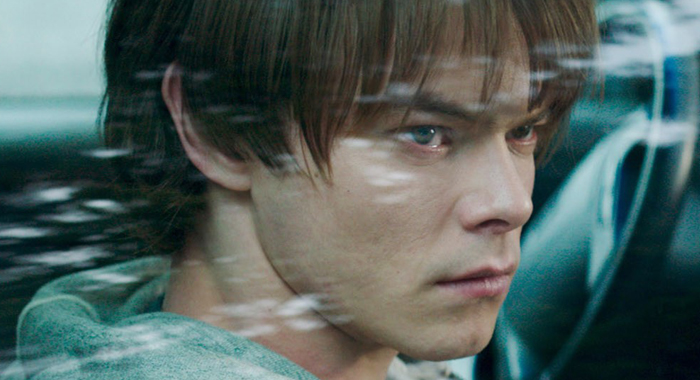 It was a year ago we first heard that two of the stars of The New Mutants (the long-anticipated X-Men spinoff) would be Maisie Williams (Arya Stark from Game of Thrones) and Anya Taylor-Joy (The Witch) as Wolfsbane and Magik, respectively. (It was finally confirmed last month). In the meantime, we still didn’t know who would play the other three core New Mutants: Cannonball, Sunspot, and Danielle Moonstar. With the release date less than a year away (April 13, 2018), Josh Boone (The Fault in Our Stars) has to start filming really soon, so this week, we finally got our answers. The highest profile of our three new stars is probably Charlie Heaton, who starred in Stranger Things as brooding teenager Jonathan Bryers, and who has now been cast as Southern rocket-fueled teenager Cannonball. Another Netflix series, 13 Reasons Why, also gave us Henry Zaga, who will also star as Sunspot. Finally, there’s newcomer Blu Hunt, who won an international search to play Native American mutant Danielle “Dani” Moonstar. Rosario Dawson will also co-star in The New Mutants as onetime X-Men member Dr. Cecilia Reyes.

1. SILICON VALLEY STAR THOMAS MIDDLEDITCH TO FACE DOWN GODZILLA: KING OF THE MONSTERS

As Wonder Woman neared its release, the news from Warner Bros this week mostly had to do with their Godzilla franchise. The upcoming 2019 movie will be Godzilla: King of the Monsters (3/22/19), which will be the direct sequel to the 2014 Godzilla reboot (and might introduce Mothra, Rodan and King Ghidorah!). That film has already made some casting announcements, mostly about the film’s core family of humans: Millie Bobby Brown (Stranger Things), Kyle Chandler (Friday Night Lights), and Vera Farmiga (Bates Motel). We don’t know his role yet, but the newest cast member is Thomas Middleditch, who you might know from either HBO’s Silicon Valley or those recent Verizon commercials. King of the Monsters will be directed by Michael Dougherty (Trick ‘r’ Treat, Krampus), but we also learned who will direct its follow-up, Godzilla vs Kong, scheduled for May 22, 2020. Adam Wingard, who has focused on smaller scale horror like You’re Next, The Guest, and last year’s Blair Witch sequel, has made a deal with Warner Bros to direct Godzilla vs Kong, the movie that ties this year’s Kong: Skull Island directly to the Godzilla series.

2. THIS WEEK IN WAR CORRESPONDENT BIOPICS: CAREY MULLIGAN’S ON THE OTHER SIDE

We’ve known for a while about the untitled biopic about war journalist Marie Colvin starring Gone Girl‘s Rosamund Pike. This week, we found out Carrie Mulligan (The Great Gatsby) will be starring in her own war correspondent film, called On the Other Side, as Australian journalist Kate Webb. Unlike Colvin’s story, which culiminates with her encounters with ISIS, On the Other Side will focus on Webb’s experiences during the 1970s as a prisoner during the Vietnam War. Mulligan can be seen later this year in the dramas Wildlife and Mudbound.

Amy Schumer seems to enjoy pairing up with other female stars. There was Brie Larson in Trainwreck, Goldie Hawn in Snatched, and the upcoming comedy in which Jennifer Lawrence plays Schumer’s sister. The next actress to partner with Schumer in a movie will be Michelle Williams, who earned an Oscar nod this year for her powerful work in Kenneth Lonergan’s Manchester by the Sea. In the new comedy, called I Feel Pretty, Williams will play the boss of Schumer’s character, an insecure woman who suffers a fall and recovers, but begins to imagine that she’s “the most beautiful and capable person on the planet… [which] suddenly sees her climbing the ranks at the cosmetics company she works for, and thereby obtaining the respect of her idol and boss.” Before Williams starts filming I Feel Pretty, though, she’ll also be filming her role in Ridley Scott’s All the Money in the World, about the 1970s kidnapping of oil heir J. Paul Getty.

Peter Farrelly is best known as one half of the Farrelly Brothers, the directors of such comedies as Kingpin, Dumb and Dumber, There’s Something About Mary, and The Three Stooges. Lately, however, it looks like Farrelly is looking to change things up a bit, starting with his next film, Green Book. The indie period piece will tell the true story of a NYC bouncer named Tony Lip who takes a new job as the chauffeur of a young piano prodigy during a tour of the “Deep South” in 1962. Viggo Mortensen is currently in talks to star as Tony Lip, which would be his first major role since last year’s Academy Award nominated Captain Fantastic. You may also know the real Tony Lip (1930-2013) from his roles as gangsters and mob associates in The Godfather, The Sopranos, and Donnie Brasco.

5. MAGGIE GYLLENHAAL TO SCHOOL EVERYONE AS THE KINDERGARTEN TEACHER

Maggie Gyllenhaal has been fairly quiet the past couple of years, save for a few short films and the upcoming HBO series The Deuce (premiering on September 10), but she’ll be returning to the big screen in an English-language adaptation of the 2014 Israeli film The Kindgergarten Teacher, to be directed by Sara Colengo (Little Accidents). Gyllenhaal will play a Staten Island kindergarten teacher who “discovers what may be a prodigious five-year old poet in her class, she becomes obsessed with the child and his talent— risking her career, family, and freedom.” The Kindergarten Teacher is being produced by Maven Pictures, the indie company behind movies like Bernie and The Kids Are All Right.

6. CAPTAIN UNDERPANTS TO BE FOLLOWED BY THE WITCH BOY and A PET BLACK HOLE

It might have seemed strange this week that 20th Century Fox scheduled their own animated superhero movie, Captain Underpants, directly against the highly anticipated, 80-years-in-the-making Wonder Woman. Even though Captain Underpants was clearly never going to do any better this week than #2, that might not be so so bad after all, since it was made on a budget of just $38 million (Wonder Woman, by contrast, reportedly cost $149 million). This week, Fox Animation announced two more films, beginning with an adaptation of Molly Ostertag‘s graphic novel The Witch Boy, about a 13-year-old boy who is expected to become a shapeshifter (like his other male relatives), but follows the female family tradition of being a witch instead.  The second new Fox Animation project this week is called The Care and Feeding of a Pet Black Hole, which is somehow exactly what it sounds like.

7. RON HOWARD TO FOLLOW THE BEATLES: EIGHT DAYS A WEEK WITH A PAVAROTTI DOCUMENTARY

Last year, Ron Howard took a detour from his usual feature films (while also directing Inferno) with the rock documentary, The Beatles: Eight Days a Week. The busy and prolific director of movies like Apollo 13 and The Da Vinci Code will next direct another musical documentary, but this time, it will be about the late operatic tenor Luciano Pavarotti. Imagine Entertainment has made a deal with Pavarotti’s estate to obtain access to a vast archive of footage from throughout Pavarotti’s life, much of which has never been seen by a wide audience (especially not since first broadcast).  Here’s some of what Ron Howard had to say about Luciano Pavarotti: “I am now going to school on this. For instance, I had no idea what a physical feat it is to generate those sounds, especially night in and night out. It is the function of years of dedicated training and a commitment to turn your body into that kind of instrument. It’s not just a matter of some people having a good set of pipes and others don’t.” Howard recently directed an episode of the cable series Einstein, and will return next year as the narrator of Netflix’s Arrested Development.

Bron Animation is a new Canadian animation company that has recruited a number of industry professionals who have worked on such movies as Cloudy with a Chance of Meatballs, Open Season, and Arthur Christmas. One of their first productions will be an adaptation of author Lois Lowry’s (The Giver) 2010 children’s book The Willoughbys, about four children who enjoy going off on adventures against the wishes of their “neglectful mother and father.” In April, we first heard that the movie will be narrated by Ricky Gervais. The voice cast has since been filled out a lot more: Martin Short and Jane Krakowski will voice the parents, who are “so in love with each other that they forget they even have children,” and Sean Cullen will voice the two twin brothers Barnaby A and B. Maya Rudolph will voice the nanny who watches the children, and Terry Crews will voice “candy mogul Commander Melanoff.” The Willoughbys will be directed by Kris Pearn, who previously codirected Cloudy with the Chance of Meatballs 2, and worked as an animator on The Pirates! Band of Misfits, Open Season 2, and Surf’s Up.

1. HAILEE STEINFELD IN TALKS TO STAR IN TRANSFORMERS SPINOFF BUMBLEBEE

In three weeks, Paramount Pictures will be releasing Transformers: The Last Knight (6/21/17), the latest film in what is now the studio’s biggest franchise. After that, Paramount will be expanding the franchise to include spinoffs, the first of which will be Bumblebee, scheduled for June 8, 2018. These spinoffs present opportunities to bring in new cast members, and this week, we learned who will follow in the footsteps of Shia LeBeouf, Megan Fox, and Mark Wahlberg. It sounds like it’s going to be Hailiee Steinfeld, who is probably best known for making a big debut with the Coen brothers’ remake of True Grit and last year’s The Edge of Seventeen. The Bumblebee spinoff will be directed by Travis Knight, who will be making his live-action debut after directing LAIKA films like Kubo and the Two Strings. As much as we like Hailee Steinfeld, and as wonderful as Kubo and the Two Strings was, all five of the Transformers movies to date have earned Rotten Tomatometer scores. Hopefully Hailee can help improve Bumblebee‘s chances.