Steven and Marc gain some insight with the help of a talking hippopotamus and an untrustworthy psychiatrist. 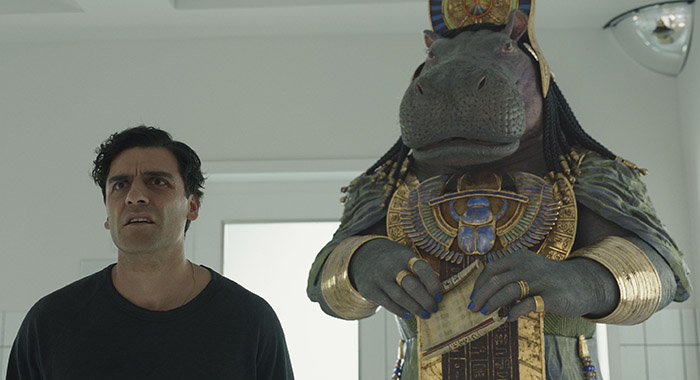 Where some series would use its penultimate episode to build up to a confrontation in the finale, Moon Knight’s fifth episode, “Asylum,” did something else: give us greater clarity on things we have been pondering since its premiere. It also left viewers with a shock so unexpected that it stunned a great swath of the internet into silence. But we’ve decided to work past that moment – and the terrible outcome it might represent – to look at some of the answers the episode finally provided. Answers can always lead to more questions, of course, so we’ll be presenting some new ones as Moon Knight journeys through the land of the dead for a reckoning with the past and a weighing of hearts.

Spoiler alert: The following contains details about the plot of Moon Knight episode “Asylum.” Stop reading here if you haven’t watched the episode and want to avoid spoilers.

Marc As the Primary and His Childhood Trauma

Throughout the season, Moon Knight left viewers wondering if Marc (Oscar Isaac) was an alter of Steven (also Isaac) or vice-versa. Back in the comics, Marc is the original identity, but the program started with Steven, indicating Marc might be some idealized alter in Steven’s mind. He even said as much this week when finally confronted with the truth: He first emerged when Marc needed to escape into a happier childhood.

And boy, did he need that escape.

Playing on ideas from the comics, Marc’s first great “sin” was a failure to protect his brother, Randall (Claudio Fabian Contreras). In the comics, this idea played out throughout their lives in various ways – leading to Randall adopting supervillain identities to tussle with Moon Knight – but here it took on the form of one tragic moment: Marc was unable to save Randall from drowning when they went to play in a cave during a storm.

Compounding the tragedy, though, was the way Marc’s mother, Wendy (Fernanda Andrade), prevented him from sitting shiva for Randall. She directly and loudly blames him for his brother’s death. From memories Steven uncovered while he and Marc tried to balance their hearts (more on that later), it also becomes clear Wendy never recovered from that loss and continued to blame Marc for what happened. It also opened the way for Wendy to abuse Marc physically – a torment that, on top of relentless emotional battering, led directly to the formation of Steven. Marc even tells him that his purpose is to be the happier one with memories of a loving mother. 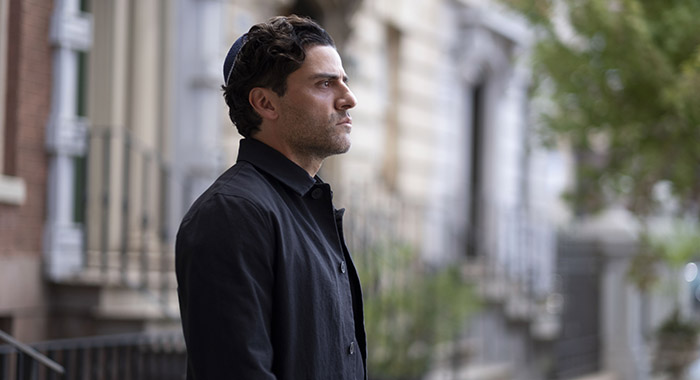 This revelation is key as it sets up Steven in a very different way from his comic book counterpart. The trauma Marc experienced in the comics is related to an antisemitic incident we still don’t want to spoil in case it eventually becomes part of this story in some way. And though there are indications that Marc was always destined to suffer from Dissociative Identity Disorder, Steven arrives in the comics as the very model of gentile success. Beyond being the innocent one, he is also a persona outside of the reasons Marc was hurt in the first place. Although never deeply investigated in the comics, the implication is clear.

And it might be a little too tough for Disney+, so a trauma centered on family takes its place and results in a Steven formed from Marc’s favorite movie and the adventures he took with Randall before that tragic day splintered everything.

But the division between Marc and Steven’s life started to break down with the death of Wendy and his decision not to attend her shiva. It answers a question we never really asked about their recent history – we always assumed the search for Ammit’s ushabti led to their increased involvement with one another – but it also leads to another we probably won’t get closure on anytime soon: How established a life did Steven really have in London?

We’re also going to assume Wendy’s death also coincided with Khonshu’s (F. Murray Abraham) interest in Layla (May Calamawy) as Marc’s replacement and his decision to leave her. Hopefully, we’ll get more clarity on that front during next week’s finale. 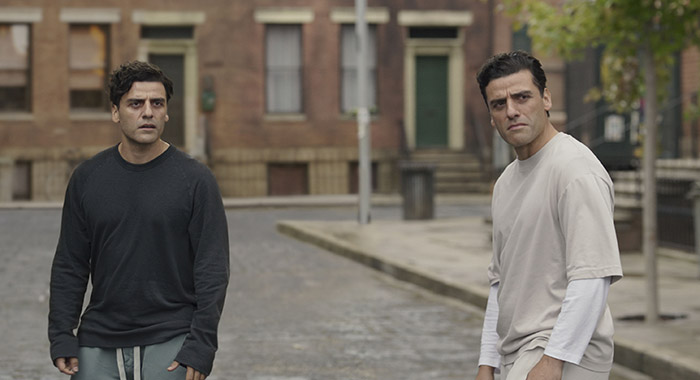 While the episode revolved around Steven learning the truth about himself and Marc’s past, it also introduced an interesting notion when Taweret (Antonia Salib) mentioned the path of the dead has been pretty empty in recent years with very few souls trying to reach the Field of Reeds. She also mentioned there are lots of places human souls can go when they die, indicating just about every religious concept of an afterlife is real in the Marvel Cinematic Universe.

While handy for the various sensibilities of Moon Knight viewers, it also introduces an interesting conflict into Marc himself. As mentioned above, the shiva for Randall (and the subsequent one for Wendy) makes it very clear that Marc is Jewish. Nevertheless, the reckoning he and Steven face by weighing their hearts against the feather of Maat is bound in the beliefs of ancient Egypt. 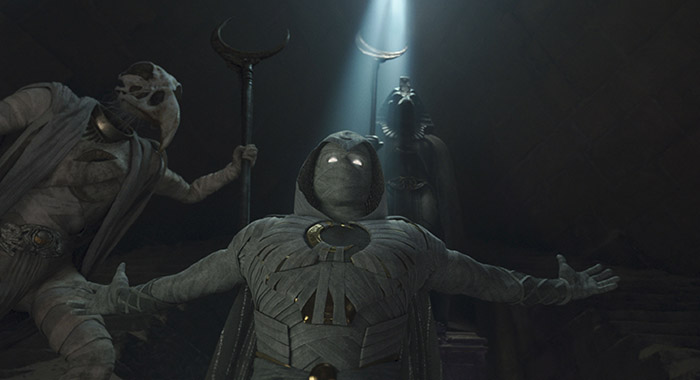 In pure story terms, submitting to this afterlife this is consistent with Marc’s pledge to Khonshu to be his fist. Literally becoming the servant of a god you did not grow up worshiping would naturally bind you to that faith – and afterlife – in a reality where all such gods exist, but as a television program viewers in our real world watch, it leaves a certain imprecision as it also has to skirt any position on the existence of an Abrahamic God. For simplicity’s sake, let’s just assume Marc has consciously rejected the God of his ancestors, there’s even a momentary visual cue to this that he immediately takes back after walking away from his father’s house, but it does represent an intriguing idea should anyone at Marvel Studios ever choose to directly confront it.

Meanwhile, the notion of dueling afterlives means there must be some form of Heaven, Hell, Nirvana, and Elysium out there in the various strands of dimensions, multiverses, and places in between. A handy idea for Marvel to set up while its fans continue to clamor for Mephisto’s debut. 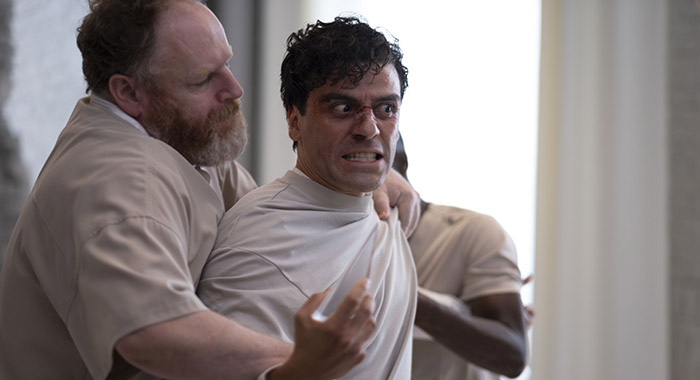 Although the third Moon Knight persona did not debut in this episode, there is still evidence to suggest he is around. A taxicab can be seen in both of the scenes featuring the streets in front of Marc’s childhood home; in fact, the cab crosses Steven’s path as he watches Marc switch into him following his refusal to sit shiva for his mother.

Another potential Jake sighting, after a fashion anyway, is Marc’s mention of going AWOL from the army while in a fugue state. It is easy to assume this was Steven taking over their body, it is also possible Jake took control for reasons of his own. Was he, ultimately, the reason Marc agreed to work with Bushman?

And while the balancing of their hearts seemed to revolve around Marc revealing everything to Steven (or even Steven’s sacrifice at the end of the episode), we still can’t help but think the missing element Taweret referred to is Jake. But at the same time, we’re willing to accept that Jake may not make an appearance until the stinger scene next week.

It is also possible that the second sarcophagus last week and the taxicabs this week are cases of misdirection. Beyond its supervillain plot, Moon Knight has been about Steven and Marc learning about each other and coming to grips with sharing a body. Jake may just be a persona too far for the scope of the series. Well, for this season, anyway.

All that said, Marc knowing Crawley (Shaun Scott) by name is a curious moment in the episode…

Steven Is Lost in the Duat 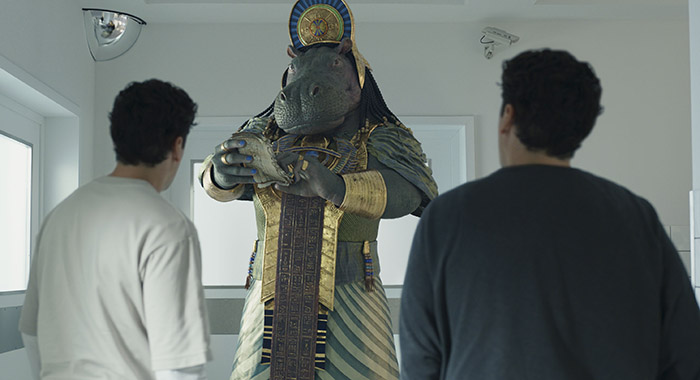 But just as Marc and Steven seemingly understand each other, Steven is lost to Marc and to viewers. The episode ends on a terrifying note: Steven frozen in the sands of the Duat. It sure look dire, particularly as Marc’s heart became balanced in that moment, but we don’t think all hope is gone for the character.

For one thing, Taweret’s barge arrives at Osiris’ gate just after Steven falls overboard. It is possible for the god to intervene and pluck him from the sands. As it happens, Ammit’s wrath also seems to be occurring back on Earth, and we doubt Osiris will appreciate being inundated by so many unjudged souls. He may be forced to align with Khonshu, Marc, and Steven just to stop her.

Also, it is worth considering that while Marc and Steven are seen to have separate hearts, they are parts of one whole and may not be divided just because Steven fell into the sand. Should Osiris appear, he may use that technicality to aid Steven before sending them back to Earth.

But that leads to one last question about this afterlife. Marc successfully made it to the Field of Reeds, a paradise of sorts where souls who successfully pass the scales can, essentially, farm forever in an ever-fertile and idealized Nile valley. Marc’s version of the field might be slightly different, but it is easy to imagine he may not want to go back having touched the eternal reward. Will it take a restored Steven to shake him out of that bliss? Will Jake need to appear to correct all of their shared mistakes? Or is it down to Layla pledging her own devotion to Khonshu to solve the problem of Moon Knight? Also, is it possible that Marc is still in that asylum?

Thankfully, we only have one more week to wait before we know for certain.