Anthony Mackie is on for Captain America 4, Emma Stone is on for Cruella 2, My Hero Academia is going live-action, and Gene Roddenberry gets a biopic.

This week’s Ketchup brings you more headlines from the world of film development news, covering such titles as Captain America 4, Cruella 2, Dune 2, and Free Guy 2.

IRONHEART TO DEBUT IN BLACK PANTHER: WAKANDA FOREVER BEFORE DISNEY+ 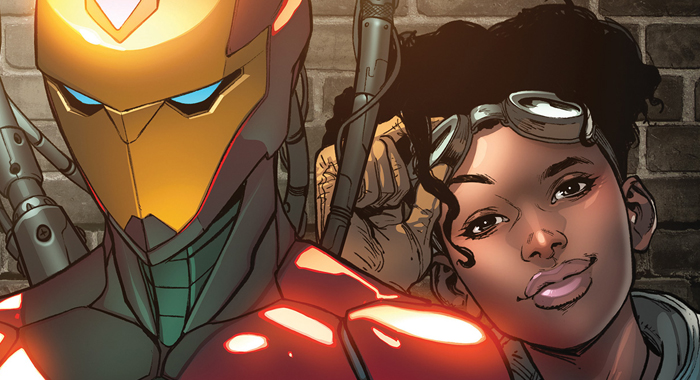 Disney’s investor day last December was jam-packed with announcements, and one of them was that the Marvel Comics armored superhero Ironheart would be getting her own show on Disney+, and that she will be played by Dominique Thorne, who previously co-starred in the Academy Award nominated films If Beale Street Could Talk (Certified Fresh at 95%) and Judas and the Black Messiah (Certified Fresh at 96%). Ironheart does not yet have a Disney+ release date, but given how many shows are already filming before Ironheart, it probably won’t be until 2023 or so. As it turns out, however, we won’t have to wait that long to see the character make her debut, as Thorne will first portray Ironheart in next summer’s Black Panther: Wakanda Forever (7/8/2022). It’s unclear how Ironheart will tie into Black Panther: Wakanda Forever, except one possibility is that in the comics, some young engineers have gone to Wakanda to continue their studies, which seems like a logical way to introduce Riri Williams, aka Ironheart, a 15-year-old M.I.T. student and engineering genius.

Sometimes, the big news of the week isn’t particularly “news” to anyone paying attention. For example, the Disney+ series The Falcon and the Winter Soldier ended with Anthony Mackie’s Falcon character officially taking on the role of Captain America, after a fair number of twists and turns along the way. So it was immediately obvious that Marvel and Disney planned on casting Mackie as the new Captain America in future projects, including Captain America 4, which the series’ showrunner was confirmed to be writing in April. Even so, Mackie wasn’t officially signed to star in the hypothetical Captain America 4 until this week, but the deal is now signed. We still don’t know when Captain America 4 might be released (except it likely will not be before 2024, because both 2022 and 2023 are already pretty well scheduled), or what it might specifically be about.

Wes Anderson is well-known for his star-studded ensemble comedies, such as this year’s The French Dispatch, and his next film, which is currently filming in Spain, seems like more of the same. Just last week, Margot Robbie signed on for Anderson’s new project, and Jason Schwartzman and Rupert Friend joined soon after. This week gave us two similar casting announcements, starting with Scarlett Johansson, who was then followed by Bryan Cranston, Hope Davis, Liev Schreiber, and Jeffrey Wright. Other previously announced stars include Adrien Brody, Tom Hanks, and Tilda Swinton. One interesting thing about Johansson signing on is that Wes Anderson’s films are usually distributed by Searchlight Pictures, which, as of 2019, is a subsidiary of Walt Disney Pictures, with whom Johansson is currently in the midst of a lawsuit over Black Widow profit participation.

3. DENIS VILLENEUVE CONFIRMS ZENDAYA WILL BE PROTAGONIST IN DUNE SEQUEL

When David Lynch directed the first film adaptation of Dune (Rotten at 50%) in 1984, there were edits that were over three hours long, and the director’s cut of the 2000 TV mini-series was almost five hours long. The reason is that Frank Herbert’s original novel (and its sequels) is particularly dense, with dozens of characters and any number of related subplots. Director Denis Villeneuve (Arrival, Blade Runner 2049) apparently knew this would be an issue all along, because the Dune movie we’re getting this year only adapts half the novel. Villeneuve confirmed this week that he is currently writing the sequel (if Warner Bros. decides to greenlight it), and that the running time will be 155 minutes. Villeneuve also clarified that the protagonist role in the Dune sequel will shift from Timothée Chalamet’s Paul Atreides to Zendaya’s Fremen character Chani. Dune is currently scheduled for release on October 9, 2021, pushed back from its original December, 2020 release because of the COVID-19 pandemic.

4. EMMA STONE IS INDEED SIGNING ON FOR DISNEY’s CRUELLA SEQUEL

Following the news of Scarlett Johansson’s lawsuit against Disney over her Black Widow compensation, there was some speculation that other recent Disney stars like Emma Stone (Cruella, Certified Fresh at 75%) might follow suit. That is now extremely unlikely to happen, as Stone has officially closed a deal with Disney to star in a Cruella sequel. Although many details of the deal haven’t been disclosed (which isn’t unusual at all), Stone is expected to be earning a sum in the low eight figures, which is more than the $8 million she earned for Cruella. It’s also unclear how profit participation (a key dispute in the Black Widow lawsuit) and streaming figure into Stone’s new deal. The Cruella sequel will be directed by Craig Gillespie from a screenplay by Tony McNamara, both of whom also worked on the first Cruella.

Whether blamed on the Delta variant or on streaming options, the movies of the summer of 2021 have regularly opened to disappointing box office. One of the exceptions to this trend was last week’s Free Guy (Certified Fresh at 82%), which exceeded predictions of a $15-$20 million domestic opening with a haul in the $28 million range. Ryan Reynolds took to his Twitter account on Saturday, the day after Free Guy opened, to post that “Disney confirmed today they officially want a sequel. Woo hoo!! #irony.” It’s worth mentioning that Free Guy actually didn’t get its start as a “Disney movie,” as it was one of the final productions of the former 21st Century Fox before Disney acquired Fox in 2019 (which is why Free Guy isn’t on Disney+ yet).

Crazy Rich Asians director Jon M. Chu, whose latest film was the big-screen adaptation of Lin-Manuel Miranda’s Broadway musical In the Heights (Certified Fresh at 95%), has a very busy slate of upcoming projects in development, including the two planned Crazy Rich Asians sequels, the Wicked movie, and Disney’s live action Lilo & Stitch remake. Chu added another project to his schedule this week, as he is attached to direct an adaptation of the 2018 GQ article The Great Chinese Art Heist (which you can read right here), about how great works of Chinese art kept getting stolen from museums around the world. Silicon Valley co-star Jimmy O. Yang will co-write and co-produce along with his Crab Club production company partners.

7. BIOPIC OF STAR TREK CREATOR GENE RODDENBERRY IN THE WORKS

Nicole Kidman, Javier Bardem, and director Aaron Sorkin recently wrapped production on the Amazon Studios biopic Being the Ricardos, about the lives of Lucille Ball and Desi Arnaz, and one has to imagine that the film will address their contribution to science fiction as the co-producers of the original Star Trek. If that whets audiences’ appetites for more back story about the creation of the seminal television series, then the newly announced Gene Roddenberry biopic should go a long way to filling in those details. The film was announced on August 19, 2021, which would have been Gene Roddenberry’s 100th birthday. The as-yet-untitled biopic already has a screenplay by Adam Mazer, who wrote the Jack Kevorkian movie You Don’t Know Jack (Certified Fresh at 83%) and co-wrote the espionage drama Breach (Certified Fresh at 84%).

My Hero Academia, a Japanese superhero franchise set in a reality where most people have superpowers, got its start as a manga series in 2014 that was then adapted as an anime series starting in 2016 — in the US, you can catch it on Adult Swim. Legendary Entertainment, which is the same company that gave us both Pacific Rim and the recent Godzilla franchise, is now developing an English-language live-action My Hero Academia feature film, and the directing job is going to Japan’s Shinsuke Sato, who also adapted the manga-based movies Bleach (Fresh at 71%) and Inuyashiki (Fresh at 100%). My Hero Academia will also be Shinsuke Sato’s first English-language feature film.

Not counting any future spinoffs that might still happen someday, the main Fast and Furious franchise is set to have just two more movies, and now we have an idea about when the penultimate movie will come out. Fast and Furious 10 will start filming in January, 2022 for a release on April 7, 2023. There is no release date for the final film, Fast and Furious 11, yet, but it will be filmed back-to-back with F10, so a release date in 2023 is probably most likely. Franchise mainstays like Vin Diesel, Jordana Brewster, Ludacris, and Michelle Rodriguez are all expected to return for the last two films, but it’s not yet known if more recent additions like John Cena and Charlize Theron will also return. Other movies currently scheduled for around the same time include Dungeons & Dragons (3/3/2023) (which recently wrapped filming), the prequel Wonka (3/17/2023) starring Timothée Chalamet, and Guardians of the Galaxy Vol. 3 (5/5/2023).