What the first episode of new Marvel show Loki tells us about its place in the MCU, the multiverse (of madness or otherwise), and the character's potential here and beyond.

After being one of the earliest Marvel Studios Television shows to be confirmed, Loki is finally here. With it, some questions about the Marvel Cinematic Universe have been answered, but perhaps more importantly, Loki Laufeyson (Tom Hiddleston) has a new lease on life and a new perspective. Although, it remains to be seen if the setting of the series or Loki’s actions will prove more important in the long run. And though the first episode may have revelled in the sort of “talkie-talkie” the God of Mischief enjoys, there is still plenty to discuss about the series debut. So let’s dive into the premiere and see what we can glean from Loki’s opening hour, “Glorious Purpose.”

Spoiler Alert: The following reveals details of the second episode of Loki season 1. Stop here if you have not watched “Glorious Purpose.” 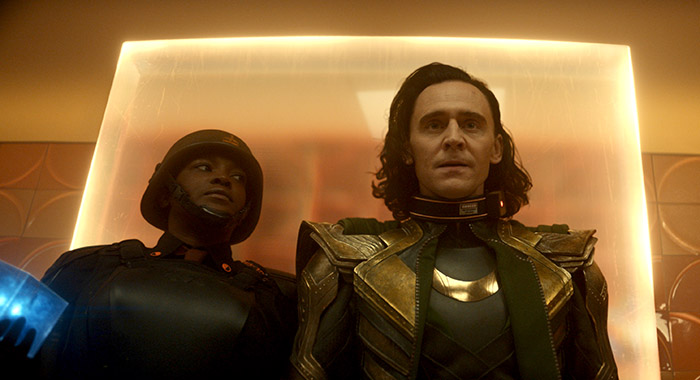 Considering all the pain unleashed during the Infinity Saga, it is interesting to see this variant Loki discover the Infinity Stones are no more than paperweights in the realm of the Time Variance Authority. It puts our recent tracking of the Stones in a different light as the Time-Keepers clearly molded the search for them in a very specific way. And, yeah, we have reached the point where it probably is time to joke about them and, at least in a meta-narrative sense, de-power them. But that speaks to an interesting set-up for the TVA as a function of the MCU and the real conflict playing out in Loki.

As explained in the episode, the TVA grew out of a multiversal war that saw the Time-Keepers emerge and reshape it into a single, “sacred” timeline. That explanation suggests the sort of parallel worlds seen in the DC Multiverse do not exist here. Instead, there are divergent timelines the TVA prune and reset before they can become proper alternate worlds.

The quashing of timeline-branching is interesting because of a philosophical element inherent to the very concept of multiverses: they prove the existence of free will. If choice is more than an illusion, then every consequence of that choice must exist outside the perception of the one making the choice. The simplest example: A driver turning right ends up in a crash, while the same driver turning left arrives at work on time. The notion that both outcomes exist simultaneously is a key part of real quantum theory and an element of the multiverse concept well before DC or Marvel incorporated the idea into their storytelling.

But within the confines of Loki, we discover another wrinkle: The Avengers were always meant to go on the Time Heist, while Loki’s escape from Stark Tower is an aberration to the Sacred Timeline. This suggests free will, at least in the MCU, is an illusion. Three all-powerful “space lizards” dictate the proper flow of time and the choices we’ve seen play out in the Marvel movies (and the two Disney+ series thus far) were predetermined long before Tony Stark (Robert Downey Jr.) built the Mark I Iron Man suit in a cave using scraps.

Also, there is an interesting meta-narrative going on here as Marvel Studios president Kevin Feige, head writer Michael Waldron, and director Kate Herron effectively act as the Time-Keepers of this series. Truly, Loki’s actions are not his own.

Loki Confronts the Lie of Freedom

Our current understanding of the TVA puts Loki’s journey in a new light. His stated ambition to rule was always to order people away from what calls the “lie of freedom.” Sure, there are also the sore feelings he carries around for Odin (Anthony Hopkins) and Thor (Chris Hemsworth), but the family squabble underscores the way Loki wanted to organize the universe into a realm under his direction.

Curious, then, that a variant of Loki would learn that ambition was never really his and that his life was carefully curated by space lizards to be a villain. One thing actors who play villains always note is that the characters never see themselves as the bad guy. So Loki actually learning he is a villain is a revolutionary moment for the MCU. The antagonists generally have a seemingly reasonable purpose to their actions; whether that be Ego’s (Kurt Russell) basic need to procreate or Thanos’ (Josh Brolin) grim calculus. But for Loki, his mischief no longer serves the burden of glorious purpose he perceived in his life. He is finally exposed to the truth that he is the bad guy.

Granted, Loki is such a scamp that we never want to see him reduced to so simple a thing, so the series will likely disprove the determination of the Time-Keepers.

Also, Loki fighting against (or giving into) his nature will likely be an ongoing internal conflict for the character. Released from the timeline and unburdened by his purpose, will he attempt to gain control of the TVA or will he be transformed by the experiences he will face? While the Loki of the prime timeline proved to have heroic qualities, will this variant find his way to the same path? Maybe witnessing a truly villainous Loki Laufeyson will push him in that direction.

A Variant Darkly: Loki Has Endless Potential — For Now Anyway

Although Marvel Studios often mentioned the series would feature Loki chasing himself, actually hearing Mobius M. Mobius (Owen Wilson) say Loki is the variant he needs Loki’s help to stop tilts everything we presumed about the show.

For one thing, we always assumed Loki would cause some chaos with the Tesseract before the TVA caught up with him and forced him to undo his mischief. Now, we see there’s a much more dangerous Loki variant running around capable of actually hurting TVA agents. The first question we have to ask about this variant is fairly obvious: From when in the Sacred Timeline did they spring? There are a handful of tantalizing moments in history to consider. One option, this is the Loki who grew up in Jotunheim under the tutelage of his true father, Laufey. Another option: This Loki successfully collected the Infinity Stones for himself and upended all of space of time. It is also possible the dangerous Loki variant is from the multiversal war; predating the Time-Keepers could explain why the variant presents a real threat to the TVA.

Then there’s the motive to consider. We’re told that at each of the attacks, the dangerous variant steals the reset charges. From what we’ve so far, these charges undo any effects of a breach to the timeline; the French child forgets meeting Mobius and the Kablooie candy the dangerous variant gave him, for example. If Loki is collecting charges, are they looking to reset something on a colossal scale?

If the variant is from that multiversal war, they might be looking to undo the TVA entirely and, as Miss Minutes (Tara Strong) put it, return to the Multiverse of Madness. Also, we couldn’t help but notice those words were in close proximity during her presentation or the fact Waldron rewrote Doctor Strange in the Multiverse of Madness for director Sam Raimi. The connection must be ordained by the Time-Keepers of our reality. That, or the reference to the upcoming film is just a joke. Loki is a funny show after all.

Read Also: “Marvel’s Kevin Feige on The Falcon and The Winter Soldier, WandaVision, and Which MCU Shows Could Get Second Seasons“

The Coulson Question: Was He Revived in the MCU? 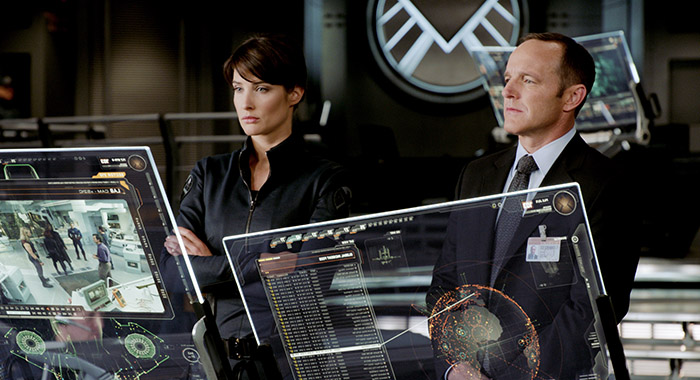 The prominent appearance of Phil Coulson (Clark Gregg, pictured) in Mobius’s recap of Loki’s life once again puts the question of the agent’s survival in play. To recap: When he was killed in The Avengers, plans for the Marvel’s Agents of S.H.I.E.L.D. television series were already underway. Though Coulson was meant to be the person the team was literally avenging, his future was ordained.

Initially, the series was meant to be connected to the movies —just like the Disney+ series are now — and that seemed to be the case through the program’s second season; Coulson even gives Maria Hill (Cobie Smulders, also pictured) the location of the Hydra base in Sokovia, and the information sets off the events of Avengers: Age of Ultron. Despite the connection, the Avengers never learned that Coulson was alive. Eventually, the series’ pilot director suggested it took place in an alternate timeline where Coulson was revived, while the films continued on in a reality where he died. And, ultimately, real-world considerations pushed the series and the movies further apart to the point where its final two seasons simply cannot be canon. 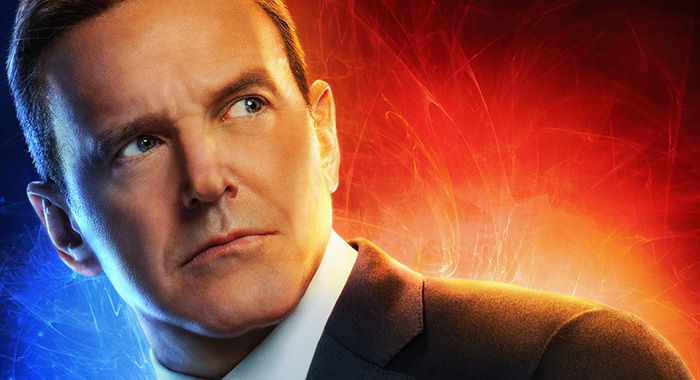 So was Phil Coulson revived in the MCU? That ambiguity plays nicely into Loki‘s themes and a concept like the TVA could offer S.H.I.E.L.D. some form of canonicity — if even just to declare the entire series part of an divergent timeline. But there is also a broader S.H.I.E.L.D. question to consider, as WandaVision head writer Jac Schaeffer avoided any comment on the organization’s status, and The Falcon and the Winter Soldier made a mention of Sharon Carter’s (Emily VanCamp) “old division” starting up again. If S.H.I.E.L.D. re-emerges in, say, Secret Invasion, Marvel Studios needs to make a definite choice about Agents of S.H.I.E.L.D. and its stories.

Also, Loki discovering he couldn’t even kill Phil Coulson would be another great way to deflate his glorious purpose. Or, perhaps, it is the pivotal event the dangerous variant is trying to reset. But time will tell if any of these conjectures prove to be the case. Time always tells, after all.