The Sopranos gets a prequel, Netflix bets on Keanu, Elizabeth Banks and James Gunn reunite, and remakes for Logan's Run and The Crow move forward.

Today’s Ketchup brings you ten headlines from the world of film development news, covering titles such as The Joker, the Sopranos prequel, and remakes of The Crow and Logan’s Run. 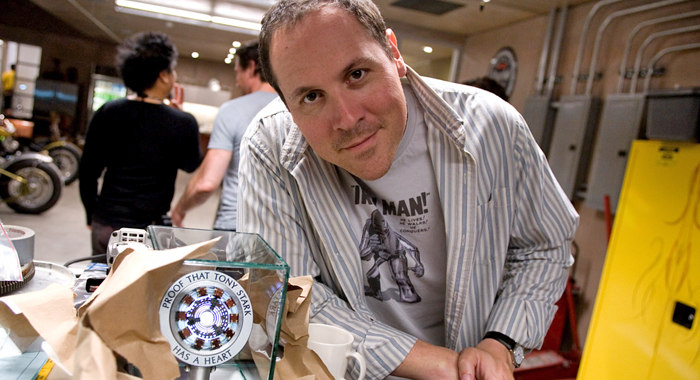 Last August, Disney announced plans to launch their own streaming app in 2019 that would feature both their existing catalog and new, original programming (including from their subsidiaries like Marvel). Since then, we’ve heard that this streaming service will be the new destination of formerly theatrical projects like the live-action remakes of Lady and the Tramp and The Sword in the Stone, and that Netflix will no longer be debuting any new Marvel shows. Now, we have confirmation that the not-yet-named Disney streaming service will be getting a live-action Star Wars series, and Jon Favreau, whose filmography as director includes Iron Man, The Jungle Book, and next year’s The Lion King, will executive produce and write it. That’s about all we know right now, but just Favreau’s name alone has already inspired plenty of online reactions. The other big Star Wars news this week was composer John Williams’ announcement that next year’s not-yet-titled Star Wars Episode IX (12/20/19) will be his last as composer. (Rogue One: A Star Wars Story was scored by Michael Giacchino, and frequent animation composer John Powell worked on Solo: A Star Wars Story.)

1. THE SOPRANOS IS GETTING A PREQUEL MOVIE

There may never be a firm definition of exactly when today’s “New Golden Age of Television” began, but several of the early groundbreaking shows that arguably paved the way were on HBO in the early 2000s. In addition to The Wire, Deadwood, Six Feet Under, and Curb Your Enthusiasm, HBO’s most applauded series during that time was the suburban crime drama The Sopranos (1999-2007). There had been rumors at the time about a possible Sopranos movie (here’s the late James Gandolfini being asked about it by TMZ), but over ten years later, it seemed unlikely. David Chase has now, however, sold a screenplay to New Line Cinema called The Many Saints of Newark, which is being described as a prequel feature film for The Sopranos. The title refers to the 1967 Newark riots, as the film will focus on “a time when the African-Americans and the Italians of Newark were at each other’s throats, and amongst the gangsters of each group, those conflicts became especially lethal.” Since 1967 was some 30+ years before The Sopranos started, any characters from the show will have to be recast by (much) younger actors (Tony Soprano would have been about 5 or 6 at the time).

As noted in the Top Story above, Netflix won’t be getting the rights to any additional Marvel shows (other than the ones they already have, like this week’s Jessica Jones S2). On the other hand, those Marvel shows have been very lucrative successes for Netflix, so unsurprisingly, Netflix is looking for new superhero sources. This week, the streaming giant inked a deal with Deadpool creator Rob Liefeld for a series of connected movies that will be based on his Extreme Comics characters. They’re not as famous as Deadpool or Cable, but Liefeld’s Extreme Studios characters and titles include Bloodstrike, Bloodwulf, Re-Gex, and Kaboom. Netflix is also now teaming up with Anthony and Joe Russo, the directors of Marvel’s Captain America: The Winter Soldier, Captain America: Civil War, and Avengers: Infinity War, for a project they’re producing called Past Midnight. No deal has been finalized yet, but the Russos hope to convince Keanu Reeves to star in Past Midnight, which is mysteriously described as “a new type of vigilante superhero story.” Past Midnight will be directed by Rick Famuyiwa (Dope), who was previously working on The Flash for Warner Bros.

Director Edgar Wright’s Baby Driver was hailed by some writers — sometimes literally — as a new kind of musical, and now Wright’s female lead in that film, Lily James, has already signed on for another (untitled) musical. Danny Boyle obviously used music heavily in his two Trainspotting movies, but the closest he’s gotten to directing a musical so far was 2008’s Slumdog Millionaire, which ended in a big Bollywood-style dance routine. The premise of Boyle’s untitled musical isn’t yet known, except that it’s set in the 1960s or 1970s, and that James will be playing a teacher. Between Baby Driver and this musical, Lily James will also play the young Meryl Streep in this summer’s sequel Mamma Mia! Here We Go Again (7/20/18).

A lot of major movie stars made early appearances in horror movies, including Johnny Depp (A Nightmare on Elm Street), Jennifer Lawrence (House at the End of the Street), and Charlize Theron (Children of the Corn III: Urban Harvest). Before Pitch Perfect, and before she played Rita Repulsa in Power Rangers, Elizabeth Banks starred in 2006’s Slither, directed by James Gunn (way, way before Guardians of the Galaxy). Banks will reunite with Gunn (as producer) for a new horror movie to be directed by David Yarovesky (The Hive), though the premise and title of the project are not yet known. Banks also recently wrapped The Happytime Murders, co-starring Melissa McCarthy, which sort of does for Muppet-type characters what Who Framed Roger Rabbit did for cartoons.

When the news first broke last summer that Martin Scorsese (Casino, Goodfellas) was producing a Joker origin story movie for Warner Bros and DC Comics, the easy guess would’ve been that the connection was through organized crime. This week, however, a very simple premise (less than a sentence) was revealed, and it all makes sense. In this iteration, which will be directed by Todd Phillips (The Hangover, War Dogs), The Joker will be “a failed 1980s comedian who becomes the clown prince of crime after bombing with audiences,” which is (somewhat) similar to the premise of Scorsese’s 1982 film The King of Comedy, in which Robert De Niro’s failed comedian kidnaps a famous talk show host played by Jerry Lewis. This logline also connects the story to Alan Moore’s popular graphic novel Batman: The Killing Joke, in which the Joker also gets his start as a flailing stand-up comedian. Joaquin Phoenix remains attached to star in this Joker origin story, but there’s no release date yet.

ROTTEN IDEAs OF THE WEEK

4. THIS WEEK IN REMAKES PART I: LOGAN’S RUN TO GET HUNGER GAMES-STYLE REBOOT

If you ever read some of these film development stories and think, “Isn’t that a little bit too on the nose?,” it’s possible you don’t think like a studio executive. Warner Bros’ reaction to the rise of the “dystopian young adult novel” (The Hunger Games, Divergence, Maze Runner) over the last several years has apparently been to develop a reboot of a movie that did all that stuff back in the 1970s. 1976’s Logan’s Run was set in a future where all of society’s problems are seemingly solved by executing every person as soon as they turn 30 years old. As this piece puts it, the premise of the film is basically, ““Hey, I think I might want to do things after I turn 30 rather than engage in ritual suicide.” The idea of a Logan’s Run reboot has been kicking around for several years (including a time when it would have been directed by Bryan Singer), but it’s back again. To that end, Warner Bros has hired screenwriter Peter Craig, who co-wrote the two halves of The Hunger Games: Mockingjay, to tackle the project. For obvious reasons.

Hollywood may one day run out of viable 1980s movies to remake, but the 1990s are just as ripe with potential (IT was, for example, a 1990s remake). Nostalgia for the latter decade may also be prime for mining as the “millennial” generation reaches its 30s and starts to get misty-eyed for the years when Mark Wahlberg and Reese Witherspoon weren’t the big stars they are now. In 1996, a pre-Pleasantville Witherspoon starred alongside then-rapper and sporadic underwear model Wahlberg in the thriller Fear (Rotten at 39%). Universal is now developing a remake of that film, which “will be told from a female perspective” — sort of a weird thing to note, considering the original film was also told from a female perspective.

2. THIS WEEK IN REMAKES PART III: JASON MOMOA’S THE CROW REBOOT SCHEDULED FOR 2019

When the indie comic book adaptation The Crow came out in 1994, it was the epitome of 1990s goth/industrial cool, and it arguably inspired much of the rest of what superhero movies would look like in the 1990s (Blade, Spawn, etc). We’ve been hearing since 2008 about plans for a reboot of The Crow, but no movie has come out of it, even as a series of potential stars — like James McAvoy, Luke Evans, and Nicholas Hoult — have come and gone. In 2016, reboot chatter sprung up again when Jason Momoa (Aquaman) announced his involvement, and now Sony Pictures has finally announced a release date. The Crow is now scheduled for October 11, 2019, which puts it directly up against two other similarly spooky adaptations: the animated reboot of The Addams Family, and the spooky Nickelodeon series adaptation Are You Afraid of the Dark?

There’s no denying that Tyler Perry has established himself as a reliable perennial box office sensation, but he’s also built up his movie franchise despite almost always earning Rotten Tomatometer scores. As a result, we report news about Tyler Perry as “Rotten Ideas” even when they involve people who might otherwise earn “Fresh” scores for other projects. Comic actress Tiffany Haddish, for example, is coming off her big comedy hit last summer, Girls Trip (Certified Fresh at 90%) — and a funny bit with Maya Rudolph at Sunday’s Academy Awards. Unfortunately, Tyler Perry’s Rotten streak might just be > Tiffany Haddish, who has signed to star in Tyler Perry’s The List, a “catfishing” romantic comedy to be released on November 2, 2018. Perry and Haddish have some pretty strong competition on that date, as they’re currently up against X-Men: Dark Phoenix, Disney’s live action adaptation of The Nutcracker and the Four Realms, and the historical epic Mary Queen of Scots (starring Margot Robbie and Saoirse Ronan).