For The Mandalorian creator Jon Favreau, the upcoming Disney+ series is a chance to take Star Wars back to its roots.

“As somebody who grew up with Star Wars and really having been formed around what I experienced when I was little with the first film, there is some aesthetic to it that I really gravitate to,” he told Rotten Tomatoes and a group of reporters at a recent press day for the series, which stars Pedro Pascal as the mysterious new bounty hunter, Gina Carano as ex-Rebel Cara Dune, and Carl Weathers as bounty hunter guild boss Greef Carga.

“My whole taste in movies was probably formed in a big way from seeing George Lucas’s original film,” Favreau continued.

The original Star Wars film was an extraordinary mix of Lucas’ own interests in mythology, Westerns, samurai movies from Japan, and the science fiction and adventure serials of the 1930s and ’40s. The low-budget productions presented a serialized story told in half-hour segments across as many as 26 weeks and featured comic book heroes like Flash Gordon and Superman, and some homegrown characters Commander Cody. When Lucas’ attempt to make a Flash Gordon film was stymied, he developed Star Wars instead, integrating the notion of those weekly serials into his films. 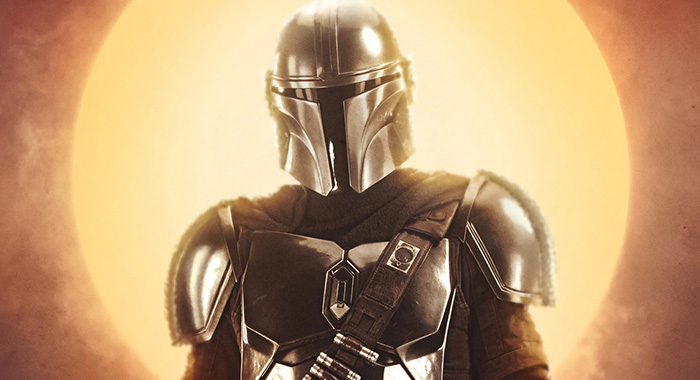 Favreau would eventually take his childhood love of Star Wars into a passion for filmmaking and the same film genres Lucas himself enjoyed, including the serials. That long established link between Star Wars and serials made a weekly television series an appealing project.

“[It] opens us up to this novelization of story, and a return back to the roots of the Saturday afternoon serial films that my parents’ generation grew up with — with cliffhangers [and] adventure,” he said. “The novelization of a serialized storyline, to me, that’s where it really opened up a lot of freedom and opportunity where we don’t feel that we’re repeating or copying anything else that people have experienced with Star Wars.”

Set five or so years after the events of Return of the Jedi, the series begins its tale in a part of the galaxy struggling from the economic upheaval of the Galactic Civil War. Pascal’s nameless bounty hunter in Mandalorian armor is the best of Carga’s hunters, but the bounties he collects barely pay the fuel bill. When the two discuss the problem, Carga offers the Mandalorian an unorthodox bounty backed by an Imperial remnant which, presumably, sets him on new course. The character, as seen in special 26-minute press preview, is man of few words ready to do whatever he must to find his mark. 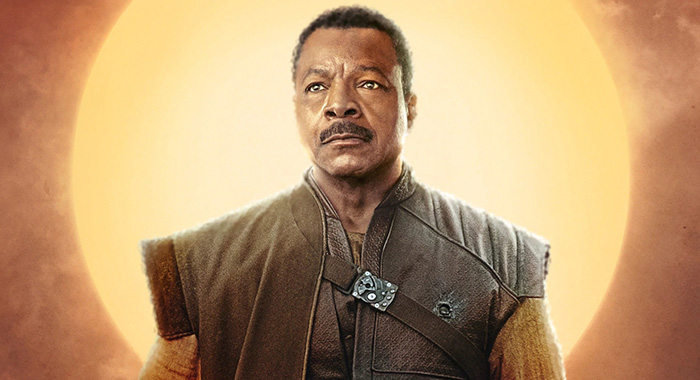 To Pascal, donning the costume was like returning to the days of playing with Star Wars toys writ large. The actor said putting on the helmet for the first time gave him the jolt that it was all becoming real.

“You can’t see very well through the helmet,” he joked. “But I got a pretty clear impression [of what I looked like].”

The visual language of The Mandalorian is inherently Star Wars, but borrows a great deal from the earliest concept drawings for both the original film and The Empire Strikes Back. The title character, with his poncho and symmetrical armor design, evokes much of Ralph McQuarrie and Joe Johnston’s initial concept for Boba Fett. But beyond the very specific use of that earlier Mandalorian design — and elements of Fett’s initial “Man with No Name” demeanor — the series itself utilizes the aesthetics and color schemes of McQuarrie’s concept art from the original films in a way so startling that long-time fans will be convinced some his work has come to life.

According to Favreau, utilizing unrealized ideas from the Original Trilogy allowed the show to have a visual continuity with Star Wars even if The Mandalorian features all new characters.

“It reminded me of when we were starting with Iron Man. So for new fans, these were new characters, new actors, and a new world,” he explained. “But by the same token, the foundation of all of genre are the fans that have been there since the beginning … how do you balance those two things at the same time?” 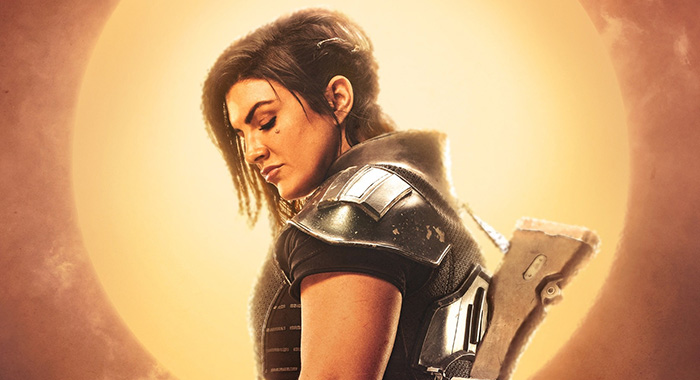 The answer stemmed from layering in obvious visual callbacks — the Imperial Stormtrooper armor, arid landscapes, etc. — while building up characters who make films like Iron Man and shows like The Mandalorian “approachable and accessible.”

At the same time, the Mandalorian’s pulse rifle is a constant, and obvious references to the justly maligned Star Wars Holiday Special are a big nod to diehard Star Wars fans who appreciate Boba Fett’s first appearance in the special’s animated segment. Favreau added the rifle, in part because he wanted to see the prop realized by the program’s talented prop department, but he added Easter eggs like the rifle and “big movements in the story” that have the potential to “reflect storylines in either the Legends [continuity] or in [the official] canon.”

In fact, The Mandalorian opens with another element of the Holiday Special making its way into canon. If this means there is room once again for Kyle Katarn (hero of the Jedi Knight video games), Mara Jade (the popular adversary and later wife of Luke Skywalker in the novels), or Jodo Kast (a man masquerading as Boba Fett in the 1990s Dark Horse comics) in the main Star Wars continuity remains to be seen.

The use of these seemingly discard Star Wars ideas — and the artwork generated from them for The Mandalorian — impressed Weathers when he first talked to Favreau about playing a part in The Mandalorian.

“You walk into that room, and all this art is on the walls, and [Jon] is so passionate about it all,” Weathers said. “It’s all magnificent. It is some of the most beautiful artwork you could ever see. If you were to come back to it, you want to go through and pick pieces off the wall because it’s that beautiful.”

Added Favreau: “We worked him in a lot into the show more than he agreed to, and now in season 2, [Carl is] a part of our directors brigade.” 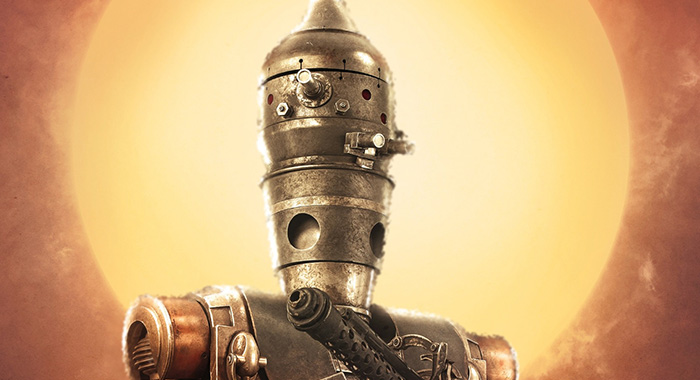 Getting a special group of directors together was important for Favreau from the get-go. Directors for the first season include Taika Waititi — who also voices assassin droid IG-11 — Bryce Dallas Howard, and Rick Famuyiwa.

“This is where you’re going to see a lot of people that are working in this incubator of story and technology,” Favreau said. “[It’s] people who got together because they love Star Wars.”

But the most exciting inclusion in the first season’s director brigade for long time fans is Star Wars: The Clone Wars and Star Wars Rebels creator Dave Filoni. After steering the Star Wars animated ship for the last decade or so, he makes his live action debut with The Mandalorian’s debut episode. And without giving too much away, we can say the material feels like Filoni work.

“I treated it as boot camp for me to learn this type of filmmaking. I was on set every day, the whole season. And so I’ve learned [by] watching every single one of our directors,” Filoni said, adding that watching the “great cast” and crew behind the scenes was also an education.

As an animation director, he already knew the key elements of visual storytelling, but he admitted at least one practical element of live action filmmaking eluded him until working on The Mandalorian.

“I didn’t really have to worry [if] the sun is going down [in animation],” Filoni said. Despite losing complete control of lighting situations on the show’s gorgeous locations, Filoni said he enjoyed the “concrete nature” of shooting live action.

“It’s incredibly spontaneous. It’s going to happen right there, in the moment, and then that’s it,” he explained. “[In animation,] I can tweak a tiny eyebrow or a tiny smirk [of a character] … just a little bit of push in a direction will dramatically change the character.”

But, he admitted, capturing that moment in live action is “the real magic” of putting actors in front of a camera. 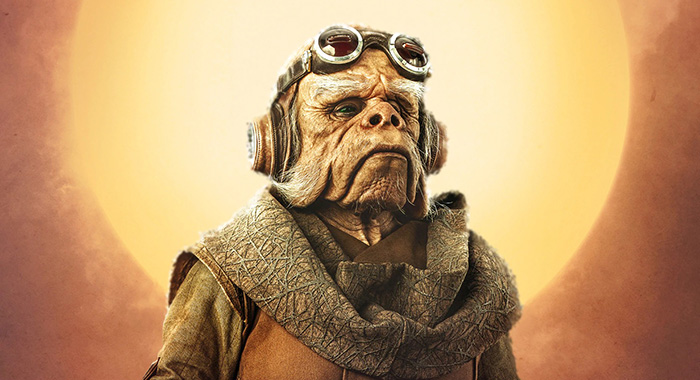 At the same time, Favreau admitted he often feels like the apprentice while working with Filoni and his extensive first-hand knowledge of Star Wars lore.

“We’ve really deliberated over [the story], and discussed it, and talked it through,” Favreau said.

But that was as much as he was willing to tease about the overall arc of the series as he also learned from Filoni the art of deflecting direct questions like, “Is Ahsoka Tano going to be in the show?” For the record: we don’t know. Filoni has been avoiding questions about that character’s whereabouts for years.

Those questions come from the excitement episodic television can generate. It is a mode of storytelling Favreau said lends itself really well to the series. And while those questions certainly happen with Star Wars films, The Mandalorian can address them in a different way because, as Favreau noted, the show will return each week with another episode.

From what we’ve seen, the Mandalorian’s latest bounty will definitely lead to a lot of questions, especially as it appears to send him into conflict with the Imperials who hired him. The material screened during the press day also saw the character speeding to various planets, meeting a creature more than eager to help him, and facing his seeming weakness: large animals.

It all feels very Star Wars. Or, as Favreau put it, “living your dreams” of Star Wars toys come to life.

The Mandalorian launches November 12 on Disney+.