Henry Cavill on Why He Had To Play the Witcher

Monsters, magic, and more! Cavill, his costars Anya Chalotra and Freya Allan, and showrunner Lauren Schmidt Hissrich explain what you need to know about The Witcher before you watch

The cast and showrunner of new Netflix fantasy series give us the lowdown on what you need to know about The Witcher before you watch. Monsters — check! White-haired monster hunter — check! Magic — check! Star Henry Cavill talks about being a fan of the critically-acclaimed video game series, while his costars Anya Chalotra and Freya Allan explain how their characters Yennifer and Ciri develop their relationships with Cavill’s Geralt of Rivia, and showrunner showrunner Lauren Schmidt Hissrich gives an insider’s look at the highly anticipated Netflix series.

Critics Consensus: The world of The Witcher still only feels half-formed as it gallops onto screens, but Henry Cavill brings brawny charisma to a series teeming with subversive fantasy elements and dark humor.

About the series: Witcher Geralt, a mutated monster hunter, struggles to find his place in a world where people often prove more wicked than beasts.

The Witcher is in now streaming on Netflix. 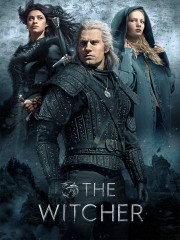