This week’s Ketchup brings you more headlines from the world of film development news, covering such titles as Ancient Aliens, Indiana Jones 5, Peeps, and Saw X. 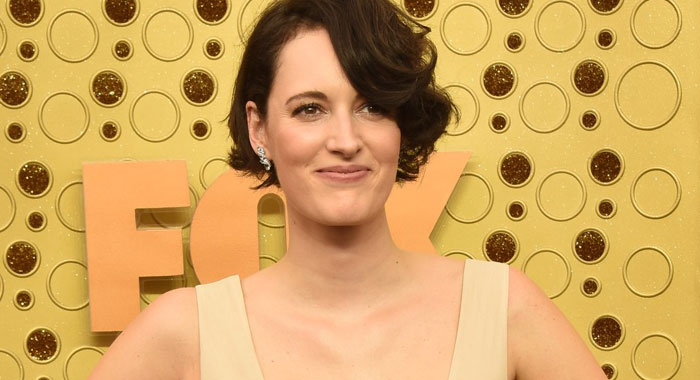 It appears that Phoebe Waller-Bridge may not be reprising her role as the star and writer of Amazon’s Fleabag beyond its first two seasons any time soon (or ever), but we will definitely see her in other high-profile projects. In addition to co-writing Daniel Craig’s last James Bond film, No Time to Die (and voicing L3-37 in Solo: A Star Wars Story), Waller-Bridge will co-star with Donald Glover in Amazon Studios’ upcoming reboot of Mr. + Mrs. Smith.  This week, however, she landed what might be her highest profile project ever, as she will be joining Harrison Ford as what is apparently the female lead in the not-yet-titled fifth Indiana Jones (7/29/2022) movie. Although Steven Spielberg was at one point expected to direct, he will be shepherding the film as producer instead, with James Mangold (Logan, The Wolverine, Ford v Ferrari) directing the sequel instead. Harrison Ford will turn 80 years old on July 13, 2022, 16 days before the current release date for Indiana Jones 5. Lucasfilm has not yet revealed any details about the premise or setting of the movie, but based on Ford’s age, one could guess that it might sometime in the 1970s or even the 1980s. We also learned this week that composer John Williams will be returning to give the classic Indiana Jones theme an update. Finally, in related news, the project that Steven Spielberg will be working on this summer instead of directing Indiana Jones 5 will be his untitled drama based on his youth in Arizona, and the latest star Spielberg has cast is Paul Dano, who will be playing the fictionalized version of Spielberg’s father. Dano joins the already cast Michelle Williams as Spielberg’s mother and Seth Rogen as Spielberg’s favorite uncle.

1. OLIVIA COLMAN TO CELEBRATE THE MOVIES IN EMPIRE OF LIGHT

You would think, for as many movies there are about filmmaking, there would be more than just a few films that are actually about movie theaters (examples include The Majestic, Cinema Paradiso, Matinee, and partially, Inglourious Basterds). Director Sam Mendes (American Beauty, Skyfall) appears determined to increase that tally by one as he has written (in what will mark his first credit as a film’s screenwriter) and will direct a romantic drama called Empire of Light, set at a movie theater in England in the 1980s. Olivia Colman will star in Empire of Light in an unspecified role, and the Searchlight Pictures film will be shot by Mendes’ frequent cinematographer, Roger Deakins (Revolutionary Road, Blade Runner 2049, 1918), when filming starts on location later this fall.

Over the last year or two, as big studios launched their own streaming services, just a few major distributors remain that didn’t follow suit (namely Sony, MGM, and Lionsgate), not counting pay TV providers like Starz (which is owned by Lionsgate, and with which Sony has had a deal since 2006). We now know why Sony never announced their own streaming service, as the studio has instead signed an exclusive five-year licensing deal with Netflix that will begin in 2022 and will include such upcoming Sony movies as Marvel’s Morbius, Spider-Man: Into the Spider-Verse 2, and the video game adaptation Uncharted. This deal basically positions Netflix as the main streamer that will have Marvel movies other than Disney+, as Sony will continue to have their own slate of Marvel Comics adaptations (Marvel projects in development at Sony include Jackpot, Kraven the Hunter, Madame Web, Silk, and Spider-Woman). Other Sony franchises that are likely to have new films released as part of this five-year deal include Bad Boys, Ghostbusters, Goosebumps, and Jumanji. This comes just one week after Netflix acquired the Knives Out sequels in a massive $469 deal, which we learned this week included $100 million payouts to just three people: star Daniel Craig, director Rian Johnson, and producer Ram Bergman. Lionsgate, the distributor of Knives Out, did bid on the sequels but lost out to Netflix.

3. AN ANCIENT ALIENS MOVIE IS IN DEVELOPMENT

Even if you’ve never seen any episodes of the 16 (!) seasons of the documentary series Ancient Aliens, you may have seen memes featuring wild-haired ufologist Giorgio A. Tsoukalos, or perhaps the Viceland series Traveling the Stars: Action Bronson and Friends Watch Ancient Aliens. As the title suggests, Ancient Aliens explores theories that ancient civilizations were visited and influenced by aliens as a way to explain amazing achievements, as first popularized in the 1970s by Chariots of the Gods. Just last week, Godzilla vs. Kong (Certified Fresh at 75%) featured a setting with a mysteriously unexplained ancient temple, and now that film’s production company, Legendary Entertainment, is collaborating with the producers of Cobra Kai (Fresh at 93%) for a feature film based on Ancient Aliens. Luke Ryan, who served as executive producer on Harold & Kumar Go to White Castle, is now working on adapting Ancient Aliens as a “two-handed, globe-spanning adventure,” which sort of makes it sound a bit like National Treasure, but with the “Ancient Aliens guy.” No casting announcements have been made yet, but we’re imagining Nicolas Cage would be perfect for something like Ancient Aliens.

Although there are still many large nations that have never had female presidents or prime ministers (you might be living in one right now), this was a distinction that Israel overcame as early as 1969, when Golda Meir became Israel’s fourth Prime Minster. Meir’s five years as Prime Minister included the Yom Kippur War of 1973, and now that period is going to be depicted in a biopic called Golda, starring Helen Mirren. Golda will be directed by Israeli filmmaker Guy Nattiv, who won an Academy Award for Best Live Action Short Film for Skin, working from a screenplay by screenwriter Michael Kuhn (Florence Foster Jenkins, The Duchess). Although described as a biopic, Golda will focus on how Meir led her nation during the Yom Kippur War despite “infighting from her all-male cabinet.” Barbra Streisand is also currently developing a TV series about Golda Meir starring Shira Haas (Unorthodox) in a more expansive story that includes her life as a young woman in Milwaukee, Wisconsin.

It happens every year (although it’s a little later this year), as Academy Award nominees or winners start to see new deals come their way as a result of their elevated profile during “awards season.” Besides the most obvious factor of the COVID-19 pandemic, another difference this year is that one of the Academy Award-nominated movies is Borat Subsequent Moviefilm (Certified Fresh at 85%), for which Bulgaria’s Maria Bakalova is nominated. One might usually expect a new Academy Award nominee to sign up for something like a stuffy period film, but instead, Bakalova is attached to star in a slasher film for A24 (Midsommar) called Bodies, Bodies, Bodies. Bakalova’s other main co-star will be Amandla Stenberg (The Hate U Give), and Pete Davidson (Saturday Night Live, The King of Staten Island) and Myha’la Herrold are also in talks. No details have been revealed as of yet about the film’s premise (other than it’s a “secret stalker” that A24 has been putting together for several months now), and that it will be directed by Dutch filmmaker (Instinct, Fresh at 80%).

6. LETITIA WRIGHT TO STAR AS HALF OF THE SILENT TWINS

Marvel Studios and director Ryan Coogler are expected to start filming the sequel Black Panther II in July, and one of the stars expected to return for a significant role is Letitia Wright, who played T’Challa’s sister Shuri in the first film. This week, we learned that one of the projects Wright recently filmed in Portland, Oregon before heading back to Wakanda is a fact-based drama called Silent Twins. Focus Features has picked up the worldwide rights to Silent Twins, which is based on the true stories of June and Jennifer Gibbons, who were identical twins who were part of the only black family in a small town in Wales. It’s being reported that the sisters will be played by Letitia Wright and Tamara Lawrence, which is a little confusing since Wright and Lawrence don’t really look like each other (unless, perhaps, they play the sisters at different ages?). The title Silent Twins refers to the fact that the two girls refused to talk to anyone else besides each other.

Not all 1990s stars remain as famous as others. For example, Will Smith is still pretty much an A-list star, but knowing who Christopher Reid and Christopher Martin were will probably score you some points at your local trivia night. Together, the two Christophers were known as the hip hop group Kid ‘n Play, and in addition to their musical career, they were also the stars of the first three House Party movies (House Party, Fresh at 93%; House Party 2, Rotten at 21%; House Party 3, Rotten at 0%). New Line Cinema and producer LeBron James have been quietly developing a House Party reboot for a few years now, and this week, the reboot got closer to filming as the two leads have been cast. The new House Party stars will be relative unknowns Jorge Lendeborg Jr. and Tosin Cole, and the director will be music video director Calmatic, who will be making his feature film directorial debut.  Jorge Lendeborg Jr.’s highest profile role to date was probably as Hailee Steinfeld’s friend “Memo” in Bumblebee, and Tosin Cole is probably best known for playing the companion Ryan Sinclair on 22 episodes of Doctor Who from 2018 to 2021.

More so than any other genre, horror franchises sometimes seem critic-proof when it comes to their ability to continue getting new sequels produced in perpetuity. For example, none of the Saw movies has ever scored a Tomatometer higher than the Rotten 49% for the very first Saw, and yet, next month’s Spiral: From the Book of Saw will be the ninth movie in the franchise. According to the film industry magazine Production Weekly, active development has begun on a mysterious project called Saw X, which, presumably, is exactly what it sounds like. There’s not really much else to go on right now, including whether it will be a continuation of the characters introduced in Spiral: From the Book of Saw, which include roles played by Chris Rock and Samuel L. Jackson.

The bird-shaped marshmallow candy brand Peeps is obviously popular, based just on the claim that Peeps Incorporated sells over 700 million Peeps each year (admittedly a lot less than the number they make, which is reportedly over 2 billion). Having said that, Peeps is not inherently a narrative brand, since they’re literally just birds in bright neon-colored marshmallow form, but that also didn’t stop the Trolls dolls from getting their own animated movie (and a sequel and a spinoff series). And so, yes, Peeps is now in development as an animated movie to be produced by the team that gave us The Mauritanian (Fresh at 73%), which recently won Jodie Foster a Golden Globe for Best Supporting Actress. A representative for Just Born, the company behind Peeps, had this to say: “Peeps Chicks and Bunnies have been ingrained in American pop culture for nearly seven decades due to their instantly recognizable shapes and fan-favorite marshmallow taste, making them the perfect characters to bring to life on the big screen.”