The spunky co-host of the Rotten Tomatoes Show shares her passion for film with us.

Earlier this year, Rotten Tomatoes and Current TV took a chance and launched a movie review show unlike any other: one based on the myriad opinions of the moviegoers themselves. The Rotten Tomatoes Show, now 25 weeks old, has been a success, featuring webcam reviews submitted by viewers, Current TV and RT community members, film critics, and filmmakers. However, another big reason for its success is the chemistry and wit of its hosts, Ellen Fox and Brett Erlich.

Ellen majored in English at Rutgers University. She moved to Chicago and spent the next ten years writing about culture and entertainment for the city’s newspapers – including film reviews for the Chicago Tribune. Along the way, she also studied and performed in the city’s respected improv comedy scene. In The Rotten Tomatoes Show she has found a new home, and we just couldn’t picture the show without her. Read up on Ellen’s Five Favorite Films here, then check out her RT profile and add her as a friend!

I’m not being sarcastic: Xanadu is the foundation of my aesthetic. It’s a 1980 musical in which angsty painter Michael Beck meets muse Olivia Newton-John and an aging musician (Gene Kelly) from the Big Band Era. Naturally, they team up to open a roller-disco complete with tap dancing, leg warmers, and Zeus. All of it woven together – in perfect sincerity – by an ELO soundtrack.

Like Xanadu, it’s a phantasmagoria – but more menacing. A lone teenage gal and her dog hit the (yellow, brick) road and pick up a trio of men along the way. Try pitching that idea to a Hollywood studio! The only film in recent memory with a similar story was the lugubrious indie Wendy and Lucy, which I couldn’t even finish. Maybe a flying monkey or a smartly dressed munchkin might have perked things up.

My ideal man was Christopher Reeves’ Superman; my ideal woman Lynda Carter’s Wonder Woman. But here was my first glimpse of the electricity that can crackle between two such sexy grown-ups. Like Oz, it’s another 1939 tale about a dark-haired, willful farm girl. But Scarlett O’Hara’s desires aren’t as heady as Dorothy’s; they run hot and elsewhere. Thanks to the manic perfectionism of both producer David O. Selznick and Vivien Leigh, it’s the best depiction of female desire ever captured on film.

Gene Kelly plays a silent film star who falls for cloche-wearing babe Debbie Reynolds during the industry’s awkward transition to talkies. Hollywood: The sunshine! The song-and-dance! The handsome, dynamic men! It only took me 25 years to discover it’s all true. There’s a funny-terrifying scene about the complexities of wiring Kelly’s bitchy leading lady for sound. Sometimes I think of it when I’m taping a tiny microphone inside my bra and running the wire out through my armpit.

This clever-enough confection about warring cheerleaders proves that films don’t have to be classics or award-worthy to work their magic. I wish I could say it was James Taylor’s music or Robert Frost’s poetry that soothed my post-9/11 anxiety. But no, it was star Kirsten Dunst’s perky, bouncing breasts that lifted my spirits. Whether ever-so-lovingly hoisted in a bikini top or shaking to-and-fro as she dances on her bed, with ta-tas like hers in our midst, I wondered, could the world still be that hopeless of a place?

Watch The Rotten Tomatoes Show every Thursday at 10:30pm (check your local listings) on Current TV, or catch the most recent episode online, here.

To add Ellen to your friends list, check out her profile here. 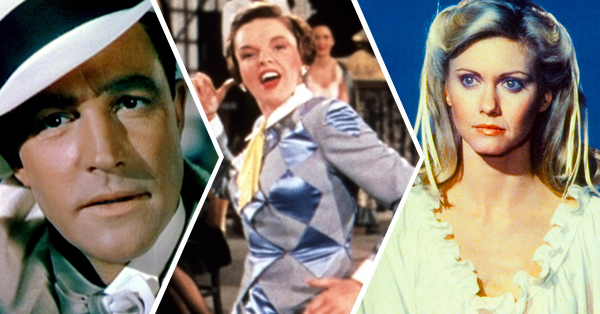 5 Movie Musicals to Watch with Your Family During the Holidays

RT on DVD: A Killer Sopranos Set; WALL-E Gets a Friend