On why he's such a petrol head.

Not a lot of people know that actor Eric Bana, familiar to most from roles in the likes of JJ Abrams’s Star Trek, Steven Spielberg’s Munich and Ang Lee’s Hulk, is a massive petrol head. With the release of Love the Beast, Bana aims to change that. A love letter to his pride and joy, a Ford GT Falcon Coupe which he’s owned since he was 15, the film is a documentary about his obsession with it and with racing, and the mourning attached to his crash during the Targa rally in 2007. Along the way Bana interviews the likes of Jeremy Clarkson, Jay Leno and Dr. Phil as he attempts to understand his passion better. In London to promote the UK release — it’s out on DVD now — Bana sat down with RT to talk more about his pride and joy.

Why have you come to London to promote this when you should be fixing the Coupe? What’s the status?

Eric Bana: [laughs] The status is it’s getting there. It’s taken us probably a year to get all the bits and pieces together, but we’ve started so in the not too distant future it’ll be on the road.

Most won’t know you as a car fan, but the passion is palpable. Has that been there from the very beginning?

EB: Yeah, I guess so. It’s always been my hope, as an actor, to reveal only what is relevant about myself to the work. So I’m not surprised that most people are surprised to know I’m into cars, but it’s something that’s been there since I was born. There wasn’t a moment where I got into cars. It wasn’t a conscience decision or something that came later, it was there since I was born. I just love it.

You mention the importance of Mad Max in the film as a movie that combined both passions for you, are there others?

EB: Yes and no. I do feel like, as a car person, I’m somewhat manipulated by them. I mean, there are some that go down as all-time classics. They don’t hold up as great pieces of cinema but they do hold up for someone who’s obsessed with cars.

However, I don’t think that’s the case with modern films. One of the reasons I wanted to make this film was that I felt like there was really no connection between me and a lot of the modern car films. I felt they were more about, “Hey, if we put this car in a film and we do a big chase sequence, car guys will like this.” Those films don’t appeal to me so much. All of my favourite car films are very old ones, and even then there’s quite often a disconnect.

I felt that what was missing from them was this social notion that a car can transcend itself and become something else.

Bana with the original Beast

Jeremy Clarkson says in the film that machines are supposed to be perfect and infallible, but because cars aren’t, they have a personality and you can bond with them — do you think maybe that’s what’s missing from modern car movies, that the car is no longer a character?

EB: I guess there’s an element of that; I think that’s because of the kind of cars in car movies these days. It’s very hard to get the same sort of emotion out of a modern vehicle because they are so perfect, and it’s very hard to have a tactile relationship with them.

One of my closest friends, who I made the film with, has a fifteen-year-old son with whom he’s building a car. They’ve had to go back to 1979 or 1982 to get a car he could work on. You know what I mean? It’s going to be interesting to see what our kids will work on, if they even do. Will it just be a sealed unit that you dispose of? You have to go back to the 80s to find a car you can just open the bonnet and take a spanner to.

Do you think that’s actually going to die, then?

EB: To a degree I think it will. I think the value of the old cars will be maintained as people realise they’re the kind of cars you can work on. And by work on I mean work on; I don’t mean putting a fibre-glass bonnet on and some big speakers. I could be wrong but I can’t see kids stripping engines down and rebuilding them on the latest 325 BMW ten years from now.

Do you think this hobby is something that’s culturally more active in your native Australia?

EB: It’s a good question, and it’s why I wanted to put my childhood in context in the film. To understand my obsession you sort-of need to understand where I came from, growing up in the suburbs out near the airport where there was space and room to play with these things and to tinker and go and test your skills in an environment that wasn’t a threat to anybody. In that respect, the world has changed a little bit. It’s gotten more heavily populated and we have stricter road rules. We have more speed cameras, heavier population. It is a different environment to what it was when I was growing.

When you crashed the car and you thought it was a write-off, it was most surprising that after 25 years you were questioning whether that was the end of this obsession for you — did you ever seriously consider that?

EB: Not that part of my life, but that the car could be over, yes, because it was a real threat. If the car was so badly damaged that it would have required a re-shell, I wasn’t going to do it. That’s an exercise in spending money, and if the car has reached its natural end, so be it. Fortunately I found someone who was capable of repairing the structural damage to the extent that we didn’t have to re-shell the car. That’s the only reason the car’s being rebuilt — I would not have re-shelled the car. To me that would have been a different vehicle.

And there was a real threat that the car wasn’t going to be rebuilt. Technically speaking, you can build anything out of sand; it doesn’t mean you do it. I had some middle-class guilt that I had the resources to go out and do that again and I just finished rebuilding the car over a two-year period, and to be honest I was out of emotional energy at that point, too. I just waited until recently, when there was enough distance between myself and the project, to just go back to it and tinker with it again.

Would you have found a different car and carried on if it had been a re-shell?

EB: I’ve always had other vehicles and I’ll always tinker, so that part of my life would have been the same I guess, but the car itself would probably have been at its end, and the film would have been its final chapter. Fortunately it looks like it will rise from the ashes.

Do you know when the car will be back on the road?

EB: Oh it’ll be less than twelve months from now.

EB: [laughs] I don’t think there’ll be a sequel! I’m sure a photo will end up in a magazine or two at some point!

Now that I’m rebuilding it, I do feel good about it. The film was really well received back home and I got some letters that I’ve just never received in my life, you know; letters you’d never get as an actor. They’re from people who saw the film with their wives and at the end of the film, without them saying anything, their wives have turned to them and said, “OK, you can do it — you can buy that car that you’ve been putting off for 10 years.” It’s really incredible, but the film seems to have appealed to people who aren’t into cars and it’s helped them understand that it isn’t just about a car. It’s also about the social or emotional importance that having a hobby and an outlet and some kind of artisan experience can provide. 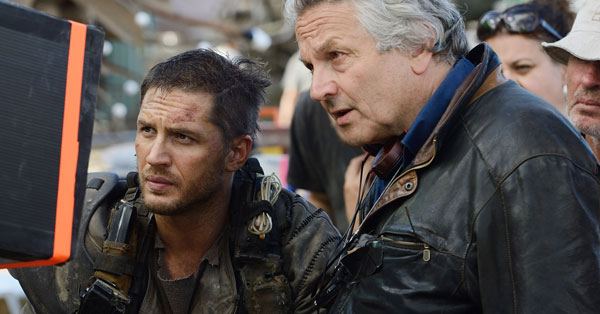