Disney Is Developing a Live-Action Hercules Remake, and More News

This Week’s Ketchup brings you seven headlines from the world of film development news, covering such titles as Hercules, Space Jam: A New Legacy, and the animated Transformers prequel. 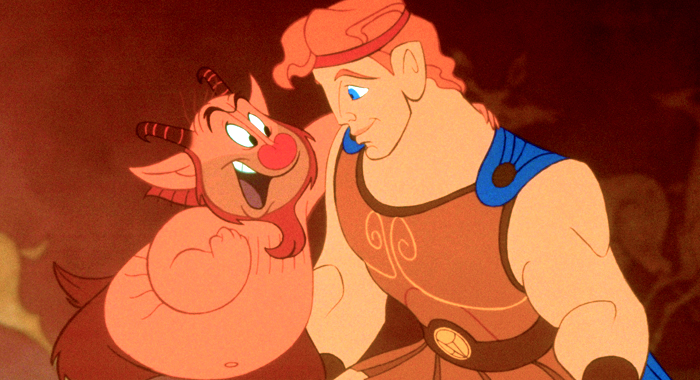 Of the 10 animated features that Walt Disney Pictures released between 1989 and 1999, three have been remade in recent years (Beauty and the Beast, Aladdin, and The Lion King), two are currently waiting to be released or in the works (Mulan and The Little Mermaid), and still one more just entered development last year (The Hunchback of Notre Dame). We’re probably never going to get a live-action Rescuers Down Under, so that only leaves Pocahontas, Tarzan, and Hercules, one of which is now also officially in the works. Walt Disney Pictures is now developing a live-action remake of their 1997 mythological animated musical Hercules (Certified Fresh at 84%), and it will have two direct connections to Marvel Studios in the form of producers Joe and Anthony Russo (the directors of Captain America: Civil War, Avengers: Infinity War, and Avengers: Endgame) and screenwriter Dave Callaham, who is currently working on Marvel’s Shang-Chi and the Legend of the Ten Rings (5/7/2021). It is reportedly unclear if the remake will have musical songs from the original, or if it will be a non-musical remake like Mulan, and we don’t yet know who will direct it (although there have been some rumors). Another question left to be addressed is where this puts Marvel’s own version of Hercules, who is one of the earliest members of the Avengers (#11, just before Black Panther and Vision), and one of the longest-running team members as well (his longest stint was in the 1990s). Hercules also has the distinction of being one of the few Marvel Comics characters to receive a popular Internet meme as the “COOL STORY, BRO” guy without also appearing in the Marvel Cinematic Universe. Could the Hercules remake end with someone like Nick Fury inviting him to join the New Avengers Initiative?

1. MAJOR FILM FESTIVALS UNITE FOR WE ARE ONE ON YOUTUBE

The COVID-19 pandemic has obviously had an impact on all sectors of society, but some of them didn’t necessarily present obvious alternatives within a “stay-at-home” strategy. For example, yes, movie studios could reschedule their theatrical releases or release some of them on VOD, but the world’s various film festivals are designed to bring people together from across the globe into spaces where they would breathe the same air for two hours in close quarters. So what’s going to happen to the dozens of movies that would have premiered at those festivals in 2020? YouTube and Tribeca Enterprises appear to have found a solution, which will be an event called We Are One: A Global Film Festival that will be presented on YouTube from May 29th to June 7th, 2020. The event will feature programming from 20 major film festivals including Sundance, Berlin, Cannes, New York, Toronto, Tribeca, and Venice. One of the festivals that will not be participating is SXSW, because they are already partnering with Amazon for a separate event now streaming (4/27 to 5/6).

Although the 2018 solo Transformers spinoff Bumblebee did very well with critics (Certified Fresh at 91%), the box office numbers were relatively disappointing compared to previous Transformers films. For that reason, Paramount and Hasbro have yet to announce plans for any further solo movies for other Transformers characters, even if they continue to develop other Transformers-related projects. With the latter in mind, one of the new Transformers films Paramount is working on is an animated prequel to be set on their home world of Cybertron. That project is now being developed by director Josh Cooley, who made his feature film debut last summer with Toy Story 4 (Certified Fresh at 97%), which went on to earn over $1 billion at the global box office and win the Academy Award for Best Animated Feature.

After starring in several acclaimed indie dramas (notably Blue Ruin, Certified Fresh at 96%), Macon Blair moved on to directing with his debut film, Netflix’s I Don’t Feel at Home in This World Anymore (Certified Fresh at 89%). For his next film, Blair has signed with Legendary Entertainment to direct a Twins-esque high-concept comedy called Brothers. Danny DeVito and Arnold Schwarzenegger starred in Twins as a pair of “odd couple” brothers, and the brothers in Brothers will be played by two Avengers: Infinity War stars. Those stars will be Peter Dinklage (Tyrion Lannister from Game of Thrones) and Josh Brolin (Marvel’s Thanos and Cable), but the comedy angle besides them being Brothers isn’t yet known.

4. DAISY RIDLEY SHOULD WATCH OUT FOR THE ICE BENEATH HER

Now that the Star Wars “Skywalker Saga” is officially done, Daisy Ridley is one of the recent franchise stars who has a lot more time on her hands. We’re still awaiting the release of one of those projects, the post-apocalyptic Chaos Walking, and this week, she started negotiations for  another. Ridley is now in talks with STXfilms to star in the psychological thriller The Ice Beneath Her, which will be produced and directed by the people behind last year’s Ready or Not (Certified Fresh at 88%). The Ice Beneath Her is an adaptation of a 2015 novel by Swedish author Camilla Grebe which has been compared to both Gone Girl and The Girl on the Train.

Recent Star Wars star Adam Driver (a.k.a. Kylo Ren) earned his first Academy Award nomination for the 2018 film BlacKkKlansman (Certified Fresh at 96%), which was based on a previously obscure mid-20th century true story. This week, Driver signed on for another similar project, and this time, the true story will send him to the Cuban Revolution of the 1950s. The project is called Yankee Comandante, which is an adaptation of a 2012 article in The New Yorker by reporter David Grann. Grann’s story uncovered the story of a man from Ohio who held the same title of “Comandante” shared by Che Guevara. Yankee Comandante will be directed by Jeff Nichols, whose most recent film was another 20th century true story, Loving (Certified Fresh at 89%).

Karen Gillan has played both a time traveler (Doctor Who), a video game character (Jumanji: The Next Level), an alien (Nebula from Guardians of the Galaxy), and a cyborg (well, that was also Nebula), and soon, it appears she will also be playing a clone (or clones). Gillan, Aaron Paul (TV’s Breaking Bad), and Jesse Eisenberg are all now attached to star in a satirical science fiction thriller called Dual. Riley Stearns (Faults, The Art of Self-Defense) will direct the project about a woman (Gillan) with a deadly condition who decides to be cloned to spare her family their loss, which leads to a conflict when she has a miraculous recovery and survives, forcing her to “duel” her “dual.” Jokes!

That NBA star LeBron James is producing and will star in a Space Jam (Rotten at 43%) sequel has been known for a while, but until this week, we were all just calling it Space Jam 2. Maybe the delay was in waiting for the hats to come back with the logo, but if so, those boxes apparently came in, because LeBron James took to Twitter to show off a picture of exactly that. James’ branded baseball cap shows off the title as Space Jam: A New Legacy. Sonequa Martin-Green (Star Trek: Discovery) and Don Cheadle (as the villain) will also co-star in Space Jam: A New Legacy, which is currently scheduled for July 16, 2021. As with the first movie (which featured not just Michael Jordan but also Charles Barkley, Muggsy Bogues, and Patrick Ewing), we can soon expect to hear about other NBA stars joining LeBron James in Space Jam: A New Legacy, which will be directed by Malcolm D. Lee (Girls Trip, The Best Man).

8. GINA RODRIGUEZ TO STAR IN STONER COMEDY THE ALIENS ARE STEALING OUR WEED

One thing that was always odd about Hollywood producing “stoner comedies” like Half-Baked and Up in Smoke is that they were released when prohibition against cannabis was in place in all 50 states (i.e. how easy was it for police to find smokers to arrest when these movies were in theaters?). As several states have lifted or loosened such laws in recent years, one might have expected a rush to make more “stoner comedies,” but thus far, there hasn’t been much of a change. Having said that, this week, Paramount Pictures acquired a spec script called The Aliens Are Stealing Our Weed from screenwriter Ryan Firpo (Marvel’s The Eternals). Gina Rodriguez (TV’s Jane the Virgin) is already attached to star as one of two pot growers who “uncover an alien conspiracy to steal the planet’s marijuana supply.”

Although both Now You See Me (Rotten at 50%) and its sequel Now You See Me 2 (Rotten at 34%) received “Rotten” Tomatometer scores, the films had box office numbers over $300 million each, so it always seemed likely that Lionsgate would proceed with sequel plans. It was years ago now that we heard that one of those sequels (or a spinoff) would be China-centric, but it’s also been a while now since we heard about that project. This week, Lionsgate announced that they are now developing a “fresh take” on Now You See Me from screenwriter Eric Warren Singer (The International; co-writer of American Hustle and Top Gun: Maverick). Singer’s screenplay reportedly unites both the “key returning cast” and new characters. Although no actors have officially signed to return for Now You Can See Me 3, some of the possible returning cast could be Sir Michael Caine, Lizzy Caplan, Morgan Freeman, Dave Franco, Isla Fisher, and Zombieland stars Jesse Eisenberg and Woody Harrelson.