WB plans to start The Batman, Depp-less Pirates moves forward, the next Star Trek voyage has been cancelled, and lots of new casting stories.

Today’s Ketchup brings you another 10 headlines from the world of film development news, covering stories from the last few weeks (because of the holidays) for titles such as The Batman, Dune, Jumanji 3, Disney’s reboot of Pirates of the Caribbean, and Venom 2. 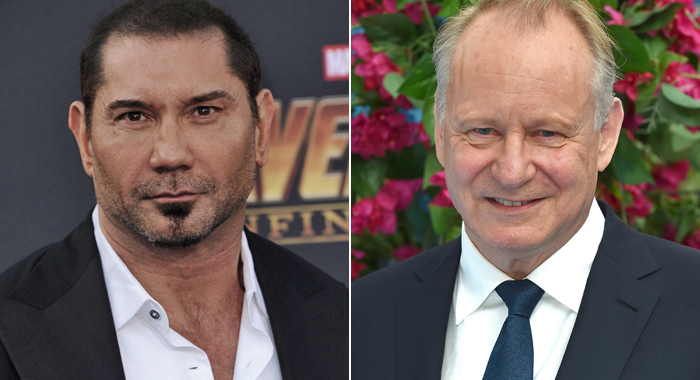 Blade Runner 2049, the 2017 science fiction sequel directed by Denis Villeneuve (Arrival, Sicario) may have been a relative box office disappointment, but it was also Certiified Fresh at 87%, and as the expression goes, “that’s not nothing.” Denis Villeneuve is also set to revisit another 1980s sci-fi film that underperformed at the box office, but this time, it’s a straight up remake/reboot. We’re speaking of David Lynch’s Dune, the Frank Herbert adaptation that earned less than its production budget upon release in 1984. For his Dune, Denis Villeneuve has already cast Timothée Chalamet (Call Me By Your Name, Lady Bird) as the film’s lead character, Paul Altreiedes, and Rebecca Ferguson (of the Mission: Impossible franchise) as his mother. Dune has a large ensemble cast of characters, and this week, Villeneuve focused on the Houe Harkonnen. Stellan Skarsgard, who co-starred in Marvel’s Thor movies, has been cast as the blister-plagued villain Baron Harkonnen (hope he likes hours in the makeup chair). Dave Bautista, who played Marvel’s Drax in Guardians of the Galaxy and had a small role in Blade Runner 2049, has also joined Dune as “the Beast, Rabban,” in a casting decision which suggests the character will have a higher profile than he did in David Lynch’s film. Dune does not yet have a release date (but it’s expected to be sometime in 2020).

Throughout much of his career, director Wes Anderson has specialized in working with large ensemble casts, notably starting with 2001’s The Royal Tenenbaums (Certified Fresh at 80%). We’ve known for a few months now that Anderson’s next film will be called The French Dispatch, and that it will be set in the Paris bureau of an American newspaper (possibly during the years after World War II). The latest actor to join the film’s ensemble  is Henry Winkler, who’s probably most famous for his long-running role as The Fonz on TV’s Happy Days but has also had memorable roles on Arrested Development and the new HBO series Barry, for which he was nominated for a Golden Globe. The French Dispatch will feature such Wes Anderson alumni as Mathieu Amalric, Bob Balaban, Adrien Brody, Frances McDormand, Bill Murray, Saoirse Ronan, Léa Seydoux, Tilda Swinton, and Owen Wilson. Others who are joining Winkler as first-time actors working with Wes Anderson include Timothée Chalamet, Benicio del Toro, Lois Smith, and Jeffrey Wright.

The original Jumanji was arguably a star feature for mostly just Robin Williams (at best, Kirsten Dunst’s star was also on the rise). For 2017’s Jumanji: Welcome to the Jungle (Certified Fresh at 76%), the formula was expanded to include four stars (Jack Black, Karen Gillan, Kevin Hart, and Dwayne Johnson). It sounds like we can expect this year’s third Jumanji (12/13/2019) to expand the video game roster even further, with both Awkwafina and Danny DeVito now joining the franchise. We should note that nothing has yet been revealed about their characters, including whether they are video game avatars, NPCs, or “real world” players. Jumanji 3 comes as Awkwafina prepares to film two sequels to last year’s Crazy Rich Asians (and she’s also voicing a character in this summer’s The Angry Birds Movie 2). Danny DeVito will likewise be coming off his co-starring role in Disney’s live-action remake of Dumbo (3/29/2019).

Dreamgirls and American Idol star Jennifer Hudson is currently filming her role as Grizabella in this year’s Cats (12/20/2019), but the pieces are already falling into place for her next major movie musical, namely Respect, MGM’s biopic about the life of R&B singer (and many other things) Aretha Franklin, who died last year at the age of 76. Respect will mark the feature film debut of stage director Liesl Tommy, whose Eclipsed received six Tony nominations, including Best Director (making Tommy the first African American woman to be nominated in that category). Tommy will be working from a screenplay by Thelma & Louise screenwriter Callie Khouri, who was the showrunner of TV’s dramatic series Nashville.

The Weekly Ketchup for the first full week in January also covers all of the previous weeks going back past Christmas, which, for the sake of consolidating news stories, means that we get to cover two separate Tom Hanks movies. Hanks wrapped up filming of the film in which he plays PBS star Fred Rogers in November, but it had remained “untitled” for a while after the early title You Are My Friend was dropped. We can now report that the film will be called A Beautiful Day in the Neighborhood, which directly borrows from Rogers’ signature song, when it is released on October 18, 2019 as an early “awards season” contender. For his next film, Tom Hanks is returning to the post-apocalyptic future (a la Cloud Atlas) in BIOS, as an ailing inventor who builds a robot to keep his dog company after he’s gone. That robot, with the help of motion capture animation, will be played by Caleb Landry Jones, who in 2017 had a significant role in Three Billboards Outside Ebbing, Missouri. Miguel Sapochnik, who directed the Emmy-winning “Battle of the Bastards” episode of Game of Thrones, will be directing BIOS for Universal Pictures.

Sometimes big movie news stories are “buried ledes” in other stories. One such example came this week as we learned that Warner Bros. is eyeing a production start for The Batman in November, 2019 in a larger piece speculating about the year in general. There are still many things we don’t know about The Batman, including who might be cast now that we’re 99% sure that Ben Affleck is done with playing Bruce Wayne. (Many of those questions are asked in this Hollywood Reporter piece.) One thing that we do know now is that director/writer Matt Reeves (War for the Planet of the Apes) has turned in his final draft for The Batman, which is ostensibly why Warner Bros. feels the pieces are coming together for a start as early as this year. Other Batman-related projects that Warner Bros has coming soon include this year’s Joker (10/4/2019) and next year’s Birds of Prey (and the Fantabulous Emancipation of One Harley Quinn) (2/7/2020), starring Joaquin Phoenix and Margot Robbie, respectively.

4. PIRATES OF THE CARIBBEAN REBOOT MOVING FORWARD WITHOUT JOHNNY DEPP

Deciding where to draw the sometimes thin line between what is a Fresh or Rotten story can sometimes be a tricky proposition. For example, one could look at the declining Tomatometer scores for Disney’s Pirates of the Caribbean franchise and say that, therefore, any future Pirates movie is not only “Rotten,” but very much so. The latest news is that Walt Disney Pictures appears to be developing a Pirates of the Caribbean reboot, which would move forward without Johnny Depp’s Jack Sparrow character. That, then, begs the question, of whether Jack Sparrow has helped drag down the Pirates Tomatometer, and a new lead might return the franchise to the Certified Fresh status of the first film. Nothing is confirmed yet, but there are indications that the franchise’s new lead will be the female pirate called Captain Redd. One of the key factors suggesting that rumor is the raised profile that Disney is giving to Redd, both in toys, and on the Pirates of the Caribbean park ride itself. Having said that, there are still enough unknowns here that any new Pirates of the Caribbean movie is still a borderline Rotten Idea until we learn more.

Video game adaptations remain arguably the most reliably Rotten type of movie. Sometimes, movies like The Angry Birds Movie are still able to attract an audience ($352 million globally) despite a Rotten Tomatometer score of just 44%. As such, Sony Pictures quickly started production of The Angry Birds Movie 2, which is already scheduled for release this summer, on August 16, 2019 (up against Playmobil: The Movie). The new voice cast will include pop singer Nicki Minaj, rising star Awkwafina (who also recently joined Jumanji 3), Saturday Night Live star Leslie Jones, This is Us star Sterling K. Brown, and Eugenio Derbez (of last year’s Overboard remake). These new voice actors will join such cast members from the first movie as Peter Dinklage, Josh Gad, Bill Hader, Danny McBride, and Jason Sudeikis.

2. SONY BITES INTO ITS SEQUEL PLANS FOR THE NEXT VENOM

There is such a conspiracy theory out there about the Tomatometer scores of Marvel movies that when one types in “disney pays” into Google, the first auto-feed option is “Rotten Tomatoes.” (If only we had a page on the site that explains how Tomatometers work.) One of the lowest Tomatometer scores delivered to a major motion picture in 2018 went to Venom (Rotten at 28%), which, despite that score, was still able to earn over $855 million globally as the year’s #6 film. Obviously, Sony Pictures is moving forward with a Venom sequel, which is expected to take the slot they’ve reserved for October 2, 2020. To that end, Sony has hired Kelly Marcel, one of the first film’s co-writers to work on the sequel, which is expected to feature Woody Harrelson’s end-credits serial killer character, Cletus Kasady, AKA Carnage. Tom Hardy will obviously return, and Michelle Williams is expected to return as well. Director Ruben Fleischer will be busy with Zombieland 2, so a new director is currently being sought by Sony.

1. THE NEXT STAR TREK VOYAGE HAS BEEN CANCELLED

Previously in this column up above, we mentioned how big movie stories are sometimes “buried ledes,” and that applies to this week’s most Rotten news. Let’s start with this piece about HBO’s Game of Thrones prequel series, and how the pilot will be directed by one S.J. Clarkson. In the second paragraph, referencing the fourth Star Trek with the current cast, the article casually states, “That project has since been shelved.” Luckily, we have other sources, like Scott Mendelson of Forbes, who can take six words and delve into many more details. That just leaves us to clarify that the first three movies all received Certified Fresh scores: Star Trek (94%), Star Trek Into Darkness (85%), and Star Trek Beyond (85%). So the decision to retire the “Kelvin” cast after just three movies is a “Rotten Idea” because they were still delivering Certified Fresh Tomatometer scores. Having said that, we still don’t know what will become of Quentin Tarantino’s Star Trek idea.