Bruce Wayne to Batman: The Caped Crusader’s Rite of Passage from Comic Books to Gotham

How did Batman come to be? Depends on who you ask. 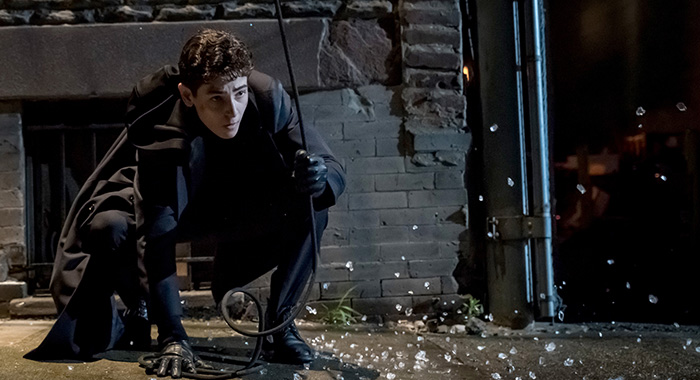 Gotham returned to Fox on Thursday night for its fourth season and with its return, Bruce Wayne (David Mazouz) takes his first steps to becoming the Batman. But he is only the latest version of Bruce Wayne to step from a difficult youth in to his destiny.

Some journeyed the world to learn the necessaries skills, while other tried to deny their fate. We thought we’d take a look back at some of the characters other rites of passage and how they may influence Gotham’s path to the Bat.

The first origin story by writer Bob Finger and Bill Kane – though Kane studio workers Jerry Robinson and Sheldon Moldoff likely contributed as well – still sets the tone for so many early Batman stories to follow. But for our purposes, the key moments occur on the second page. In the span of three panels, his rite of passage unfolds. In the first, a caption tells us, “As the years pass, Bruce Wayne prepares himself his career. He becomes a master scientist.” The accompanying image depicts Bruce in a lab coat surrounded by test tubes and a curious purple haze. In the subsequent panel, he holds aloft a circus barbell as the caption explains he “trains his body to physical perfection until he is able to perform amazing athletic feats.” In the third, he finally contemplates the creation of his alter ego.

Even today, Batman origin stories still feature Bruce’s attempt at mental and physical excellence. A multiverse of stories exist between the gutters of those three panels. Though the Bruce of Gotham is not as determined to be the peak of mental and physical accomplishment as his original comic book counterpart, he is no less determined to face the criminal underworld of his hometown. But perhaps it is not too late to see him become “a master scientist.” It is a rarely scene facet of his development no matter how insistent Homer Simpson might be on the matter. 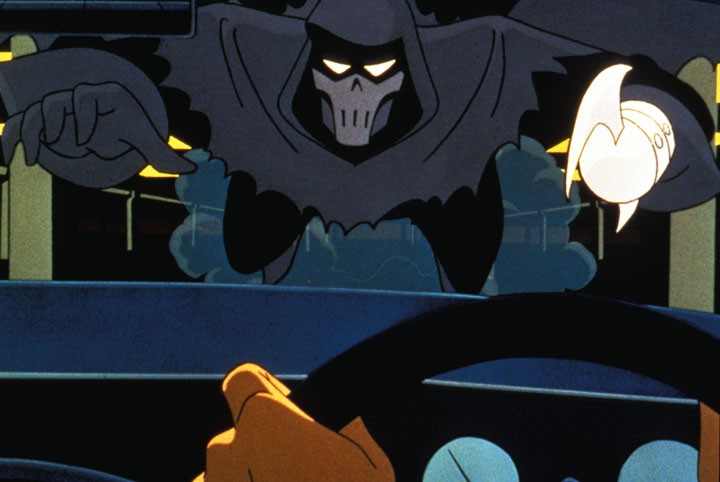 In one of the best theatrically released Batman stories, Bruce Wayne (voiced by Kevin Conroy) recalls his the days when he almost escaped becoming Batman. In his flashbacks, he meets Gotham socialite Andrea Beaumont (Dana Delany) just as he begins to fight crime in a generic mask – not unlike Gotham’s Bruce. Though he successfully foils a crime, the thief never fears him. The experience leaves Bruce discouraged and he decides to pursue a more domestic life with Andrea. Sadly, their engagement is short lived and Bruce has his fateful meeting with a bat in his father’s study.

Mask of the Phantasm is one of the first stories to feature Bruce considering a different life than the one seemingly chosen for him the night his parents died. The theme would appear in subsequent film and television outings – The Dark Knight Rises seems to resolve this idea with a happy ending. But for Gotham’s version of Bruce, it remains to be seen if he can even contemplate such a life or if he is as single-minded as the original Bat-Man. Granted, that version of the character also had a long engagement to a Gotham socialite. It did not end in a marriage.

In the first few pages Frank Miller and David Mazzuchelli’s Year One, Bruce attempts to take down a handful of Miller-staple pimps and a dominatrix-style version of Selina Kyle before getting in over his head. Saved by the Gotham City Police, Bruce manages to escape arrest in a bloody crash only to arrive home and entertain the infamous bat.

While only a handful pages, it suggests a way Gotham’s Bruce could soon find himself defeated by the very thing he hopes to curtail. In Year One, it led Bruce to create his identity and some of the earliest gadgets he would employ in his war on crime. On the show, Bruce will rely on Lucius Fox for his early suit, but will a nearly deadly defeat lead him to create the Batarang?

Of course, the series will expand on this brief idea in much greater detail as Gotham’s Bruce must strive for his mental and physical excellence while also considering how best to fight crime in Gotham. 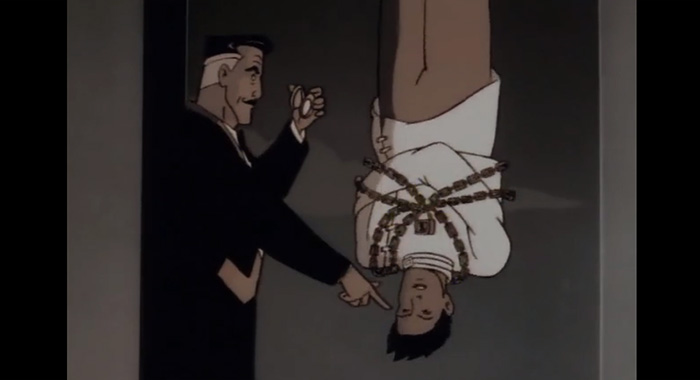 Almost a year before the release of Mask of the Phantasm, Batman the Animated Series writer Paul Dini introduced a generation of viewers to one of his favorite DC Comics characters, the magician Zatanna (voiced here by Julie Brown). The two team up to foil a professional debunker turned bank robber, but the most interesting parts of the story see Bruce remembering his time as the apprentice of Zatanna’s father Zatara.

In those flashbacks, Bruce goes by the name “John Smith” and shows great enthusiasm in learning the ways of an escape artist. Bruce specifically recalls a time Zatara tied him up in a straitjacket and reminded him that concentration was the key to a successful trick. Easily escaping from his bounds, the young Bruce impresses the magician. But all the while, a young Zatanna wonders why this “John Smith” wants to learn the art of escape if he has no interest in becoming a stage performer. She also has a something romantic attachment to him. Sadly for her, Bruce is much better at escaping those entanglements than any mere deathtrap. In his farewell note to her, he explains his wish to train in Japan.

The flashbacks take their inspiration from one of the more interesting ideas in Bruce Wayne’s backstory: that he traveled the world and trained with the best ninjas, magicians and assassins before returning to Gotham in his late twenties. The Animated Series took special advantage of this idea as it was rarely mined in the comics of the era beyond scattered lines of dialogue.

For Gotham, though, it is hard to say how much time Bruce will have to train with experts. It is not without reason Alfred Pennyworth has an SAS background now. It gets the producers of Gotham around Bruce’s quest to meet ninjas, Zatara, and others. Not that a certain magician and his daughter couldn’t come to town, mind. 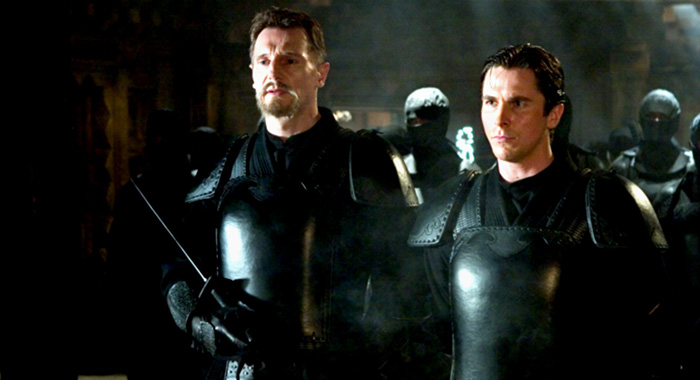 But if we’re going to talk about ninjas, there’s no better place to start than with Christopher Nolan’s Batman Begins. As the first true cinematic treatment of the few panels first depicted in “The Legend of the Batman – Who He Is and How He Came To Be,” it owes as much to The Animated Series as it does Year One. Though streamlined to send Bruce Wayne (Christian Bale) on his journey to Nanda Parbat The League of Shadows, it still suggests an epic journey as young Bruce abandons his comfy life in Gotham to steal onto a boat bound for Asia. And it is with the League that he learns many of the skills his cartoon counterpart learns from various masters across the globe. Of course, the ninjas expect him to destroy Gotham City as payment, so maybe trek the planet was a batter idea.

Also of interest is the depiction of the younger Bruce as a listless and angry boy. Instead of the dedication seen in “The Legend of the Batman – Who He Is and How He Came To Be,” The Animated Series, or Gotham, Nolan’s Wayne revels in a life without direction until his attempt to kill Carmine Falcone and his search for the League teach him something akin to humility.

Will the Bruce of Gotham need such lessons as well? He’s already made contact with Ra’s Al Ghul (Alexander Siddig), but the results do not seem as formative as they did in Batman Begins. 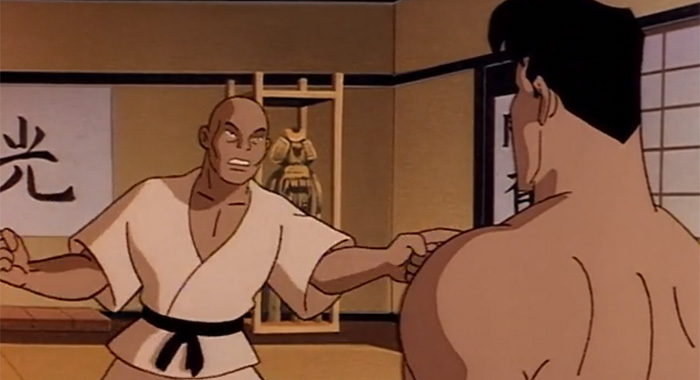 In another episode of The Animated Series in which Bruce’s past comes to haunt him, he faces ninja and thief Kyodai Ken.

As revealed in flashbacks, Kyodai and Bruce trained in the same dojo after Bruce left the tutelage of Zatara. Kyodai was the only pupil Bruce could not defeat. But when Kyodai attempted to steal a five hundred year old sword, Bruce still stood up to him and delayed his escape long enough for Yoru, the dojo master, to discover Kyodai’s betrayal. Finding himself expelled from the dojo, Kyodai vowed vengeance on Bruce.
Unlike the other examples of Bruce’s training days and rites of passage, this one includes an opponent he could not best. It’s an idea few other films or series followed up on or utilized. Although, Yoru’s insistence that a loss can teach Bruce more than a victory is reminiscent of Batman Begins’ motto that one falls to get back up again. 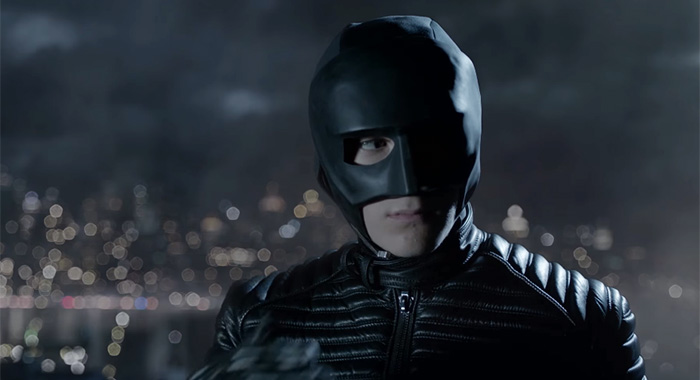 And, perhaps, the Bruce of Gotham needs that serious fall. Granted, he’s had his share of scrapes, escapes and emotionally devastating moments in the show’s first three years. But as these examples of Bruce’s journey to becoming the Batman reveal, it’s not as simple as the three panels on page two of “The Legend of the Batman – Who He Is and How He Came to Be” would suggest. Though it is easy to see money and privilege as Batman’s primary powers, it’s really the dedication to overcome adversities which made him a formidable crime fighter. Though it remains to be seen which of these mentors and experiences will help shape him into the Dark Knight he is destined to be.

Then again, Gotham specializes in recontextualizing events like these in unexpected ways.