Have a look at the February TV and streaming titles that celebrate Black artists and honor Black heritage. 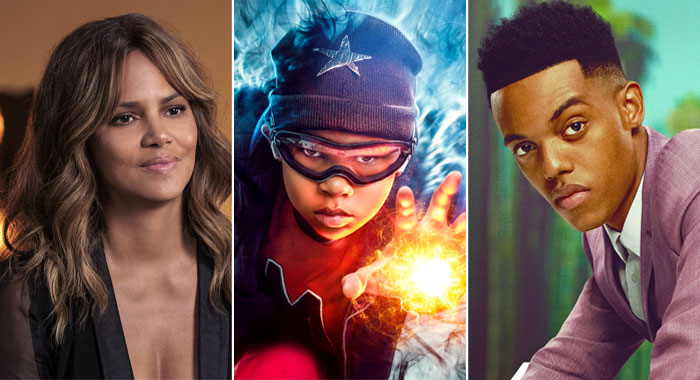 To commemorate Black History Month, networks and streaming platforms offer an array of films, TV series, documentaries, and specials that honor the Black experience. Nearly every streamer has entertainment hubs celebrating Black excellence, be it in front of the camera or behind it. And while these collections are highlighted for February, many of the titles featured are available for viewing year-round.

We’ll also see the network return of black-ish for its eighth and final season on ABC; the premiere of Bel-Air, the updated take on The Fresh Prince of Bel-Air, to Peacock; and superhero antics continuing in season 2 of Netflix’s Raising Dion.

On the movie front, Tyler Perry brings his iconic Madea character back in A Madea Homecoming, premiering later in the month to Netflix, while Prime Video pays tribute to late actor Sidney Poitier with a slate of titles highlighting his career.

Read on for the month’s TV and streaming highlights. We’ll update the calendar as additional titles are announced, so check back for new programming.

Netflix’s original content coming in February, be it docuseries like the highly-anticipated Jeen-yuhs: A Kanye Trilogy — which explores the last two decades of Kanye West’s life as he rose to mega-stardom — and RACE: Bubba Wallace, the project about Bubba Wallace, NASCAR’s only Black competitor, are sure to excite and inform. Prime Video also looks at the lighter side with Tyler Perry returning for A Madea Homecoming and new stand-up comedy, including Ms. Pat’s first-ever hour-long comedy special titled, Ms. Pat: Y’all Wanna Hear Something Crazy? and Mo Gilligan’s There’s Mo to Life. New content aside, the streamer’s got a plethora of films and series available to watch (Colin in Black and White, Dear White People, When They See Us, 13th, Quincy, Da 5 Bloods, #blackAF, Beyonce’s Homecoming), plus currently streaming titles like I Am Not Your Negro, Loving, Spike Lee’s original She’s Gotta Have It, CW drama All American, and FX’s Pose.

Amazon’s curated page is dedicated to celebrating “Black joy. Black love. Black Laughter.” in February. Recent original programs like The Underground Railroad, Them, and Harlem are available to stream and upcoming docuseries Phat Tuesdays: The Era of Hip Hop Comedy will become available in the month. Other offerings include Coming 2 America, One Night in Miami, Tom Clancy’s Without Remorse, Beat Street, What’s Love Got to Do With It, and Do the Right Thing. Amazon also offers classic sitcoms like 227, The Jeffersons, Sanford and Son, Diff’rent Strokes, and more.

HBO Max, More Than a Month

The Warner Bros.–backed streaming service highlights films, documentaries, biopics, original programming, and animation that focus on the Black voices (in front of, and behind the camera) through a central programming hub titled, “Black Voices,” which will remain active and updated throughout the year. Watch celebrated documentaries like A Choice of Weapons: Gordon Parks, Frederick Douglass: In Five Speeches, Dreamland: the Burning of Black Wall Street, Oscar Micheaux: The Superhero of Black Filmmaking, or King of the Wilderness and original programming options like Insecure, Love Life, South Side, That Damn Michael Che, Lovecraft Country, Watchmen, David Makes Man, A Black Lady Sketch Show, The Shop: Uninterrupted, and Euphoria. Additionally, on February 3, the streamer will highlight the 2021 finalists of HBO’s Short Films Competition in partnership with the American Black Film Festival (ABFF): Cracked, Mass Ave, Pure, The Snakes, and When the Sun Sets.

Hulu offers a collection of content that runs the gamut from scripted series, reality shows, music documentaries, and original movies. The Craig Robinson–hosted Your Attention Please returns for its third season to “take us on a visual journey into the lives, ideas, and purpose of a diverse group of Black innovators and creators who are leaving their mark on the world.” The streamer’s large array of offerings includes films like The Hate You Give and Little Monsters, music-themed programs like FX’s Atlanta and Queens, sitcoms like black-ish and Abbott Elementary, dramas like Women of the Movement and Little Fires Everywhere, documentaries like Summer of Soul and Amazing Grace, and more.

The Mouse House’s streaming service is offering its Celebrate Black Stories collection, which features Questlove’s music documentary Summer of Soul, ESPN’s 30 for 30 doc. Deion’s Double Play, the first season of ABC’s reimagining on The Wonder Years, and the long-awaited premiere of original animated series The Proud Family: Louder and Prouder. Disney+ is also set to stream the ABC News Soul of a Nation installments: Screen Queens Rising and X / o n e r a t e d – The Murder of Malcolm X and 55 Years to Justice after they debut on ABC. Also featured on the streamer in February is Rise Up, Sing Out, a series of animated, music-based shorts geared towards kids, parents and caregivers, designed to be inspiring, empowering and optimistic about race, culture, community and celebrating differences, and Clotilda: Last American Slave Ship, which tells the story of the schooner that carried 110 kidnapped Africans to slavery in Alabama. It was the most intact slave shipwreck found to date and the only one for which we know the full story of the voyage, the passengers, and their descendants.

Paramount+ is celebrating with a slate of titles including comedies like The Ms. Pat Show, Key and Peele, and Chappelle’s Show; movies like Gemini Man, Shaft, and The New Edition Story; documentaries Dream Team, St. Louis Superman, and Black in Space: Breaking the Color Barrier; dramas The Game and The Good Fight; family favorites Sister, Sister and The Neighborhood; and more.

NBCUniversal’s Peacock streaming service will honor Black History Month with an array of original series like Bel-Air, the streamer’s dramatic reimagining of the Will Smith-sitcom The Fesh Prince of Bel-Air, and season 2 of its late-night offering, The Amber Ruffin Show. Other original series include Hart to Heart, For Ball and Country, Black Boys, and Anthony. On the comedy front, sitcoms like Kenan, The Bernie Mac Show, and Everybody Hate Chris will be a few of the hilarious offerings available. Movies like Selma, Bad Boys, The Drew, Home Sweet Home, and The Brothers, along with documentaries like The Sit In: Hаrry Belаfonte Hosts The Tonight Show, For Bаll аnd Country, My Pursuit: Life, Legаcy, аnd Jordаn Burroughs, and Freediа Got а Gun, among so much more, will also be featured.

BET+, More Than a Month

BET+ has filled its More Than a Month programming lineup with an assortment of titles, including the premiere of Real Husbands of Hollywood: More Kevin, More Problems, starring Kevin Hart, Nick Cannon, Nelly, JB Smoove, Robin Thicke, Boris Kodjoe, and Duane Martin. The streamer’s catalog of original shows includes The Ms. Pat Show, All the Queen’s Men, Tyler Perry’s Ruthless and First Wives Club and classics like The Jamie Foxx Show, Martin, The Wayans Bros, and The Parkers.

The cabler from Comcast and NBCUniversal offers a stellar collection of titles honoring the Black community’s contributions to American culture with movies, TV shows, specials, documentaries, and more on Xfinity’s Black Experience channel and on-demand. This is the only channel of its kind, endorsed by the African American Film Critics Association, the world’s largest group of Black film critics that gives annual awards for excellence in film and television. The platform will highlight emerging Black talent from the film festival circuit, featuring titles like Zahra and the Oil Man, Paris Blues in Harlem, Riverment, Twenty Pearls, and Civic Mind. From celebrating Independent Black Filmmakers to its Black History Collection (a 24/7 lineup that showcases historical stories and stories about history-in-the-making, featuring movies, specials, documentaries, TV shows, and more), to featured film content like Stomp the Yard, Poetic Justice, Higher Learning, and Spike Lee’s School Daze and Get on the Bus, the service has something for everyone. Free previews will be offered during February for TV One, Cleo TV, Aspire TV, Black & Sexy TV, The Africa Channel, AFRO, Kweli TV, and Revolt, as well.

ESPN+ is offering its Black History Always Collection to highlight existing and new content from ESPN and ESPN+ that highlights sports stories and content for (and about) Black athletes, fans, and communities. The streamer will feature ESPN+ Originals like docuseries Why Not Us and More Than an Athlete; a 30 for 3o doc slate including Breakaway, 144, Deion’s Double Play, No Crossover, Rodman, You Don’t Know Bo, The Fab Five, Winning Time, Vick, The Best That Never Was, The Announcement, and Run Ricky Run; the Oscar-winning series, O.J.: Made in America; and Black History Always specials like A Love Letter to Black Women, We Are All Jackie, Bearing Witness A Portrait of Darnella Frazier, Finding Free, Monochrome, Sole Survivor, Rhoden’s HBCU Road Trip, I Run With Maud, and Long Live Seven.

The streaming service will be celebrating Black icons from directors, actors, and musicians to historical legends, all throughout February. The platform’s Black Cinema channel will feature a new movie each day at 8 p.m., showcasing Black storytelling and artistry. Pluto TV Documentaries and Pluto TV History will showcase informational titles like I Am Not Your Negro, Michelle Obama: Hope Becomes Change, Obama: Building the Dream, Jackie Robinson My Story and Muhammad Ali: The Greatest. The programming offerings will extend, as well, to the channels: BET Her, Showtime Selects, and BBC Kids, while the Pluto TV Music category will pop off throughout the month with music from Black artists who have contributed to the culture and continue to elevate the musical landscape.

ALL NEW: Halle Berry, Tessa Thompson and so many other incredible Black actresses in Hollywood speak their truths.
#SoulOfANation Presents: ‘Screen Queens Rising’ – premiering Thursday night at 8|7c on @ABC and stream on @Hulu. pic.twitter.com/L3K2sgaL5P

The Proud Family is louder and prouder and FINALLY coming back to your screens! 💜 The Proud Family: #LouderAndProuder, an all-new Original series, is streaming February 23 only on #DisneyPlus. pic.twitter.com/quZhojHv24