Here's Everything We Know About Season Four of Arrow

Arrow is back in October with season four and Rotten Tomatoes got a chance to chat with writer/producer Marc Guggenheim about what we’re going to see. We learned about a certain familiar character who will appear in flashbacks this season, plus more about the big bad. Magic is going to be introduced in season four with the appearance of Constantine (Matt Ryan), fresh off his canceled show, and Guggenheim tells us how that’s going to work. We also talk about that infamous tweet featuring Green Lantern’s home town, the return of Donna Smoak (Charlotte Ross), and whether or not Diggle’s (David Ramsey) codename is one we might recognize. Check out the seven things we learned below.

THE FLASHBACKS ARE A BIG SECRET, BUT WE’LL SEE A FAMILIAR FACE 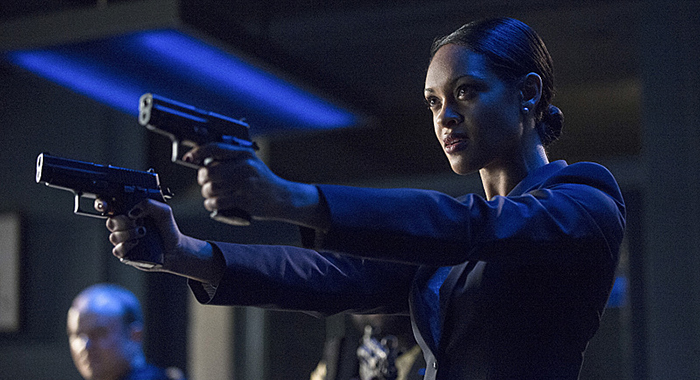 Guggenheim told us that, though he’s keeping most of the flashbacks close to the vest this year, we are going to see someone we know in the first episode of the new season. “You know, I’ll tell you, the flashbacks are probably one of the more secretive aspects of the season this year, so there’s not a whole lot I can talk about with respect to the flashbacks,” he said. “I will say that Amanda Waller [Cynthia Addai-Robinson] will be making an appearance in episode 401, so that’s a new bit of information.” 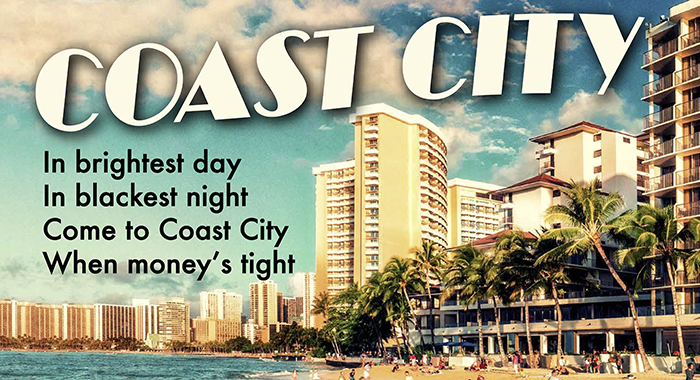 Guggenheim recently tweeted a picture of “Season 4 production art” with a travel poster for Coast City, the home of Green Lantern, with the words, “In brightest day, in blackest night, Come to Coast City when money’s tight.” We asked him about it and he said, “You will not be seeing Hal Jordan in the flashbacks, I’m sorry to say.” So much to unpack there. Will we see another Lantern? Is this an Easter egg? Will we see him in present day? Guggenheim stayed mum on the subject

DAMIAN DARHK IS NOT THE ONLY VILLAIN IN SEASON FOUR 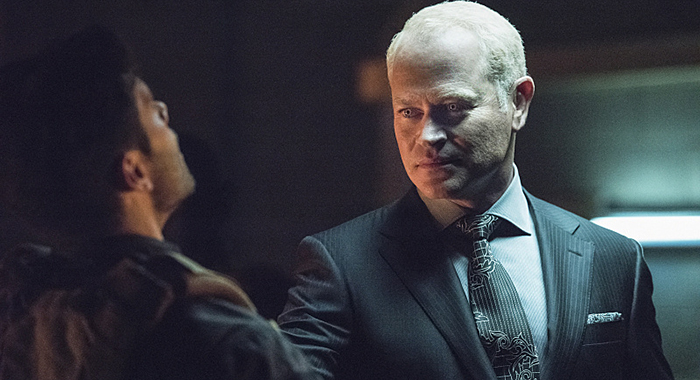 Damian Dark (Neal McDonough) is the main villain of season four, though he’s not the only one. Guggenheim told us a bit about what we’re going to see. “Damian’s our big bad of the year and, basically, he is part of this organization called H.I.V.E., which is kind of like a highly covert shadow organization,” he said. “The fun of season four is that we really hit the ground running right from the premiere. You meet Damian. You’ll get a sense of what he’s up to, certainly — what his master plan is — something that is going to be an ongoing mystery during the course of at least the first half of the season. We’re really excited to also be doing a whole organization of villains, not just one person.” 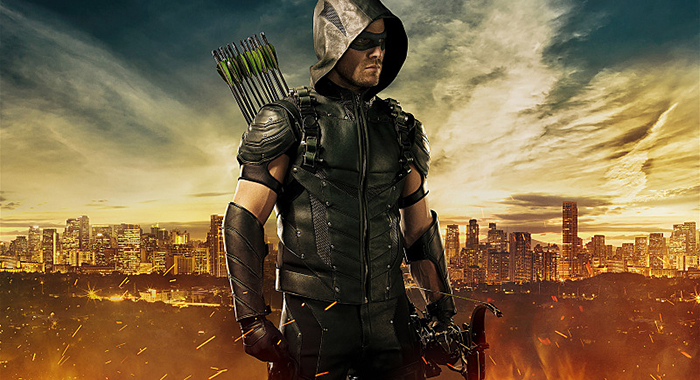 Guggenheim talked about introducing magic and the supernatural into the Arrow universe this season. “I would say, so far, it feels pretty organic from our perspective. I think that’s for a couple of reasons. In respect to the world of magic, I think that’s something that lives within the world of Arrow probably a lot easier than superpowers. We’ve already introduced superpowers into the world, so certainly once you’ve seen superpowers on Arrow, it’s a little bit easier. We’ve also laid the foundation for mysticism last year, not just with the Lazarus Pit, but also with Oliver’s [Stephen Amell] comment to Ra’s al Ghul [John Barrowman] that he’s seen some things in the world that can’t be explained.” 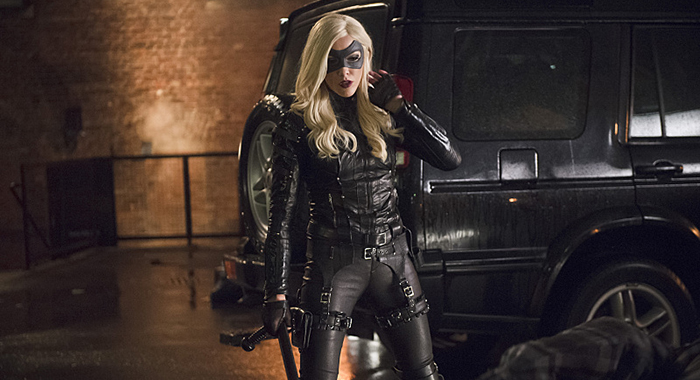 We asked Guggenheim why Arrow gets female superheroes right when a lot of other shows and films don’t. He said, “We’re really proud of our strong female characters on the show… I don’t really know why people get it wrong. All I can really speak to is our approach… First of all, it helps to have an amazing cast. We really have been very fortunate. All the women in our cast, both past and present, even if they’re not ‘superheroes,’ they’re all really strong women. These actresses are a really formidable presence on screen. They really hold the screen. That helps enormously. It’s great to be able to start there.

“Once we put them into sequences and put them in masks and costumes — quite frankly, our approach to them is the same approach — the same way we approach the male superheroes. We don’t really make the distinction on the show, ‘Well, this is a female superhero and this is a male superhero.’ They’re just superheroes. [That’s] our approach — from writing them to the costume design to the props — for all the pieces that go into it. We have a process for how we do these characters. It’s no different for the women than it is for the men. That’s in large part the reason for our success. We’re approaching it with a very gender-neutral eye because it’s not about gender. It’s about making these characters as cool and compelling as possible.” 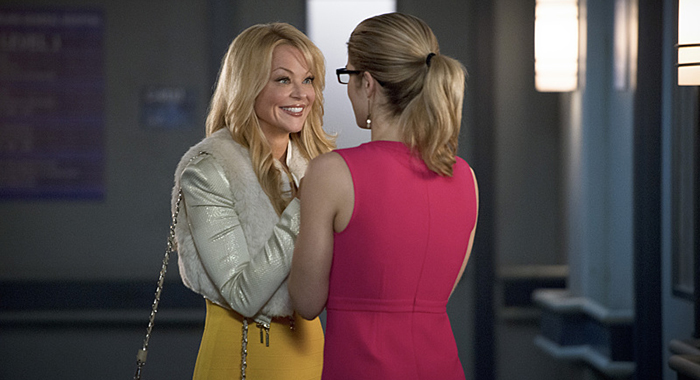 Last season we met the mother of Felicity Smoak [Emily Bett Rickards], Donna Smoak, and watched her give advice on taking the next step with Oliver. Donna is back this season and Olicity is now official. Guggenheim talked about what we’re going to see from her. “It’s so much fun to see Donna’s reaction to Oliver and Felicity being together. I would say that’s part of Donna’s charm; she’s a little bit like a Greek chorus. She’s the ultimate Olicity supporter — the ultimate Olicity ‘shipper.’ The episode where she returns is going to be really interesting because Donna is — let me put it this way: she has a surprising relationship with Oliver. Her interactions with Oliver are not what I think the audience is going to expect. And certainly not what Felicity expects.”

DIGGLE IS GETTING A CODENAME AND WE MAY RECOGNIZE IT

Diggle is getting a uniform in season four, and we also know he’s going to have a codename. Diggle is a character who was created for the show and was later added to the DC Comics universe, however, we may just recognize the codename. Guggenheim teased the information, saying, “I’ll tell you this: he will be getting a codename later in the season. I kept trying to find an organic place to do it in. That said, you know, the name is going to be familiar and unfamiliar. The one thing I want to make very, very clear is that — and I’ve said this with interviews in the past about Diggle — is that Diggle is his own character in the DC Comics universe. So he’s not going to be called Guardian. He’s not going to be called Vigilante. He’s not going to be called Batman. He will have a codename, a name that’s not completely unfamiliar to fans of DC comics, but at the same time, I think it will be very clear that there is no indication that we’re turning him into a specific DC character. “

Arrow will return to The CW with its fourth season on October 7 at 8 p.m.