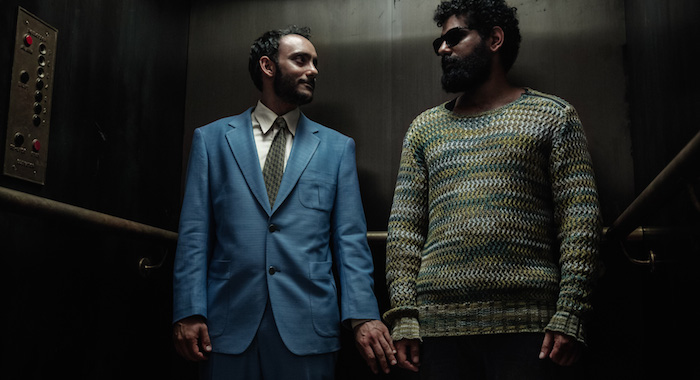 Spoiler warning: The following includes plot details from season 1, episode 3 of American Gods, as well as a discussion of adult themes.

The first penises appeared at full mast in episode 2, “The Secret of Spoons”: the first, in a sext that Shadow Moon (Ricky Whittle) finds on the phone of his cheating wife, Laura (Emily Browning) — an image that he subsequently has trouble shaking. The second  shows up on Joel Murray as Paunch, who floats, ecstatic, in the celestial womb of love goddess Bilquis, a visual preceded by twinkling strains of Bob Dylan’s “A Hard Rain’s Gonna Fall.” 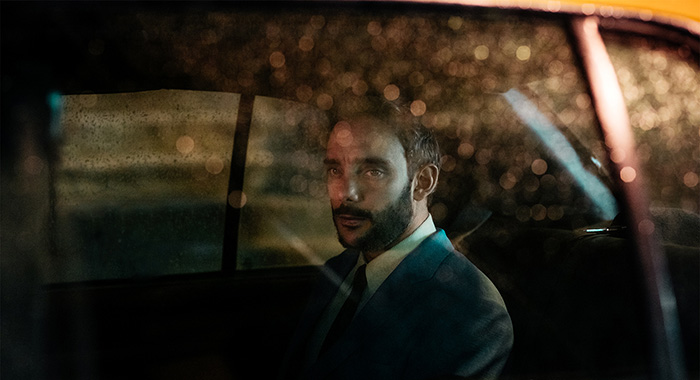 Fans this week met Salim (Omid Abtahi), a salesman having no luck getting meetings in America. He hails a fortuitous cab driven by a Jinn (Mousa Karish), a misunderstood supernatural creature  who feels just as invisible because modern humans — particularly those jaded New Yorkers — have little interest in the brand of mythology he’s selling.

Salim and the Jinn share a passionate sexual encounter, which expands on a scene in the book in which Gaiman describes oral sex between the two. In its Starz incarnation, American Gods shows a gay love scene the likes of which audiences rarely get to see.

“We started talking about who Salim is and what his life as a gay man in the Middle East would be, particularly coming from a place where you’re thrown off rooftops for being homosexual,” Fuller said, elaborating that the character’s experiences were probably limited to oral sex in back alleys.

“The Jinn is giving him a different kind of sexual experience: pulls him up from his knees,” Fuller continued, “and starts kissing him, because he wants him to have a happy, healthy sexual experience that he, at this point in his life, has been denied.”

The scene had to be filmed twice, but not because it was too explicit the first time. Getting the sex right was vital, because without that, the Jinn effects would be meaningless.

“We had two straight actors and a straight director and positions that were unlikely to have successful penetration,” Fuller said.

The final scene shows the Jinn on top of Salim, and the couple lying side by side. The first go-round apparently was too ambitious.

“Watching it the first time, I think [Fuller] said, ‘Unless he has a 12-inch candy cane c—, that’s not going to work,’” Green said. “For me as a straight man trying to help produce it, it was learning that there are a lot of specific things that straight directors, producers, writers might think they know that they just don’t. To portray something correctly for an audience that doesn’t get to see as much for them done well, it’s important to get it right, so we made the effort.”

American Gods shows Karish dropping his towel, as well as the Jinn’s true naked form, which was a computer generated visual effect. When it came to the CGI, it turned out size did matter.

“There were some fun adventures in terms of selecting penis sizes,” Fuller shared. “The more potty humor biofunction comedy of a post-production process was definitely getting its fill of suppressed giggles because we were looking at giant penises and trying to calibrate what the Jinn’s penis would look like. What’s too big? What’s not too big. If you start to giggle when he drops the towel then that’s too big.”

Or as Green put it: “What is majestic and still plausible?”

Hopefully, viewers were wrapped up in the drama of Salim’s romance, not giggling at the naked Jinn. Starz was supportive about presenting the Jinn scene authentically, even if it meant graphically.

“At no point was there ever any creative limitation on it,” Green said. “Network, studio, internally, everyone treated it respectfully and didn’t want to pull any punches. I think the only restriction we were given was we were asked to not show a full mast erection on the way to a sexual encounter, and that’s not gay or straight.”

Salim will appear again on American Gods. He’s not only a gay man of color, but a gay man of faith too, Green said.

“Interestingly enough, he’s probably the most traditionally religious of any character we have in the show,” Green said. “He believes in one of the big three religions and practices it as best he can on a day-to-day basis. As you’ll see, he prays five times a day to Allah, which he sees as a completely separate thing from his sexuality, because I believe that he believes that Allah created him and therefore they have a good relationship.”

Fuller and Green also made an LGBT-friendly addition to Bilquis’ (Yetide Badaki) story. Who could forget Bilquis? The goddess of love swallowed a man sexually the first time she was ever on screen. Episode 2 showed that Bilquis’ conquests included women, too, something that did not occur in Gaiman’s book.

“We wanted to make sure that she was going to be representing a sex positivity despite what ultimately happens to her suitors,” Fuller said. “Although there’s an argument to be had when you see what happens to them that it’s not quite so bad.”

Badaki certainly goes all in for those scenes. They’re bigger than just American Gods, Fuller explained.

“The interesting thing about Bilquis and the filming of those sequences really was casting Yetide Badaki, who is a Nigerian woman who was raised in a fashion that does not acknowledge or celebrate female sexuality,” Fuller said. “To hear her story as an actress who’s then coming to portray this goddess whom sex and sexuality is how she feeds, but it is also a powerful expression of a woman owning her sexuality in a really cinematically aggressive way.”

Bilquis ingesting her lovers, created in a post-production process similar to the Jinn scene, is a sight that could also make viewers giggle, so Fuller and Green paid careful attention to make sure viewers could take the Bilquis scenes seriously.

American Gods airs Sundays at 9 p.m. on Starz. Watch our video interviews with the cast here and read our full interview with Fuller and Green.