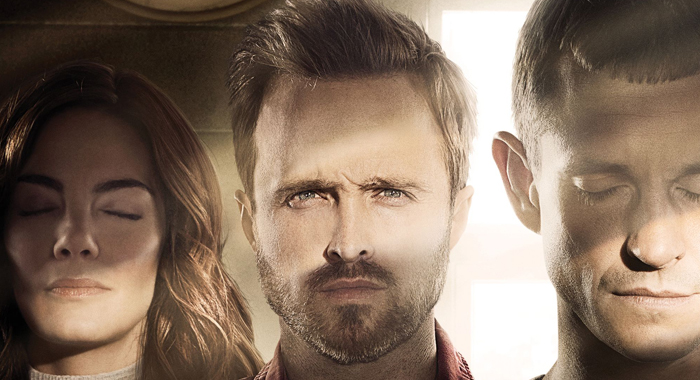 If you’re not watching The Path, Hulu’s latest original offering, you’re missing out on some wacky, must-see stuff.

You’re missing out on Aaron Paul, the Emmy-winning co-star of Breaking Bad and current star of those silly T-Mobile ads where he plays a binge-watching support-group facilitator with a knack for getting way too intense. You’re missing out on Hugh Dancy, formerly of Hannibal, as a wannabe prophet who bugs the hell out — panting, breathing heavily, spazzing out, the whole nine — when he receives oral sex from a love-struck follower. You’re missing out on Michelle Monaghan, once again staking her claim as the go-to gal for playing women in weird love triangles, as she’s caught between Paul’s secretive husband and Dancy’s charismatic philosopher. It’s practically a replay of her performance in the first season of True Detective, when she was the woman caught between Woody Harrelson’s secretive husband and Matthew McConaughey’s charismatic philosopher.

Yes, The Path is that kind of show, a usually straight-faced melodrama occasionally punctuated with bursts of bonkers behavior. Set in an upstate New York commune covered in foliage, The Path centers on a “movement” of people who believe their way of living will keep them on the road to peace and salvation, especially once the world goes all to hell. Usually pigeonholed as a cult full of harmless hippies (“Aren’t they just a bunch of Deadheads?” one outsider asks), these folks are plagued with personal issues. Paul’s character, Eddie, begins to question the movement and its mission once he returns from a revealing trip to Peru, where’s the movement’s leader (played by 2001: A Space Odyssey star Keir Dullea) lies comatose. Unable to express his suspicion that the whole movement is a sham, he becomes increasingly dodgy and distant, leading his wife to believe he’s having an affair. (She thinks he creeped around on the trip with a wild child played by guest star Minka Kelly.) Meanwhile, Dancy’s messiah-in-training Cal prematurely becomes the de facto leader, vowing to take the movement into the new millennium by appearing on TV shows, where his preaching can be heard loud and clear. But this dude, a recovering alcoholic with a short fuse and a hellion for a mom (Kathleen Turner!), also has some baggage he’s having trouble unloading.

Created by playwright Jessica Goldberg and executive produced by Jason Katims (Friday Night Lights), The Path basically shines a sympathetic light on those who live life in alternative circles. While the show’s characters might follow a hippy-dippy faith, speaking in out-there jargon and shorthand that’ll certainly have you wondering if they’re taking obvious potshots at Scientology, the show’s overriding point is that these people are still people, dammit!

If you wonder why you haven’t heard more about The Path, especially since it’s a drama starring three vets of recent, critically acclaimed prestige television series, there’s a good reason for that: it’s on Hulu. (I recently did a search of The Path on Twitter and saw people used the two words more as sentence fodder than referring to the actual show.) It appears the streaming TV-on-demand platform is still not known for delivering top-notch, original content, even though they’ve been going all out to prove it can churn out shows featuring big-name talent. Earlier this year, the service made a big deal out of 11.22.63, the J.J. Abrams-produced miniseries adaptation of Stephen King’s time-tripping novel, with that rebellious workaholic James Franco as an English teacher who goes back in time to stop the JFK assassination. But even its considerable star power and good reviews weren’t enough to create much buzz.

It’s not that Hulu’s programming is awful — their original shows are watchable, if not exceptional. If anything, some of Hulu’s programming feels like somebody decided to take a movie and create a TV spinoff from it. The daffy cartoon show The Awesomes has co-creator/current Late Night host Seth Meyers leading a group of bumbling superheroes (Rashida Jones and SNL vet Kenan Thompson voice a couple of them) looking for respect. If this sounds familiar, it’s also the plot of the 1999 superhero comedy Mystery Men. Meanwhile, the dramedy Casual, starring the continually undervalued Michaela Watkins as a single mom keeping tabs on a sexually active, teenage daughter (Tara Lynne Barr) and a layabout brother (Tommy Dewey), may seem to some like a TV version of the Laura Linney-Mark Ruffalo indie You Can Count on Me. Even The Path sounds like somebody saw Martha Marcy May Marlene and said, “Hey, let’s make a show about a cult!”

Most of Hulu’s comedy programming (which outnumbers Hulu’s dramatic shows) might certainly have you wasting the day away if you choose to binge on it. Before he became the late night king of carpool karaoke, James Corden co-wrote and starred with his Gavin & Stacey co-star Matthew Baynton in The Wrong Mans, a highly addictive BBC/Hulu production where he and Baynton played nobodies thrust into a web of danger and intrigue. If reality-show satire is your thing, Hulu also has The Hotwives, a deliciously absurd take on Bravo’s Real Housewives ecosystem, with Casey Wilson (Happy Endings), Angela Kinsey (The Office), and others assuming the roles of high-maintenance divas starting drama in whatever city they’re in(first season was set in Orlando, the second in Vegas) they’re in. And the Amy Poehler-produced Difficult People, with podcast queen Julie Klausner (How Was Your Week?) and Billy on the Street’s Billy Eichner as pals/pop-culture junkies who care more about how they’re perceived on social media than in real life, is a tart, snarling commentary on our self-centered, online culture.

Unfortunately, like most streaming-TV platforms slinging out content, Hulu is cowering under Netflix’s behemoth shadow. Earlier this month, a Morgan Stanley survey proclaimed Netflix as the spot for the best original content by American consumers, knocking HBO off its prestige-TV throne. Twenty-nine percent of those surveyed said Netflix had the bomb programming (HBO came in second at 18 percent), while Hulu shared third place with Showtime and Amazon at between four and five percent. And considering that Netflix will spend $5 billion on new shows in 2016, their original programming will only get more massive. Also, unlike Netflix, Hulu doesn’t release seasons of original shows all at once. It still follows the weekly appointment-TV model of broadcast programming, which might be a turnoff for all the bingewatchers out there.

However, while Netflix has the original-programming game locked, a report by Wall Street firm Cordcutting declares that people flock to Hulu overall for original content from other entities, both broadcast and cable. Not to mention that Hulu is also trying to snatch up Netflix’s title as the top streaming-movie provider, offering more and more film titles by the day. So, at the moment, Hulu is working on killing it as a video-on-demand platform, giving viewers everything under the sun as well as original content. But you shouldn’t sleep on that content. It may not be serving up Jessica Jones-level bangers just yet, but if the wicked, wackadoo The Path is any indication, it’s on the right — well, you know.