Although you might not expect a show like What If…? to answer questions – its anthology format is meant more to suggest scenarios than to linger on them – the first season finale tied up a number of ends that would be considered “loose” on another show.

Sure, there may be a handful of bigger puzzles left to solve, like whether or not the Watcher (Jeffrey Wright) will turn his gaze to the mainline Marvel Cinematic Universe or if any of the characters we met in the last nine weeks will filter into Loki’s second season. But director Bryan Andrews and head writer A.C. Bradley offered Rotten Tomatoes additional clarity to some of What If…?’s answers, and teases, when we spoke to them shortly after the final episode streamed on Disney+. From visual cues to Mephisto never quite emerging, we took a closer look at What If…?‘s first finale.

Spoiler Alert: The following contains details about episode 9 of What If…? season 1. Stop reading here if you have not watched the episode.

1. The Visual Impact of Kirby Krackle 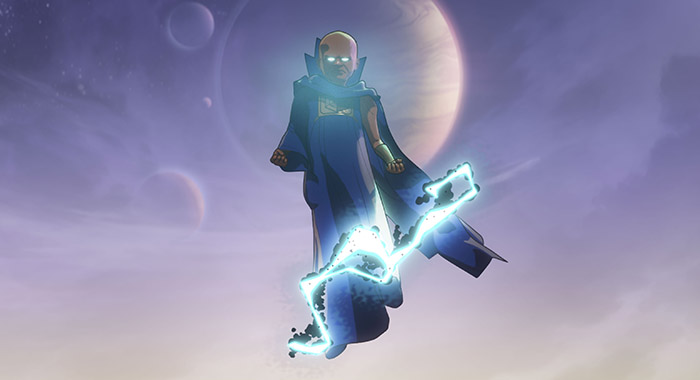 One of the great visual nods to Marvel Comics was the appearance of “Kirby Krackle” in the last few episodes. The distinctive energy discharge, with its floating dots embedded in negative space, was one of the great innovations Marvel Comics architect Jack Kirby brought to the medium. And yet, somehow, it has been missing from Marvel Studios live action efforts – an absence Andrews sought to remedy.

“I’ve been working on the Marvel movies forever and I would draw it into my storyboards regardless,” he said. “I think they could be doing it in live action and have it look really, really cool. I don’t know why they haven’t.”

When the opportunity to spearhead the visual look of his own series presented itself, Andrews made sure to include Kirby Krackle.

“I think the response has been pretty awesome for something as simple as how the magical power looks,” he continued. “That stuff’s been around since the ’60s, if not before. Kirby is amazing, an icon, and has done so much. And to get that back in there, bring it back to Marvel, and see it move the way I’ve seen it move in my head since I was a child, it was very fun, cathartic and exciting to do. I’m glad people are [responding to it] positively.”

2. Assembling the Guardians of the Multiverse 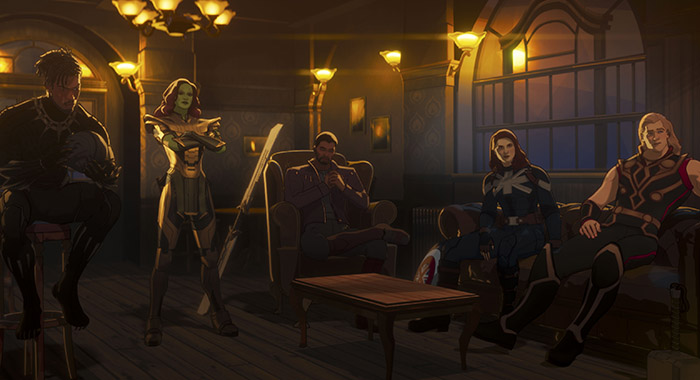 While What If…? treated itself as an anthology series with stories in disconnected universes, Bradley said the idea of having The Watcher interfere “like the dramatic mofo that he is” was an eventuality “since day one.” Soon, the threat of Ultron presented itself in story discussions and since the show is a Marvel production, building a team became the natural conclusion.

“As we were cracking the stories, we were like, ‘OK, who’s landing close to home? Who are we loving so much that we need to see [again]?’ Obviously, Peggy Carter and Star-Lord T’Challa,” she said.

That advance planning led to the inclusion of Gamora (voiced by Cynthia McWilliams), whose episode was pushed to season 2 for “COVID production reasons,” according to Bradley. The tantalizing notion that Gamora defeated Thanos and rid her universe of the Infinity Problem should lead to an interesting story. And even though the episode was delayed, Bradley said the “surprise” affection the production team had for that version of the character made her a natural addition to the Watcher’s team.

And as for the more ambiguous members of the team?

“Dr. Strange was always such a tragic character. We weren’t too sure how he was going to play into the bigger story, but it’s the first hero — or villain, depending on how you look at him — that The Watcher interacts with,” Bradley said. “Same with Killmonger. We knew we wanted to revisit that world, give it some resolution and see him again.” Killmonger’s world is safe now, but What If…? viewers know Killmonger’s situation has changed immensely … possibly even into the darkest of Marvel’s corners. 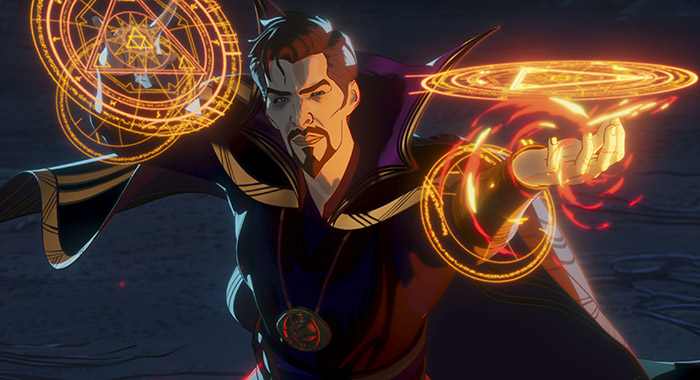 Allowing the stories to enter darker terrain — the end of all things in some cases — was not only a way of honoring the comics, but a deliberate story choice to facilitate the creation of the Guardians.

“The fun and the challenge was taking these different stories, these characters that are literally spread across a Multiverse, and finding a way to connect them,” Bradley said. “As we were crafting individual episodes and telling the stories, it was a mixture of wanting to pay respect to the original comics, where it was always the darker [ending], but then also knowing and hoping as we approach the finales, that we would have a chance to see these characters and see these worlds again and give a bit of resolution.”

As one key example, Ego’s (Kurt Russell) appearance at the end of the Star-Lord T’Challa episode certainly suggests bad things for planet Earth, but the Watcher’s subsequent return to that reality revealed T’Challa (Chadwick Boseman) changing the course of events.

“[Ego’s] not going to of win this fight if he’s going up against not only the Ravagers, but the Wakandans. So we wanted to leave audiences with that was a cliffhanger. But if you think about it, and when you see it in episode nine, Ego doesn’t stand a chance,” Bradley said.

“Some of those cliffhangers don’t necessarily mean instant doom for the entirety of the universe,” Andrews added. “But it’s a way of showing the book isn’t closed. There’s an open-ended chapter, hinting to the fact that these universes are ongoing, on-living, whether you’re watching them or not. And those little teases, twists, and things help speak to that. They can [end] positively, but they could continue poorly.”

In terms of continuing these alternate realities, What If…?’s stinger scene definitely suggests certain things and speaks to both the positive and negative possibilities in the Multiverse. Peggy (Hayley Atwell) could soon be reunited with Steve (voiced by Josh Keaton in the series). But at the same time, Peggy was literally plucked from her universe at the beginning of “Captain Carter and the Winter Soldier,” which means Steve could be taking Bucky’s place in those events.

But even if that is the case in season 2, the stinger serves as sweet, hopeful button to Peggy’s journey in season 1. And it even proved to be a surprise to Marvel Studios executives. According to Andrews, Marvel President of Physical Production and What If…? executive producer Victoria Alonso saw scripts and storyboards of the scene long before production, but still let out an audible “chirp” of glee when seeing the completed footage at the final sound mix.

“We got her even though she had approved it,” he said.

As for the possibility of seeing more from that stinger, Bradley said, “I always feel like in the Marvel Universe, if you do a post-credit scene, it’s a promise.”

On a more personal level, though, she wants to continue telling stories of Captain Carter just to see her “hanging out with her BFF, Natasha Romanoff, in this world.” 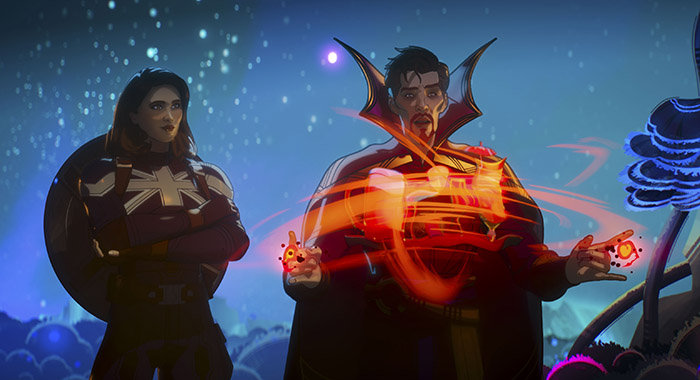 From the moment Marvel Studios moved into episodic television, fans have been on high alert for Mephisto. The Marvel Comics devil seeming lurks inside every cat, disused castle, and shadow in the Disney+ corner of Mutliverse. So, naturally enough, some would suspect the Dark Strange of What If…? might be some form of the character. But Andrews maintained Strange’s demonic resemblance was just a case of visual serendipity and, perhaps, a by-product of taking that cloak from Beelzebub.

“He absorbs a dragon, he absorbs [these creatures and] temporarily he is that thing, because those things truly are inside of him,” he explained. “And so, he gets their abilities, he gets all of that stuff. And they’re just ready at the fingertips. So, we get that hybrid look where he has the horns and looks very devilish. It’s so funny how everyone’s like, ‘He’s Mephisto.’ It’s like, wait, but it was just a dragon!”

The creatures he absorbed also play crucial roles in the fight against Ultron – note the way Peggy recognized those Shuma-Gorath-like tentacles – and Andrews said there are one or two Easter Eggs in those moments which will reveal a few extra characters Strange absorbed off screen. If you willing to freeze-frame the sequence, of course.

6. The Key Theme of Team-Ups 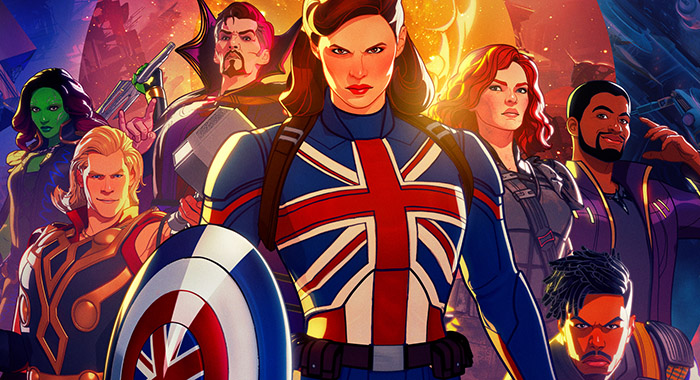 As in the Infinity Saga, it seems the only way to defeat a powerful, but singular fanatic is with teamwork. Asked if that’s the overall key theme of Marvel’s mythology, Bradley said the key takeaway is “you can’t do it alone, nor should you do it alone.”

“That’s also true when it comes to making movies and TV shows. I mean, if we want to do it alone, we would become novelists,” she continued. “And I think our world, we’re slowly learning that lesson. The last two years have kind of taught us that we need to start working together. It’s the only way we’re going to overcome this pandemic. It’s the only way we survive is if we have each other’s backs.”

“We love stories of the singular hero or heroine. It’s like amazing. And they do their job. And that’s awesome. There’s plenty of room for that,” Andrews added. “But sometimes there’s things that come that are bigger than that. And you got to join up. Who doesn’t love a good team-up?”