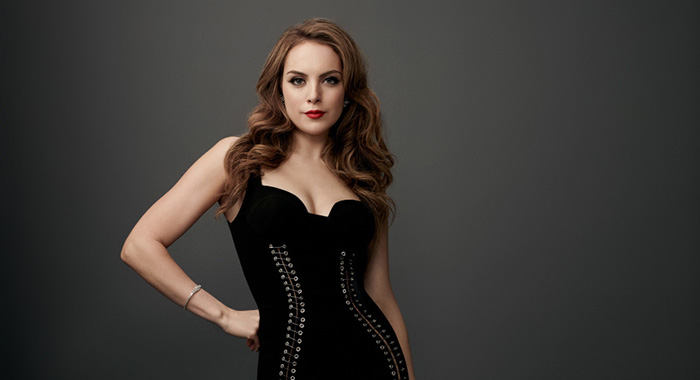 Fallon Carrington is a new woman — literally. The CW reinvented the oil heiress played by Pamela Sue Martin in the classic ’80s nighttime soap Dynasty, along with the new Carrington and Colby families.

On the 2017 Dynasty, Elizabeth Gillies plays the character, who is still the daughter of Blake Carrington (Grant Show), but the family business is now Carrington Energies, expanding the company into the modern era of alternate energy sources. Blake passes Fallon over for a COO job, preferring instead to hire his son Steven (James Mackay). Blake has also announced his engagement to Cristal Flores (Nathalie Kelley), which is a shock to both kids.

The Sex&Drugs&Rock&Roll and Victorious star spoke with Rotten Tomatoes and shared eight elements of the classic Dynasty that get an upgrade for 2017.

In the ’80s, Dynasty was famous for its catfights, so the new Dynasty gives the fans what they want in the very first episode. Fallon and Cristal go at it.

This isn’t just a slap fight. Fallon can throw a punch, and Gillies suggests this was not the first fight she’s been in

“No, I think she was quite scrappy in school,” Gillies said.

And what better place to throw down than at a wedding, with Cristal in her wedding dress? There will be more catfights, so tune in every week. Gillies and her costar enjoy the action.

“It’s like the catfight is a cherry on top of every episode,” Gillies said. “We don’t fight in every episode but Natalie and I enjoy it. We think it’s funny. We were hesitant to at first but then we got into it and we had the time of our lives. It’s fun to watch, especially if you’re in gowns.” 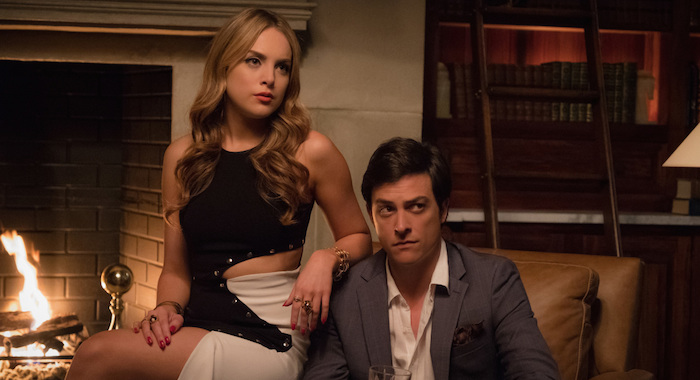 Even without the COO title, Fallon is a leader at Carrington Energies. Not only is this a family empire, but it provides a vital resource for the world.

“I always say I think I can do anything, but this is a little heavy even for me,” Gillies said. “Fallon thinks she can. I think she can handle it. I just don’t think it’s going to come to her as quickly and easily as she thinks it can. It’s going to take a lot of work, but I know that she will get there.”

In a board meeting or in the field, Fallon can talk to anyone as an expert in various energy methods. Gillies is doing as much research as she can, but fortunately, the writers give her the big words Fallon uses to smack down any competition.

“I struggle with it,” she said. “I’m doing the best I can. I definitely have learned more than I did. I’ve said the words like ‘wind turbine,’ ‘thumper trucks,’ everything solar, and ‘fracking.’ It’s a lot of terminology that I’ve learned more about. I’m getting better. Fallon knows a lot. I know most of it.” 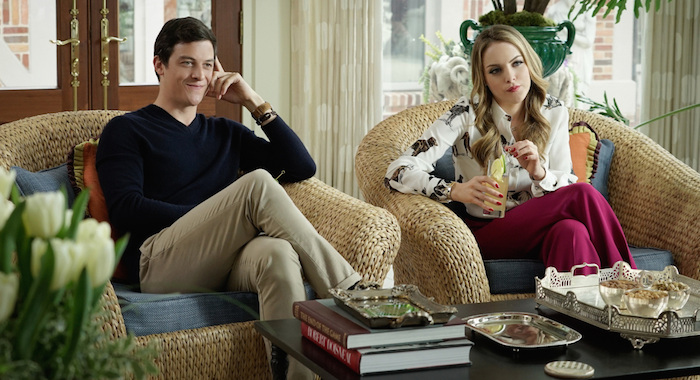 Everything’s gotta be bigger in 2017, so the new Carrington estate is even more vast than the manor that opened the original series’ title sequence. The house adds a few hours to your average day. You have to factor in getting from one end to the other.

“By the pool versus in the study, that’s a good 10-15 minute walk,” Gillies said. “Imagine that in your house. Like, ‘I’ll be up the stairs in six minutes, because that’s the fastest I can get there ever.’ A little silly, but the house is beautiful. We’re thankful to have it. It’s stunning.”

The set is even bigger because they’ve opened up the rooms even further. It’s a fun place to work, but Gillies wouldn’t want to live there.

“I’d be happier in a cottage,” she said. “Honestly, it’s so funny because for so many people it’s probably a dream. For me, I like cozy. I like small. If I scream, I would hope that the other person can hear me in the house. I would never need a house that big.” 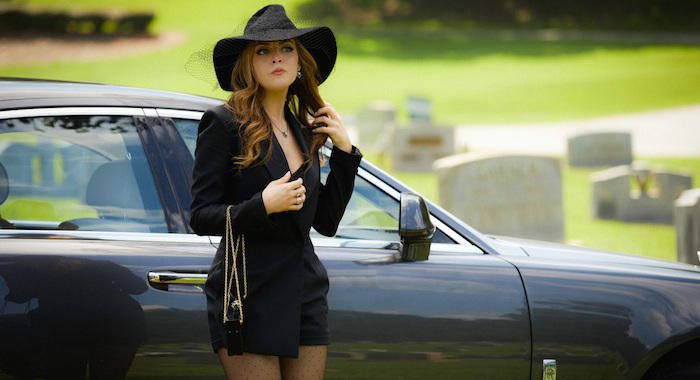 Joan Collins, Linda Evans, Heather Locklear, and Martin wore sparkling gowns of the ’80s on Dynasty. Fashion today has given Fallon Carrington an even flashier wardrobe to choose from. Just look at what she wears to breakfast.

“To a breakfast scene I wore a kimono with a gold dragon and fur sleeves, feather shoes and a turban, just to breakfast,” Gillies said. “That’s what I love about her: She truly dresses for herself. If she knew no one was going to see her that day, she wouldn’t wear sweatpants and a ponytail. She’d be in the same five-inch heels and furs she’d be in anyway.” 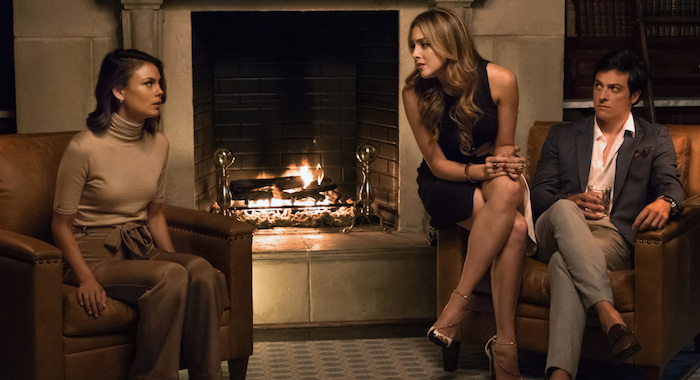 You can’t have high fashion without shoes. The red Christian Louboutin shoes Fallon wears in the pilot would make Carrie Bradshaw jealous, but that’s where Gillies suffers the most for her art.

It shows how badass Fallon is that she can walk all over town in those brutal shoes without wincing. You can’t pin Fallon down. She’s always on the move, which makes walking in heels a contact sport.

“I’m always walking,” Gillies said. “She never is relaxing in any scene. She’s always walking, she’s always on the move. These shoes are brutal. My feet have gotten to the point where I almost need to wrap them before I put them in the shoes. It seems the more expensive, the more beautiful they get, the more they kill my feet. They’re more delicate, so they cut a little lower. They hurt, man, but they’re cool.” 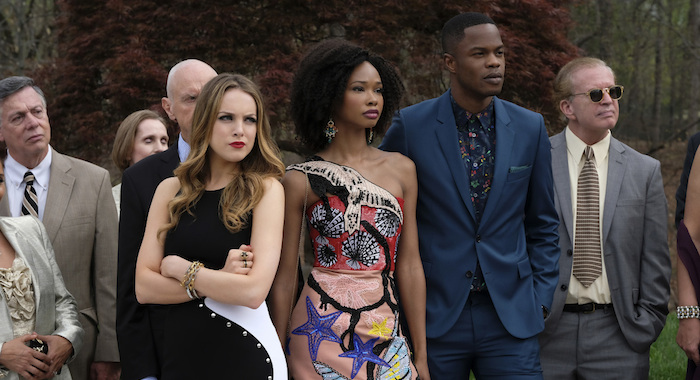 You don’t make that much money without dealing with a lot of drama. Fallon is at the center of it, caught between Blake and Cristal.

“Crystal is the latest and greatest setback I believe,” Gillies said. “I think Fallon truly believed the position of COO was going to be hers. Crystal, from the moment she arrives, she’s just a hurricane in Fallon’s plans. She really throws a wrench into the whole thing so now she has an even larger obstacle. It’s set her back with her father so it threw the whole thing into a tailspin so she’s got a lot of work to do.”

The drama in the boardroom bleeds into the family drama, and the Carrington family dysfunction makes business meetings awkward, to say the least.

“I think certain arguments, certain disagreements outside of the boardroom can certainly make their way into the boardroom and make for a very unsteady work day as manifested in many a scene so far,” Gillies said. “Yes, it all impacts each other.” 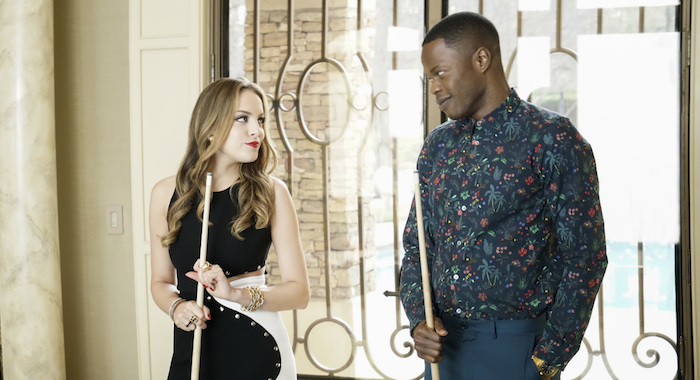 When you’re a Carrington, you’re used to getting everything you want. That might make it fun for audiences to see them squirm, just a little. Fallon will never stop though. Being a working actress, even Gillies has learned to let things go if an audition goes poorly or some other career disappointment.

“I don’t think Fallon believes in ‘not meant to be,’” Gillies said. “I think whatever she wants is what’s meant to be and that’s what needs to happen. We’re different in that way. After enough rejection, you begin to tell yourself there’s a greater force meant to be. I don’t know if I believe it, but it’s what I say to help me sleep at night.”

Running an energy business is pretty heavy in the first place. Then you add corporate backstabbing and family drama and Fallon sort of has to have a “never say die” attitude.

“She’s extraordinarily confident,” Gillies said. “I am goofier in real life. I am confident, but I have my moments of anxiety and weakness. She’s a tough broad. She’s strong. She does not fumble. I have to be on my A game when I play her because there’s no room for error. If I mess up then she messed up and that wouldn’t happen.” 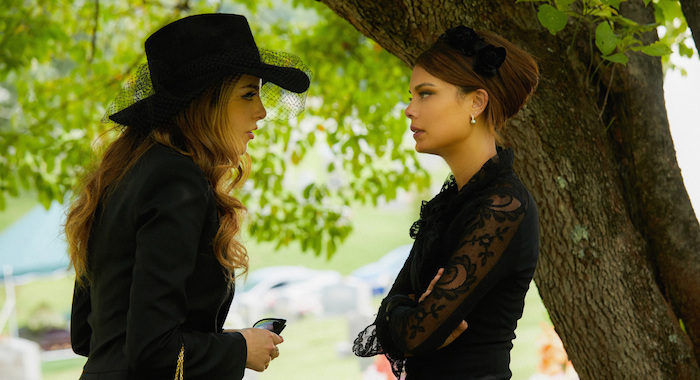 The men ran the company on ’80s Dynasty, but it was all about the women. Now that business has hopefully evolved in 30 years to be more inclusive of women, new Dynasty can address some of the struggles women overcome in the workplace, beginning with Blake himself.

“Perhaps, if she were a man, he’d treat her a little differently, which is very sad but it’s a good time to talk about that — it’s happening,” Gillies said. “Gender equality is a huge subject today so I think Fallon gets the short end of the stick because of that. Not that he’s any better to Steven but I know that if she were a man, she’d probably be the COO, no questions asked.”

Maybe Blake is still the same old Blake that John Forsythe played. Gillies is willing to give him the benefit of the doubt, at least for the first season.

“Maybe he knows something she doesn’t,” Gillies said. “Maybe it’s a father’s knowledge that she’s not old enough. Maybe he’s protecting her because he knows how dirty and ugly the business is and how many skeletons he has in his closet. I’d like to believe that. Otherwise, I think she’s worked her butt off and she probably has earned it.”

Dynasty premieres Wednesday, October 11 at 9 p.m. on The CW.