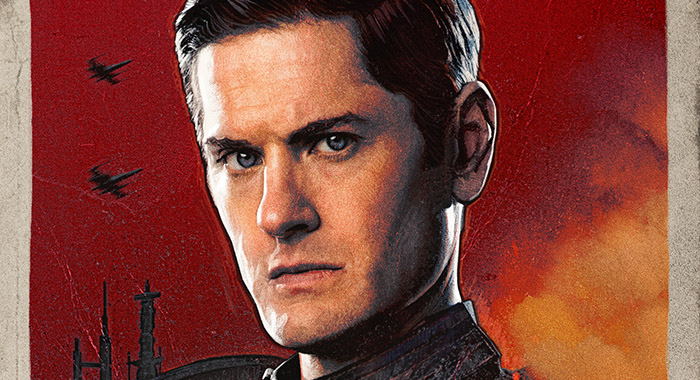 Although Andor’s ninth episode did not wrap up the current storyline of Cassian Andor’s (Diego Luna) imprisonment in an Imperial forced labor facility, it still offered a good look at who Syril Karn (Kyle Soller) is becoming. The disgraced corporate security agent may have found a way back to glory — a wish that extends well past the promotion he received for aiding Imperial Security Bureau Supervisor Dedra Meero (Denise Gough) last week. The character’s progress may, perhaps, be one of the most slow-burning elements in the slow-burn series, but he also has the potential to be one of most dangerous people in the whole of the Imperial era.

Of course, when Rotten Tomatoes talked with Soller about Syril and his ambitions, one lighter topic also came up: the character’s love of blue milk in his breakfast cereal and what it was made of on set.

“I didn’t ask too many questions because I didn’t want to scare myself off of it,” he said with a laugh. But in comparison to the icy and fruity concoction served at the Disney parks in California and Florida, the actor assumed it was “oatmilk with food coloring straight from Tatooine” — a flavor and consistency more appropriate for the most important meal of the day.

Beyond that on-set tale, Soller also discussed Syril’s belief in the Empire, the possible true nature of his character’s fascination with Dedra, and if anything could shake him from his allegiance to the Empire’s stated goal of order. 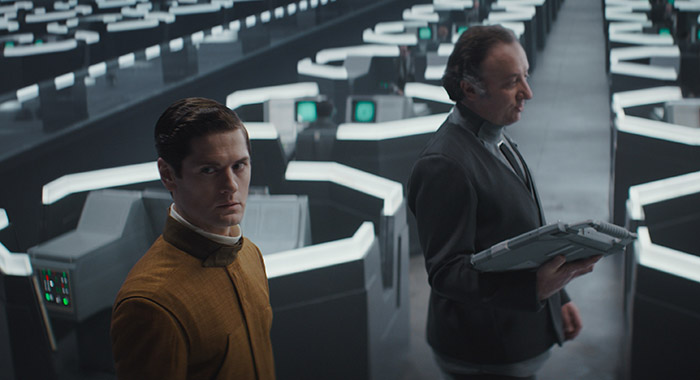 Erik Amaya for Rotten Tomatoes: Is Syril Karn a corporate fascist or just self-righteous to a fault?

Soller: Can I have a little of column A and a little from column B? His self-righteous belief [is formed] within his limited worldview and the constrictions he’s placed upon his own life and then the constrictions that actually growing up in a place like Coruscant, and in the toxic family environment that he grew up in, placed on him. He also believes he is destined to be a part of something “great” like the Empire, and it actually supersedes those little dolls he has on his bedside table that he’s dreamed about ordering around since he was a child. [It] definitely falls in line with this intellectual belief that the corporate fascist environment and system is something that is the answer to control and regulate society. And Syril’s core values — beliefs of rule and order and law, and really good tailoring – the circumstances of his life and his dampening of his own emotional antenna and social antenna absolutely primes him to exist within that structure. 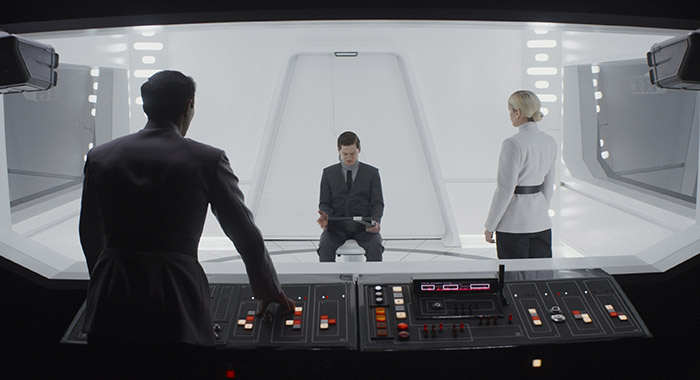 Does that mixture make him the most dangerous person we’ve met so far?

Soller: I think it definitely makes for someone who’s not necessarily in control, and that is something that we’re exploring with Syril. He has this deep emotional life that he keeps bitten down beneath his surface. Everything is zipped up into this perfect hairstyle, perfect clothing, and yet there is this massive, frustrated turmoil underneath. And that means he’s constantly at battle within himself, and he can’t really see five feet beyond him about how his actions are influencing those around him.

You only get a glimpse of that a couple times within the series, like in episode 3 when he has to speak to the troops on board the craft before they land at Ferrix, and the penny drops for him. And he is like, “Oh s—. Have I gone too far? This could really mess up.” And then it does go wrong, and then the veil lifts, and he sees what he has facilitated. I think that struggle, that war within himself, leaning towards that kind of unhinged possibility of seeing an opening and taking it [is] because he doesn’t think before he acts. Also, if the Empire tells him to do something, he will literally do anything, and that makes him the most terrifying. Not that he is, but in a way, [he’s a] suicide bomber.

It feels like he’s the deepest exploration of that mindset in any Star Wars story so far. Did it read that way to you in the scripts that this is an examination of someone who falls for that sort of ideology?

Soller: Yeah, that’s something that I was talking to [executive producer Tony Gilroy] about very early on: that the normalcy of Syril is actually what’s kind of scary about him. He’s just so primed to be taken over by a fascist organization and that quality of recognizability in this not-fully-developed man who is still struggling with all of these unmet desires and toxic upbringing and constricted societal experiences within Coruscant and no father. He’s got these holes that I’ve just been exploring in my own way that he’s trying to fill. And it was evident from the first chats with Tony and from all the early episodes I read, it was just right there on the page and [in] his words, which are so psychologically and emotionally accurate and kind of told me everything I needed to know. 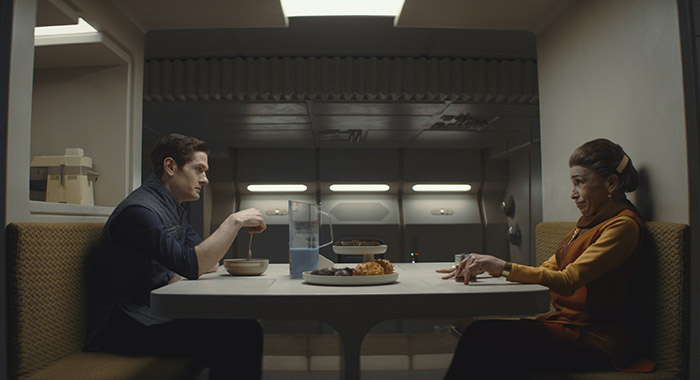 Not that the Star Wars galaxy can acknowledge earthly behavioral conditions, but is his mother, Eedy [Kathryn Hunter], a narcissist?

Soller: You think I didn’t Google “What is it like to grow up with a narcissist?” [laughs] Yeah. Yeah, 100 percent.

You mentioned that there wasn’t a happy childhood for him, but does he have memories of the Republic, or is that all too dim? Is it just too wrapped up in that awful childhood?

Soller: Yeah, he does have a few choice memories, but I what I was exploring with Kathryn — and we spoke about it a lot as well — is just what that lifestyle would’ve been like. They didn’t have much, actually. It might seem like they do because they present themselves in a certain way. There are a couple reasons why Syril will do his own tailoring; because it costs a lot [to get it done], but also that he can be bespoke and create an identity through that. But I and Kathryn saw that that whole period as being quite sheltered because we decided that his father left in a really difficult way, and that would’ve clouded that time period by Eedy just battening down the hatches and grieving a lot. 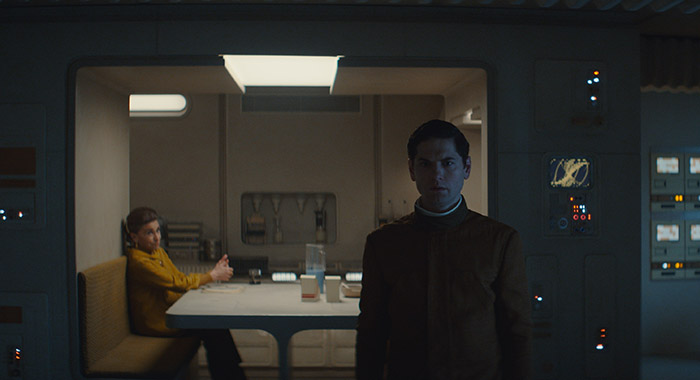 Since they are the first Coruscanti people we’ve really had a chance to see for an extended amount of time, are they indicative of, for lack of a better Star Wars term, the middle-class people that we find on that level of the planet?

Soller: I think so. For sure. Which is, I mean, you look at their surroundings and it’s pretty basic, and the sun hits his bedroom window for three seconds. Yet, at the same time, they’re not quite middle class. I think it’s hard to spot. But when Syril’s returning home in episode 3, he gets on the elevator. And you could go up, but it goes down. The further you go down, the darker it gets. So, they are kind of like lower middle class. Which is another reason why Syril needs a handout from Uncle Harlo. He’s such a f—up. But at the same time, that’s always been the way, because Uncle Harlo is from a different section of society, and it’s Eedy’s way of pulling her son out of the cutter. So coming from that real place of lack for Syril and Eedy, you can see psychologically why they are so biting and driven to succeed.

Have you taken a look at the guesses that fans are making about Uncle Harlo?

One hypothesis is that he’s another identity of Luthen Rael [Stellan Skarsgård].

Soller: Wow. Wow. Syril would love that in a way. 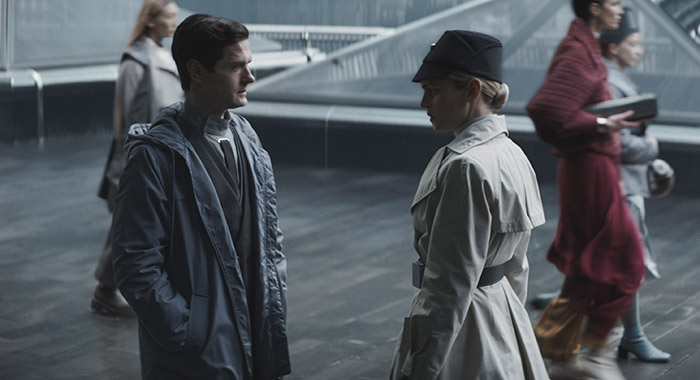 Before everything went down on Ferrix, did Syril aspire to a direct Imperial post, or was being in the corporate defense force enough for him? Was it just enough to be away from Eedy?

Soller: I think, at first, it was potentially enough to be away from his mother. But no, his aspirations and ambitions lie so much further down the line, especially when he was met with such a substandard kind of judiciary processes and his superiors [failing at the job in his eyes]. He doesn’t have delusions of grandeur, in a way; he feels he’s absolutely destined for greatness within the Empire because he has all the qualities that he recognizes that the Empire supports and rewards. He’s incredibly driven and he’s willing to do anything to get their attention and get their approval. And so when he meets Dedra, this fire is rekindled within him to be what he dream for within the Empire. He’s finally getting interviewed by somebody at the ISB and he’s at the ISB. That was a childhood dream of his, to be that far up and then to keep going.

And with Dedra, he sees a kind of twin flame in a way. He’s like, “Oh, you operate the same way that I do. You believe the same things that I do. You recognize that there’s this kind of burgeoning Rebellion going on. You see that Cassian is as dangerous as I believe he is.” And that is like, oh my God, complete justification of everything that’s happened already in the season. 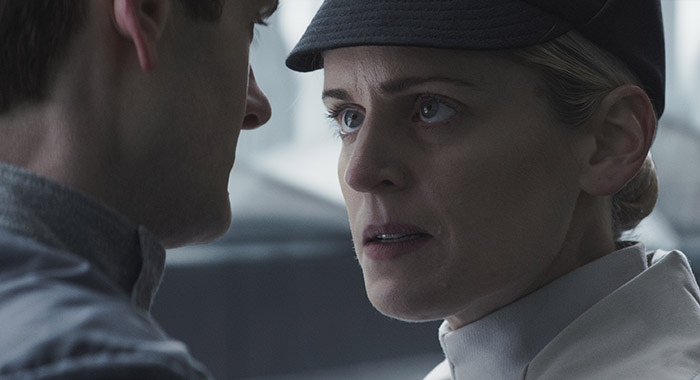 So, his fasciation or attraction to Dedra is still filtered through that Imperial ambition?

Soller: Yeah, I think he is fascinated with her because of the power that she wields and the control that she wields. At the moment, he sees her and his life does change. His life up until that point was like, “Oh my God, I’ve been sequestered into anonymity in this massive factory plant for human workers, and I’m going to be living at my mom’s for forever.”

And then it progresses into — I would never condone this at all, but as he starts to stalk her, it turns into an obsession because what she represents, the power that she has, he desires. And in a way, he desires to be her, or at least be noticed by her or to be with her. And that gets confusing. Syril, I believe, has never been in love before. He’s never had a girlfriend or a boyfriend before, he’s just so repressed. I feel he’s had experiences like that, but he’s always kept himself very removed from that because he’s spent his energy on trying to become the best possible guard dog for the Empire. He sees everything else is a distraction. 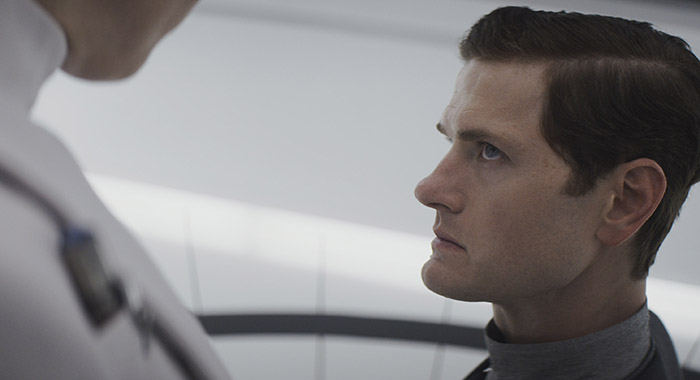 Is he the sort who could be swayed if someone like Luthen showed him the atrocities that the Empire’s committing? Or is he just that addicted to the Imperial philosophy?

Soller: It’s really hard to say for Syril because it has given him such an identity and a way of life. The system that the Empire holds is so strong, especially growing up in a place like Coruscant. It’s all around him and he’s literally dreamed of this since he was a kid. He knows that that would be valued in his mother’s eyes as well, and he is not developed fully enough to fully break that mother-son connection in a healthy way or to be a healthy adult.

I think what I was chatting about with Tony at the very beginning was I really wanted to know where does this guy end up in five years’ time? And Tony was like, “He could go here, he could go there.” That allowance to — and permission to — exist within that unknown territory and play this real turmoil within Syril of “could he be turned or is he a real devotee?” is actually such a refreshing, honest, and truthful portrayal of a person who’s wrapped up in this life. [But] it is still a question mark for him.