To be “woke” is to be aware of racial injustice and work for change, and new Netflix series Dear White People uses comedy and drama to help its audience get there. Justin Simien created the show based on his own Certified Fresh debut film of the same name about the lives of black students at a predominantly white Ivy League university.

“Dear White People” is also the name of the college radio show that Samantha White (Logan Browning) hosts, in which she clues in her white classmates on their contributions to racism. Does she actually have to tell a fraternity not to throw a blackface party? Lionel (DeRon Horton) covers it for the school paper. Student body president Troy (Brandon P. Bell) works the official channels and Coco (Antoinette Robertson) supports by any means necessary from protests to elections.

Simien and Browning spoke to Rotten Tomatoes by phone before the premiere of the 10 half-hour episodes. Here are eight ways Dear White People stays woke about social issues that affect everyone in 2017. 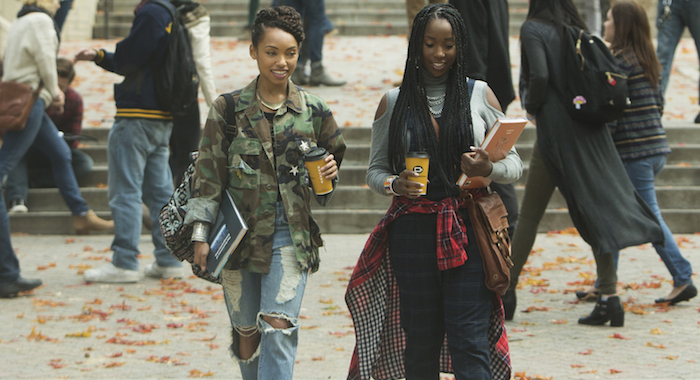 Simien knows that the way to get people to pay attention to racism is to make them care about people who suffer it.

“If you just watch the show from an entertainment perspective, I think that you’ll be invested in these stories,” Simien said. “You kind of can’t help at that point then be open to the conversation.”

Fans of the movie get to see Sam, Lionel, Troy, and Coco again, even if they are played by different actors on the show. (Bell reprises his role.)

“I wasn’t done with them,” Simien said. “There was so much more to say about all of them at the end of the movie. I really never considered rebooting it or doing it with different characters.”

The blackface party happened in the movie, but the show takes it in new directions.

“At the end of the movie, Sam physically let her hair down,” Browning said. “She finally was at that point of I can let go. I can be me. At the end of season 1, Sam is not at that place. I don’t know when she would get to that place.”

2. IT HAS EMPATHY FOR OPPOSING VIEWS 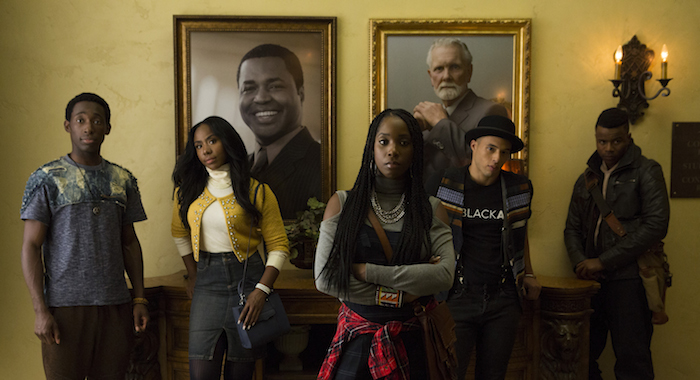 Each episode of Dear White People is told from a different character’s perspective. Viewers are bound to identify with someone, and if they disagree with certain characters, Simien hopes to present those characters with empathy.

“I think that for every point the show makes, there’s a counterpoint,” Simien said. “The reason for that is because the truth is messy. Racism is really messy. It’s not black and white, pardon the pun. It’s a very complicated issue that’s really hard to dissect and if we pretend it’s simple or easy, we’re really not going to get very far.”

Even Sam can be wrong sometimes. She assumes a black caller to her radio show is white because of his voice and his point of view.

“I think that’s part of what the whole show is about,” Browning said. “You can be both. What is right? What is wrong? And assuming. That was assuming on Sam’s part based on what he said, based on how he sounded. Sam can be prejudiced and have biases and she does.”

3. IT KNOWS THE R-WORD IS TOUCHY 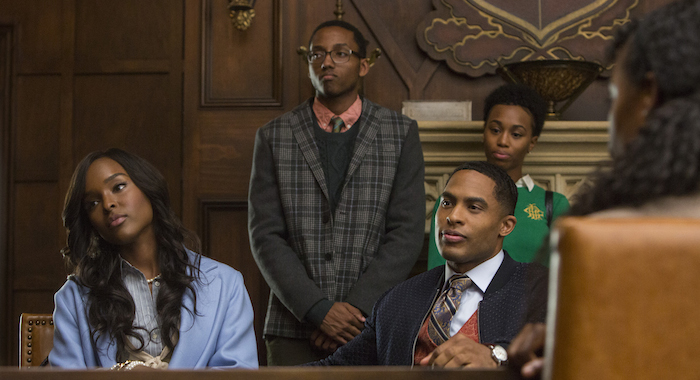 Touchy conversations about racism get even touchier when someone is accused of being racist. An episode of Dear White People demonstrates people getting defensive about it when they were trying to help.

“I do think it’s a lot of people with really good intentions,” Simien said. “There are absolutely racists out there and bigots, but there’s also just a lot of poorly informed people who mean well but don’t know how to do better. To try to portray those people with empathy as well is important. If we’re going to get someplace else, we have to see all those little mistakes that we’re not aware of that bring us to these results that we don’t like as a society.”

Browning herself couldn’t remember ever calling someone a racist, but she speaks out against racist assumptions and comments, which often leads to explaining what exactly racism is.

“The conversation I have more often than not is the argument about the idea of reverse racism,” Browning said. “That argument dwindles down to defining racism. Racism is defined differently by many people. It’s also that thing of not wanting to own the history of our country because we all have to. No matter what race you are, we function by understanding the nation’s past.”

4. IF YOU FEEL LEFT OUT, DEAR WHITE PEOPLE HEARS YOU 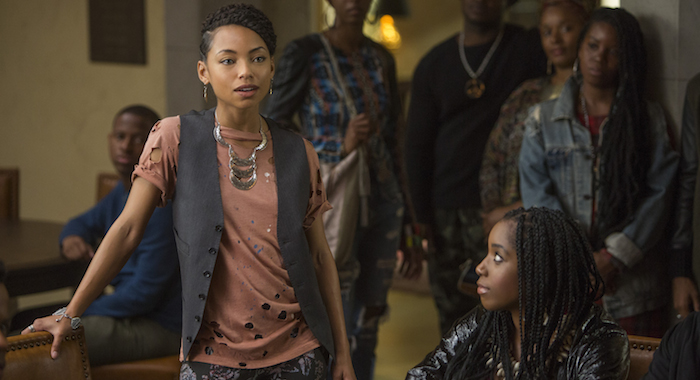 In speaking out for the rights of black students, Sam finds that other people want to protest their own perceived injustices. Browning herself had empathy for people who wanted to appropriate civil rights protests for themselves, but asserted this is not about them.

“No one thinks that just because you’re white, you don’t have to struggle,” Browning said. “Everyone understands that. Everyone in this life has some kind of turmoil. It’s one thing. Why would you want to claim this thing that’s been the death of so many people? Literally, racism has been the death of so many people in this country. Why do you now want to claim that it’s being reversed on you?”

Browning feels it would be counterproductive to begin every conversation about racism with the assurance that she understands everybody suffers too; however, she’s willing to occasionally remind people she understands.

“If I’m doing interviews for Dear White People, it doesn’t hurt every now and then to throw in something that is reassuring because we’re human,” Browning said. “We do need to be reassured and comforted, but it doesn’t need to be every time.” 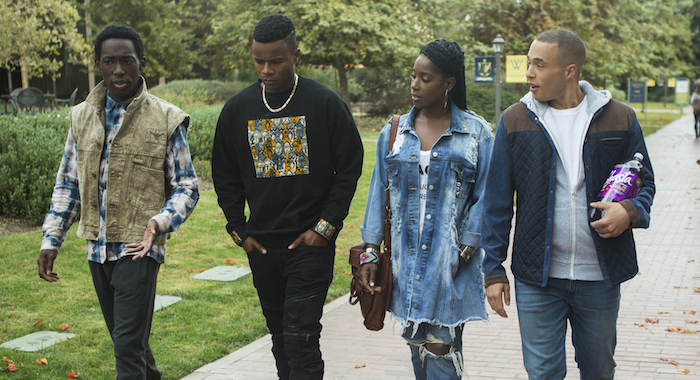 In 2017 people have more tools than ever to communicate, but is just speaking out enough? The characters of Dear White People have to “figure out how to be activists in the 21st century,” Simien said.

Browning elaborated on the different angles each character proposes.

6. IT TACKLES POLICE VIOLENCE, EVEN ON CAMPUS 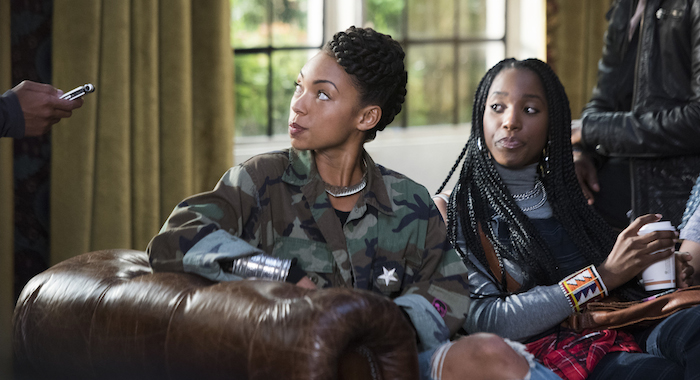 “It just didn’t feel right to do this show without talking about those things,” Simien said. “No matter how much money you have or level of access or education, at the end of the day being black is still fatal in certain parts of this country. Things can always escalate no matter who you are. The fact that you are a member of an oppressed group does affect you differently than it affects other people.”

“The whole show felt real but actually filming the [campus security] scene was almost traumatizing,” she said. “We took a lot of breaks and it was very heightened for everyone to film. I don’t think that any of us were the same after.” 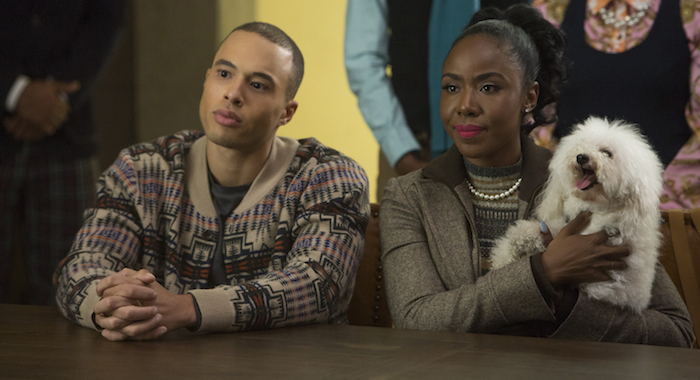 On an Ivy League college campus, the families who make the biggest donations often get to influence policy. That’s true of both the black and white elite.

“We were fascinated in the writers room by how much finances really do drive not only the college experience but the American experience,” Simien said. “There really is a financial interest in keeping systemic racism alive. It really does benefit people. Whether they know it or not, there are a lot of people out there who are encouraging the system so that they can stay rich.”

8. THEY’RE READY FOR THE HATERS 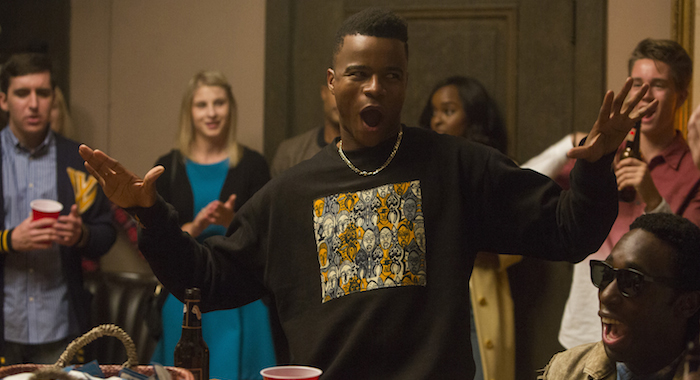 Simien wrote an articulate response to commenters protesting the name of the show. He’s ready for anything that comes his way once the show airs.

“I find them interesting and I find them sad now,” Simien said. “It doesn’t sting as much because you just realize how much people need to hold onto their hatred.”

Haters might just be giving Simien material for season 2.

“Honestly, as a storyteller, I find it fascinating,” Simien said. “I think that the internet world of the alt-right is both frightening but also really rich in terms of a storyteller and a satirist, of mining things about the culture to tell stories about. It is hurtful, but it’s also really interesting to me. It definitely emboldened me in terms of why I made the show and why I want to continue doing the show.”

Browning too is ready for volatile conversations. Of course, the more people Dear White People reaches, the better, but every single person they reach will be worth it.

“You can’t diminish conversations that come out of these serious topics,” she said. “Even if it’s just three people, that conversation still matters. You don’t know which one of these three people may go on to be a senator or a politician or start a foundation.”