Vagrant Queen: Your New Guardians of the Galaxy-Style TV Obsession

Vagrant Queen is the sort of irreverent, emotional, and fun space series that Syfy has been lacking for some time. The series stars Adriyan Rae as Elida, a scavenger in the wilds of a distant galaxy (not ours) with a big secret: She’s the deposed heir to an intergalactic kingdom under the boot of a tyrannical Republic. Think of it as the Commonwealth of England with masked storm troopers instead of Oliver Cromwell and his forces. They’d love to see Elida dead. Meanwhile, a group of loyalists hopes to restore her to the throne. But Elida’s position on the matter is quite clear: She wants nothing to do with it.

It is the sort of premise fan-favorite shows are built on, and it was the result of the slightly more serious comic book by Magdalene Visaggio and Jason Smith. And for Rae, reading that original comic was key to preparing to play Elida in the series; in fact, she read it prior to the audition to get into the character’s headspace.

“I loved Elida overall, just how she was fleshed out and her thoughts and she clicked with me instantly,” she told Rotten Tomatoes recently. “She feels as though she has to always be the rock for everyone. But she’s someone who had to grow up fast, which is exactly like me.”

Some actors prefer to wait to read the source comic – particularly if it is more recent or lesser known. But in Rae’s case, it was important to get to know as much about Elida as possible. And that created an immediate connection for her: “She’s very important to me,” Rae said. 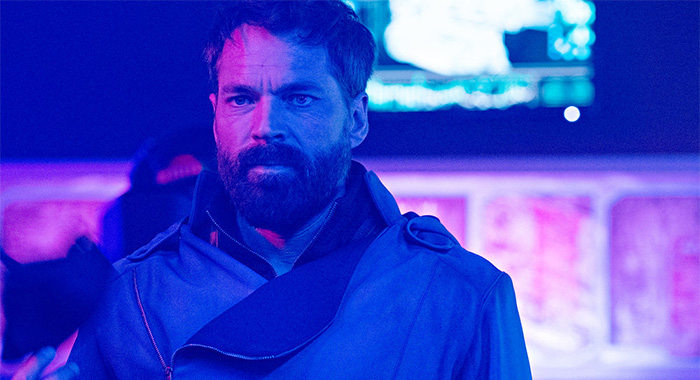 Rae’s co-star Tim Rozon couldn’t wait to read the comic once it came on his radar. Like her, he read it before the audition and felt it helped him get the part.

“For my screen test, I made sure I had orange-reddish hair color to match [the character] from the comic book,” Rozon said.

His character, a stranded Earthman named Issac who serves as Elida’s “goofy sidekick,” may seem somewhat familiar to fans of Rozon from Wynonna Earp, in which he plays Doc Holliday — which is to say, there’s a bit of a scoundrel to Issac.

“I haven’t felt so right for a part pretty much since Doc Holliday,” Rozon said, although, “Doc can be pretty intense, whereas Isaac is just a bumbling fool, and I feel like I’m a little closer to that at times.” 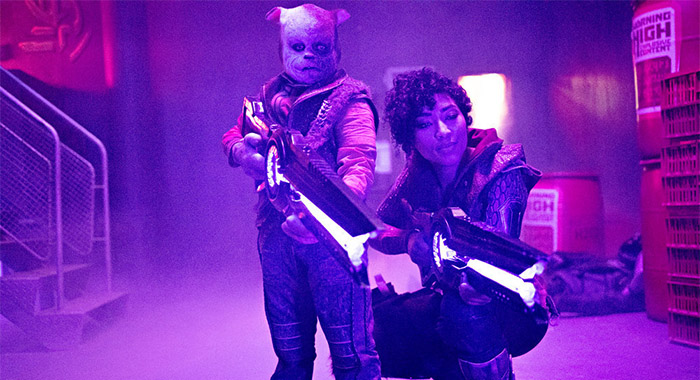 Also like Wynonna Earp and other Canadian-produced sci-fi shows, Vagrant Queen likes to play fast and loose with its tone. It can feature a bombastic, heroic slow-mo shot and immediately segue into a joke. It was one of the appealing aspects both Rae and Rozon found when the ready the pilot script.

“I love the dynamic of it,” Rae said. “Everyone usually chooses, ‘Oh, this is comedy, we can’t have these heavy drama moments.’ Or ‘Oh, this is drama, we can’t have it that funny.’ But I love that we choose where we need to put that comedy, and we choose where we need to put those heavy moments to make it realistic and make you invested in the character storylines. I love that we do it all. It kind of gives me a Guardians of the Galaxy feel when it comes to adding all those aspects into one.” 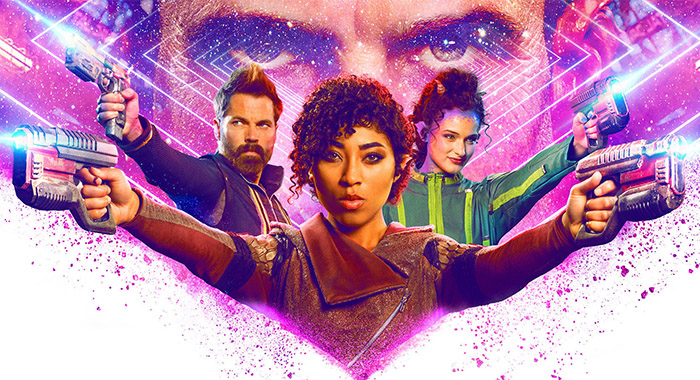 Viewers will see that from the first episode, which introduces Elida, Issac, third major character Amae (Alex McGregor), antagonist Lozaro (Paul du Toit), and a host of secondary characters who come to life almost immediately — if, in some cases, just to be quickly knocked off the board. And as some of these guest characters matter to the main three, they, like Rozon’s Issac, “use humor a lot to deflect feelings and deal with feelings.”

But then, he felt the more fluid tone – which he described as “heart, humor, and hectic” — is essential to the show.

“It’s got to have that right mix,” he said. “All of that is a testament, in my opinion, to [showrunner] Jem Garrard. This lady is a powerhouse. She is incredible.” 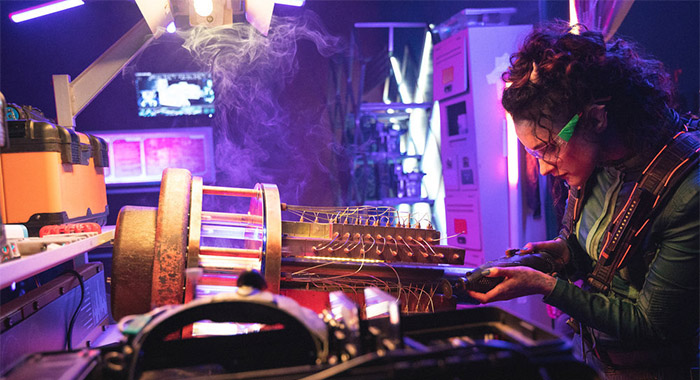 Garrard, who previously produced Android Employed, came to Vagrant Queen with an intensity and built out from the comic book’s initial six issue run, creating new situations fans of the book will begin to see as early as the pilot and a new major character with Amae. Introduced as the sister of one of Elida’s favorite bartenders, she joins the group as they are in bad need of an engineer and, so it seems, a mediator. “She is the glue that keeps [Elida and Issac] together because they are literally polar opposites,” Rozon said.

Although, Rae believes theirs is “just a real-ass friendship where people are on their individual journeys and they do stuff for themselves, not necessarily thinking about the consequences or repercussions for others.”

The nature of Elida and Issac’s friendship is another departure from the comic — where they seemed more like very uneasy allies — but as Rozon pointed out, the television series has more time to flesh out their shared history than the six-issue comic. He also thinks the comic book characters have as tight of a bond as their television counterparts. But what about their constant verbal sparring? “You can only be with your real friends when you call your real friends out, you know what I’m saying?” he said. 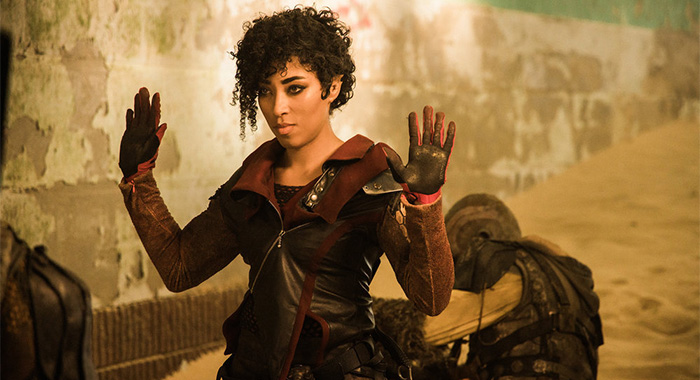 Of course, there is a reason they’re on each other’s last nerve when we meet them. Elida stole Issac’s ship last she saw him, and, last time he saw her, he was literally shooting her in the back. It should be a friend-ending moment, but when you see the ship in question, the Winnipeg. It will all make sense.

Like all the great sci-fi shows, the Winnipeg serves as the program’s signature environment. It is both stylish and rough-and-tumble all at once. Perhaps smaller than the Serenity of Firefly or the Raza of Dark Matter, its faded walls, messy floors, and quirky layout will remind some of a long lost, but favorite spaceship toy from childhood. And, as Rozon told us, it is named after one of Canada’s toughest towns.

The set itself is one continuous piece, allowing scenes to play out from the command module out to the loading dock or the individual rooms. And that sense of verisimilitude made it real easy for the actors to get into character.

“This is it, man. This is the dream. This is what I signed up for,” Rozon said. 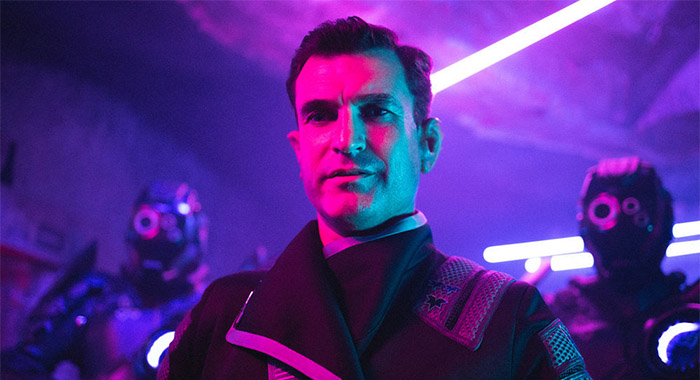 Although, not everything in the Vagrant Queen galaxy can be a dream. Elida is still running from her noble birthright and a government hellbent on seeing her dead. Or, at least, it seems like that’s what they want. Their representative, Lozaro, may have his own reasons for chasing Elida. The two also have a history, but initially, flashbacks will be the only time we see him interact with her, as he is often two steps behind her or sequestered on his own ship.

“It seems like he’s in a different version of the show, but really he’s just in his world, thinking his own little thoughts that he thinks are so legitimate,” Rae said of the character. Consequently, Lazaro’s scenes are some of the funniest, aided, of course, by the silliness of his Republic guards.

The show goes out its way to give the guards little bits of character even as they are stuck in restrictive black armor. And to give you a little more of the show’s flavor, it wasted no time putting all three main characters in those costumes.

“They’re terrible,” Rae joked. “They look great but they are the worst costumes!”

“There’s one [eyehole], but it’s in the forehead area,” making it almost impossible to see and stunt work comical, she recalled.

“You can’t gracefully walk around in them,” added Rozon, who also teased that videos of the group working in the costumes will surface at some point. Despite the difficulty of working in them, he said, “we had a lot of fun in those costumes.” 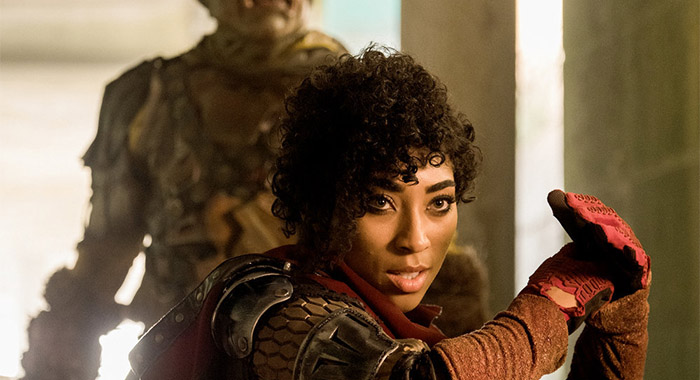 But the fun to be had with the overt goofiness of Lazaro and the Republic guards is offset by the more serious elements of the Republic as the show’s antagonist force and the internal jeopardy for Elida — as much as she doesn’t want it, she was trained to be a queen. To Rae, that interior conflict (and its outward manifestations) may be the most salient aspect of the show.

“I understood why she wasn’t overly aristocratic because all of the monarchy, all of these aspects of her life had stopped her from understanding her true self,” she said. To put a finer point on it, “Elida” isn’t even the name she was born with, but Rae maintains it is the character’s true name no matter what the loyalists out in the galaxy might think.

“Yeah, I wouldn’t like [the loyalists] either,” she added. “So it was pretty easy to click into that.” Nonetheless, her past is something she will have to face at some point. 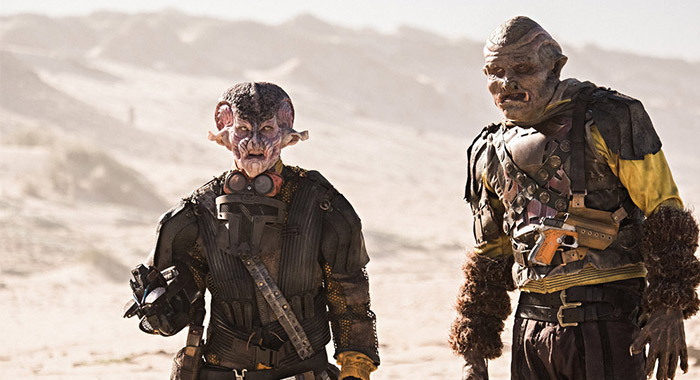 “All of these things will be answered for you by the end of Vagrant Queen,” Rozon teased. “Jem’s also really smart at setting things up. Everything’s going to get dealt with.”

Which, presumably, includes how and why Isaac ended up in deep space and Lozaro’s real reason for chasing Elida.