The Terror Is Definitely Not a Bear, and 6 More Fun Facts Learned From the Stars and Trailer

Tobias Menzies and Jared Harris reveal that there's more than one horror in their new AMC series and talk Outlander and Carnival Row.

AMC’s new series The Terror is about the lost British Royal Navy’s Arctic voyage in the mid-1800s chronicled in Dan Simmons’ 2007 historical novel. The novel suggests that it wasn’t just the elements that claimed the crew — the elements had help from a monster.

The trailer for AMC’s series pretty much rules out a bear. The Terror is totally not a bear. “The Terror” is also the name of the ship that got lost at sea, so it has a double meaning. 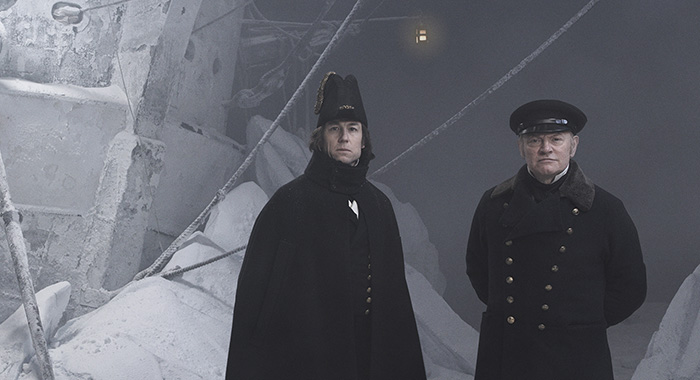 The TV adaptation’s stars Tobias Menzies (Game of Thrones, Outlander) and Jared Harris (The Crown, Sherlock Holmes: A Game of Shadows) spoke with Rotten Tomatoes recently about the series. Harris plays second in command Francis Crozier and Menzies plays officer James Fitzjames. With their insights and the new trailer, here are seven things to know before The Terror sets sail on AMC in March.

1. YOU WILL SEE THE CREATURE EVENTUALLY. 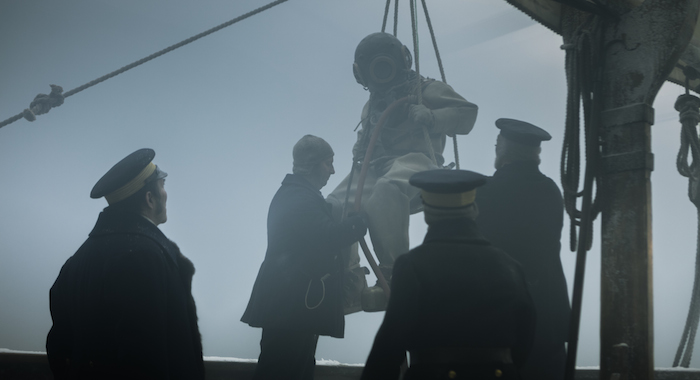 Now that they’ve ruled out bears, Menzies and Harris could speak freely about the creature. Yes, it’s a monster, but it’s scarier when you don’t see it.

“Definitely we ascribe to the adage, don’t show the monster,” Menzies said.

So, come to The Terror for the creature. Stay for the drama.

“It’s also not a creature feature either,” Harris said. “That’s not what the idea of it is. The idea is: Is there a monster and what is it? There are several monsters in the story.”

There is literally a monster, but Menzies added that there are human terrors, imagined terrors, and more.

“It’s more psychological in that way and more a meditation on The Other,” Menzies said, suggesting that there are conflicts at work more insidious than the actual creature.

2. THE BRITS SHOULD’VE LISTENED TO THE LOCALS. 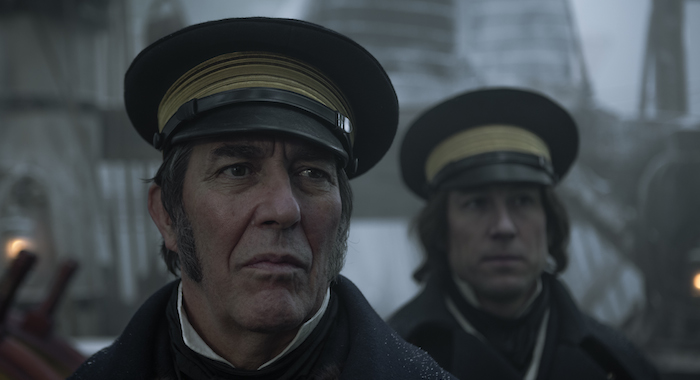 You saw the Inuit woman in the trailer. That’s Lady Silence (Nive Nielsen), who comes across the British ship with her father. These officers think they’re gonna take over the Arctic. If they’d just listened to the Inuits, they might’ve had a chance.

“Part of the idea of the show is this clash of societies,” Harris said. “There’s British culture and there’s Inuit culture. We bring our arrogance with us thinking we are the masters of the world and we are sophisticated, cultured, and more evolved and advanced. And [we] fail miserably to survive in a place that they’ve survived in for thousands of years.”

“In that early Victorian period, they consider themselves morally and spiritually superior,” Menzies said. “So they encounter indigenous peoples, and they really believe that they are better. That’s one of the blindnesses that unpick us out there. There are people we encounter in that place who could’ve saved us.”

3. IT WAS ACTUALLY BLISTERINGLY HOT FOR PART OF THE FILMING.

When The Terror filmed in Budapest, the temperatures were appropriately Arctic. When they got to Croatia, that’s when the acting had to kick in.

“We had some very sweaty days on Croatian islands where the sun was beating down and we had to pretend to be freezing our asses off,” Menzies said. “They had to come in and mop us down between takes.”

The trailer shows the scene where Crozier’s spyglass sticks to his eyebrow. Harris isn’t quite sure how they did that, but he felt it.

4. THE BOATS CROSS WATER, EVEN WHEN IT’S FROZEN.

The trailer showed a glimpse of the crew dragging boats across the ice too. They don’t have to pull the entire Terror across the ice, but they don’t get to stop just because the water froze over.

“The crazy thing they do is they have to abandon ship and they put all of their supplies in these boats,” Harris said. “Although at that point they’re stuck in ice, they at some point expect to reach open water, and they will have to have boats to cross it. So they have to drag these boats with them and haul them up and down glaciers and everything. It was just insane what these people did.”

Dragging the boats was a last resort. They would try to blow paths through the ice if at all possible.

“They had all these techniques to try and open up channels in the ice,” Harris said. “One of them was just to put down coal dust because the sun would focus the heat onto the black coal dust. That would create enough heat to start to open up fissures in the ice. As well, they put dynamite down and then hack away with great big ice saws.”

5. THE CREW MEMBERS ARE ANOTHER TERROR. 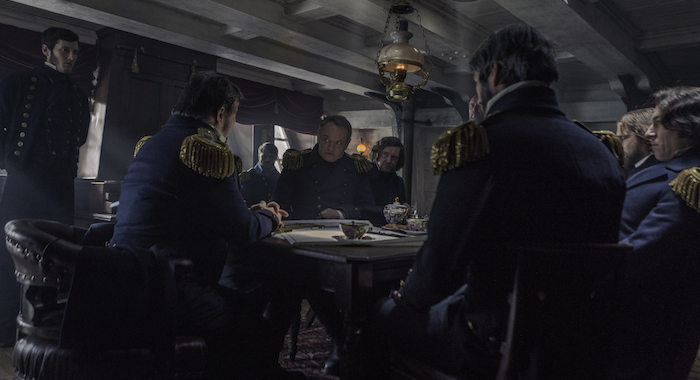 As if creatures, ice, and conflict with the locals weren’t enough problems, the captains had to contend with their own crew. At first, corporal punishment does the trick. Crozier whips a sailor to make an example out of him. Once the crew sees a creature, will they really defer to their human captain?

“Controlling that number of men in such a small space was a huge issue,” Menzies said. “It was probably the main preoccupation of a captain.”

There are Marines on board The Terror to protect the captain. When you watch the show, pay attention to the layout of the officers’ quarters.

“The entrance to the officer’s quarters, there would be a Marine posted at the beginning of that corridor and then by the great room,” Harris noted. “There’d always be an armed guard there.”

They also made sure the armory was not accessible to crew members, lest they mutiny.

“The weapons that they had would be accessible through a trap door in the big great room near the captain’s cabin,” Harris said. “It would be locked on the other side underneath the ship. The first thing they would go for — the sailors, if they were going to mutiny — was they’d go for the arms room, the weapons room. The idea was the officers would always have a quicker route to the firearms than the sailors would have.” 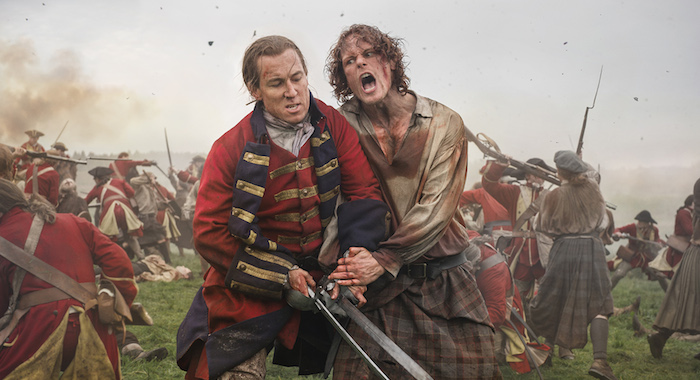 Fans of Outlander were sorry to see both Black Jack Randall and Frank Randall go. If they read the books, they knew it was coming, though. So Menzies was on the lookout for a new role.

“Yes, my exit from that show was in line with what’s in the books,” Menzies said. “Obviously, I did the best part of four years on Outlander. It was a big part of my life. I consider them real family, but I was ready for new adventures. This is the show that came along next. I feel very proud of what we made, and I’m really excited to show it to people and see what people make of it.”

Actually, Menzies got a few extra episodes out of Outlander.

“There was some talk, at some point, all that stuff might’ve been at the end of the second season,” Menzies said. “They hung it over and did it the beginning of the third.”

7. HARRIS HAS ANOTHER PROJECT LINED UP: CARNIVAL ROW. 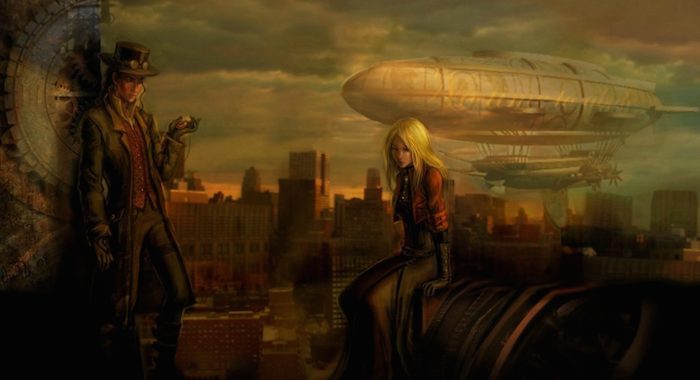 Harris already has another show lined up: Carnival Row, an original fantasy series for Amazon. Set in an alternate world with only two continents, Harris plays Absolom Breakspear.

“I’m the political head of this one city state that’s fighting for control over this new land we’ve discovered with all these riches and all these amazing, fantastical creatures on it,” Harris said. “They’re all fleeing from the war and coming over to our continent. Of course they’re taking work and jobs away from the people, so there’s this whole pressure of immigration if you like. I’m the capitalist pig basically.”

With its topical social issues, maybe Carnival Row isn’t such a fantasy — except for those mythical creatures in it.

“All fantasy is an allegory,” Harris said. “It’s set in the kind of Industrial era, Victorian era. The closest parallel you could make would be the European discovery of the New World, the Americas. Using the Native Americans to fight proxy wars between the European powers, but they’re not Native Americans. In this story, they’re fantastical creatures like centaurs and fairies and kobolds and all these different fantasy creatures.”

Carnival Row is expected to begin filming this year to premiere on Amazon in 2019.

The Terror premieres March 26 on AMC.