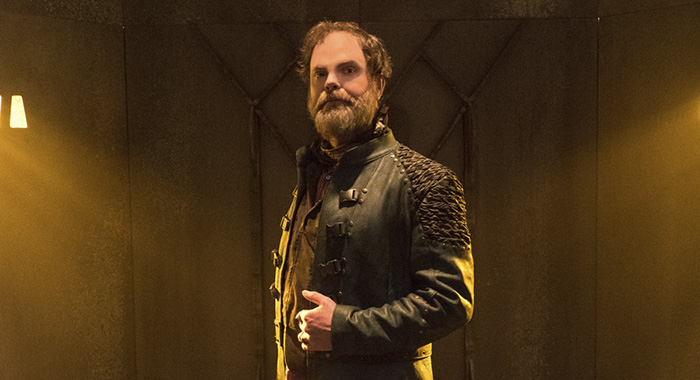 Rainn Wilson, who has made an art of portraying social misfits — example A: his Dwight Schrute from The Office — takes on another difficult personality in Star Trek: Discovery’s Harry Mudd, who first appeared in the Star Trek universe in a 1966 episode of The Original Series.

Back in 2256, Captain Gabriel Lorca (Jason Isaacs) and Starfleet Lieutenant Ash Tyler (Shazad Latif) got a bitter taste of Wilson’s younger Mudd when, while imprisoned with him in episode “Choose Your Pain,” Lorca discovered that Mudd had been spying on them to curry favor with their Klingon captors. That revelation was in addition to Mudd assigning his own torture to a wounded Starfleet officer in a hideous corruption of the “pay it forward” concept.

Lorca very intentionally left Mudd behind when he and Tyler busted out. Mudd’s last words rang through the halls: “You can’t walk away from me, Lorca. I’m coming for you. You hear? You haven’t seen the last of Harcourt Fenton Mudd!”

It appears Lorca’s day of reckoning has arrived in Sunday’s episode “Magic to Make the Sanest Man Go Mad.” The episode preview reveals that the Discovery crew gets caught in a time loop with Mudd making a very conspicuous appearance in the trailer.

Rotten Tomatoes spoke with Wilson this week about the series’ renewal for a second season, taking on the Mudd legacy, and what the future might hold. 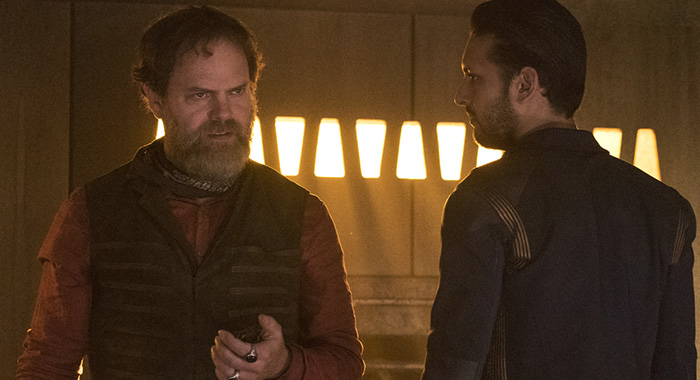 Debbie Day for Rotten Tomatoes: I was excited to hear the news about the season 2 renewal.

Rainn Wilson: That’s fantastic. The show’s terrific, and fans are loving it. I’m really excited to see what happens.

RT: I noticed in the next episode’s preview that you make an appearance. So is this going to be a big episode for you?

Wilson: Yeah, this is a big episode. Harry Mudd visits the Discovery. He, obviously, was not so happy being left behind in a Klingon prison. So I imagine some sparks are gonna fly.

RT: We asked some of our Facebook followers to submit some questions for you — that OK? 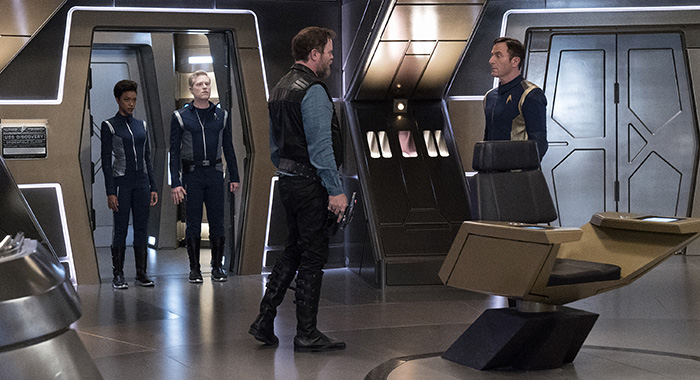 RT: The first one is from Brad Turner, who asks, “How much backstory did you have to prepare for such an iconic role? Did it worry you about taking on this huge character, and what did you add from your own acting repertoire to make the role yours? PS: Love you in this role. Thought you nailed it perfectly. Hope we see more of Mudd with you in the role.”

Wilson: Yeah, that’s nice. You know, I grew up watching Star Trek, and I loved Harry Mudd from the get-go. I was probably six years old when I saw my first Harry Mudd episode. And that’s really no exaggeration. I love what Roger Carmel did in terms of his kind of both flamboyance and comedic-but-deadly at the same time. I love that combination. I’ve been excited to play with my own version of that.

When I spoke to them — we had a conference call about Harry Mudd when they first offered it to me — and the writers and producers were like, “Listen, this is a modern-age, this is a real Harry Mudd. He’s got to be a real, flesh-and-blood character. He’s got a backstory — he’s got history. He’s got to have an edge to him for it all to work.” So I knew that this would be a great opportunity for me. I was really excited to dig into that, you know?

Part of what I do as an actor with any role that I get is like, “Well, why should I be playing this role? What can I bring to this role that’s special, that no one else can bring?” I think every actor kind of has to do that to find your way into how you would play the role. I don’t know what that is, exactly, but that combination of the theatrical and the dangerous was something, the dynamic I was really excited to play with. 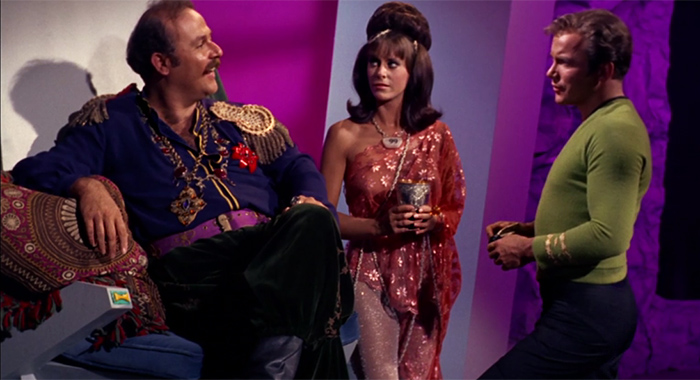 RT: Tom Spillman asks, “What is the most interesting part of playing an iconic character, where you have more screen time than the original, yet you have to lead us to those plot points?”

Wilson: One of the great things that the writers did was really flesh-out some backstory for Harry, which we saw in “Choose your Pain.” We got to see that he’s madly in love with Stella, that his courting her has been quite an endeavor. He bought a moon for her. That she’s got a powerful father that he’s trying to appease. We also see his resentment at the Federation. And he has some very different ideas.

He’s one of the rare kinds of civilian characters. So it’s kind of an insight into — you know, there’s the Federation and there’s Starfleet, but then there’s billions and billions of people that they’re overseeing, and we rarely see that in the Star Trek universe. That’s also an interesting insight as well. I like that he has this resentment at the Federation, and that probably a lot of people do, down on these planets, that are following rules that they don’t want to follow. 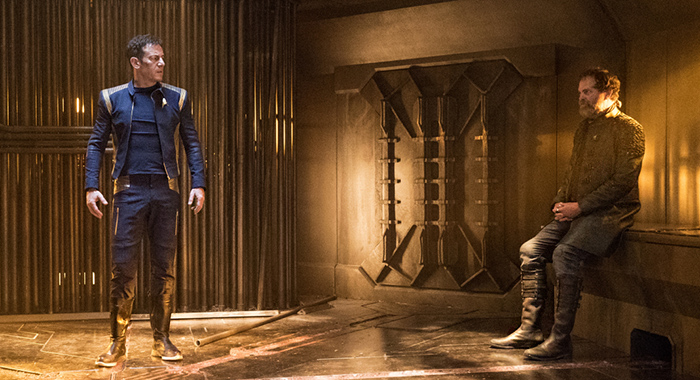 RT: That leads me to my own question: The love story Harry Mudd tells — is that true or false?

RT: Since the love story is central to his personal mythology or truth — depending on what that is — could you name three pluses to Harry and three minuses to Harry. Are there good parts of his personality?

RT: His being a survivor is one thing that we know is fact.

RT: Surely we’ll be seeing him in season 2, right?

Wilson: I haven’t gotten any word about that, but I would love to be involved in season 2. I really would. I hope they’ll bring him back. 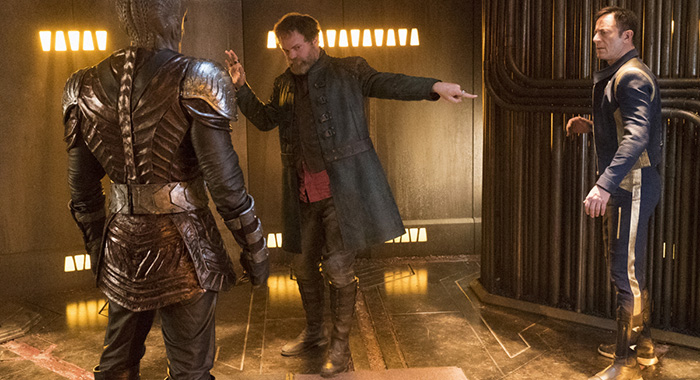 RT: If Harry Mudd was a real person living on Earth today, what would his lifestyle be like? Can you compare him to somebody real living today?

Wilson: I think that Harry Mudd would be — I think [former White House Chief Strategist] Steve Bannon would be a great comparison.

Wilson: Yeah, maybe, I don’t know. That’s one way to go with him. Some conspiracy theories — Remember, Steve Bannon worked in Hollywood. He’s an author, he’s on boards, he tries to make money however he can. A scrapper without any morals.

RT: But his ideology wouldn’t be anywhere near Steve Bannon’s though, would it?

Wilson: No, he would not. He doesn’t have an evil ideology, though I don’t know if you could call Steve Bannon’s ideology evil. He’s just trying to get by for himself and to do whatever it takes to make a profit and take care of him and what he has.

RT: He’s a con man. Does he live well? I mean, other than being imprisoned in a Klingon ship?

RT: I was going to ask you if you could name three ways you and Harry Mudd are similar, but I think you already mentioned it: charming, devilishly handsome, a survivor — right? 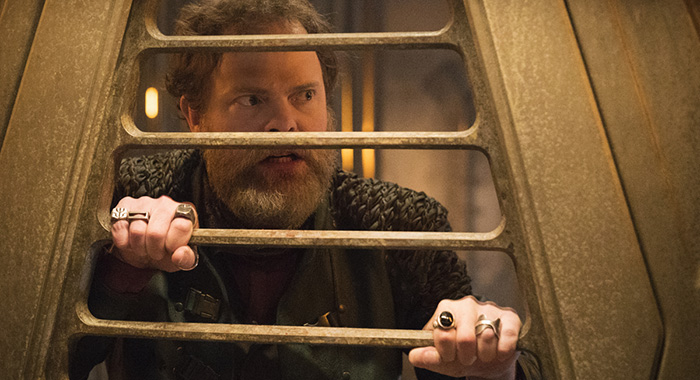 RT: It’s hard to ask specific questions about Harry Mudd because we’re discovering him as the episodes go forward, and that discovery is so enjoyable. What can you tell us about him other than what we’ve seen so far?

Wilson: Well, I think in the next episode, you’re gonna see some other colors to Harry Mudd that we’ve never seen before. That will be very exciting. There’s nothing really I can tell you, except in this next episode, you will see Harry Mudd use a transporter, sit in the captain’s chair, and fire a phaser. So there’s gonna be a lot to see. There’s gonna be a lot to learn.

RT: About Harry Mudd, who is …

RT: … charming and devilishly handsome and a survivor — and out to get Captain Lorca. That was a life-and-death situation for Harry. Is he looking to do more than mischief? Is he out for blood?

Wilson: Well, you saw him screaming, “You haven’t heard the last of me!” while locked in a Klingon prison cell with blood coming out of his face. So I think the stakes are quite high for Mudd. Yeah.

RT: Is he a sociopath?

Wilson: He’s a capitalist. I think all capitalists are part sociopaths. As in anything for the bottom line.